Sad to hear of Al Kaline's passing last week. Great player and by all accounts a great guy.

While he's not a full-fledged "PC guy" of mine at the moment, I do like scoring vintage Kalines when the price is right. (Modern Kaline cards I end up with typically get sent out to a Tigers collector such as Dennis or Julie.) And of course being obsessed with Topps Retired Signature Edition-- the autograph-forward card line Topps put out from 2003 to 2005-- I've got some nice Kaline cards there. 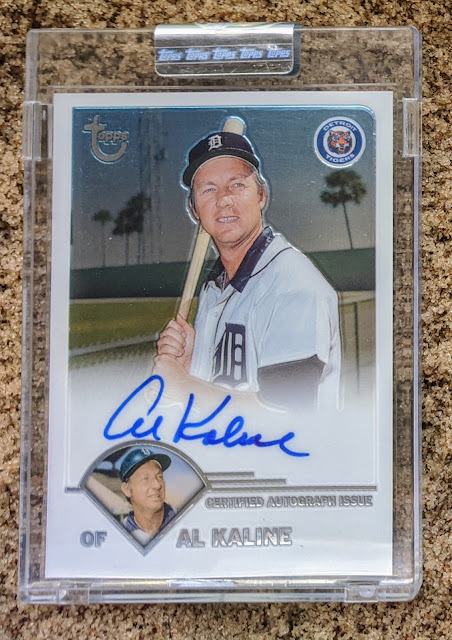 This 2003 Topps Retired auto popped up on eBay the very day Al passed away. You're probably thinking some opportunistic seller was looking to make a dirty buck. But the crazy thing is the card was listed at a great Buy-It-Now price! Like a third of the price that the same card sold for at auction just a month prior! I snatched it up just as quickly as I would have were Mr. Tiger still with us. So if the seller was trying to be slimy and "cash in" on the death of a legend, well.. I don't know what to say about that. All I know is I got a good deal on a card I wanted.. on what just so happened to be the same day the player died. 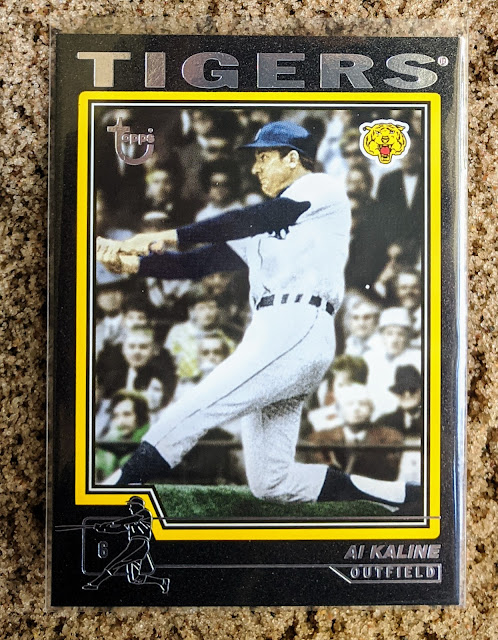 So, since the '04 autos are black, I bought this "black" (I call them "charcoal" as they're not truly black but more of a spotty dark grey) parallel of his 2004 Retired base card earlier this year with the intention of sending it out for a TTM (Kaline was known as a dependable signer, though with a fee). Unfortunately I was putting off my next round of TTM attempts until this summer, and so the clock ran out and this wasn't meant to be.
Still a neat card. 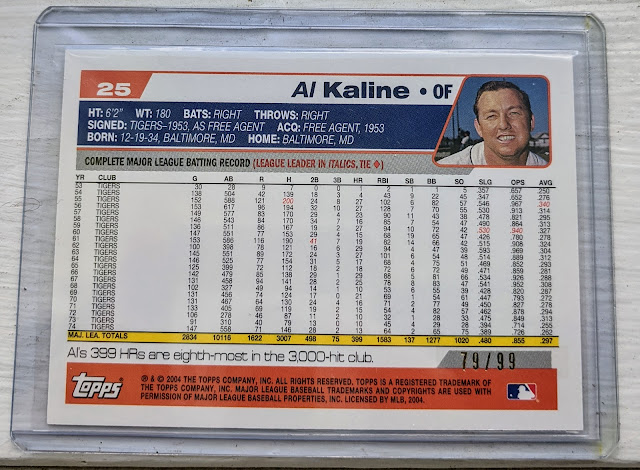 It's numbered 79/99. As I half-joked on Twitter the day he passed: Sad day for OCD baseball fans, as the probability of Al Kaline getting that 400th home run has now been mathematically eliminated. Up until now I had been holding out hope for a Miñoso-esque final at-bat w/ a sympathetic pitcher lobbing one up there for the old-timer to swat out.

(I don't mean to make light of the man's death. Just celebrating his baseball career with a quirky observation.) 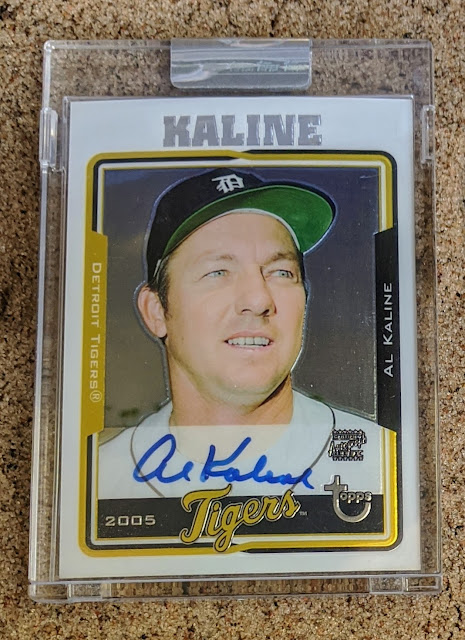 I showed off this 2005 Topps Retired auto back in early 2019, but here it is again since I guess I'm featuring a Kaline Retired "Trifecta" of sorts here. An Al Kaline trio, if you will.


(See, the joke is there's a band called Alkaline Trio.)

When I first posted that '05 auto on the blog last year, I had about one-third of the 2005 Retired autographs (39/115). Well, I've been picking up more here and there over the subsequent months and I'm happy to say I'm over the hump with this set now, with 59 out of 115 autos, good for 51.3%. Maybe someday I'll finish that off. I've already completed 2004, but wouldn't mind adding '03 and '05 to the accomplishment. And I'm talking about a mix of base autos and refractor autos. In a perfect world, I'd have all refractor autos, but there are only 25 copies of each in existence, so they don't pop up all that often and are typically expensive. But I keep a vigilant eye out. I'd love to "upgrade" the two Kaline autos in this post to the refractor parallels someday, but I won't hold my breath. Still though.. very happy to have them.

Thanks for stopping by.
Oh wait, I almost forgot. I made a new gif card the other day...

Ha, just now noticing the headshot on his 1971 Topps Greatest Moments card is the same as his 2005 Topps Retired card. So that's fitting for this post!
Posted by defgav at 3:18 PM