I send out stuff through the United States Postal Service as a main duty of my job (data DVD archives), so I'm very interested in how the current situation there works out. The USPS says they'll likely go tits-up soon without a bailout type of situation from the government, but the jackasses currently in charge are flipping them the bird and would rather see the private sector take over (which would most likely mean significant increases to the postage rates we pay today).

If the post office goes away, my job could go away, too-- and more importantly (j/k): trading online would likely dry up! Ouch!

Let's hope it doesn't come to that, as trading is a great way to get cards you want, and re-home cards you don't want with someone who does want them.

Buying cards online would become more expensive too. Buying one card at a time would become cost-prohibitive unless maybe we're talking about like a high-dollar card. But for any card under $10 or so, it just wouldn't make sense. We're looking at nearly every physical-good online transaction having the price significantly bumped up.

Anyways.. I'm not trying to get political here.. but if you're a card collector, you've got to be rooting for the postal service in this fight.

I've received 3 trades in the mail over the past week which I'll now show off here. 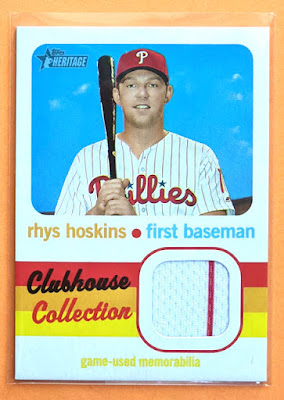 Always fun finding a brand new trading partner. Jay over at the young Card Hemorrhage blog (great name) posted about ripping some Heritage and pulled this relic card that didn't really fit his collection, so I inquired about a trade. Rhys Hoskins is a young guy I like to collect. He had a bit of a sophmore slump last year, but I was expecting to see his numbers back up in 2020 (or whenever they start playing again). I don't often get too excited over relics, but I thought this card looked sharp, and I love the pinstripe on the swatch. So I sorted my Vlads and McCoveys (a pair of players Jay and I both collect), and sent him over my dupes.

Some bonus Heritage made its way into the envelope too. That Chrome Xander is pretty sweet.

Thanks, Jay! Pleasure trading with you and I hope we end up doing so much trading that I'm eventually able to spell "Hemorrhage" correctly on the first try. :)

Then I did a little trade with Chris at Nachos Grande. I claimed the "trade stack" he had going on this blog, mainly because I was interested in the Wee-Pee's Wacky Packages. I'm a big Pee-Wee Herman fan and figured I could use the parody card in the collection. There was another card or two in the stack I could probably use too, but mainly just wanted that one. But then since we were going to exchange cards anyways, we expanded the trade a little. I love the shiny 2011 Topps.. it's a "Hope Diamond" parallel, which is basically a blue version of the cognac parallel, and numbered out of 60 on the back. As you can imagine, I don't have many of them in my parallel frankenset, but happy to score any I can. And I recently added those Pinnacle Cooperstown Card inserts to my Black Gold wantlist. Looks like Chris (a big-time Larkin collector) had a dupe to spare. 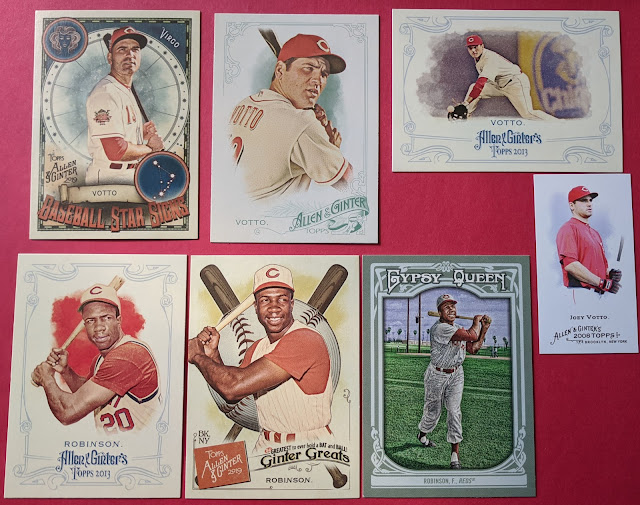 Chris also had some Votto and F. Robby cards available for me.

Thanks, Chris! I'm ashamed to admit I haven't mailed your cards out yet but I will do that very soon. 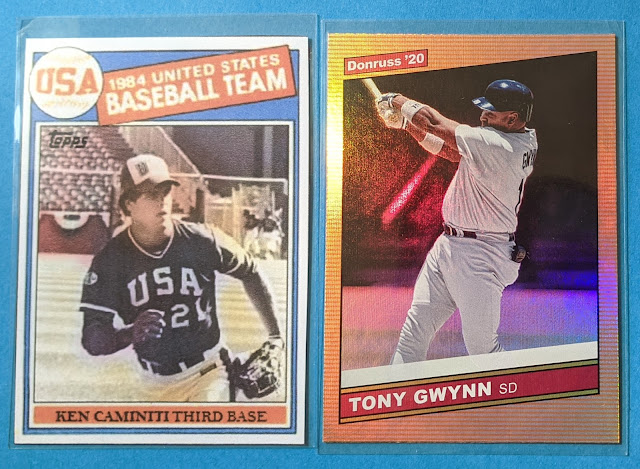 And then I was surprised by a PWE from Jeremy at Topps Cards That Never Were. Very cool '85 Topps Ken Caminiti USA custom he made a while back. I had been planning to print off one for my PC but hadn't gotten around to it yet. So Jeremy helped me out there. He said he used an online colorization site with a B&W photo, which explains why Ken's arms and hands might look a bit off. But looks pretty good for the most part. Fun addition to the Cami PC. And the shiny Gwynn is a nice add too.

Thanks, Jeremy! Much appreciated.

And thanks again to Jay and Chris, and all the postal workers out there during this crazy time. Sure is a bright spot of any day when neat stuff like this shows up in the mailbox.