Surprised by cards that were sort of expected

Time for an incoming cards roundup for the past week or so.

Brian of Highly Subjective and Completely Arbitrary was already on my I-O-U-cards list after he sent me an awesome 12/25 prospect auto a while back. Now he's gone and surprised me with an awesome "repack" of cards as part of the celebration for his blog's 1000th post. (I suppose it wasn't exactly a "surprise" since I was first to comment on the post offering cards to the first few people who commented.. but that was back in early March, so who could be expected to remember way back then? lol) 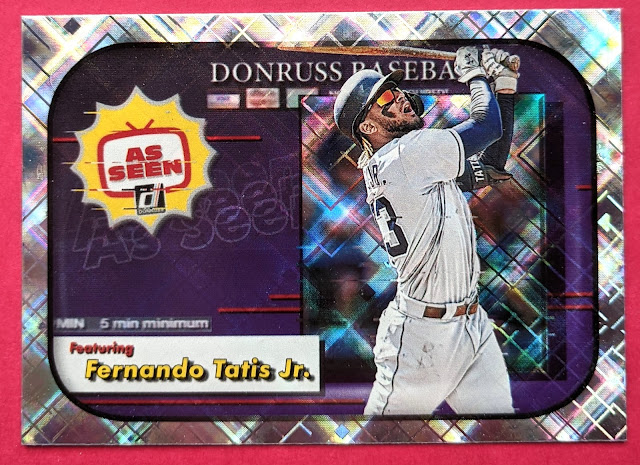 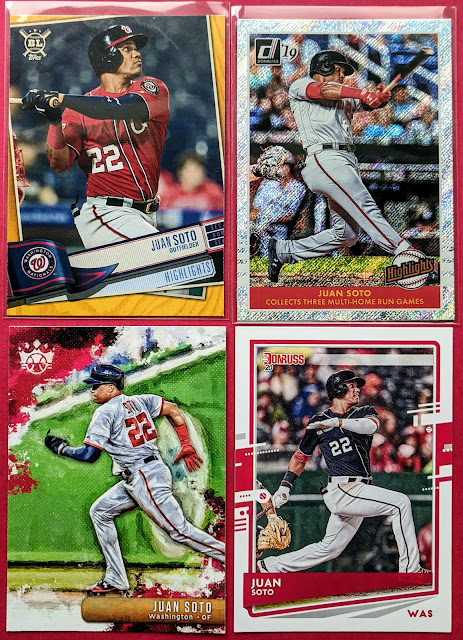 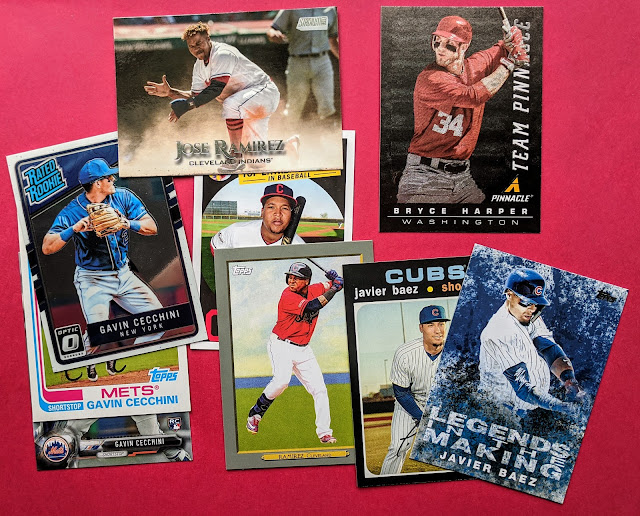 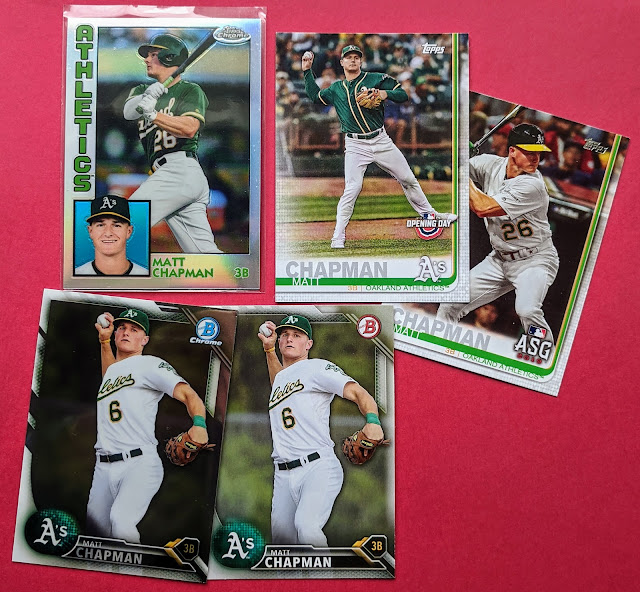 Hey, Matt Chapman is celebrating his 27th birthday today. A bit of a late bloomer, but he's been pretty good since his 2017 call-up. 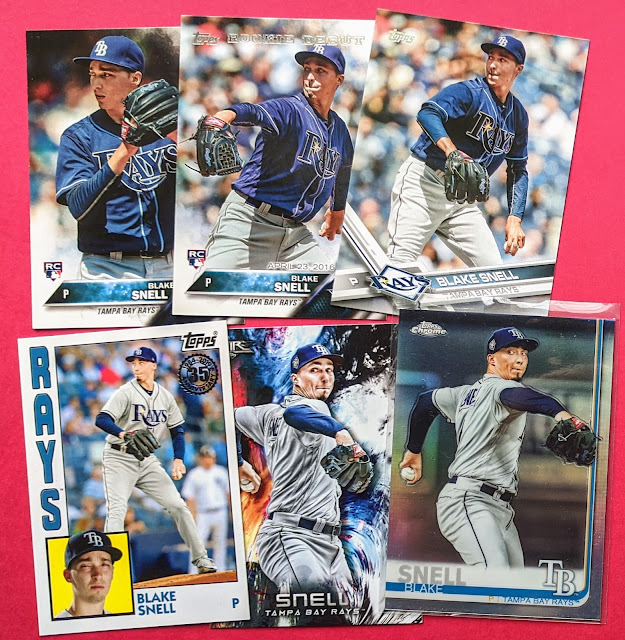 Snellzilla in the house. I started collecting him after his dominant 2018 season. Also seems like fun dude.. I see him doing video game stuff online. 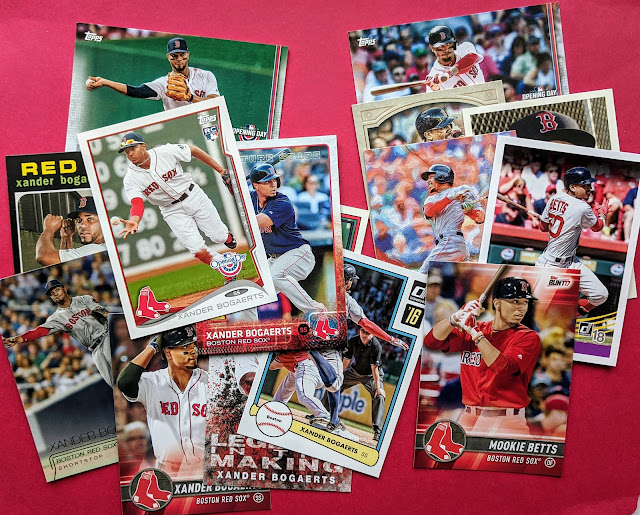 Former teammates Xander Bogaerts and Mookie Betts were well represented in the package. 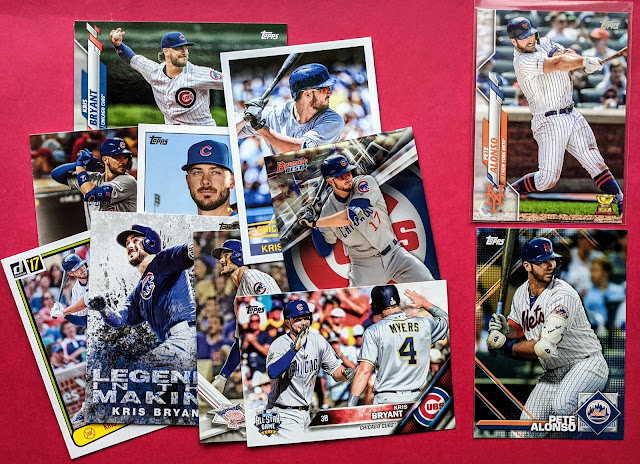 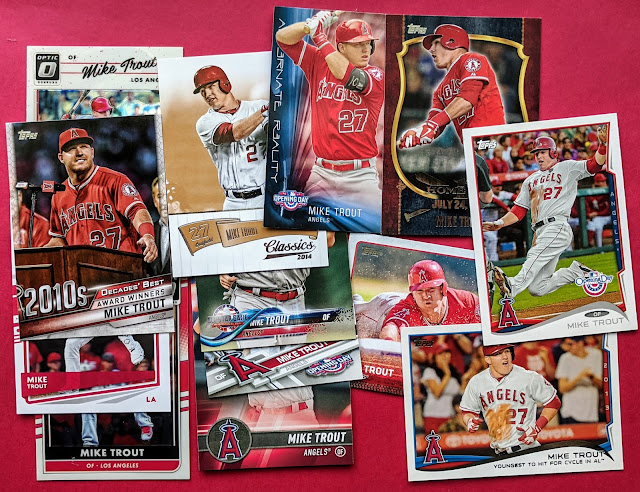 A glorious baker's dozen of Trout! Honestly, these cards alone would have been a fine "thanks for reading my blog" gift/prize. The guy's like the greatest player since Ruth, damn it! One of the worst things about the virus is it's slowing Trout from moving up the all-time WAR leaderboard. 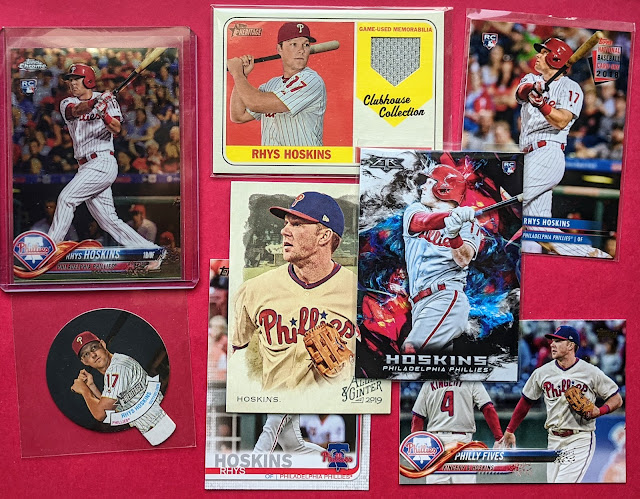 I seem to get sent a lot of Rhys Hoskins cards and I am totally cool with that. 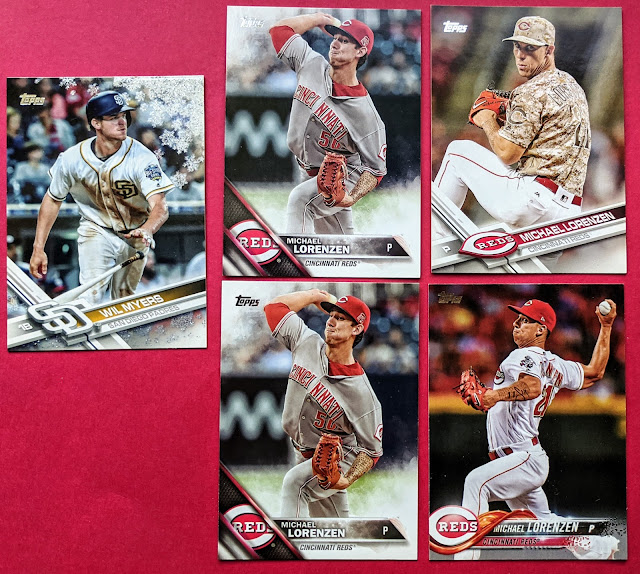 That Wil Myers is the glued-on-glitter snowflake parallel. Michael Lorenzen worked his way up my wantlist impressing me with his 2-way playing. Speaking of Ruth:
On September 4, 2019, Lorenzen became the second player in baseball history to hit a homer, earn the win as the pitcher and play in the field in the same game when the Reds defeated the Phillies, 8–5. The other player to achieve the feat was Babe Ruth on June 13, 1921. (wiki) 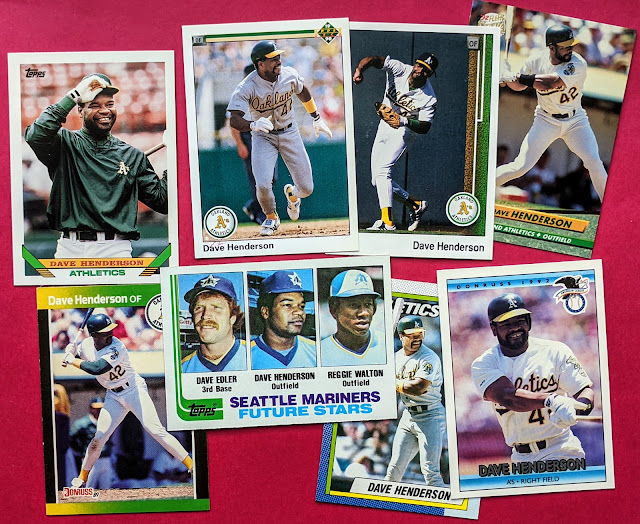 A year or two ago I had an epiphany that I love Dave Henderson and I was upset with myself for not collecting him sooner (had a little PC for him when I was a kid, but took me a while to start it back up as an adult returning to the hobby). So yes, please send me all your available Hendu cards, regardless of how "junky" they may be, because they'll likely find a loving forever-home with me. (Ha, we're looking for a new dog these days, so the term "forever-home" pops up a lot.)

Some favorite old-timers of mine. 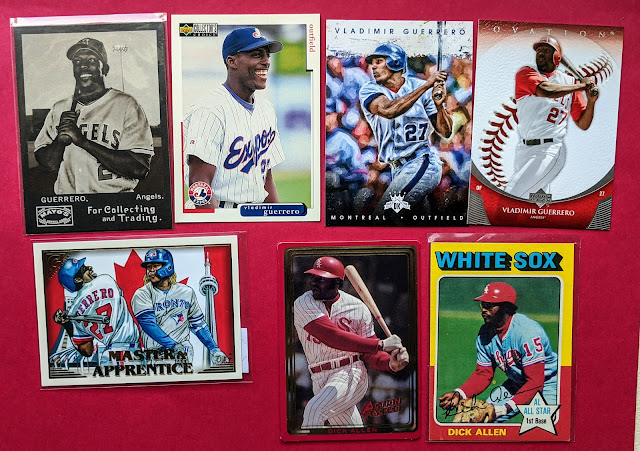 A pair of big boppers, Vlad and Crash. 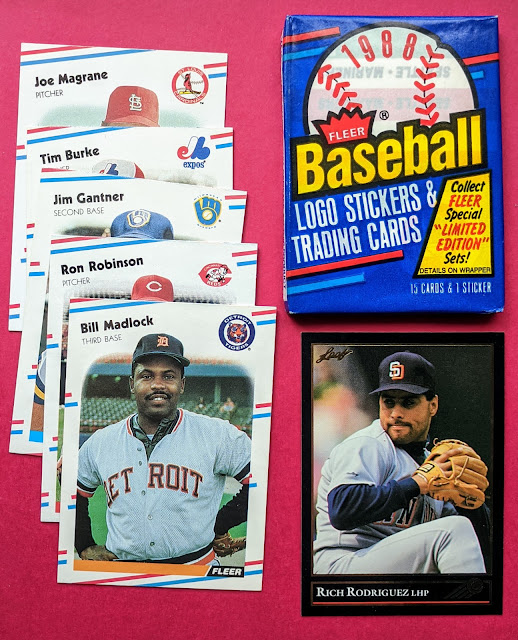 And Brian even hit some setbuilds of mine with a smattering of '88 Fleer needs, including an unopened pack. I'll probably save the pack for a rainy day, but chances are it's got a card or two I need as I round the home stretch with this set. Oh-- the Joe Magrane caught the light as I was checking it off my list and turns out is a glossy version. Welp, close enough for my set!

Big thanks, Brian! Terrific stuff! Keep up the great work on your blog. I'll shot you over a few cards soon.

Next up is a great surprise* PWE from Sport Card Collectors at Snagging Cardboard with nice looking cards of a few dudes I collect. (* Again, probably shouldn't have been a surprise, as he had tweeted out a heads-up a few days earlier.) 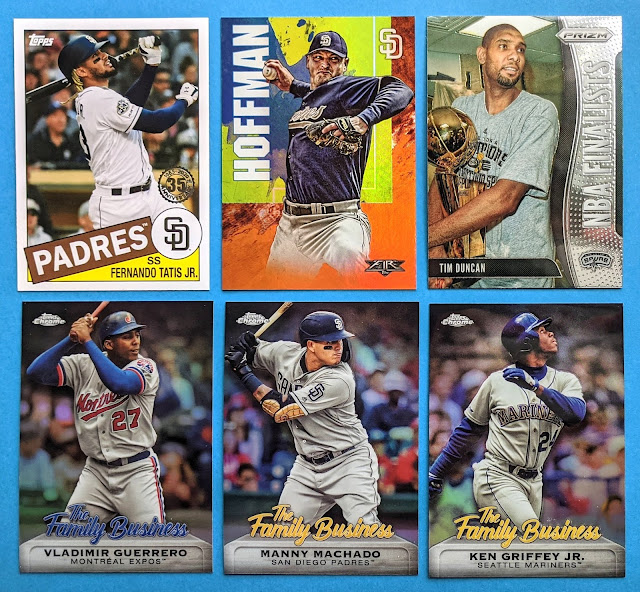 Right on. The fiery orange Hoffman is numbered 12/299.

Thanks, Man! I'll put together a return PWE for you shortly (update: mailed out today).

Tom at The Angels In Order had a bonus Kellogg's card he got from a recent cardsphere giveaway and offered it up if anyone wanted to call dibs. I did, and we had a quick PWE trade in the works. 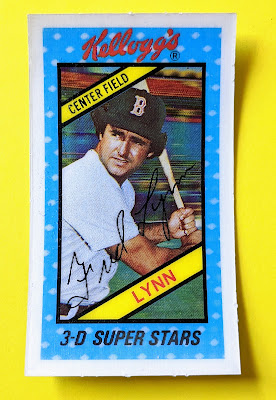 I'm not sure if I had this yet or not-- I've only now begun sorting my several Kellogg's cards by year; expect wantlists up soon!-- but even if I did have it, well hey I've got a modest Freddy Lynn PC going, so I guess technically I want two of them in my collection anyways. 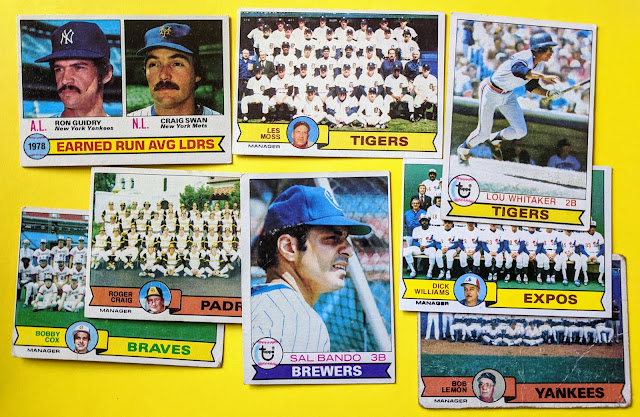 Tom also threw in a bunch of '79 needs to surprise me with! I recall he mentioned in an email that he had some set needs for me too, but sometimes it's not till you open up the envelope that you're like, "..oh yeah!"

I'm now down to just 27 needs left to finish off 1979 Topps (plus several more upgrades to worry about after that.. and a few wanted dupes for PCs.. but not too concerned about that stuff right now).

If you can help with any of those, feel free to get in touch about hammering out a trade! Would love to knock this one off before I dive into the old Kellogg's sets.

Anyways, thanks a bunch, Tom! I dropped a return in the mail for you the other day, so expect that soon.