My new LCS? A quick review

My last couple posts have mentioned how, since I moved, my new grocery store has a card section not too unlike what you'd find at a Target or Walmart. But there's also a real card/comic shop close-by that I pass on the way to the grocery store. I took advantage of the last lazy day in my "spring break" mini-staycation to walk the pup over there and finally check it out. 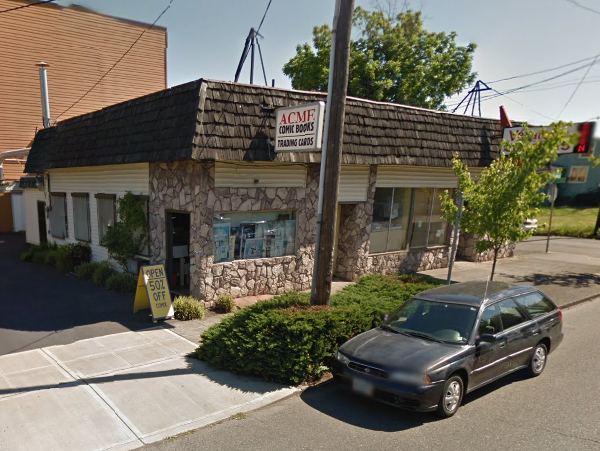 You can see it's just a little hole-in-the-wall (thanks to Google street view for the image.. No, I wasn't standing on something in the middle of the street to snap this photo, lol). I didn't have high hopes for it. And yep, it was pretty much what I was expecting. Just one-aisle big. Mostly comics. Sportscards you could get for a quarter of the price online.

I was hoping for at least some packs of new/recent product, but the unopened packs were along the lines of 1991 Score. I also had an eye out for some supplies.. penny sleeves and whatnot.. but no dice there, either. Any help for my '73 Topps set? Nope, not really. I didn't bring my needs-list, but he said he only had a couple dozen cards from it.

The guy was nice enough. Pretty much the first thing out of his mouth was that I should bring in my collection for a free appraisal, and he then went on to several times tell me how the card selling market is terrible right now. I guess he must get a lot of guys my age trying to recoup their allowance money spent on junk wax a couple decades ago.

But yeah, he was ok. Several times he referred me to another local shop which, according to him is the best baseball card shop in the state, and would be sure to have everything I'm looking for. It's just about a 10 minute drive from my house, so still not bad, but there's something nice about the idea of taking the dog for a walk on a lovely day and picking up some cards in the process. And that other place isn't walking-distance. But I'll have to drive over and check it out one of these days.

I've always been content just being an "online guy" with my reintroduction to the hobby up until this year, but when I read fellow bloggers talk about how they never get card shows in their area, or have to drive an hour to their closest card shop, and stuff like that.. it makes me feel like I should take advantage of in-person carding options outside my doorstep. I'll probably hit the card show at the mall this weekend, along those lines.

So yeah, in closing, while I was holding a shred of hope that the card shop a few blocks from me was great and I could buy a bunch of stuff and support local commerce and all that, I left empty-handed and don't see myself going back there anytime soon.
Posted by defgav at 4:34 PM