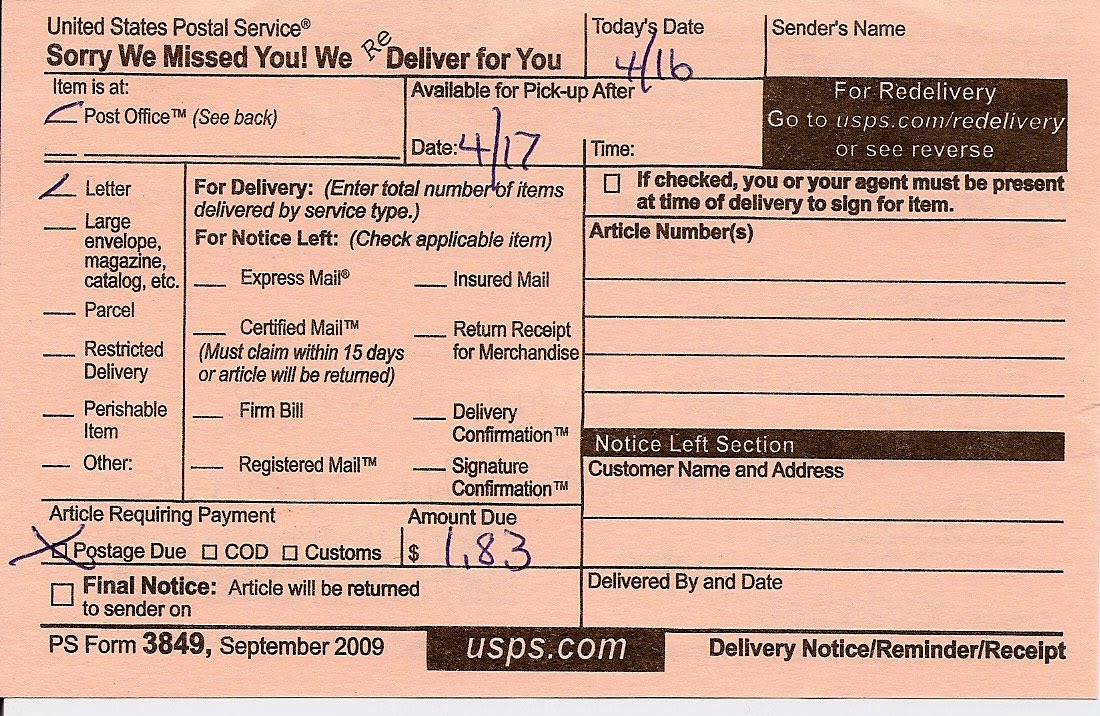 I'm not sure what this is. I don't have any eBay wins I was expecting today. I've got a Listia win I've been waiting on for 11 days or so.. maybe it's that. I've got 2 or 3 trade reciprocations in the pipeline.. maybe it's one of those.

This is the 2nd time I've gotten one of these orange notices since I moved here mid February. Head's up, prospective trade partners, my post office are sticklers for correct postage. Don't just slap a Forever stamp on a bubble mailer and assume it'll be fine. Grrrr. Oh well.

I'm temped to hide a couple bucks in change on my front porch somewhere and put a note in my mailbox for my letter carrier saying, "In case of postage due, check the flower pot" (or whatever).

I remember sometimes in the past at my old place, they'd give me a note that was like, "hey, postage due, buddy" but still deliver the item, and include a mini manila envelope for you to put funds and leave for them to pick up next day. But not these guys. Maybe there's a limit for that.. like, over a buck, you gotta stand in line in the hellhole that is the postoffice.

I hate standing in line at the post office and deal with the soulless pricks who work there. When I mail stuff, I always use the automated kiosk unless I absolutely can't, such as International packages to mail. (Sorry, non-US peeps, but not only is it costly, it's a pain in the ass.)

I should clarify that letter carriers I've interacted with have generally been cool. I'm directed my vitriol on those who deal with customers in the post office. In their defense, I'm sure they deal with a ton of assholes and idiots everyday, and so their souls have been beaten to dust and now they simply don't give a shit about anyone or anything. Power games with the poor saps who have to bow down to them are how they get their kicks.

Thank God for the automated machines.
Posted by defgav at 8:42 PM