Topps Archives is a bit of a guilty pleasure of mine each year. But back when Archives was still basically just a reprint product, there was 2002 Donruss Originals, a set where Donruss paid tribute to 4 of their designs from the 80s. Base cards were all current players, but old-timers found their way into the set via inserts. So it really is like Donruss' version of Archives.. before Archives. It apparently didn't sell well enough at the time, so it became a one-and-done release. I wonder if Panini will eventually revive this idea. I know the current Donruss product pays homage by using some design ideas from past sets, but they usually try to form "new" designs, rather than just straight-up reuse old designs. I'm sure if they did, collectors would assume they were ripping off the Archives idea from Topps, but again, Donruss was doing this before Topps morphed (Reprint) Archives with All-Time Fan Favorites and added current players into one set. I suppose they both owe something to the Baseball Card Magazine cutout freebies from the late 80s/early 90s that started the craze of putting current players on cards with classic old designs.

Anyways, 2002 Donruss Originals is a set that intrigued me, but I didn't have any cards from. I'd been wanting to take a trip back in time and rip some packs, but there's not a lot of unopened product still out there, and what is out there is overpriced, as far as what I've seen. But I found this lot of 7 hobby packs on sale for $12.91 with free shipping-- a reasonable $1.85 per pack-- so I pounced on it.

Since I had some fun busting out my old toys from the 80s when I broke my 2014 Archives box, I figured I'd take a dip in that nostalgic pool again for these 7 packs. Any excuse for a grown man to play with toys, right? So here we go!

------
One day Conky and his pal Mac Tonight were playing down by the old quarry when under some brush they discovered multiple strange capsules. 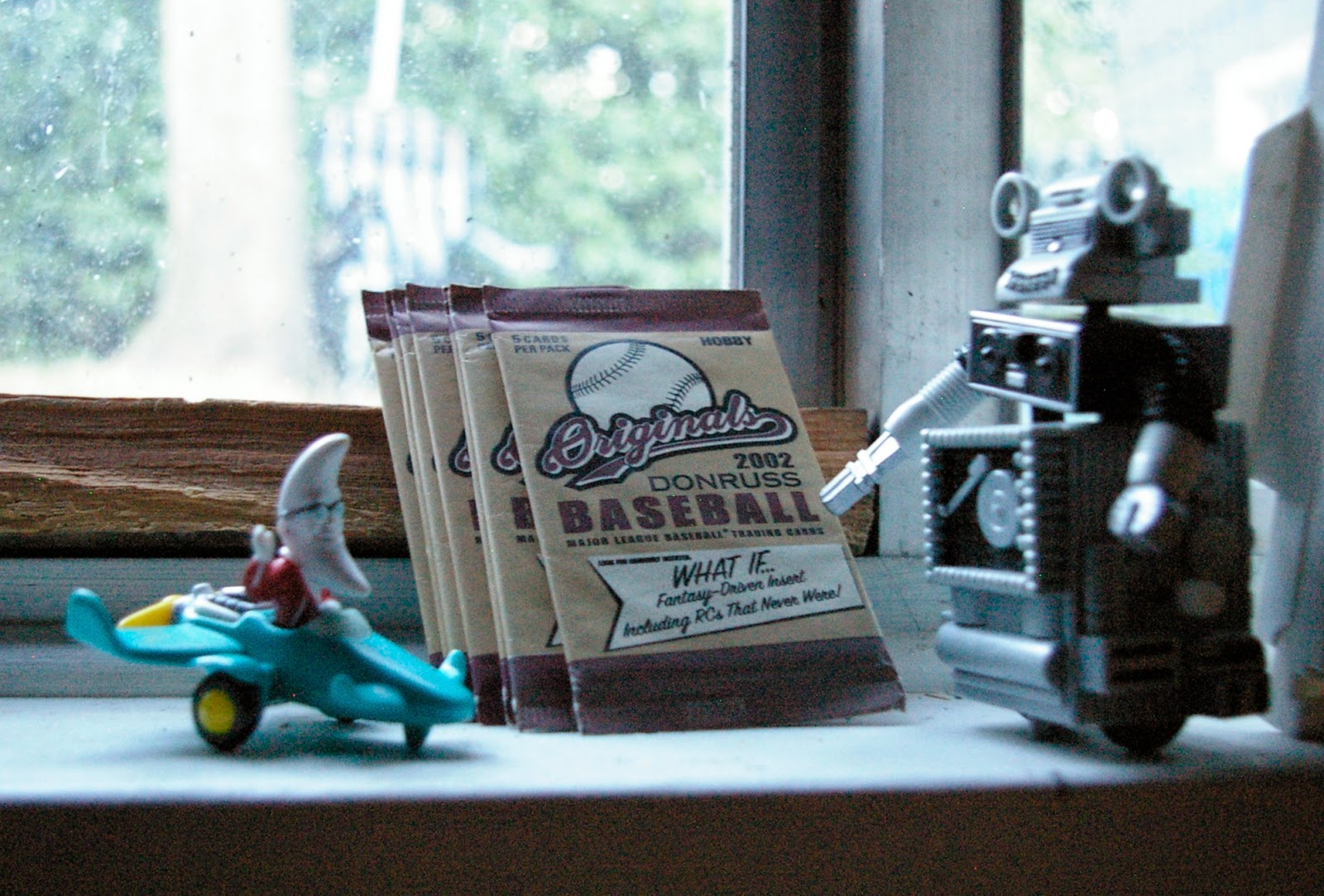 The two decided to take their discovery home. But first, they couldn't fight their curiosity and ripped open one of the capsules. 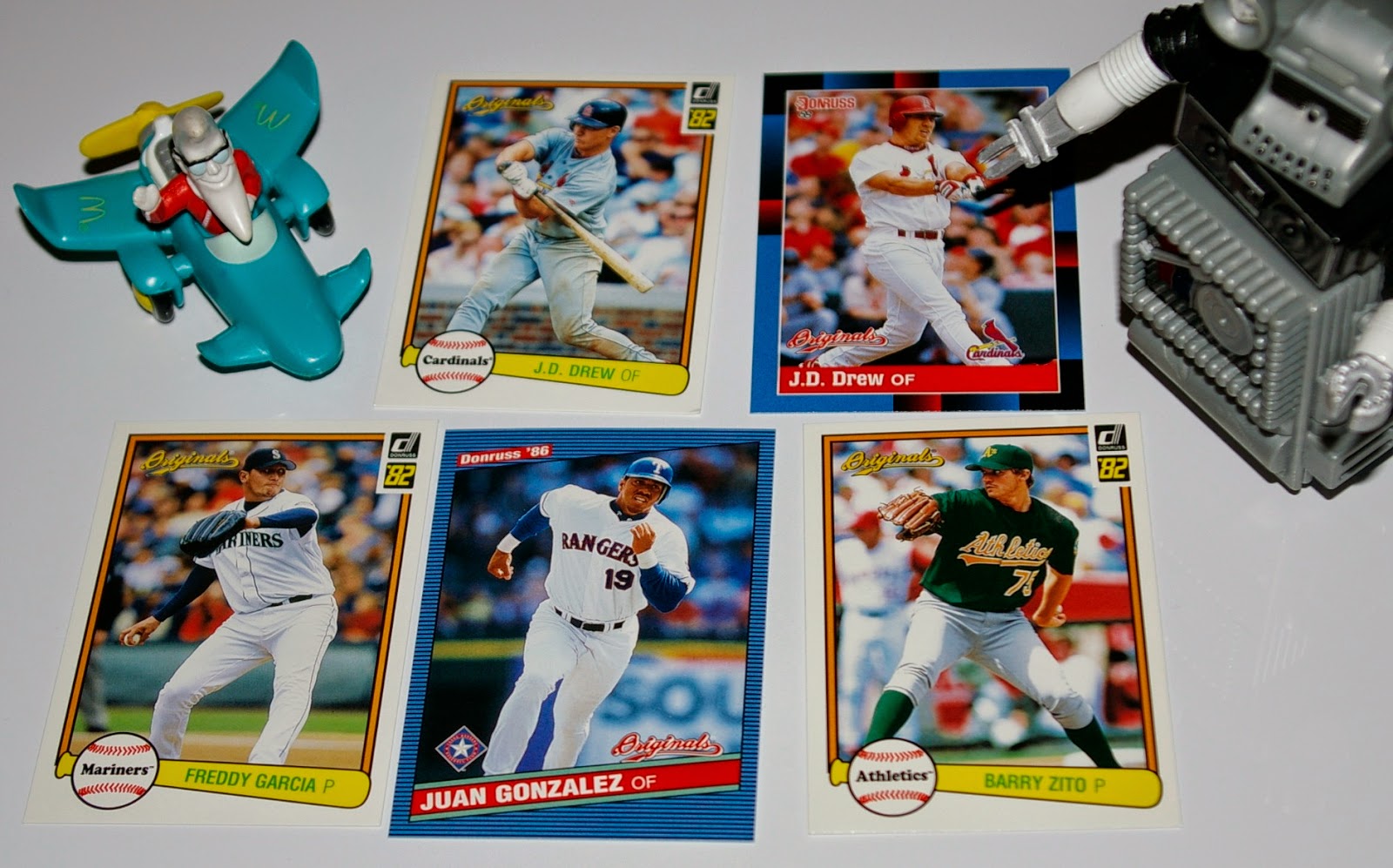 "That's some crazy shit," Mac muttered in a concerned manner. "Let's get this stuff home."

But then they were jumped by ninjas!

"You are a force of the clear, sticky evil, are you not?!" inquisited the tall ninja.

"You do not work for his clear demonic sticky power?" asked another ninja.

"Well, no one here is named Pee-Wee...[?].. but you must prove yourself true of heart by opening one of your capsules," a yet different ninja chimed in. 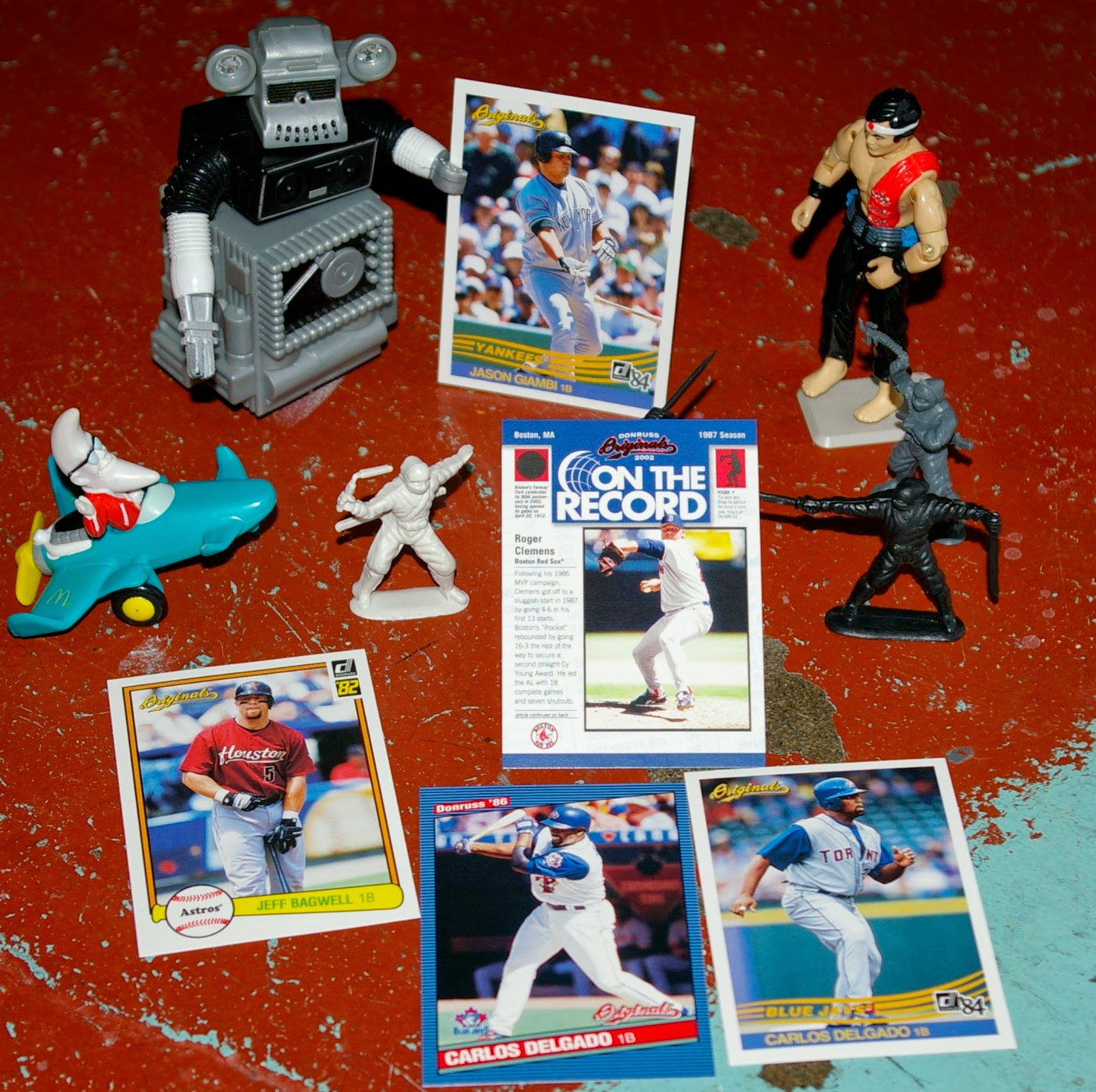 "See, check it out!" said Mac, ripping open a pack.

"Here's a G-G-Giambi short print. I live with someone named Jambi," Conky added.

The tall ninja replied, "I see. A Delgado hot pack. Very wise. And what's this? A Clemens insert serial numbered out of 800? I see that you truly are pure and good of heart."

He then went on to explain that the Noid stole all the land's clean top loaders, team bags, and blue painter's tape. The townspeople were all forced by demonic power to use clear scotch tape to defile all top loaders of the kingdom. Making convenient pull-tabs was a crime punishable by being frozen by the Noid.

"Aw, man, that's messed up. Clean top-loaders are important for protecting and displaying the things we hold dear," said Mac. "How can we help?" he inquisited.

The gray ninja led Conky 2000 and Mac Tonight through the forest on their way to find one substance that had been rumored to exist that might help them fight the stickiness: Gummiberry Juice.

Along the way, they came to a pile of dying top loaders. The violent markings of a tape assault were present for all to see. Permanent marker and other assorted sticky residue only added to the nauseating scene.

"Yeah, that's pretty f'd up," responded Mac. "I'm having trouble keeping my McNuggets down," he said, fighting back vomit. 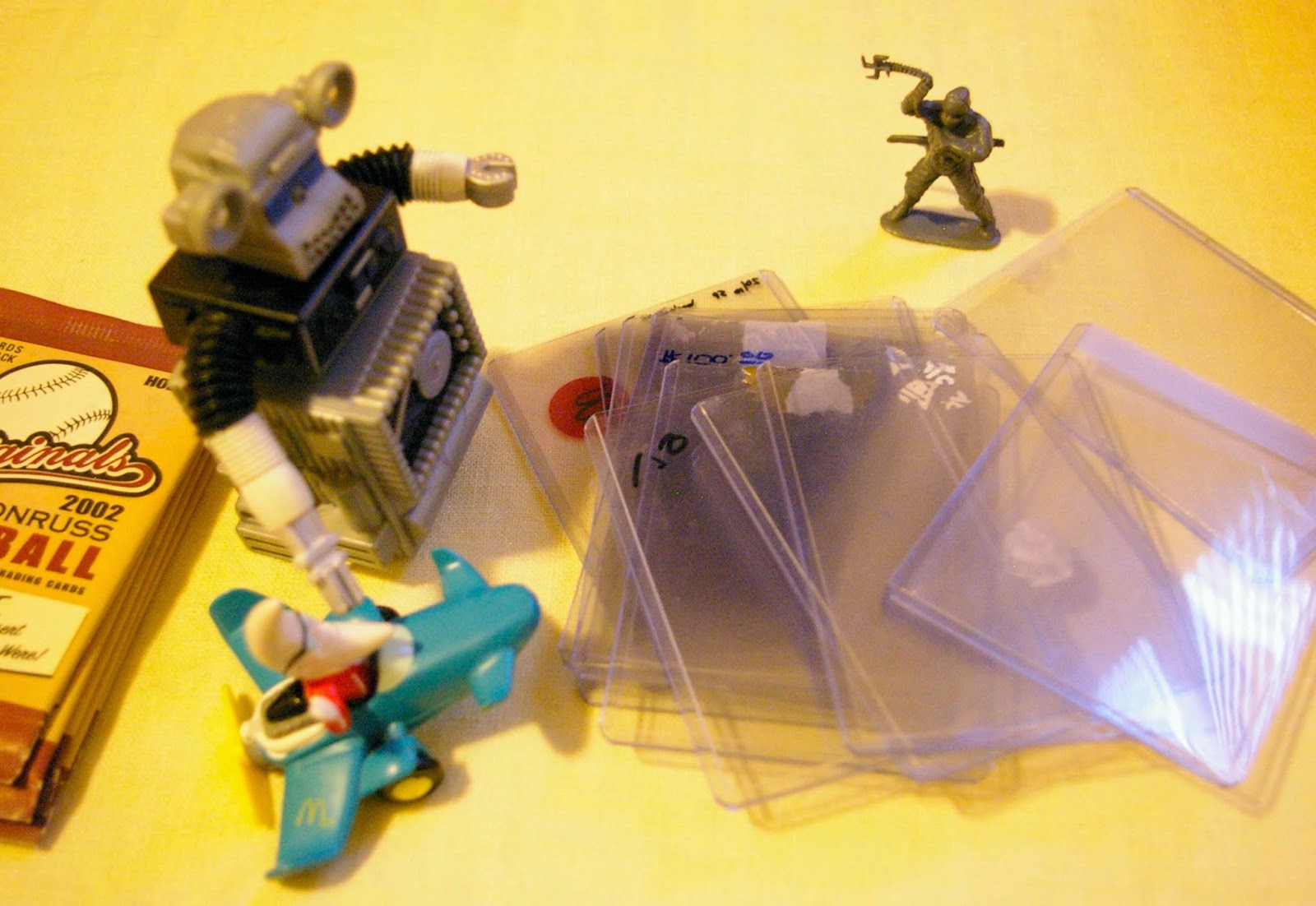 To help the top loaders die with dignity, the gray ninja suggested they open a capsule. So they did. 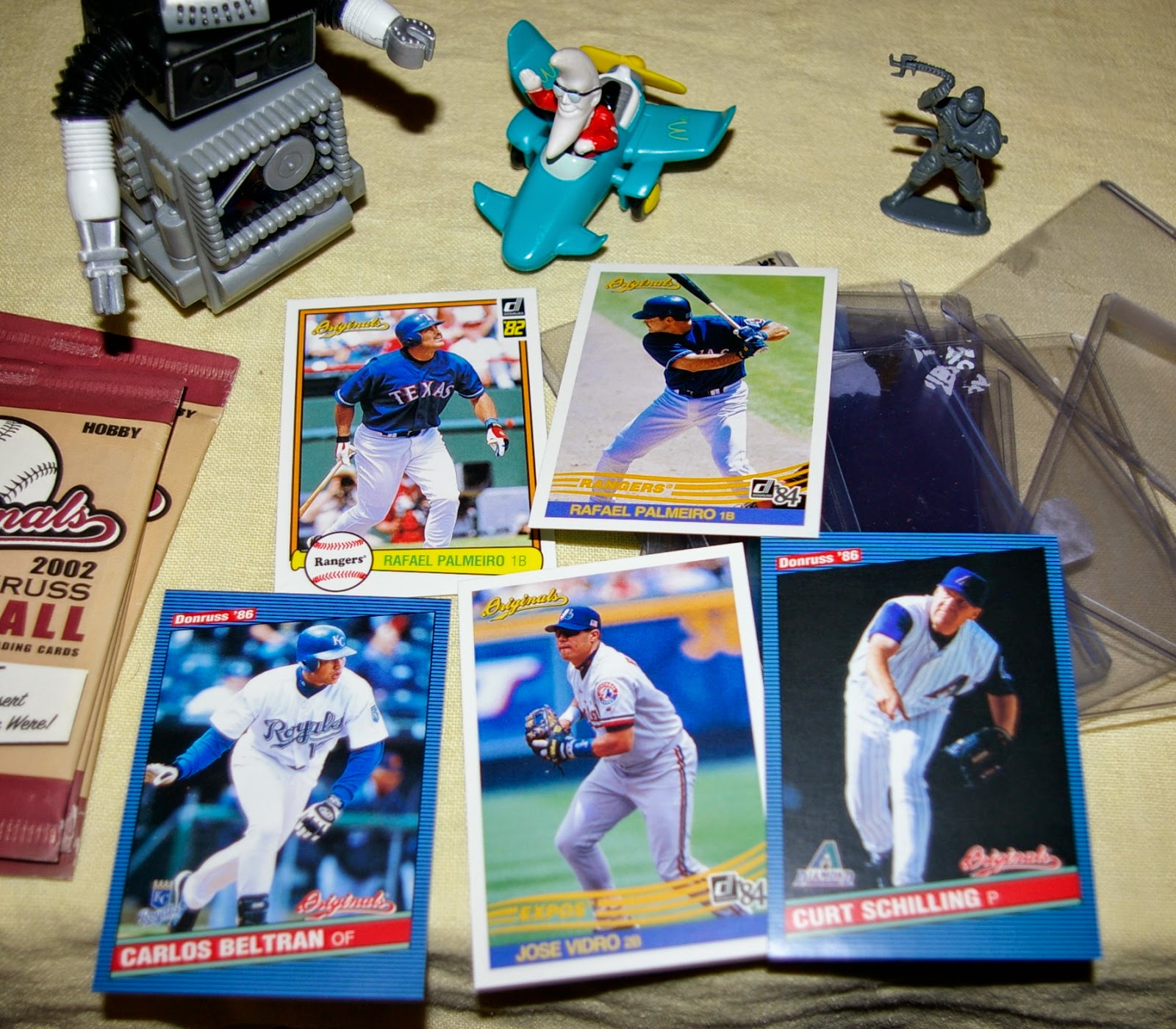 "A Rafael Palmeiro hot pack?! Does every pack have two cards of the same guy?" inquisited the gray ninja.

They tearfully buried the brutalized top-loaders in the trash. Eventually, they found the Gummi Bears and inquisited about the Gummiberry Juice.

"No, we kinda stopped using that stuff because it stunk of astringent citrus and lingered forever," explained the pink one. He then suggested they open another pack, so they did. 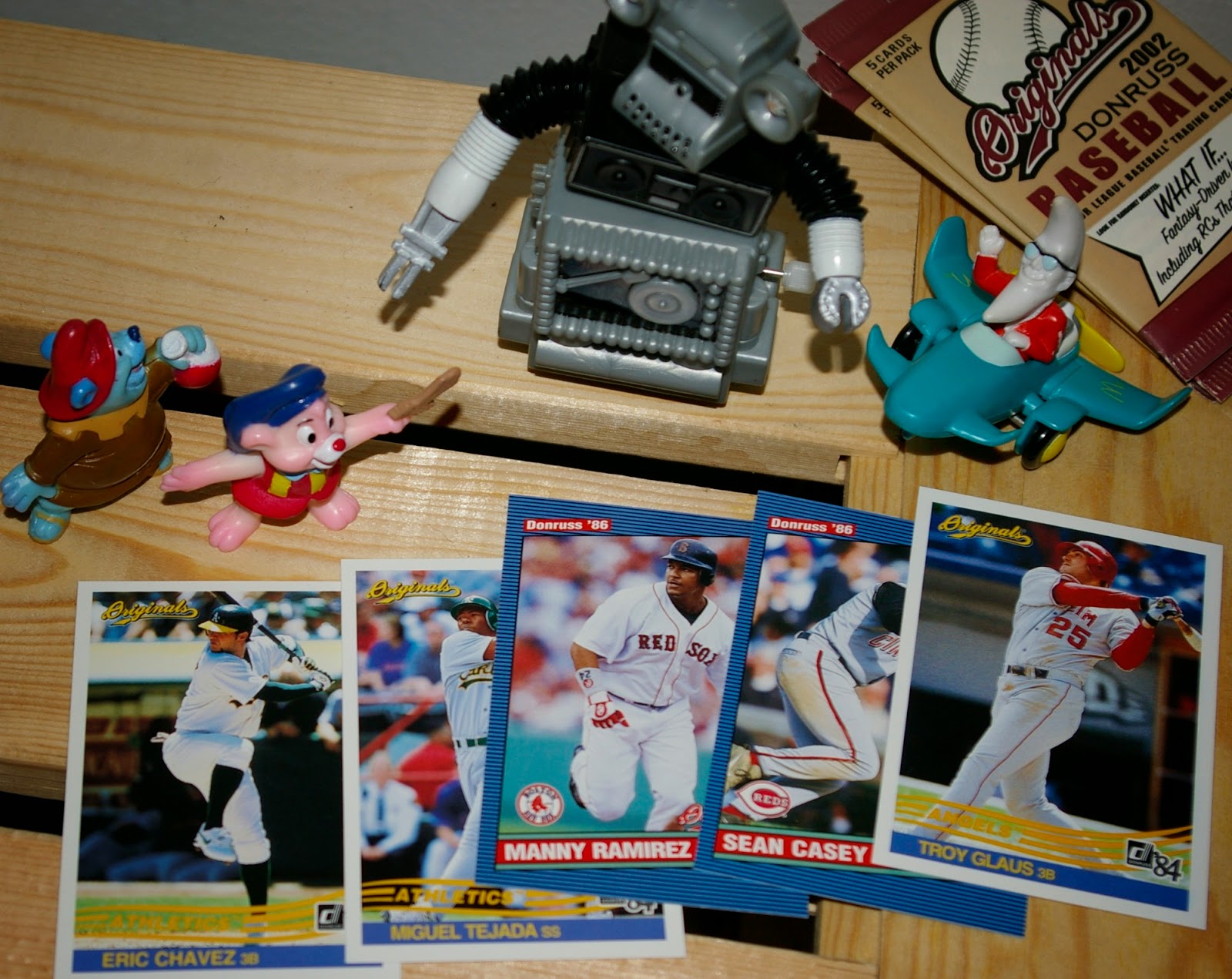 Wow, a pack without 2 cards of the same guy. That's a first.

Anyways, the Gummi Bears said they knew where the Noid's secret lair was. But he was much too powerful to fight without an army. When pressed, the blue one remembered he knew where they might be able to find an army. 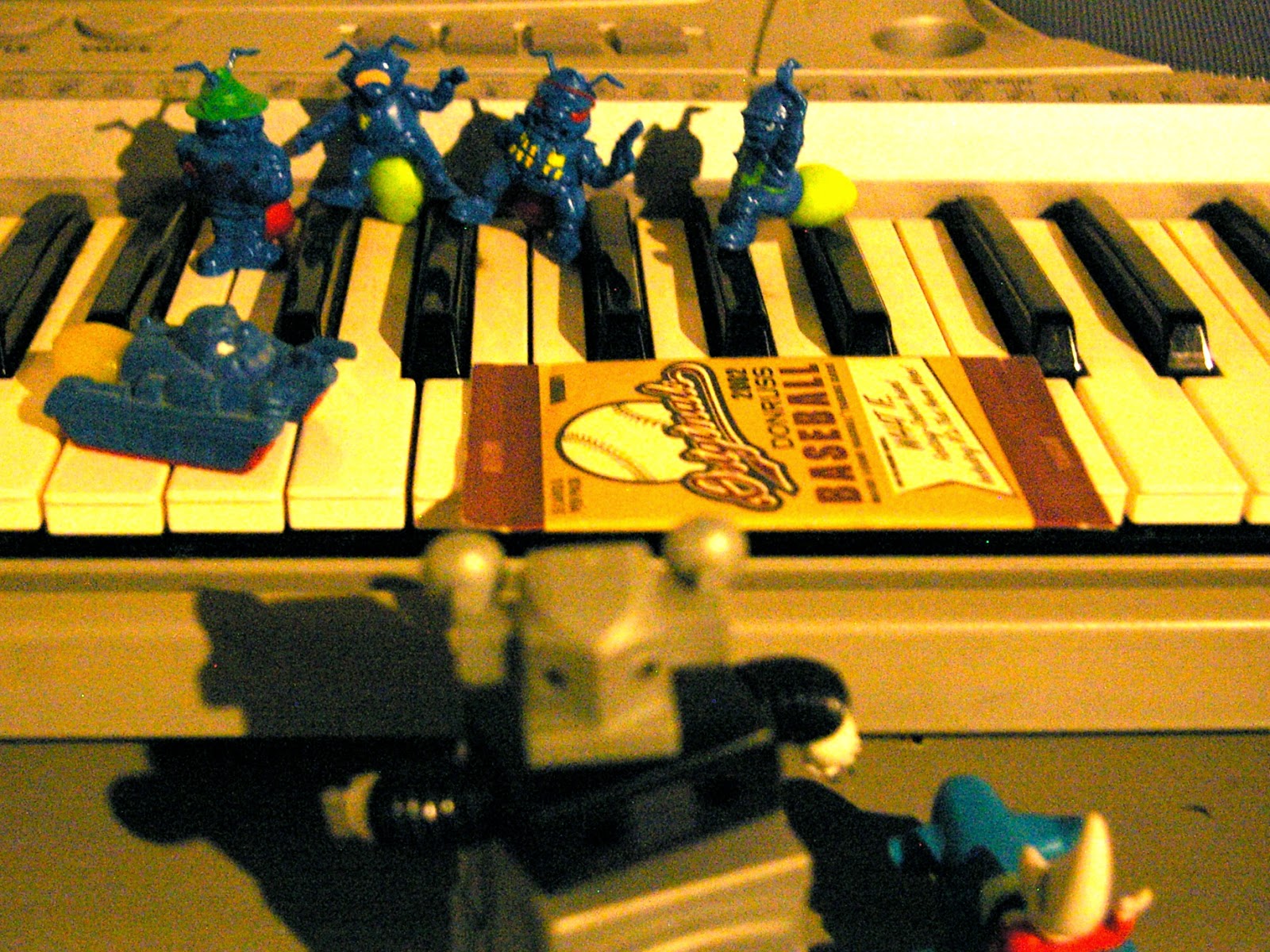 The Army Ants were open to helping out our heroes, but first they needed to be persuaded by being shown some cool baseball cards. So obviously they opened another pack. 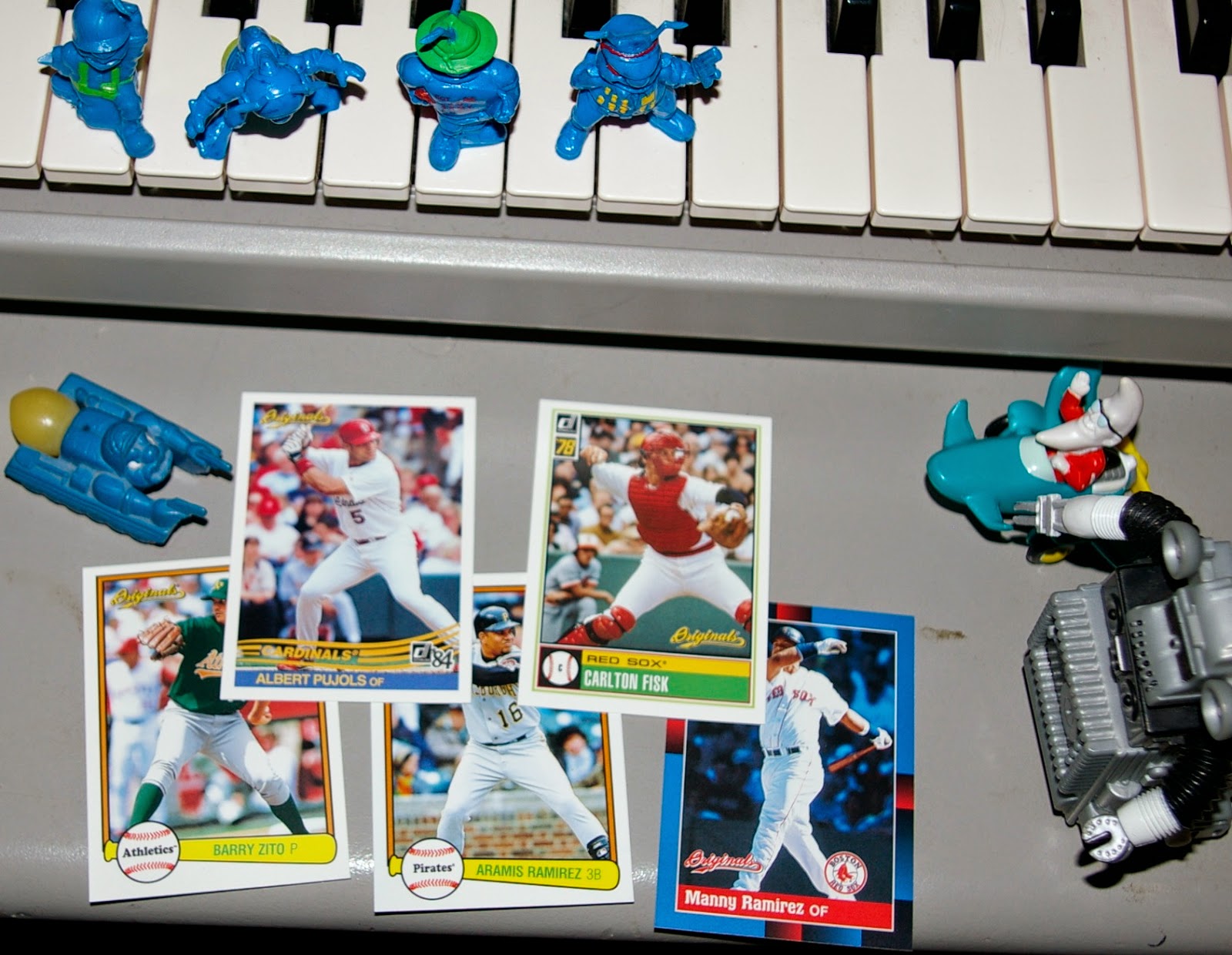 "A Carlton Fisk 'What If?' insert (inserted 1:12) and an early Pujols card?! Plus I think that Aramis Ramirez is a short-print. Yeah, you guys are legit, for real," the Army Ant general said. "Ok, we'll help you." Inquisitations followed.

The Gummi Bears led them to the secret lair of the Noid. 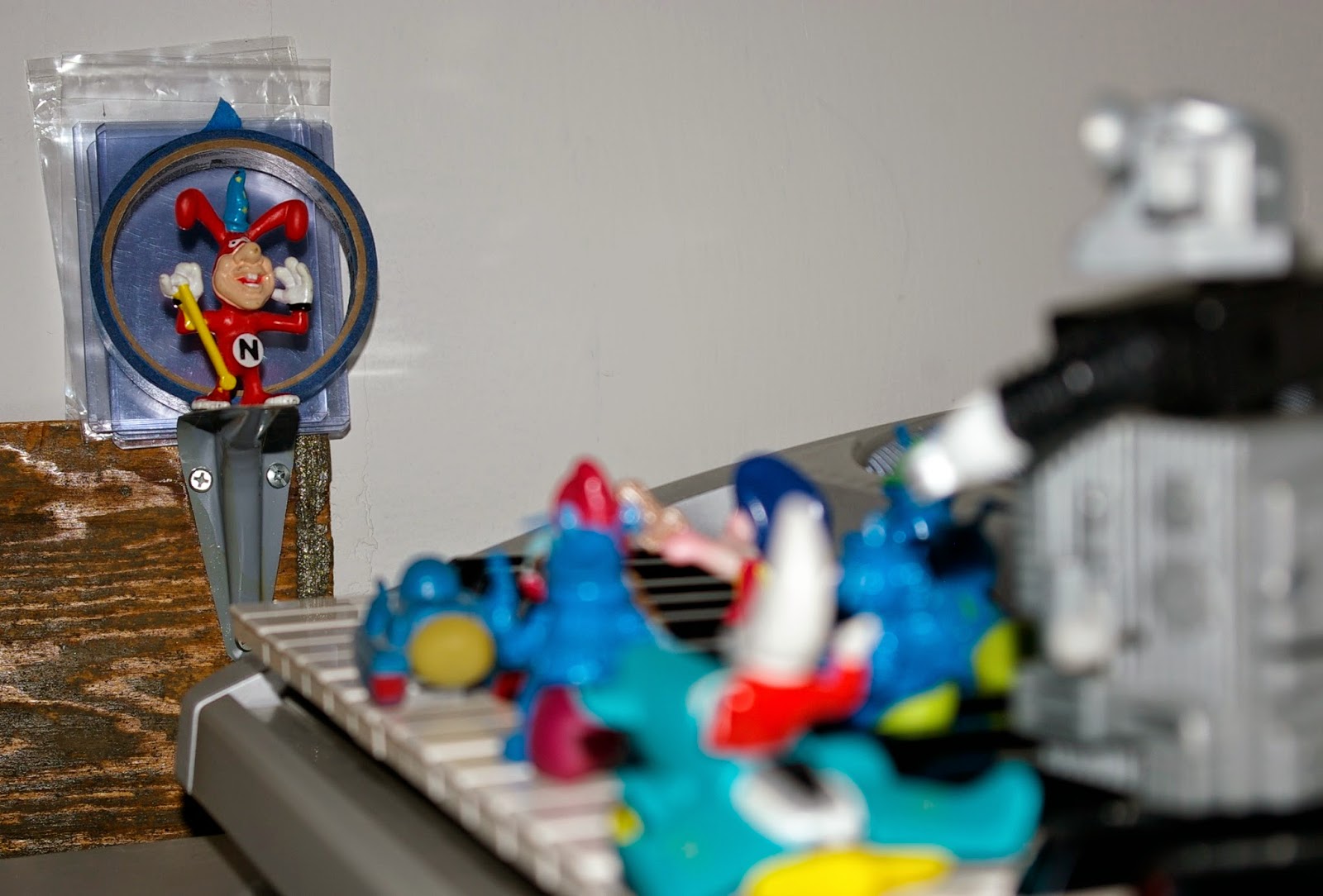 "It's on, bitch!" said one of the characters in the story.

The good guys attacked with a pack of goodness.

But no, it wasn't quite good enough to avoid the Noid. The Big Unit is always nice to pull, and the lone Padre of the post is ok, but the Noid was able to just brush off the attack and reach for some cheap clear tape for which to wrap up the good guys.

He then proceeded to open the last pack of baseball cards. 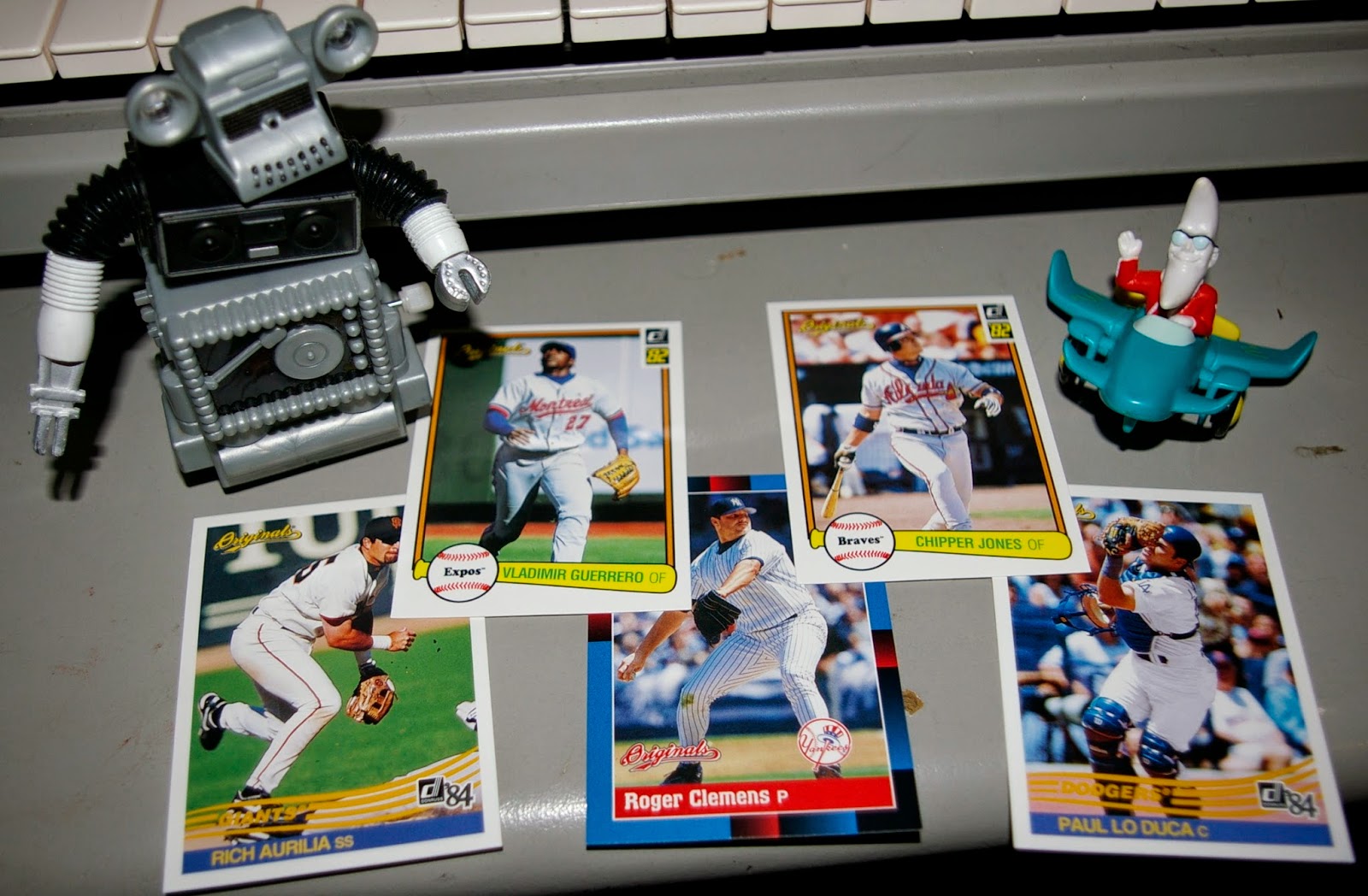 A powerful dose of Vlad! That guy was a beast in his prime! Throw in future HOFer Chipper Jones and pretty good pitcher Roger Clemens and it was just enough to shake the Noid down from his perch and into the waiting mouth of the vicious moat monster, Anastasia.

"What?! How did you defeat me? Is this really happening?!" shouted the Noid inquisitatively as he fell.


The monster ate up the Noid. The kingdom rejoiced and had a big party! 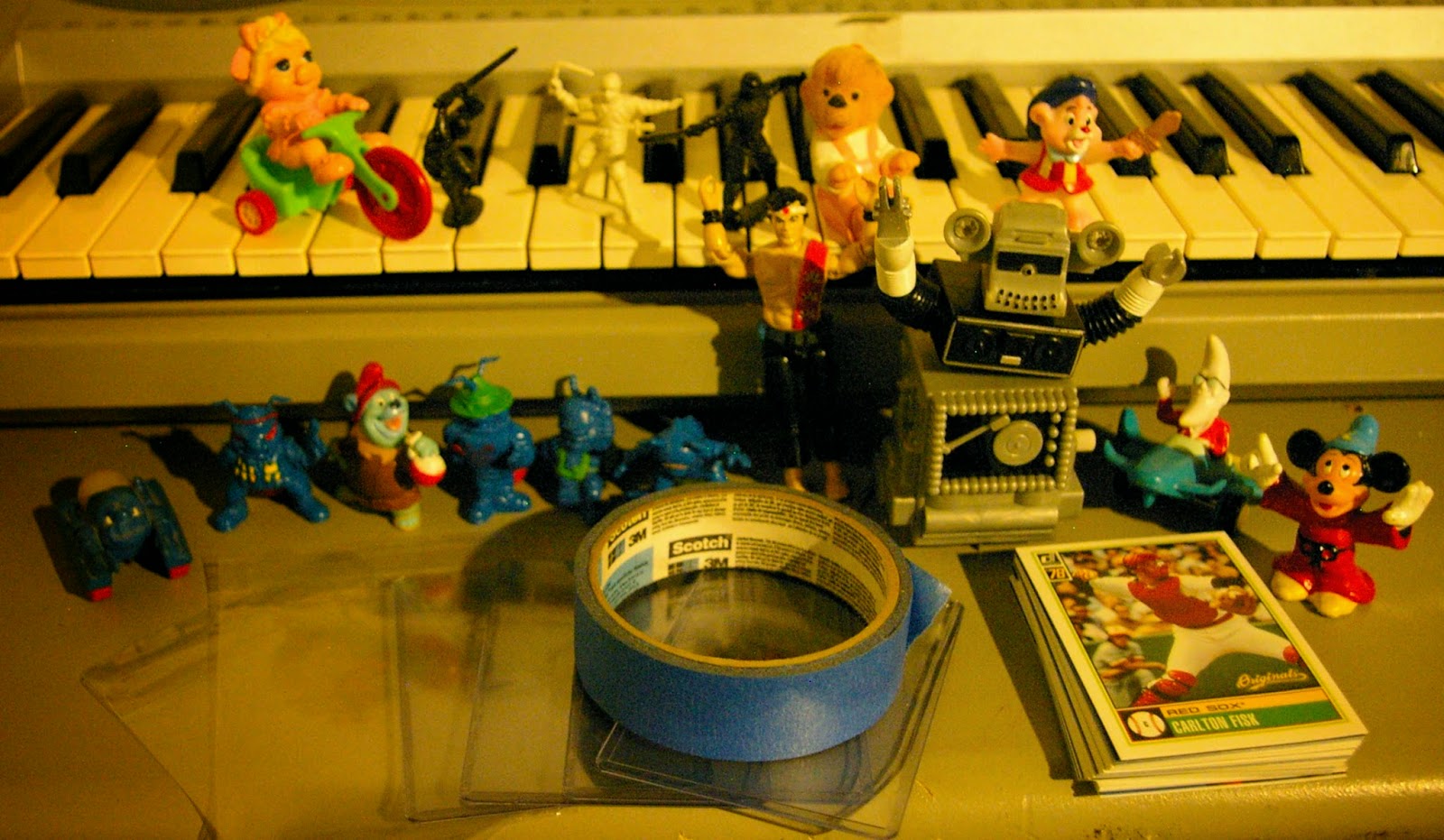 The top-loaders had been saved! No more clear tape to ruin them, only the warm embrace of blue painter's tape, lovingly applied with pull-tabs for easy removal.

And they all lived happily ever after. The end.


I hope you enjoyed that as much as I did. Pardon my inquisitiveness, but did you like how I worked Pull-Tab Awareness Week into the story?! LOL

Most of these cards are trade bait, though there are a handful I'd like to hang onto. Feel free to get in touch if you want to trade for anything. Seemed to be lots of Red Sox, which is nice since I can send them to Mr. Hoyle (I'll want to hang on to the Fisk, though). The Delgados, Vlad, and Pujols will also likely stay with me. But pretty much everything else is available.

Thanks for reading. Always make pull-tabs, and preferably use blue painter's tape, too.
Or team bags.. Team bags work great, as well.
Posted by defgav at 3:58 PM