This month, I received PWEs from Nachos Grande, Waiting til Next Year, and Johnny's Trading Spot that have heretofore not gotten their moment in the sun on my blog. So let's check 'em out!

Chris from Nachos Grande is a big cheese on the cardosphere, but this was the first time I had the pleasure of exchanging cards with the gent. He's on the hunt for any and all inserts from 2014 A&G. I had a few available from the blaster I bought a while back, so I sent them over. He returned the favor with an addition to my glow-in-the-dark collection plus a few Padres. 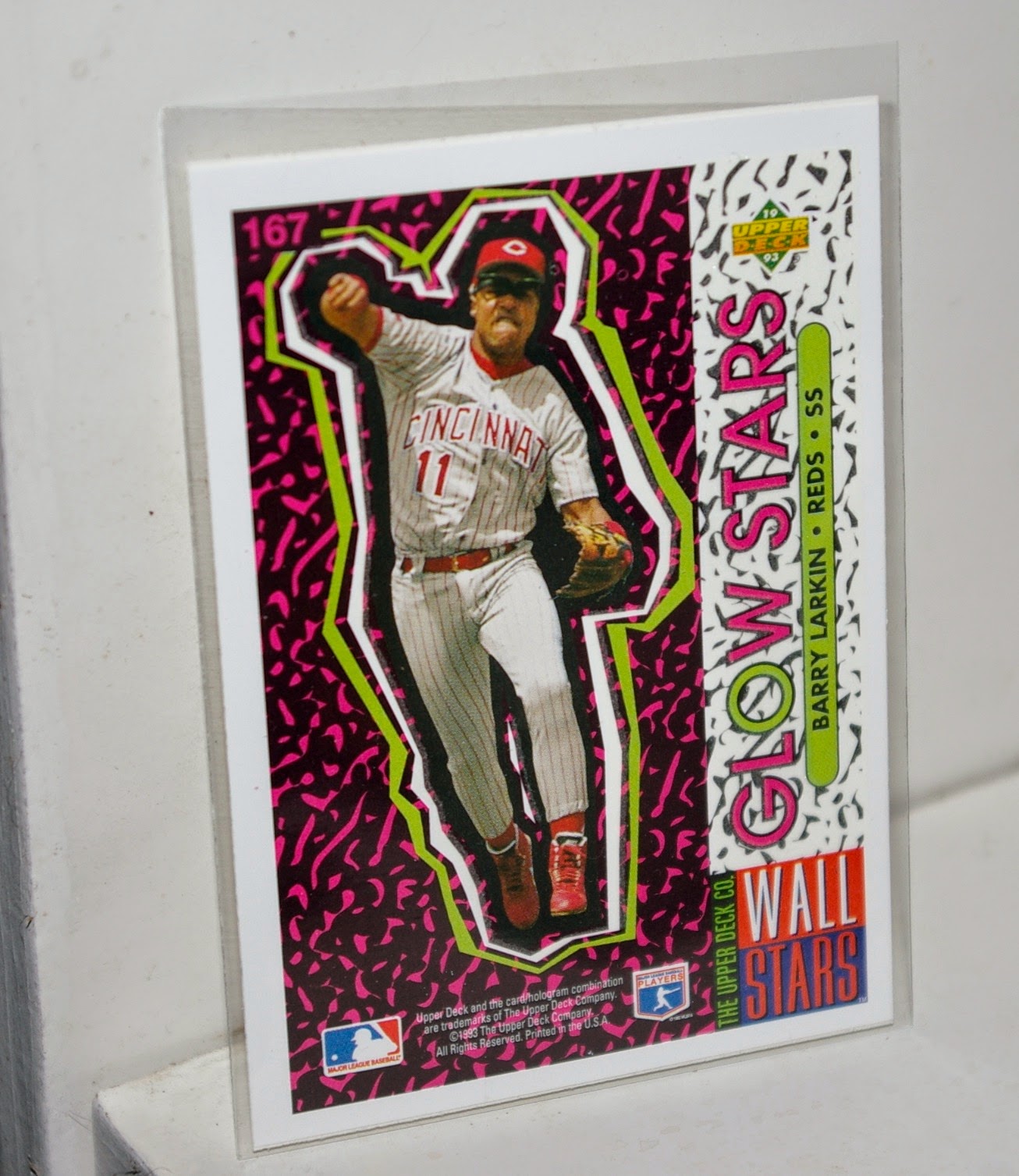 Chris is a Barry Larkin supercollector, and had an extra Glow Star from 1993 Upper Deck Fun Pack he could spare. Very nice! This gets me another card closer to completing that one-per-team sticker subset. Here it is in the dark. 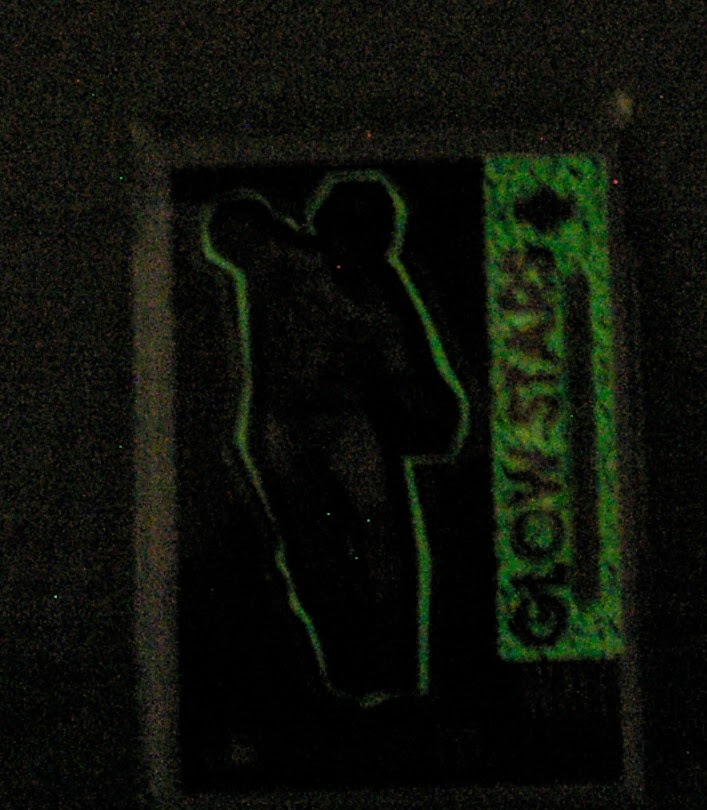 (Sorry, no animated gif this time. You might notice I haven't done much photoshop-fun lately. This is mainly due to the computer that has Photoshop on it being in a room that gets hot in the summertime. [Normally I'm on my Macbook or at my work computer.] I'll surely get back into amusingly editing cards as the temperature creeps down over the next few weeks).

Chris threw in a few Pads to boot, highlighted by these couple cards from 2014 A&G I needed. 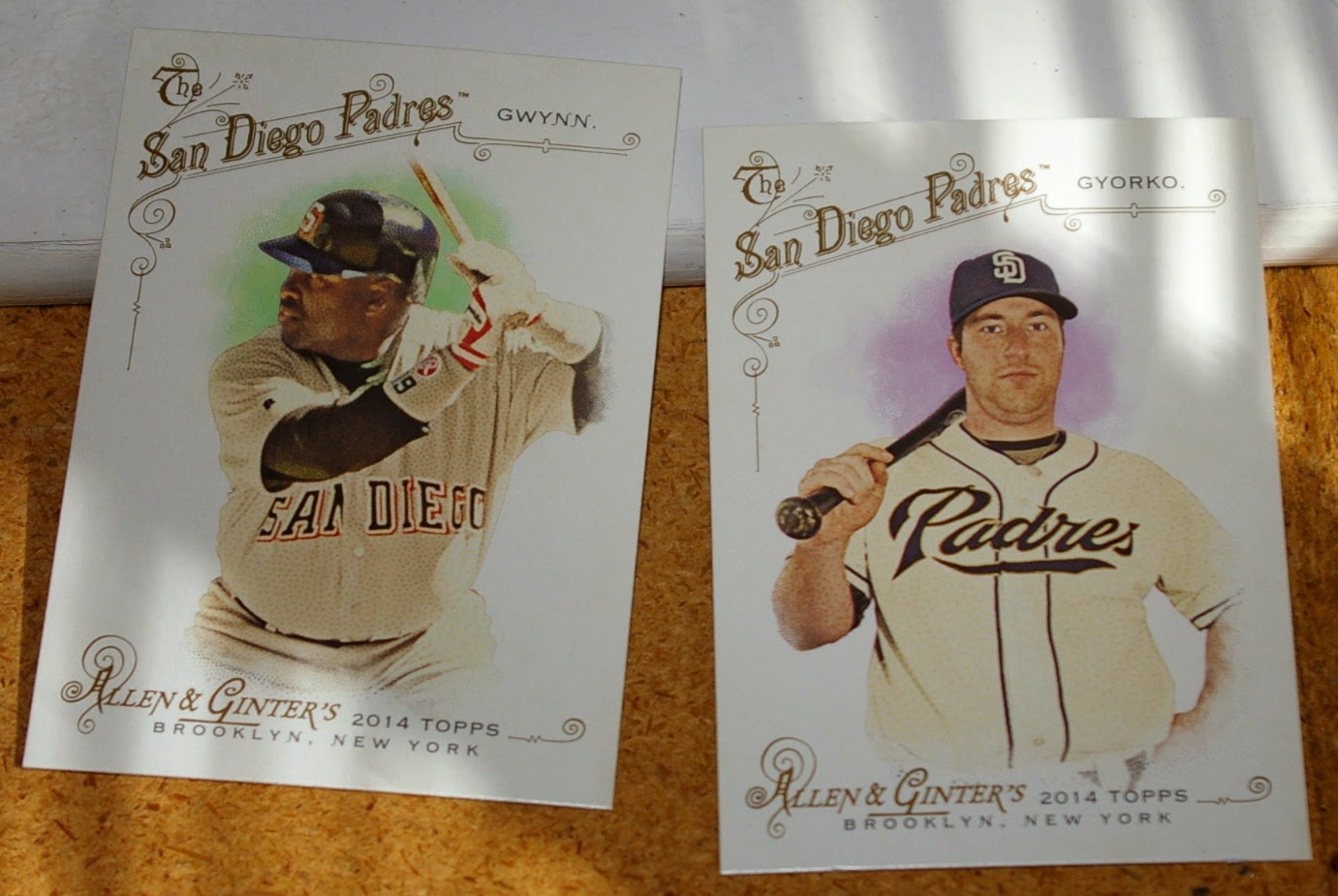 Thanks, Chris! Best of luck on your quest completing this set and all the inserts.

Next, this wasn't really a trade, per se, but a surprise PWE. P-Town Tom from Waiting til Next Year was placing an order on Sportlots and had some room in his cart to throw in a few 1990 Upper Deck Marquis Grissom cards for me. What a great guy! I'll save myself a minute and snag his picture: 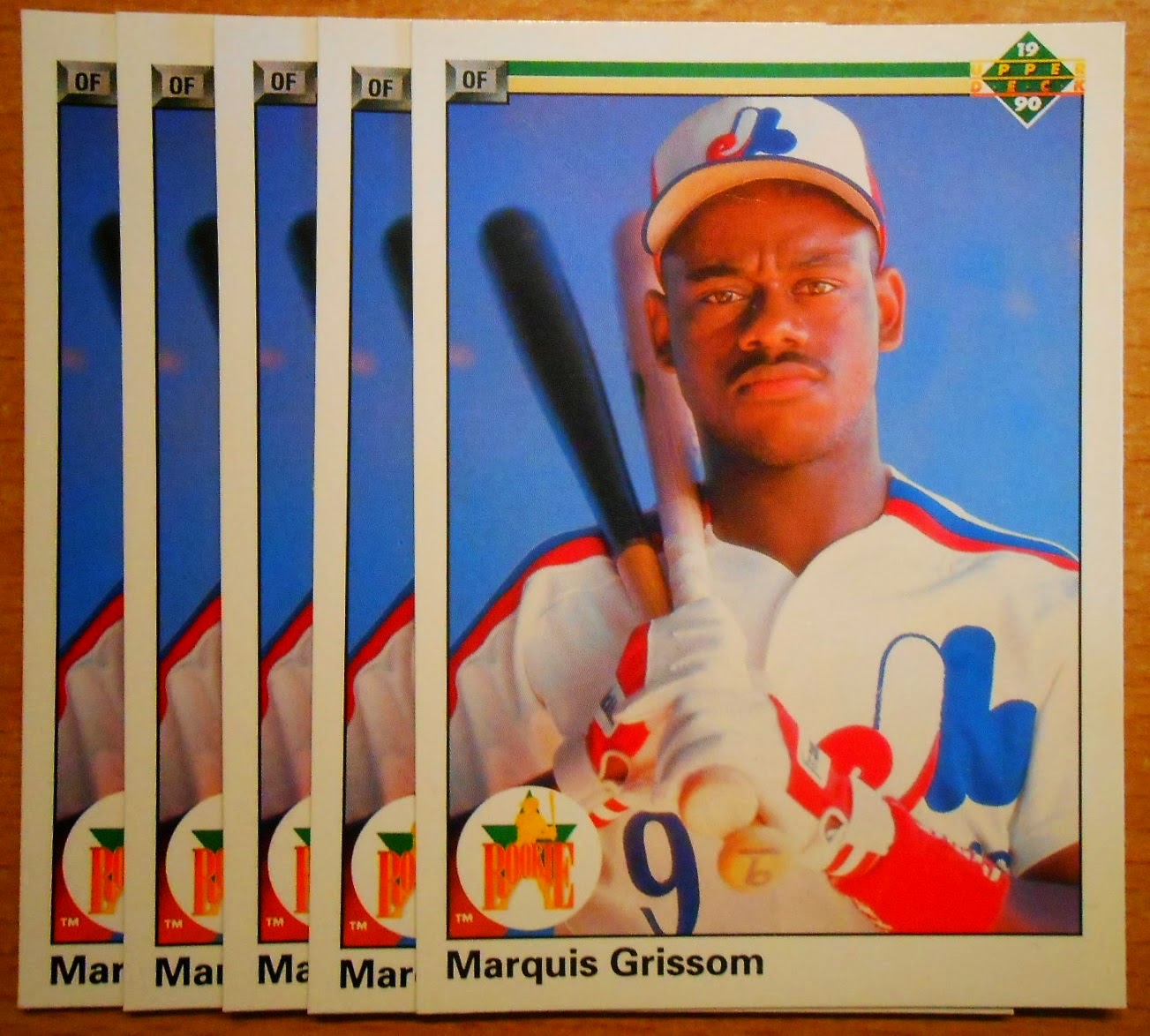 Big thanks again, Tom! I hope to find something to send you back before long (If I've posted any trade bait that caught your eye, just let me know.) I'll have to do an update post on my Marquis Mania project one of these days and see how close I am to my lofty goal of 1000 copies of the card.

Finally, John from Johnny's Trading Spot commented on my recent dimebox dig and said he'd make me a super good deal if I sent him the '73 Kellogg's Ralph Garr and '86 Fleer Paul O'Neill / Kal Daniels rookie. I should have mentioned at the time that yes, the '73 Kellogg's stash is essentially all trade bait (I like 'em and all, but really just threw them on my stack with the intention of beefing up my trade box). The O'Neill, on the other hand, I was a bit reluctant to part with. But who am I to pass up an offer to turn 17.5 cents into a super good deal?! I threw in a few random Braves to get my Forever stamp's worth and awaited his return mail.

Johnny delivered (via the postman) a nice assortment of cards highlighted by a couple fine specimens of vintage cardboard. 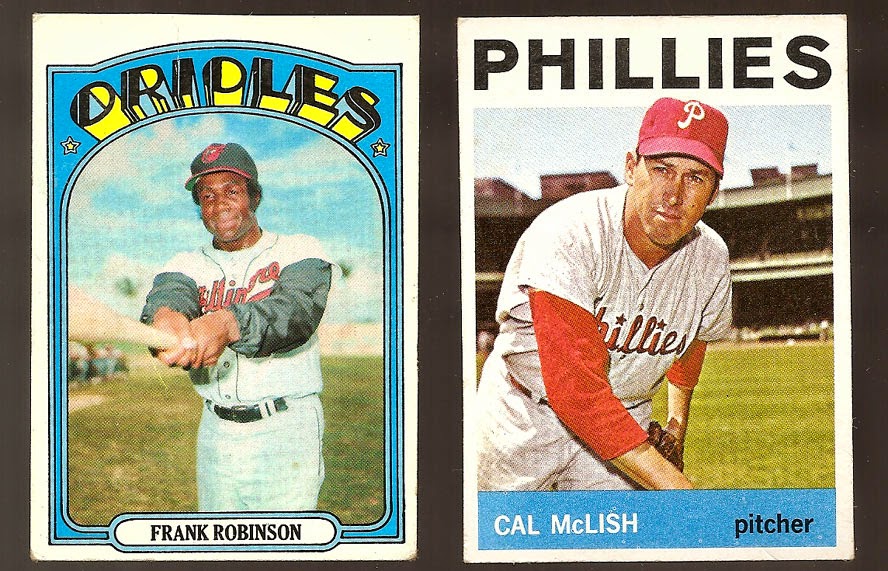 Sweet 72 Frank Robinson! And that 64 McLish is in really nice shape, too.

Thanks for the trades, guys! And thanks to you, the reader, for reading.

Don't forget it's Pull-Tab Awareness Week. If you're wondering, these guys didn't use top-loaders, but instead team bags or cut-up binder pages, so pull-tabs are not applicable there. (Good move by these guys; using top-loaders in PWEs is dangerous, as the postal sorting machines often get stuck on them and chew up the envelope.) Most blogosphere traders are pretty good about protecting cards they send out. It's really ignorant eBay (and Listia, etc.) sellers that are the most dangerous with their negligence. It's enough to almost make you want to preemptively send a message right after you win a card, asking for it to be shipped well protected and with pull-tabs for easy removal. But then you'd risk offending a jerky, easily-offended person. It's an unfortunate situation. All you can really do is focus on education. That's why Pull-Tab Awareness Week is so important and I'm calling on you all to help me get the word out. 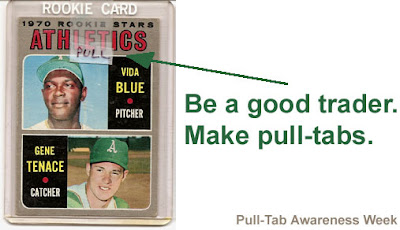