Here are some harsh truths that might go against how you grew up thinking:

- Sitting around the campfire is fun, but it's bad for you. The tiny particles from burning wood are terrible for your lungs and can lead to cancer.

- Don't feed ducks bread. It's fun to have them swim/waddle up to you, but bread really isn't good for them, plus it encourages dependence on humans that is dangerous for them.

- Frozen-food boxes should be thrown away, not recycled. They are treated with a coating to help maintain box structure and prevent freezer burn, and it makes them not recyclable and just a hassle for recycling plants to deal with.

- Santa isn't real. There's no such thing as magic. The earth is a cold rock spinning around an indifferent sun as mankind hurls itself toward extinction at an alarming rate.

- And Dick Allen isn't really wearing a Dodgers uniform on his 1971 Topps card. He's airbrushed from a Cardinals uniform. 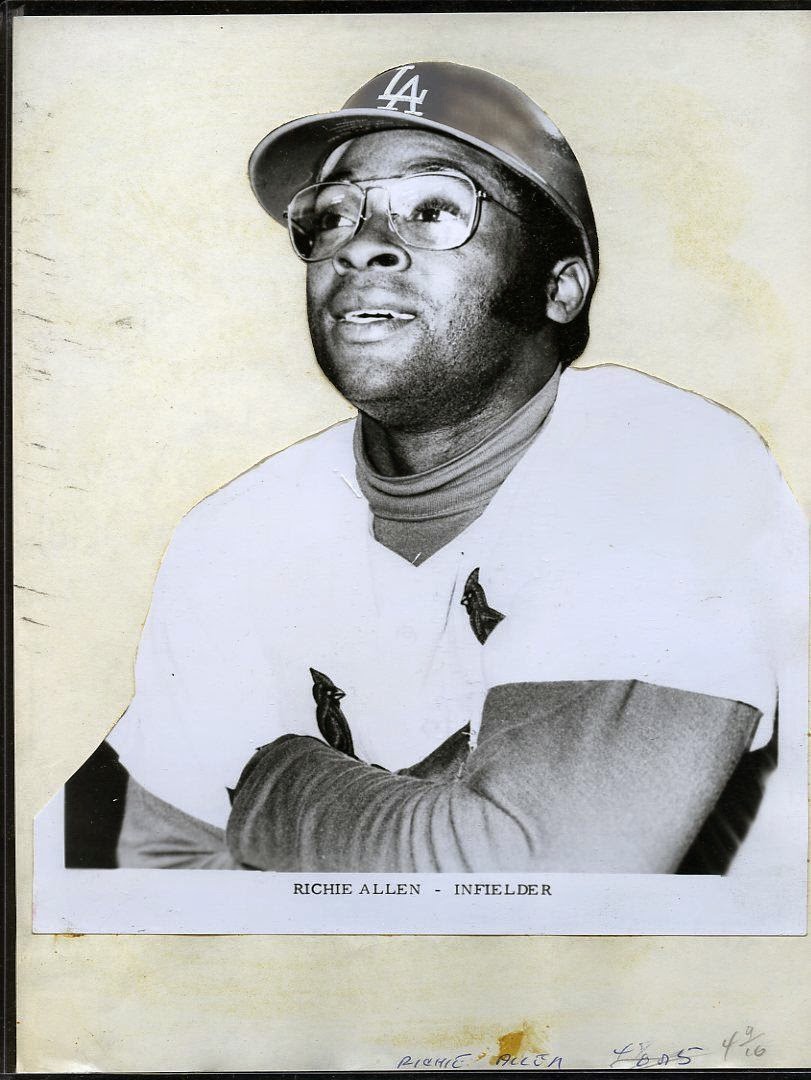 This is the original "match print photo" used on the back of the card, courtesy of a recent Topps Vault eBay auction (I gave it a good go, but wasn't willing to shell out quite enough to win it). Notice the blurring on the helmet to arise suspicion, then the birds on the jersey to remove all doubt.

I knew Allen's 71 Topps card photo seemed a bit off, but I wanted to believe it was a legitimate picture of Dick Dodger in the 24½th Century (too bad that never took off as a nickname). Sure, he just joined the team that very year, but it was a high-number card (7th series), so certainly within reason to think Topps could have gotten a spring training or early season photo to use.

But nope, more lies fed to us by the powers that be.


There you have it. Dick Allen doesn't have any real cards as a Dodger. We all just have to accept it. (He just spent one year in Los Angeles; in 1972 Topps, he's airbrushed into a White Sox uniform.)

His only real card as a Cardinal is his 1971 Kellogg's, but not even Kellogg's could save the day this time.

Dick also doesn't have any real cards as an Oakland A. Or even any fake ones, for that matter. Just fan-made jpgs of cards that never were.

But wait! I may have been hasty with my verdict here. These 1971 photos were not taken at the same time. Note Dick's lack of mustache on the back photo. And I'm no stadium expert, but I believe that's an empty Dodgers Stadium in the background of the front photos, right? So maybe it is a legit shot of him in Dodger blue. But wait another minute. Look at the tops of his shoulders.. Looks to me like Dick's been cut and photoshopped (or the 1971 equivalent of photoshop) onto a fake background. The shadows seem off to me, too. And look how dead the field looks! That photo couldn't have been taken anytime near the season, right? The groundskeepers gotta have more self-respect than to let that happen. Hmm... Not sure what it is, but something funny's going on there.

But hey, wait.. turns out there are other photos from that same Dodgers Stadium shoot out there-- ones that definitely look real, such as this postcard: 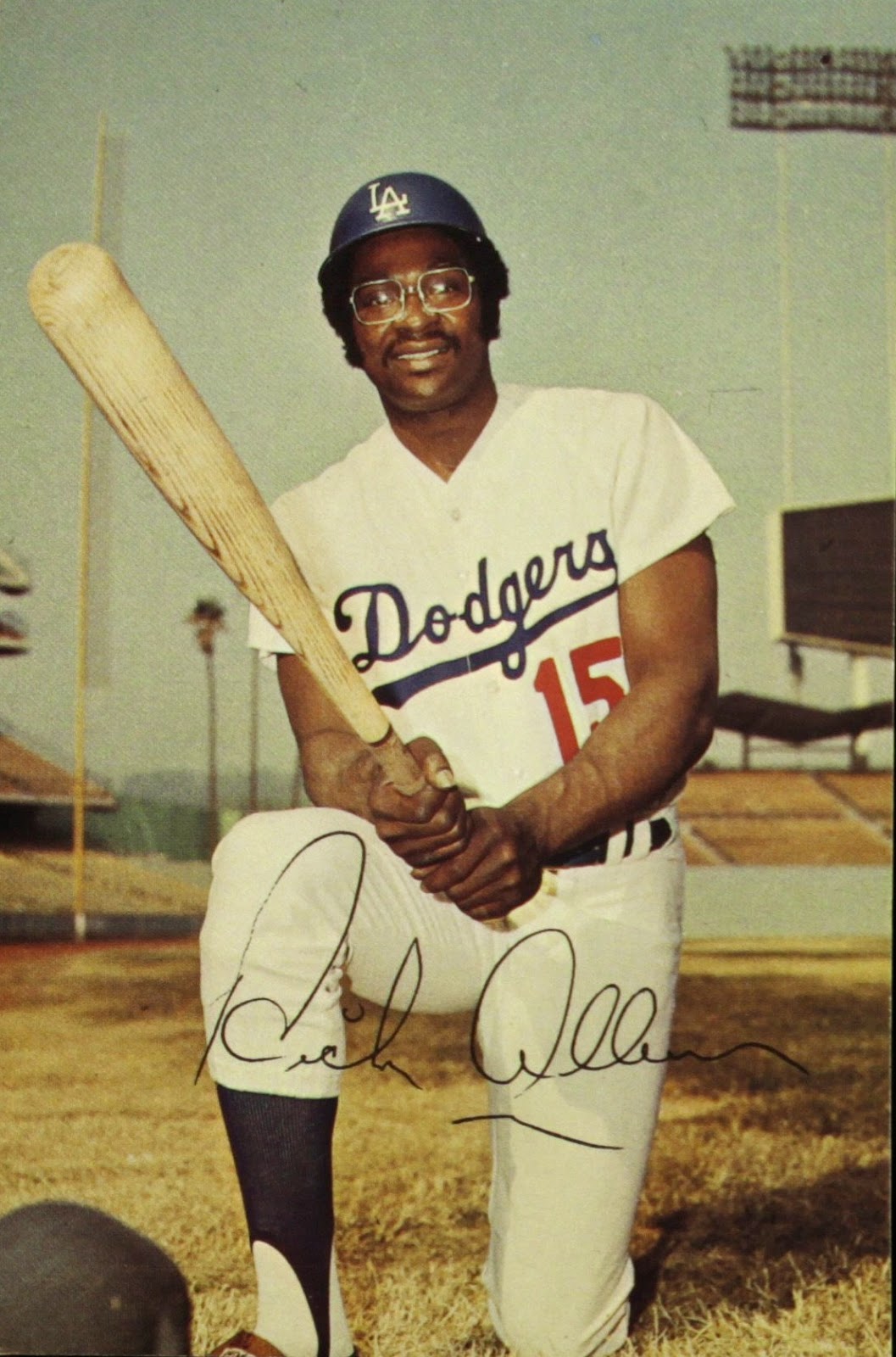 Here's another, apparently put out as a collectable stamp: 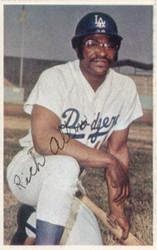 So ok, based on these other photos, I'm willing to retract my previous statement that the front photo has been airbrushed. Maybe they just did some touching up that made it look weird. But yeah, rest easy, guys, Dodger Dick is essentially real. Half real, at least.

But when was this photo taken? Let's go back to the mustache. Are there any other cards in 1971 Topps featuring a guy with a mustache?! Correct me in the comments if I'm wrong, but this might be the first modern baseball card to break the clean-shaven barrier. Are there any mustaches in 1972 Topps besides Reggie Jackson, who often gets the credit for being the first post-war ballplayer to sport facial hair? This spring training '71 picture (with Japanese baseball great Sadaharu Oh) shows Dick sans stash (source): 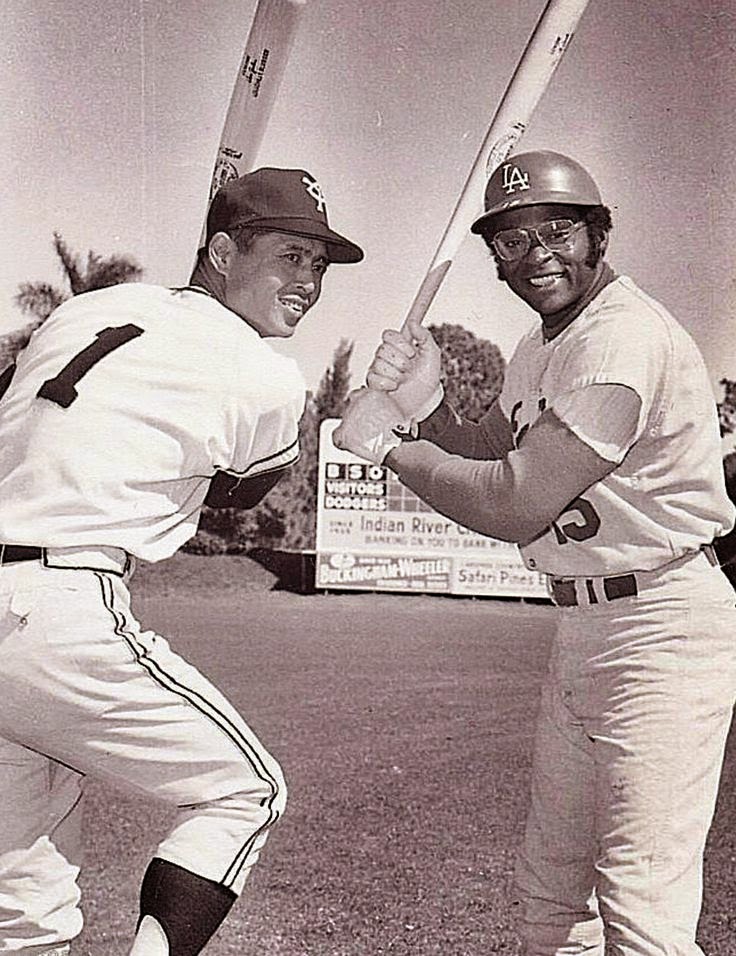 Other pictures I've found of Allen from the 1971 season are also without stash. The 71 Topps front photo must've been before he had to shave it off, perhaps even before spring training.. Like a special off-season promotional photo session? So while we can agree it's not airbrushed from a different uniform, there's still some mystery surrounding this card.

Moving on..
Speaking of 1971 Topps, this past weekend I took the time to sort out what I've got from the set enough to fashion a rough wantlist. It's now "live" and you can find it here. It reflects what I had in my "commons" stack, though I still need to pull out the star cards from elsewhere in my collection.. I know I've got the Bench and the Frank Robinson, among others. Back when I first made completing this set an official goal of mine, I estimated I had about 200 cards already. Another harsh reality set in when I realized that was an overly-optimistic estimate, and in reality I'm just over 100 cards deep. Still a whopping 86% of the set left to go. Dang. This'll take me a while, even with no regard for condition.

So yeah, let me know if you've got any 71 Topps to spare. And again, I'm working on an off-condition set, so I am not concerned about what shape the cards are in. Writing, rips, whatever.

And by the way, I actually did just now win that "match print photo" at the top of this post. I typed up in advance that I didn't win it because I really wasn't expecting my modest sniping bid to be enough, but hey, it was! Cool. Sorry for jerking you guys around so much in this post. Thanks for taking this journey with me.
Posted by defgav at 7:11 PM