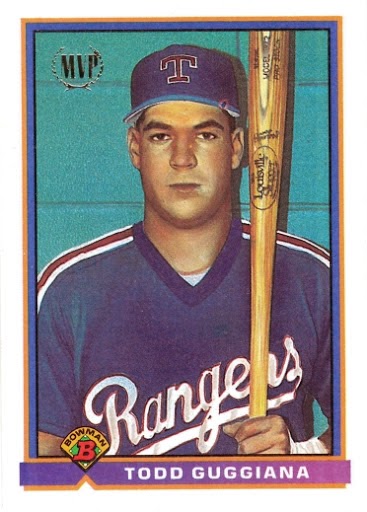 This is a sketch card that somehow made it into 1991 Bowman.

Allegedly, there was a man named Todd Guggiana.. never a legitimate prospect, really.. just some guy who was a 19th round draft pick in 1990 and never made it past AA in a brief professional baseball career. But he managed to get a baseball card-- with a foil "MVP" stamp on it, even!-- thanks to a strong campaign at Butte in rookie league in 1990. 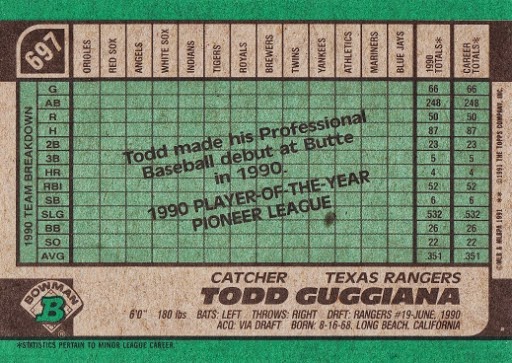 Here's one of the very few known real photos of Todd G: 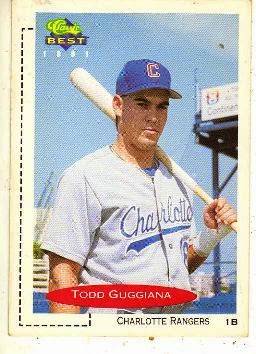 I've actually got this factory set.. as does everybody, so it's worthless.. but still cool, what with the Pedro and the one throwback Mike Schmidt.

Todd is turning 46 this Wednesday! Maybe give him a set of watercolors for a present and he can make a card himself. Apparently he's been a scout with the Rangers for many years. Here's what he looks like these days (via facebook): 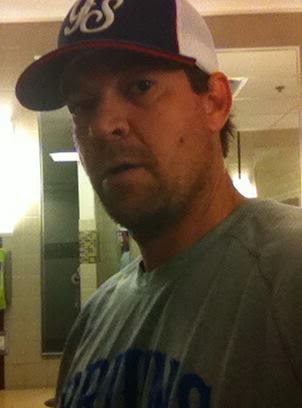 I'll bet from time to time somebody will ask him to sign his 1991 Bowman card and he just has to look at it and sigh, shaking his head. "I'm signing someone's high school art class assignment." But hey, at least he got a baseball card in a mainstream set, and it's even designated a special "MVP" subset, so that's something to be proud of, I suppose.

I think it should be a rule that all baseball cards state on the back who, if anybody, doctored the image on the front. The painters of the first part of the 20th century.. tobacco cards and whatnot.. sadly lost to time now. And all those nameless airbrush artists from the 60s, 70s, and 80s.. probably for the best that they stay anonymous. And the Photoshop pros used today by Topps to "update" uniforms, or used by Panini to wash away identifying features of uniforms.. These guys should be acknowledged much like in the credits of a feature film. Maybe at least on the company's website or something. But ideally just a little sentence on the back of the card near the copyright information.. "Photo manipulation by Joe Smith." If that was a thing, us collectors would likely have our favorites (and least favorites). Maybe even supercollectors who would go after all cards photoshopped by a certain guy. That'd be funny. But all things considered, I think most collectors would agree, "Don't mess with the photo.. who cares if the uniform is 'wrong'?! Better that than a weirdly edited picture."

And yeah, that brings up the point that the photographer should be listed on the back of a trading card, too. And not just "Photo by Getty Images", but the actual person's name. Oh, in a perfect world.
Posted by defgav at 12:32 AM