Scribble Showcase of some 2005 Topps Retired

Topps issued three consecutive Retired Signature Edition sets in the 00s. The middle child, 2004 Topps Retired Signature Edition was the first set I went nuts for after returning to the hobby back around 2012, as I've talked about in the past. I thought the first offering, 2003 Retired, was pretty decent, too. But it took me a while to warm to the third-and-final installment put out under the Retired banner, 2005. The cards just didn't look as good. My main complaint was I felt the autos suffered from a grayed-out box rather than a white area to help the autographs pop. Sort of makes them look like sticker autos at first glance. It's also dumb that the "Topps Certified Autograph Issue" logo is in the autograph area, getting in the way and taking up space; should have been in a top corner instead.

But on the plus side, the 2005 Retired set has a pretty interesting player selection, with guys you don't see with certified autos very often. Plus the cards definitely seem to be more plentiful than the earlier two sets, and often less expensive. And perhaps due to persistently popping up in my eBay searches (and me stalling on my 2004 Retired goal now that I'm down to just a few scare/expensive autos left to find), I eventually started to embrace 2005. While I don't plan to try to collect every auto in the set, I'm happy to throw in reasonable bids here and there on cards of guys I like. My first foray into the set was Lou Brock a few months ago. I've shown off a couple others recently, including the late, great Bob Welch and an unquestionable highlight of my card collection, Nolan Ryan. But now here's a trio of (the several) other 2005 Retired autos I've added over the past few months. With the exception of that Ryan, these each cost me around $5-15 delivered, which I consider pretty reasonable for a nice on-card auto of a well-known name from yesteryear. 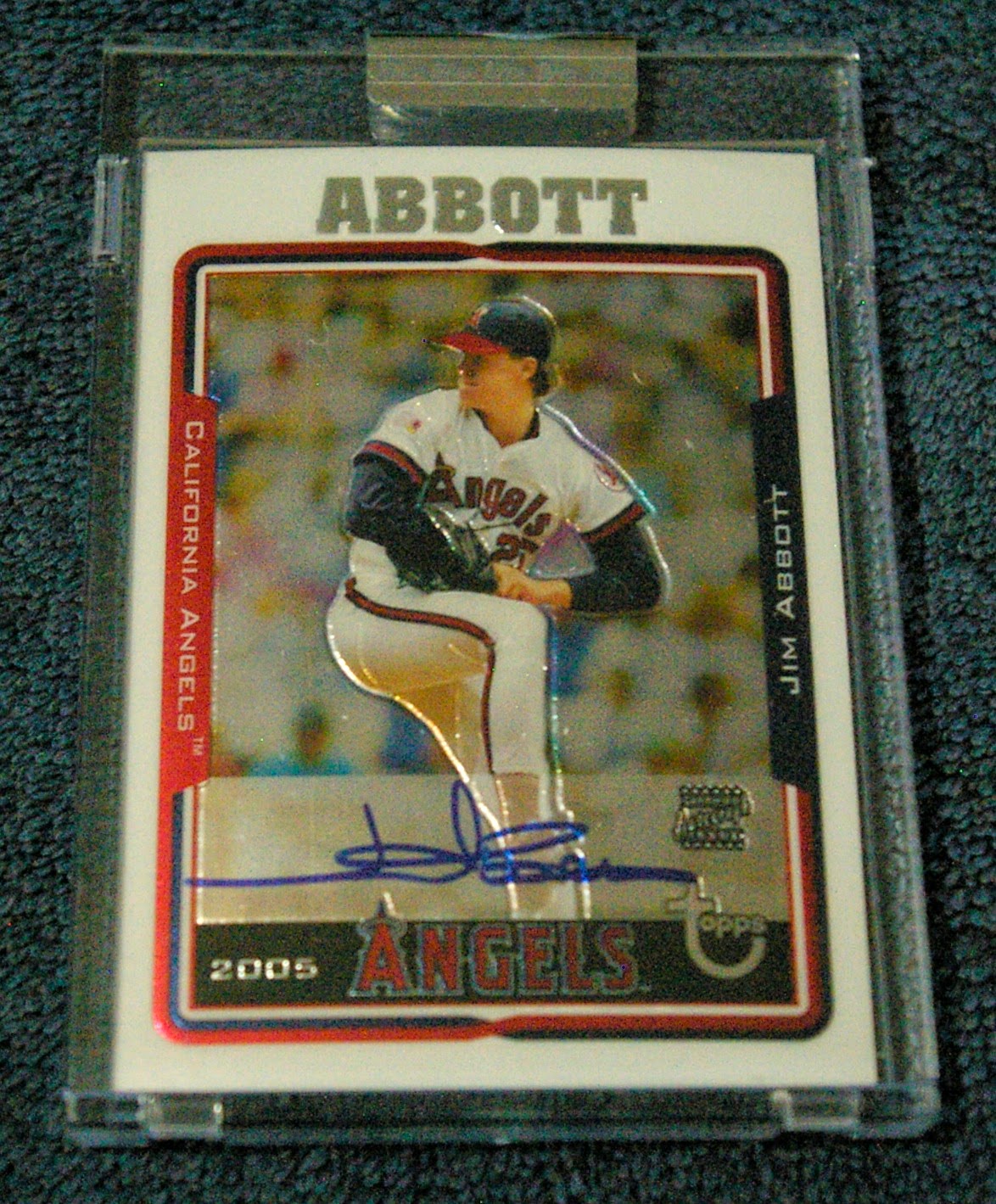 You gotta admire Jim Abbott for accomplishing everything he did despite only having one hand. It's still pretty amazing when you think about it. Only Tony Lewis, a minor leaguer who incredibly was able to play the game despite having no bones, according to The Greatest 21 Days blog, can top this story of overcoming a birth defect. Abbott's best years were 1991 and 1992, winning 18 games in '91, and putting up a 2.77 ERA the next year. He threw a no-hitter in 1993. Most impressive may be how he was so adept defensively, leading AL pitchers in assists in 1991 and fielding percentage in both 1992 and 1995. He's a member of the Michigan Sports Hall of Fame and the College Baseball Hall of Fame. Without question, an outstanding athlete and admirable human being. And now I've got his autograph! 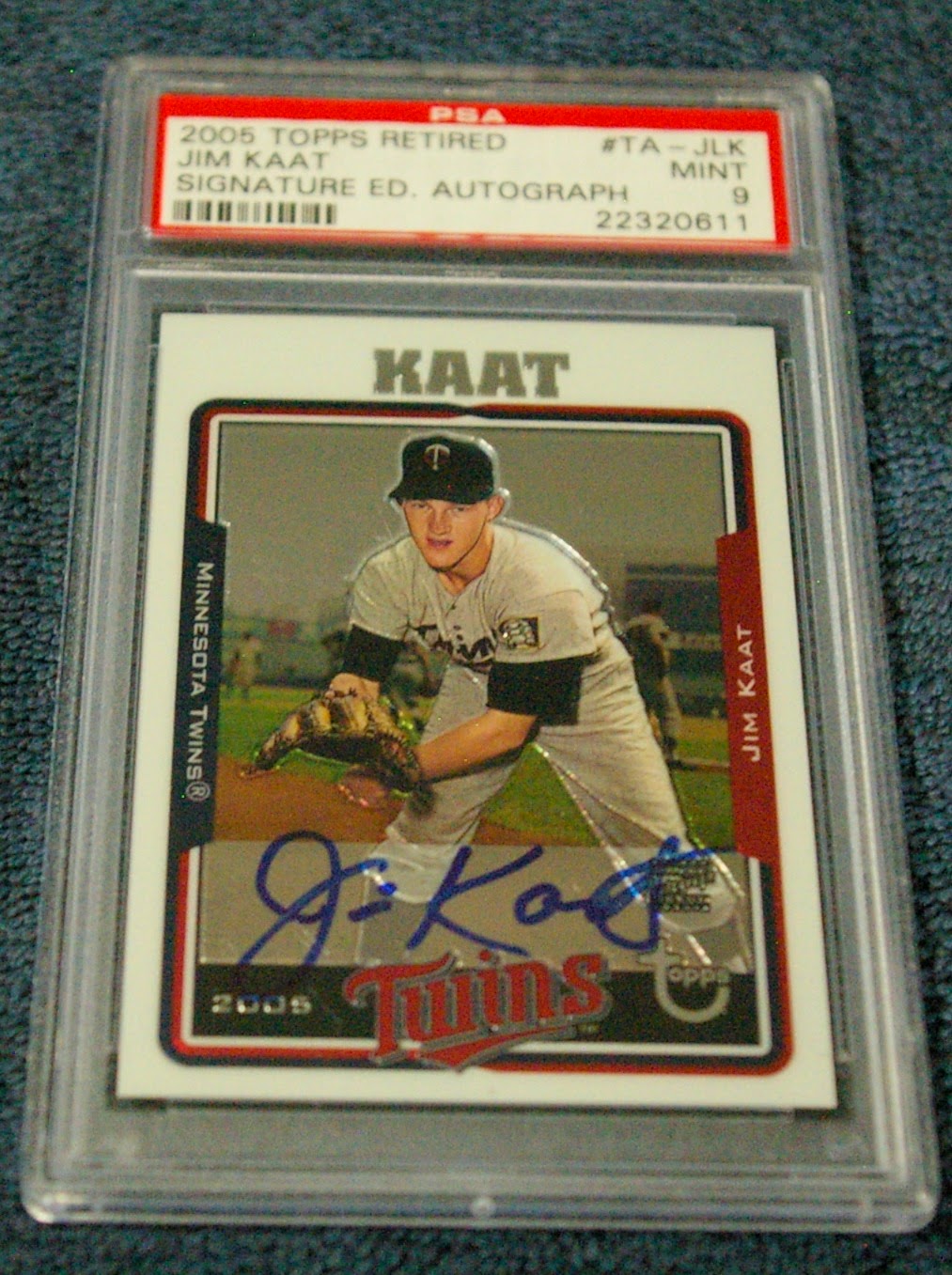 While Jim Abbott didn't have much longevity in the game relative to other star pitchers, playing only 10 years professionally, this other Jim was a major league pitcher for a whopping 25 seasons. Wow! He's neck and neck with Tommy John for the title of most accomplished pitcher eligible for Cooperstown but not enshrined. Kaat retired just 17 wins shy of the magic number 300. He stuck around long enough to get a ring in his last full season, a key part of St. Louis' bullpen in their Championship season of 1982. He also smacked 16 home runs in his career, good enough to crack the top-20 all-time for pitchers. And he racked up 16 Golden Gloves. Pretty impressive. And now I've got his autograph! 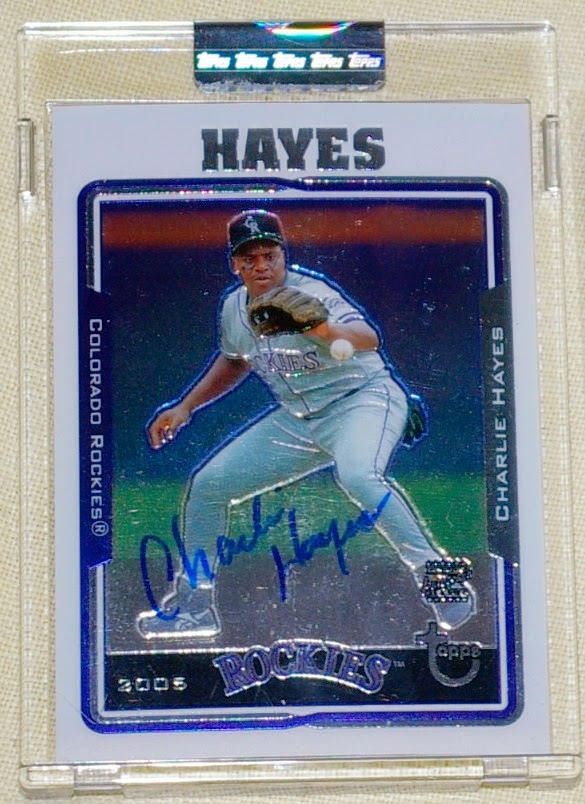 I picked up this card in part to be a possible prize for fellow blogger hiflew in my most recent round of contest mania a few weeks back because he begrudgingly mentioned a couple times that there were no Rockies in the Retired sets. But to be honest, I'm kinda relieved he didn't win because I really like this card and would be sad to part with it. I always kinda liked Charlie Hayes during his playing career. He was scrappy and although never an All-Star, he managed to claw his way onto a major league roster for 14 seasons. The highlight of his career has got to be catching the final out of the 1996 World Series. And now I've got his autograph!

That's all the scribbles to showcase today. See you next time.
Posted by defgav at 7:58 AM