Pat over at Hot Corner Cards is having an "epic break" blowout of his trade stacks, attempting to turn his unwanted cards from other teams into Detroit Tigers cards (or if not, $5 to cover rehoming costs). I had a reasonably fat stack of Tigers and had been meaning to get an initial trade going with him, so this was the perfect opportunity. I shipped them off on Saturday, and somewhat surprisingly, they had shown up by Monday.

I received a nice package of cards from him a couple days later, and while this could be 2 or 3 separate posts, strap in for a long, rambling post. (Are my posts too long? As a reader, I often like short "here's a card; I like this card" posts, but as a writer, I usually tend to ramble on a bit. I'm very quiet and shy in person, funny enough.)

As I've mentioned before, group breaks like this are tricky for me because I'm not strictly a team collector. I fight with deciding to take teams that, a) would give me the best chance at "good cards" for my collection, b) teams I trade away often and therefore have a shortage of in my trade box, or c) Padres, the sentimental favorite.

Between the huge lot Rod from Padrographs dropped off on me a couple months back, then the big lot from Dennis at TMV, and various other trades and pickups here and there, I've got a pretty big surplus of Padres. I'll usually go through each incoming lot and end up picking out maybe a third that I care to keep in my collection. Team collectors out there might think it's blasphemy, but I really don't need any cards (much less dozens of dupes) of guys like Stan Jefferson, Tim Teufel, and no names who never did much in their handful of games in bigs. And while there are a few other Padres card bloggers/collectors out there, these guys are pretty much in the same boat and already got these cards if they had any interest in having them. So I don't know what to do with my surplus of 1989 Topps Padres commons, for example. I'd hate to toss perfectly acceptable cards. They would cost much more to ship than the cards are worth. I could try giving them away on Craigslist, but I'm not sure anyone would take them. I know it's a dilemma that gets brought up on the blogosphere a lot.

So anyways, my point is I've got hundreds of Padres cards I don't want. I made a comment on Pat's blog along the lines of "I normally take the Padres in situations such as this, but I've been getting burnt out on them lately."

Instead of picking a team, I went with the Goodwin Champions wildcard lot he had available in an attempt to get a sampling from several teams. I don't have much Goodwin Champions, so seemed like a good chance to check that product out. Honestly, the set kind of creeps me out. I've never been big on painted cards (old vintage excluded).. but like Diamond Kings and early UD checklists? Never was much of a fan. But whatever, I figured there must be a few guys I collect in there with cards I need, and the rest could be funneled into my trade box. And that's exactly how it went down.

But I'm getting ahead of myself, Pat was kind enough to dump his Padres on me despite my best efforts to avoid asking for them. LOL. But as expected, there were several cards in there I happily plucked out to make their way into my collection. Here's a scannerbed-full of highlights: 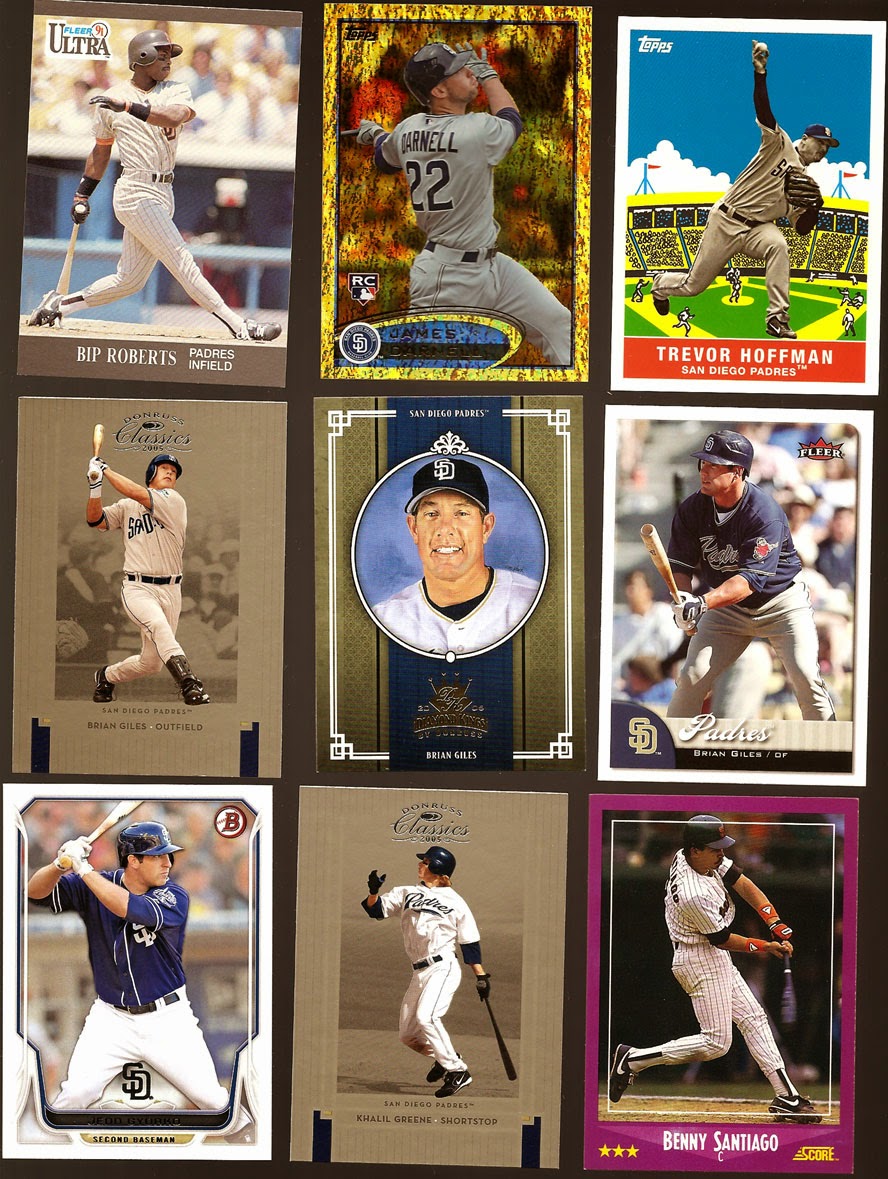 A Bip I think I needed!

I have so many cards of Brian Giles. Only Gwynn and maybe Trevor could outnumber him as far as most Padres cards I have from one player. I like Brian, though, and in addition to being a former Padre great very-good, he's also among the few players in a new mini collection I've been having fun building lately: guys who went to my high school. Expect to see some blog posts on the subject before long.

And check out that Benito at the bottom. I've always thought that 1988 Score was a nice set that could have been vastly improved by simply #1) having a print-run not so goshdamn huge, and #2) getting rid of or having the player's photo in front of that unnecessary white line along the border. Compare that above Benito with this crudely photoshopped example: 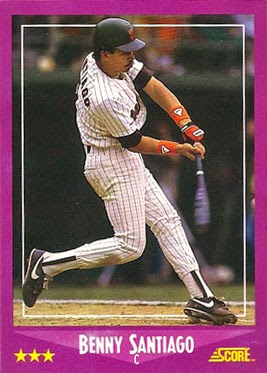 Doesn't that look a lot better? Really helps the image pop, whereas everything being behind the white line just flattens it.

But back to the Goodwin Champions lot, yep, these are ugly-ass cards, but there're many dudes in here I collect, therefore I'm happy to be able to add new cards to a few PCs. 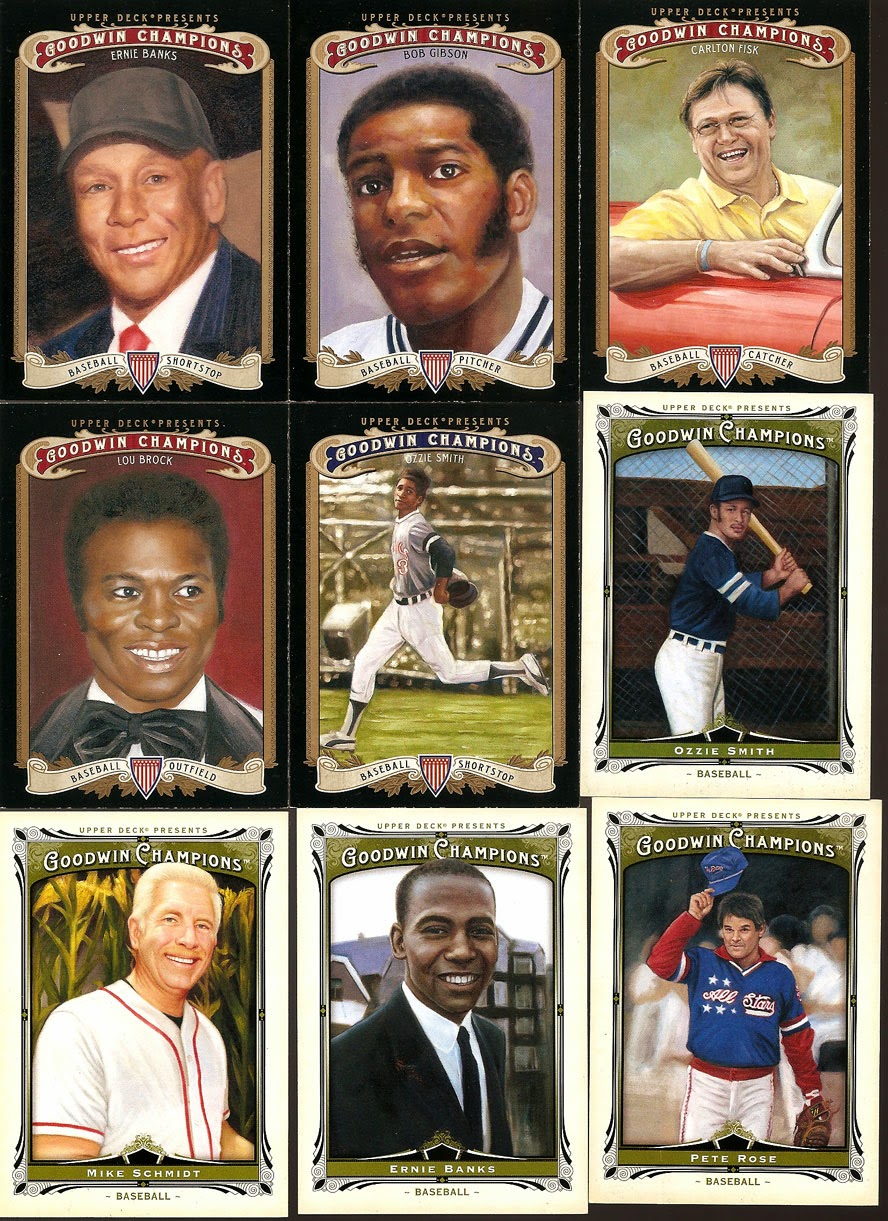 Were you able to make it through that scan without shuddering? If so, seek help.

Also included with the Goodwin Champions lot were several non-baseball A&G cards. I'm sort of neutral on these cards, but there are some I kinda like, and honestly, if I were to join a Ginter group break and I had first pick, I'd probably take the non-baseball cards. Some of them are pretty neat. But of course you get some good...

Ugh! Who besides these two guys themselves and their respective mothers would ever want to own either card? It's gross and makes you curious about the subject selection process over at Topps. Would love to see an in-depth article or documentary that raised the curtain on the behind-the-scenes inner workings. It's weird that baseball card companies, Topps in particular, always seem so clandestine.

I love Topps n' all, historically speaking, but I don't think I'd be that crushed if Panini eventually gets the MLB exclusive license, as some have speculated might happen once Topps' current contract runs out. It'd make things interesting, at least. Regardless of what you think about their products, you gotta admit Panini seems to be trying harder to connect with fans/collectors. Seems these days Topps has most of their customer service focus on Topps Bunt, something I have no interest in. I wonder if Topps would go the logoless route, or perhaps use the Goodwin Champions method of non-uniformed pictures (paintings) of ballplayers (and non-baseball athletes). Perhaps we'll see the day where Ginter is 100% animals, historical figures, actors, inanimate objects, and other non-players.

But anyways, thanks a ton for the cards, Pat! Keep it hot on that corner over there.

I think he's still got some teams available, so if you've got some Tigers to dump, he's your man.

UPDATE: Stop the presses! Just now got this bonus card from Pat in a PWE: 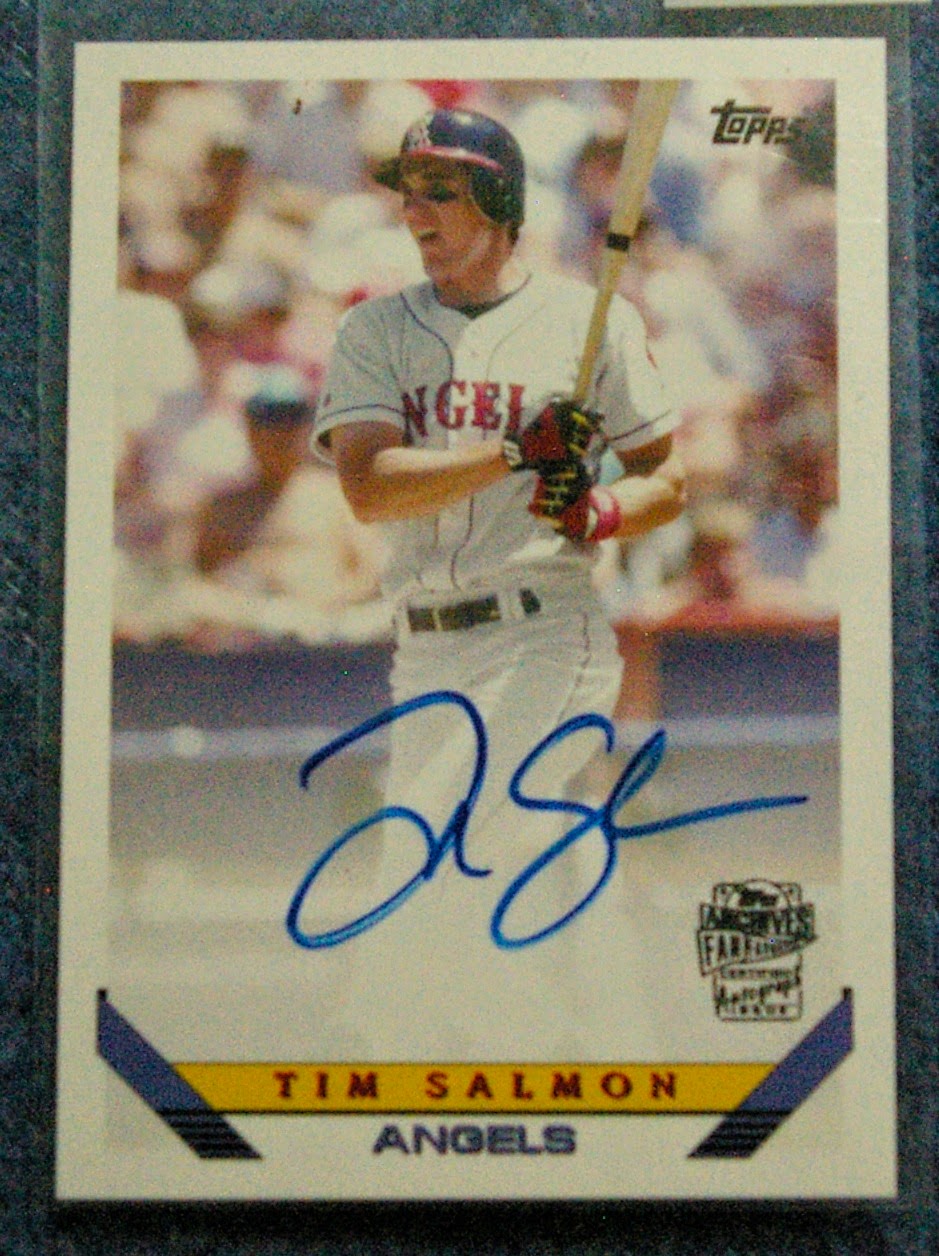