Getting scientific with card thickness (Is Archives REALLY so thin?) 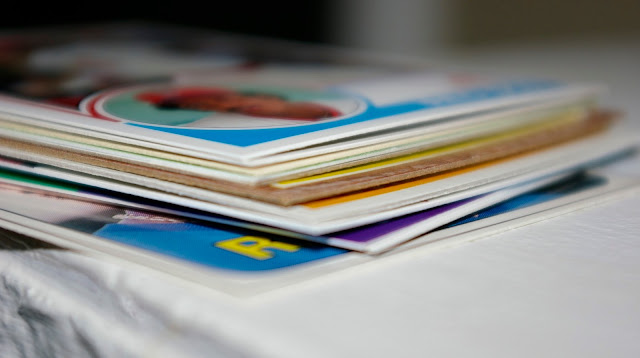 A lot has been made recently of just how thin the card stock is for 2015 Archives. But is it really that crazy thin, or are people just overblowing it? I happen to have access to medical-grade diameter measuring equipment. I brought in a few cards from various sets, and today on my lunch break, I tested the thickness of each. Let's see how they measure up! 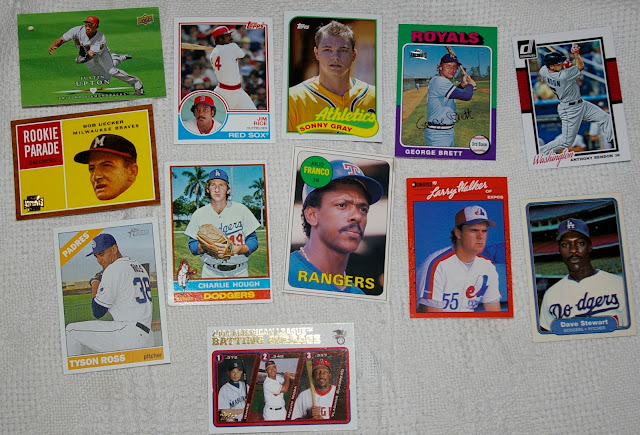 As for my methods, I got two readings from each card (one on the top half, one on the bottom half), averaged the two, and rounded to a hundredth of a millimeter.

No surprise the thickest cards I tested were 2001 Archives (0.65mm) and 2015 Heritage (0.63mm). If you like a hefty cardstock (and not those ridiculously thick high-end cards), Heritage is the brand for you. And the "old school" version of Archives is probably one of your favorites, too.

2014 Panini Donruss delivered a sturdy card as well, measuring 0.53mm. (Prizm is Panini's extra-thick brand, but I didn't test any of that.)

Ok, now what you've been waiting for: the modern Topps Archives! Ready for this? The three I tested (2012, 2014, and 2015) were all measured at 0.41mm! So as far as my results are concerned, the cardstock has not gotten thinner.

Here's what I think is the reason for the perceived thinning. When 2012 Archives came out, the backs were just as glossy as the fronts. This makes for a sturdier-feeling card. Over the years, the backs for that product line have gotten less and less glossy. 2015 Archives has a downright matte finish on the back (and not much gloss on the front). Without a shellacking of gloss on the cards, they seem flimsier in hand.

Personally, I'm a bit sick of all the gloss on modern cards, so my fingers welcome the tactile touch of a matte finish on new cards from time to time. As such, I'm totally cool with the cardstock of Archives this year.

When I gave my little review of 2015 Archives, I mentioned holding the cards made me reminisce about 1990 Donruss. And 1990 Donruss happen to be the very first cards I ever ripped a pack of as a kid. So it's understandable that I'd get a little sentimental over cards with light gloss on the front and a matte back. It's been a long time since I opened a new pack of cards that felt like that! Really takes me back, sort of like how certain smells can trigger memories/feelings.

But back to the science! Two cards were significantly thinner than the rest. Yep, 1990 Donruss was near the bottom at 0.36mm. And the award for thinnest card I tested goes to the 1990 Baseball Cards Magazine card at 0.32mm. I admit this was a "ringer" I included knowing full well it'd be the thinnest. I mean, it's a free card cut out of a magazine, so what do you expect?!

So those are my findings.


Anywho... Time's running out to enter my big anniversary contest, so if you haven't commented on that post yet (or pimped it for a bonus entry), get on it!

Speaking of anniversaries, my wife and I celebrate our first year of marriage today. Still going strong, happy to say! We weren't able to come up with anything fancy to do (ideas of a weekend trip to the coast fell through), but we'll at least open a nice bottle of wine that's been waiting for a special occasion.

Oh, and it's also the centennial of my grandfather's birth (fancy way to say he would have turned 100 today). He was a great guy. Talked about him a bit more back on that post showing off my Howard Hughes autograph.

Enjoy the rest of your day, everybody!
Posted by defgav at 4:25 PM