Easing the hangover with a 2015 Panini Contenders blaster

Had a wild weekend by my standards. My old bandmate Karie from back in San Diego was in town. She actually lives in Southern Oregon now, and may move to Portland in a few months when she finishes school. Anyways, I hadn't seen her in a few years, and we got together with our significant others on Saturday for an evening of pizza, booze, and catching up. She doesn't usually drink, but it was her spring break, so she was living it up and got pretty silly. I kept up with her for the most part, partying a little harder than I normally do. I'll leave out some incriminating details, but we ended up dancing at a dark goth club, complete with smoke machine, coffin, and a DJ of indeterminate gender cranking up Sisters of Mercy.

Fun night out, but needless to say, I was a bit hungover Sunday. While grocery shopping, I took a curious look, as I usually do, at the small trading card section. A blaster of 2015 Panini Contenders caught my eye. I've seen a couple recent blog posts featuring the product that were generally favorable, and the promise of 2 guaranteed autos in a regular-sized/priced blaster sounded good to me. I figured I could use ripping a few packs as a pick-me-up, so for the first time in 2016, I pulled the trigger on sportscards from the grocery store. 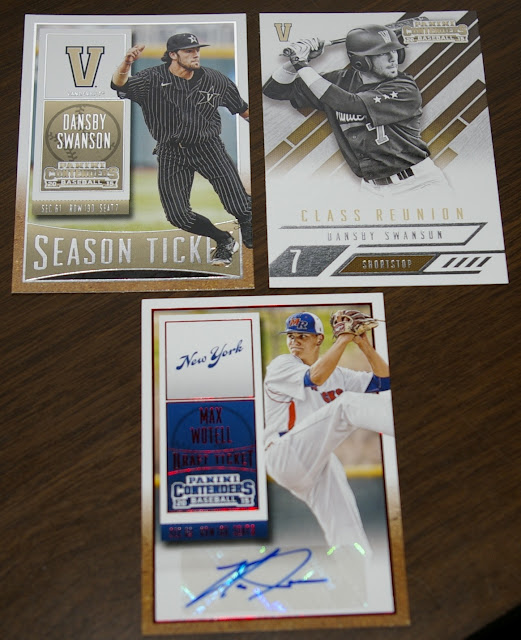 Part of me is hoping Dansby Swanson is a bust. Because if he's good, I might have to start collecting him, and I don't want to collect anybody named Dansby. No offense to you other Dansbys out there.
As for the first auto, Max Wotell was a high school lefty drafted by the Mets in the 3rd round last year. Not all that notable, but we'll see if he makes something of himself over the next few years.

A.J. Minter hot box! My second auto is among this trio of Minter cards. The start to his pro career has been stalled by Tommy John surgery before he was even drafted (taken by Atlanta in the 2nd round last year), but he's got high expectations for when he's finally ready to go.

Here are some young guys with names I recognized. 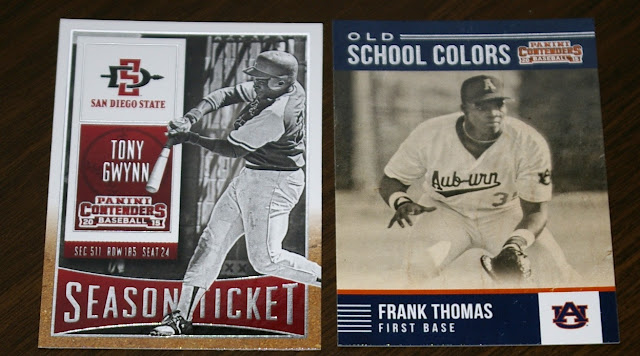 That Tony Gwynn card was great pull for me. I didn't even realize he was in this product, so it was a pleasant surprise. I obviously collect Tony, and SDSU Gwynn cards are an extra special treat.
The Frank Thomas is a cool PC addition as well (though as been pointed out already, seems dumb to put the word "colors" in the name of an insert set that doesn't feature color photography). Nice that they added some oldies to the checklist to broaden the appeal so it's not all just young draft picks. 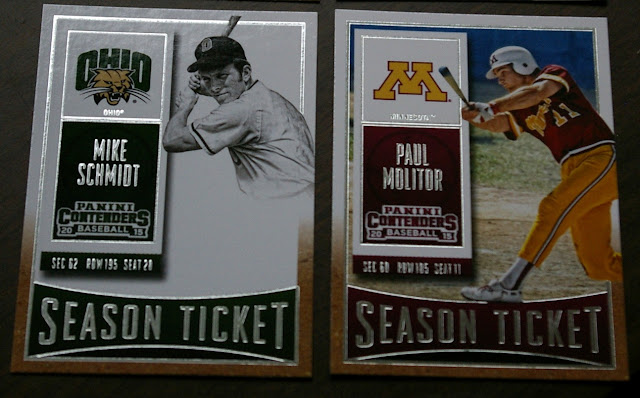 So that does it for the highlights. The rest were mostly kids I wasn't familiar with. I'll have to do some research to get them sorted by MLB team into my tradebox. Nothing huge, but as far as retail purchases go, this one was free of any buyer's remorse. The Gwynn put a smile on my face, the 2 autos were as decent as could be expected, and I got my first couple cards of hotshit prospect Dansby. So I'm counting this one as a win.

Thanks for reading. Big trade roundup post coming up hopefully tomorrow.
Posted by defgav at 3:59 PM