Haul of cards from Rod at the card show

Imagine you're at a card show digging through the bins, when someone comes up to you and says, "Here you go," and dumps a couple long boxes totaling around a thousand free cards beside you. That's basically what happened to me a couple weekends ago. It was the third time I was fortunate enough to be on the receiving end of fellow Portland-area Padres fan's downsizing efforts. I'm talking of course about Rod of Padrographs.

Sometimes he gives me more cards than I know what to do with. You know those "LaMarry Christmas" ornaments I spread around last Christmas? The 1987 Topps cards I used for those were from Rod.. just an example of the massive quantity of Padres he's known to kindly dump on me. I'd be lying if I said I had a use for all the various Padres cards I get, from Rod or well-meaning traders, though among the Terry Kennedys and Jerald Clarks I don't collect, there are usually plenty of Pads I do collect.. Bip, Benito, Templeton, and of course Tony Gwynn, to name a few.

Anyways, it's taken me a couple weeks, but I've digested the haul from Rod into some highlight groups to photograph and comment on, so let's do it! 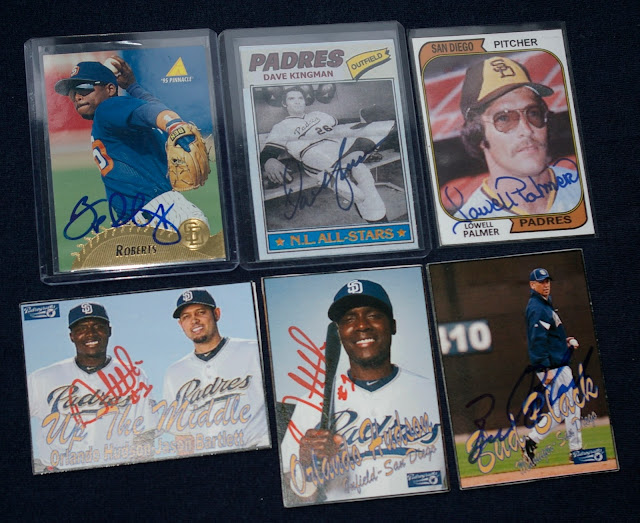 A nice little selection of autographs. Bip! The rest are customs of Rod's own creation. Just last month I showed off my own Dave Kingman '77 Padres custom that I got signed through the mail, now I've got another. Dig that lounging-in-the-dugout shot. Lowell Palmer is known for looking cool on his 70s cards sporting his trademark shades. Orlando Hudson won 4 Gold Gloves during his career, and spent a year and a half with the Padres near the end of his run. And Bud Black helmed San Diego from 2007 until getting canned last season. It looked like he was about to sign on to manage the Nationals recently, but he thought their offer was too low and then Dusty Baker slipped in and snagged the job, leaving Bud to settle on a front office position with the Angels, with whom he was pitching coach prior to his Padres tenure. I've got nothing against Bud, but I was also never much of a fan either. I'm hoping new skipper Andy Green can work some magic and help the squad contend this year. 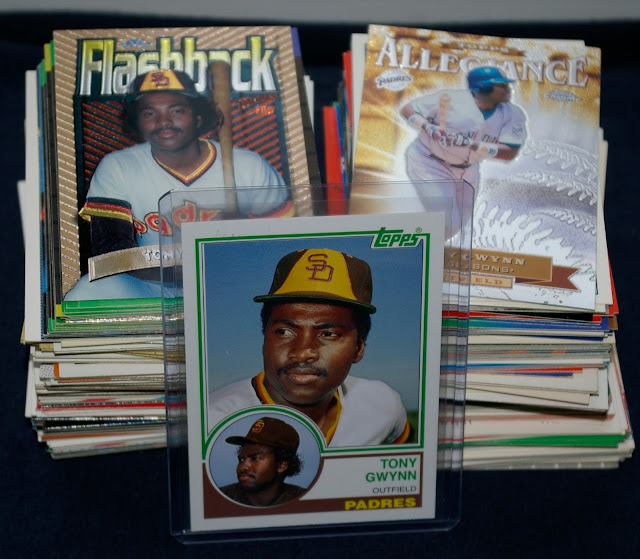 This? This is all Tony Gwynn cards. Probably a couple hundred cards here. Sure, some multiples and plenty of cards I already had, but still a lot I needed. 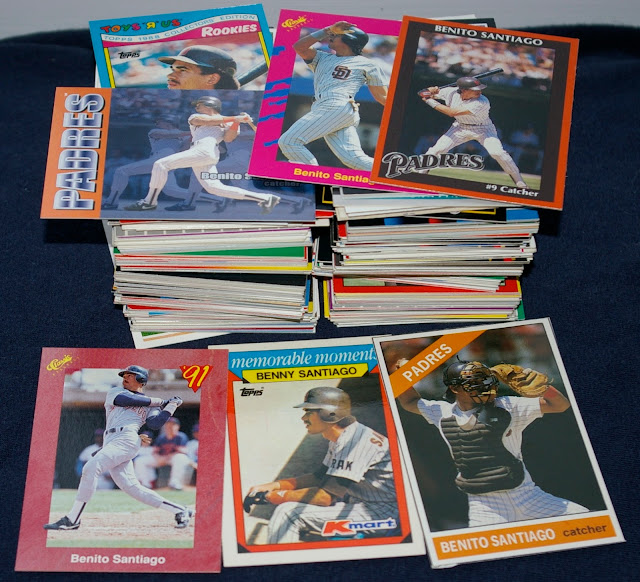 And here are a couple hundred Benito cards! Thanks to this lot, I think I can call my Benito collection Finito. (Oh, that's a clever turn of phrase! I need to do a post of my PC and I'll title the post "Benito Finito" or something along those lines.) Maybe I could use some more of his later career cards, but I think I'm good on Padres/junk era now. 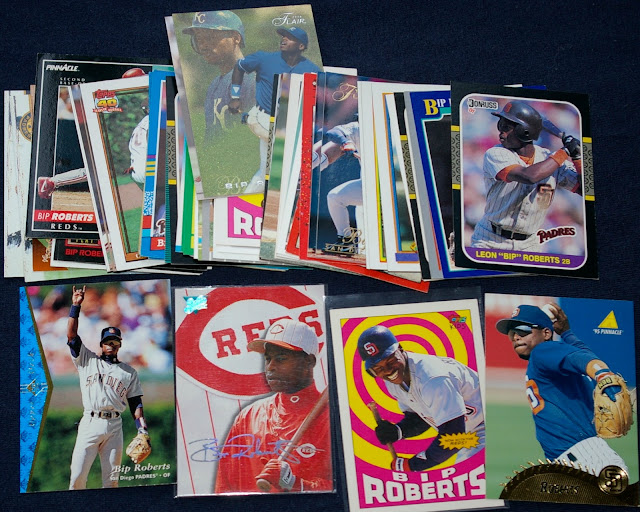 Bip! Always a favorite. I think this lot bumped me over the 100 card goal. 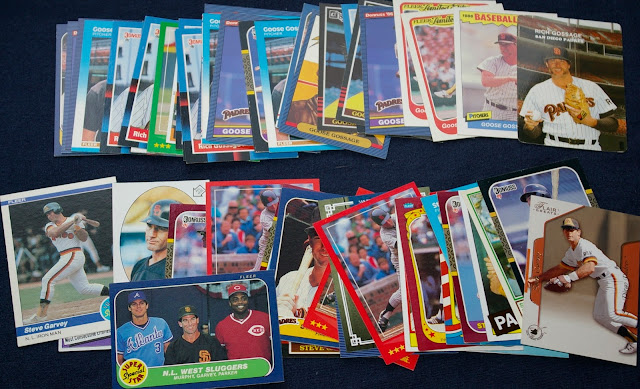 Mid 80s Padre favorites Goose and Garvey. Goose was in the news recently for a tirade against today's game. Didn't seem like very many were in his corner. 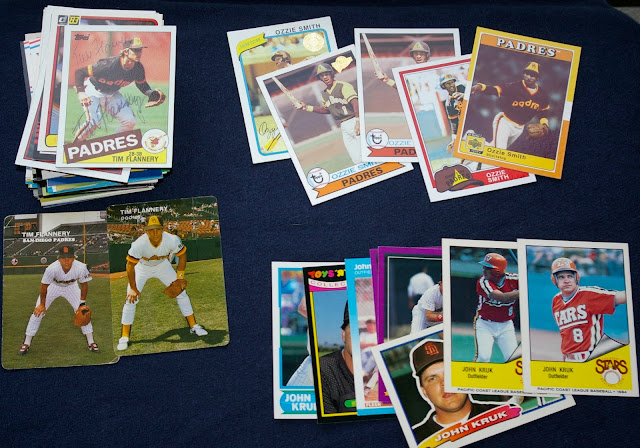 More Friars of yesteryear, including Tim Flannery, Ozzie Smith, and John Kruk. Looks like Flan triple-signed that 85 Topps card.. like he signed it once.. wasn't happy with the pen, then traced that signature.. decided it looked bad.. then signed it fresh again. Speaking of being in the news recently for a tirade, Flan typed up an angry post aimed at Padre fans who hassle him for selling out and going to the Giants or whatever. Personally, I never had a problem with the guy and definitely didn't blame him for following Bochy up to SF when he got pushed out. Anyways, love those Kruk minor league cards. 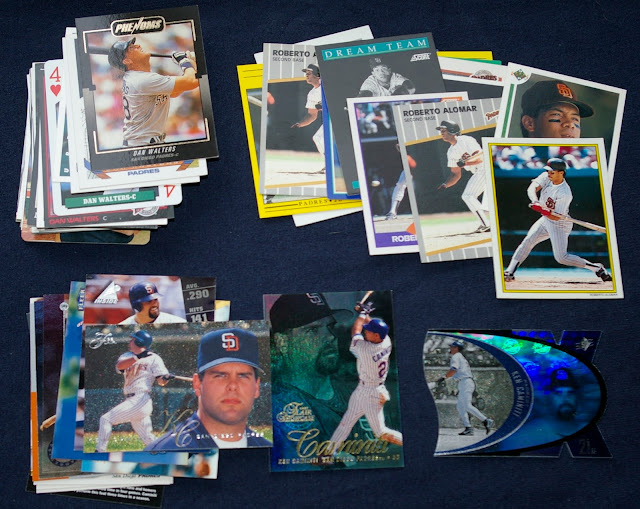 More Padres, now working our way into the 90s. Dan Walters was a backup catcher whose career wasn't anything special, but he was the first guy who ever signed a baseball card for me, so he's got a place in my heart. After his playing days, he became a cop and sadly was paralyzed from a gunshot.
Pretty sure I had most of those Roberto Alomar cards, but probably a couple new ones for me.
And I needed most of those glorious Caminiti cards. 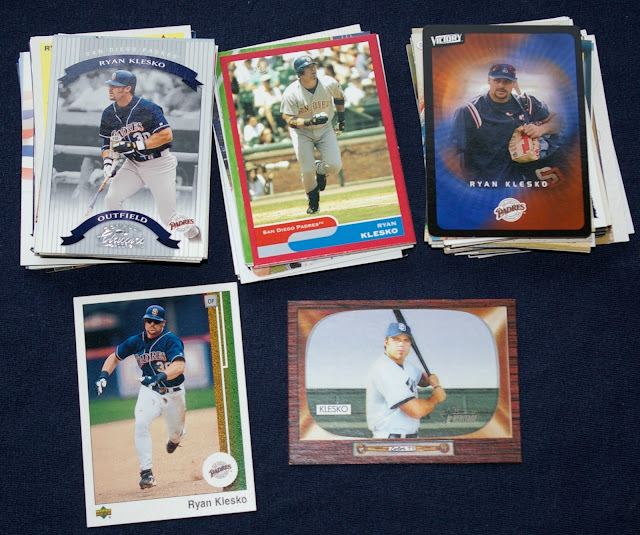 Ryan Klesko was a guy I liked alright when he was in the heart of the San Diego lineup for a few years, though I wasn't collecting at the time. Once I returned to the hobby, he was never really a "PC guy" for me, though I did kinda hang onto his cards when I got them. With this big lot, he's probably knocked into Hundred Card Club territory. Highlights here for me are the Victory card (not often you see a fast food bag on a baseball card) and the retro 89 UD and 55 Bowman designs. 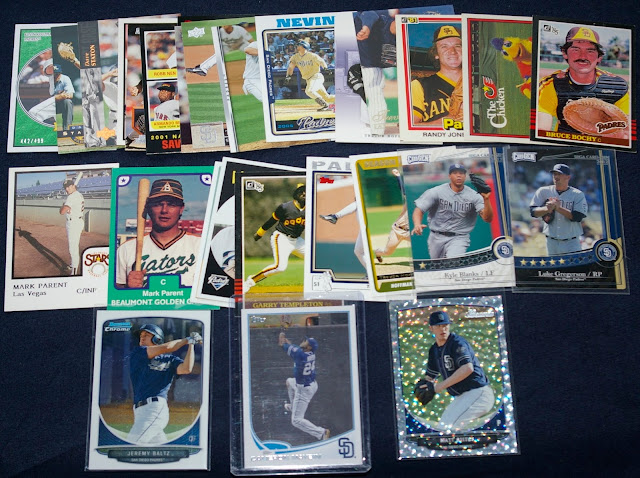 Here are a bunch more various Padres keepers for me. Love minor league cards (like the Mark Parent cards there) from before they became ubiquitous circa 1989. Sega CardGen cards are always cool to get. And that Cameron Maybin at-the-wall shot is a photo variation SP. 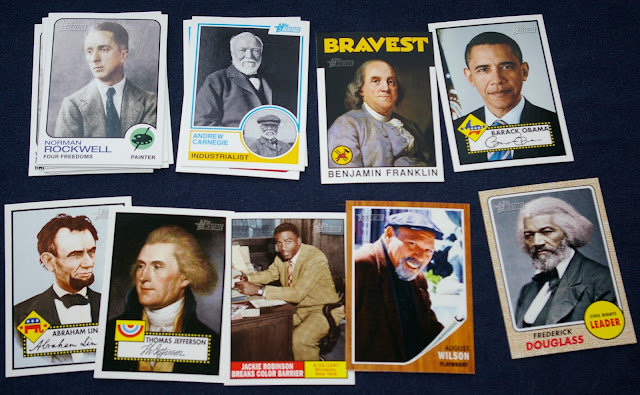 It wasn't all Padres, as Rod included a bunch of these Heritage cards from the 2009 American History set. I had seen these online, but never owned any. Pretty cool. 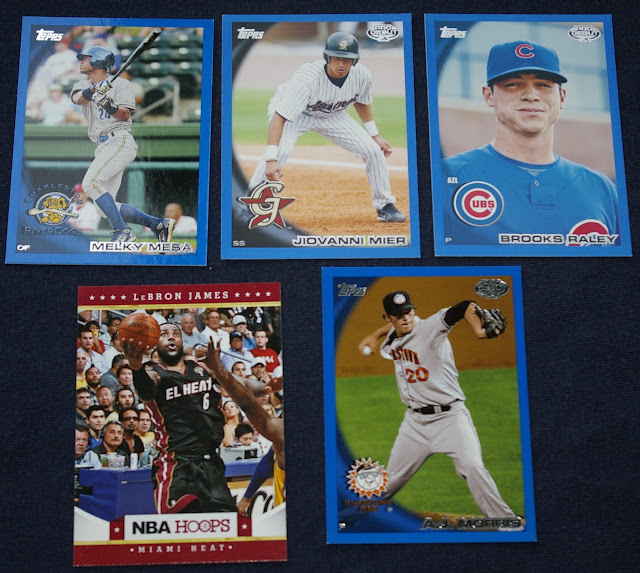 Even a few 2010 Pro Debut numbered parallels and a LeBron!

Thanks so much, Rod! This haul definitely helps me fill several holes in my collection. Much appreciated. And I'm still very much in your debt, so as always, let me know if I can ever help you with anything to return the favor.. Assistance on customs or whatever. I'm at your disposal!
Posted by defgav at 4:53 PM