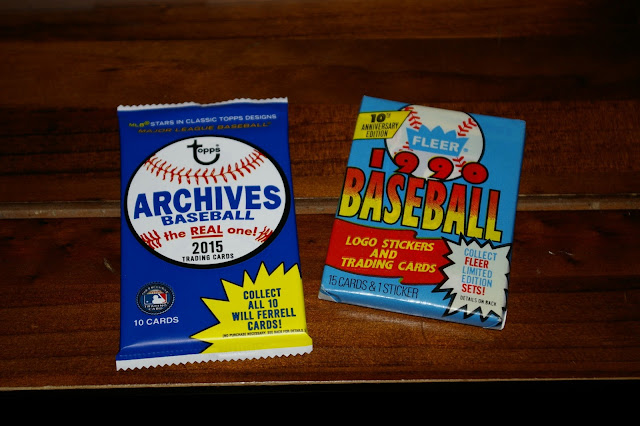 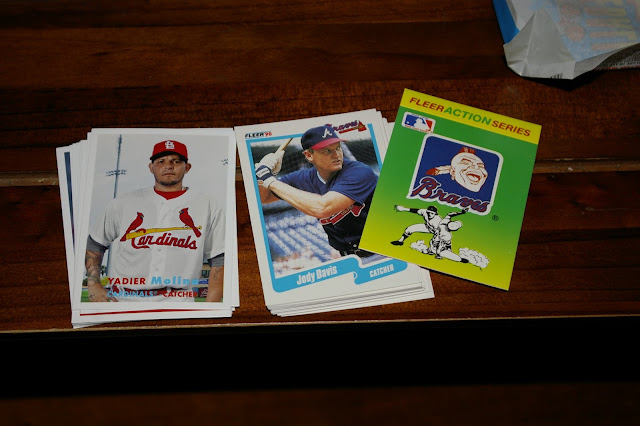 Archives comes out swinging with a star catcher, but Fleer sees your catcher and raises you a matching sticker.
Fleer 1, Archives 0 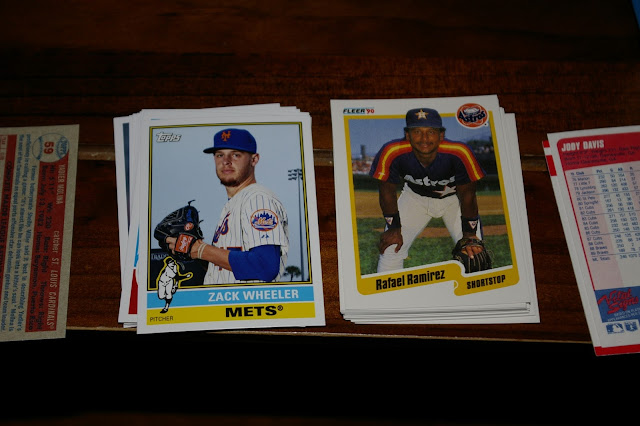 Wheeler is a dealer, but he's no match for the classic Astros uniform with the rainbow shoulders prominently displayed.
Fleer 2, Archives 0 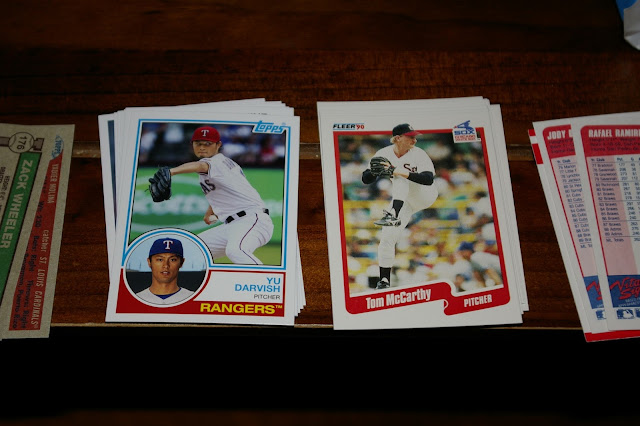 Hey, two foreign-born pitchers! Tom McCarthy was born in Germany. He didn't have much of a major league career, though, so a winner is Yu.
Fleer 2, Archives 1 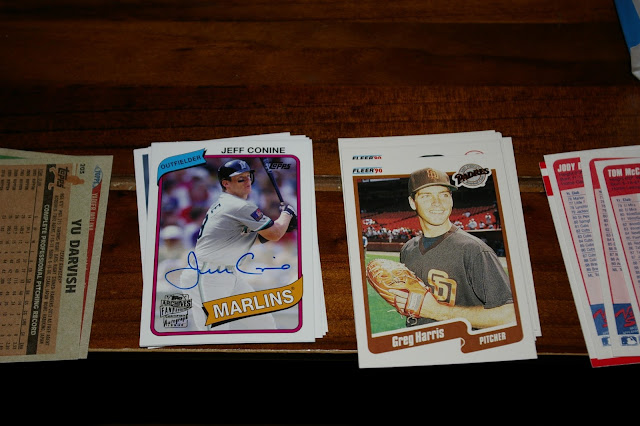 Oh snap! Me pulling a non-promised auto? That's only happened once before. That puts a smile on my face, even if Jeff Conine surely isn't anywhere near the top tier of names you could pull an auto of from this product. But I like him well enough and welcome this card into my collection. Fleer answers strong with a card of my hometown team, but this one is a no-brainer. Archives evens the score.
Archives 2, Fleer 2 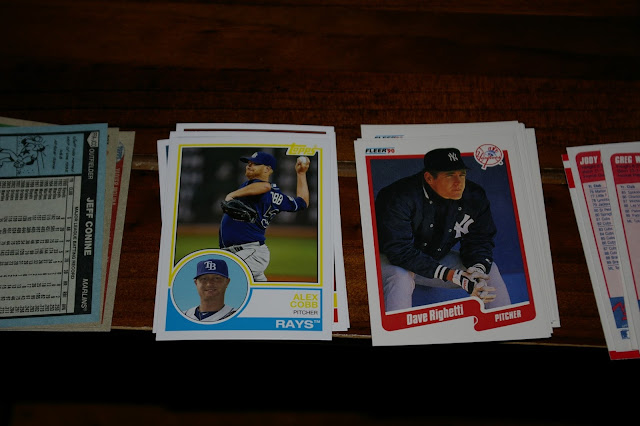 Archives forfeits their turn thanks to nearly unreadable yellow text on a white background. I hope a Topps employee lost their job over this one, became homeless, and eventually died under a bridge a few months later. Hmm, maybe that was a bit harsh. I hope that employee kept his or her job, but learned a valuable lesson about intelligent graphic design. Plus, who's really at fault here, the designer who chose that shade of yellow (looks even worse in person than in the photo), or the manager who okayed the proof? Dave Righetti walks away with the win here.
Fleer 3, Archives 2 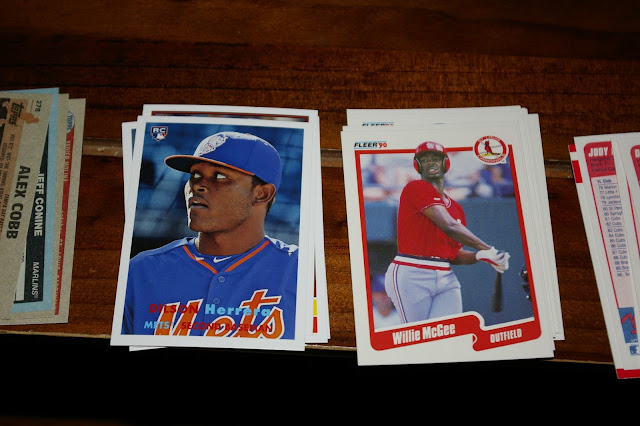 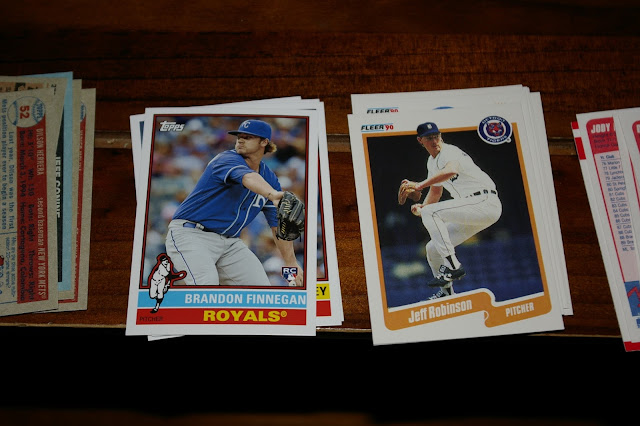 Meh.. Let's give this one to the Finnegan RC.
Fleer 4, Archives 3 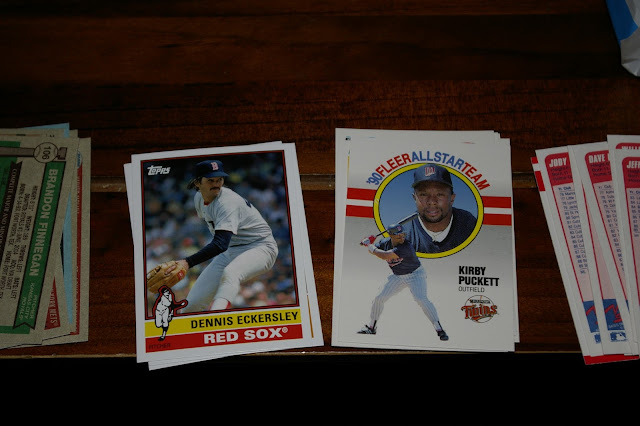 Whoa doggy! Two Hall of Famers facing off.. what are the odds? Eck vs. Kirby.. that's a tough one for me to call. Let's go to the stats. [...] In 24 lifetime plate appearances, Kirby hit only .130 against Eck. Archives gets the point to tie it up.
Archives 4, Fleer 4 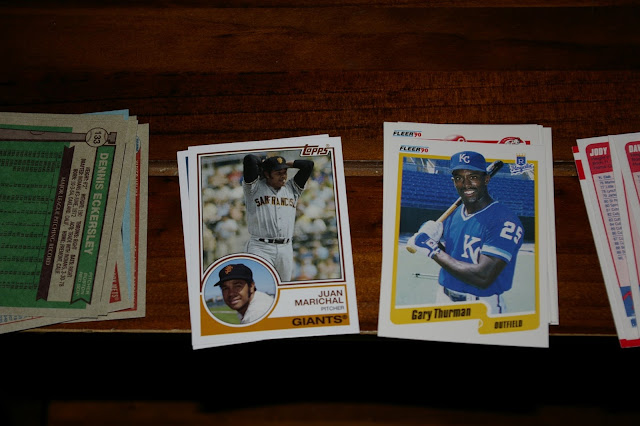 Juan Marichal vs. Arsenio Hall. It's close, but I'll give it to Fleer thanks to Arsenio's charming smile. *waves fist up and around* Woof woof woof!
Fleer 5, Archives 4 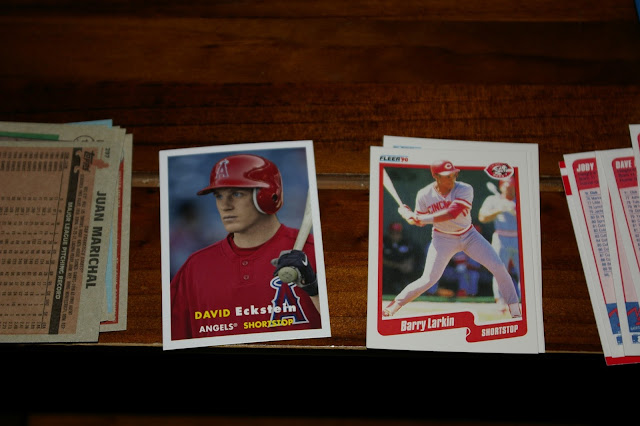 Scrappin' shortstops! I like David Eckstein, but gotta go with Barry Larkin here with his Championship Year card.
Fleer 6, Archives 4 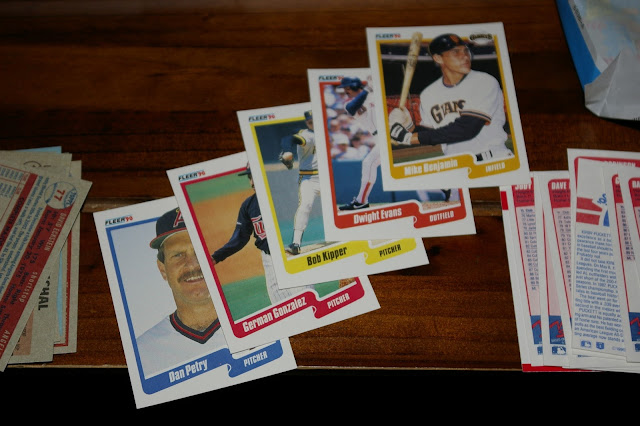 Welp, looks like the Archives pack has run out of cards, while Fleer is still raring to go with 5 more cards. Dwight Evans in a PC guy for me, so that's cool.

So while Archives delivered the biggest hit of the match with the Conine auto, Fleer prevailed overall. 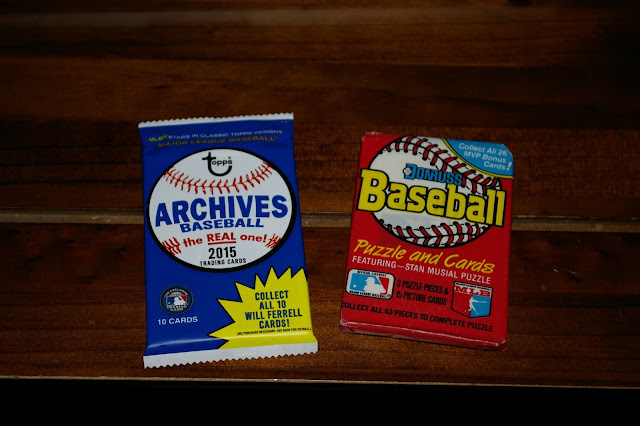 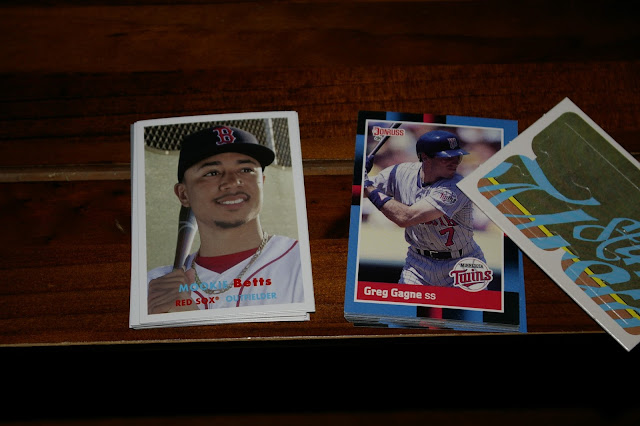 Mookie! The only way Donruss could compete with that would be with Mookie Wilson, thereby forcing a Mookie-off. (Could you IMAGINE?!) Alas, it's just Greg Gagne. And the piece of Stan Musial puzzle is no help. Archives jumps out to an early lead.
Archives 1, Donruss 0 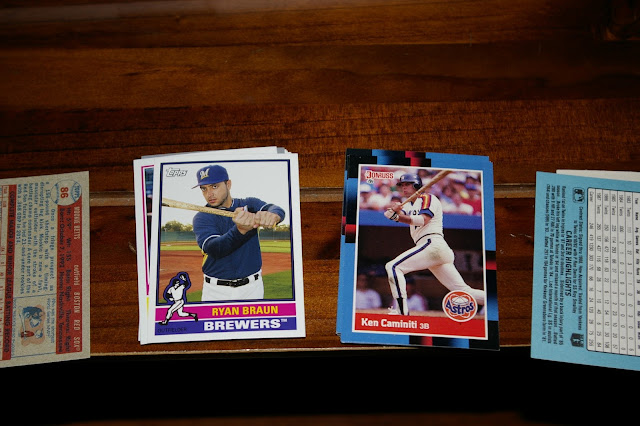 Pack-fresh Caminiti rookie, bitches! I should send that bad-boy in for grading! LOL
Though really, Ryan Braun would lose regardless who '88 Donruss brought to the plate.
Archives 1, Donruss 1 Ron Guidry was 25-3 in 1978, always a fun stat to drop. Nelson Cruz is pretty good, but had some PED trouble. Gonna have to award the point to Guidry.
Donruss 2, Archives 1 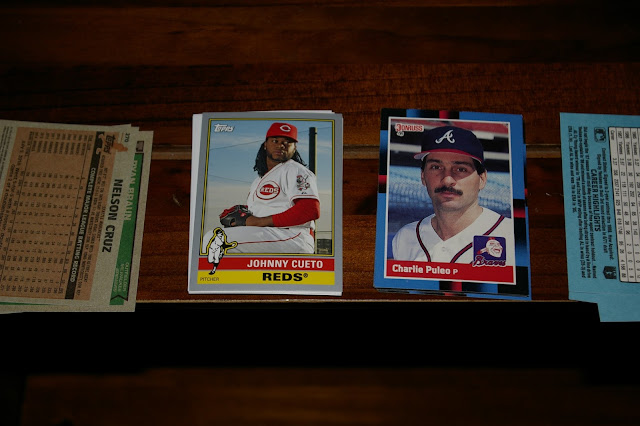 Ooh, a "silver" grey parallel! That's #'d 168/199. Honestly, even if it was a base card, Cueto would easily beat that Braves mop-up guy I've never heard of. (Cue comments about how this guy was brutally murdered by his mom or someshit probably, like yesterday's post.)
Archives 2, Donruss 2 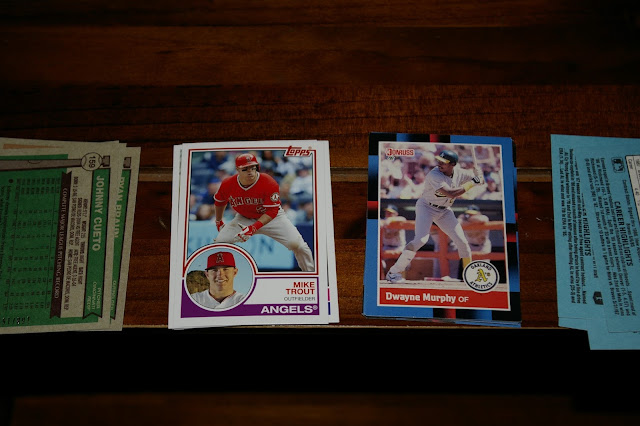 Sorry, Dwayne, there's not a card in 1988 Donruss that can beat Mike Trout. Archives takes the lead.
Archives 3, Donruss 2 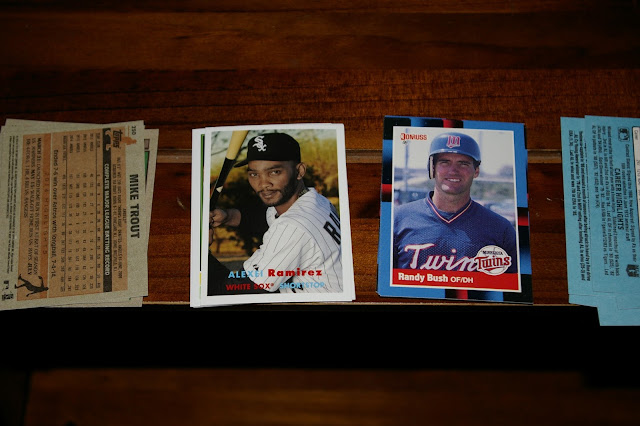 Ha, there's a bush in the background of the Archives card, and a Bush in the foreground of the Donruss card. This one might be too close to call. Wait, I'm being told a recount in Florida narrowly gave the victory to Bush. *shudder*
Archives 3, Donruss 3 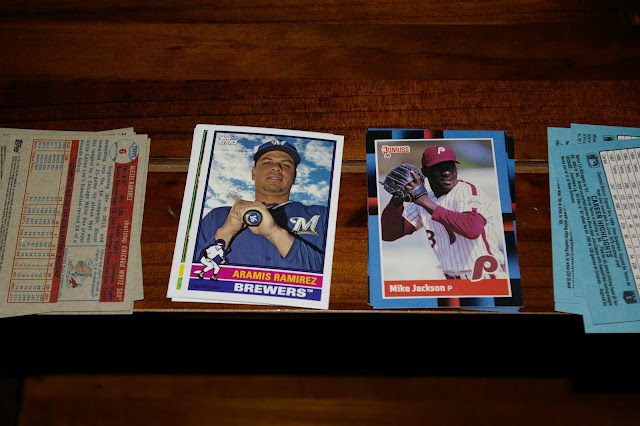 The clouds behind Aramis are cool, but [I can't think of a clever Michael Jackson reference to make]. Donruss moonwalks back into the lead.
Donruss 4, Archives 3 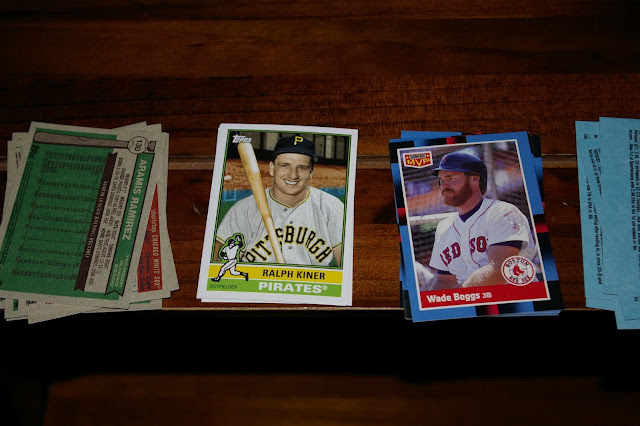 How eerie, another HOF matchup! I swear I'm taking these cards in natural order, not tinkering. I love Ralph Kiner, but after my epic TTM return from the Chicken Man, I could never vote against Wade Boggs.
Donruss 5, Archives 3 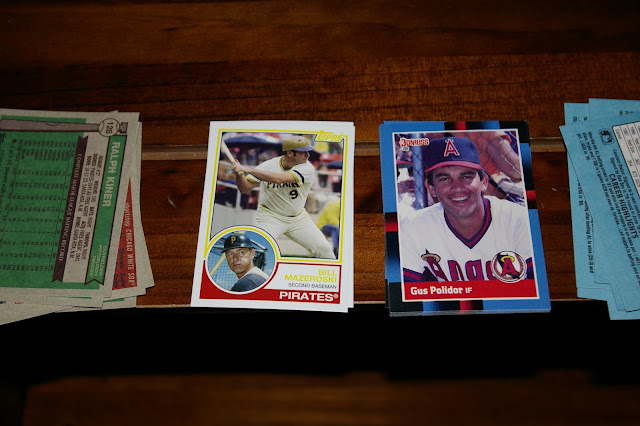 I'm guessing that's Maz based on the chaw, but who knows thanks to the invisible ink Archives used. That's gonna cost them. Donruss answers with a happy infielder I've never heard of. You don't see many cards that look like that anymore.
Donruss 6, Archives 3 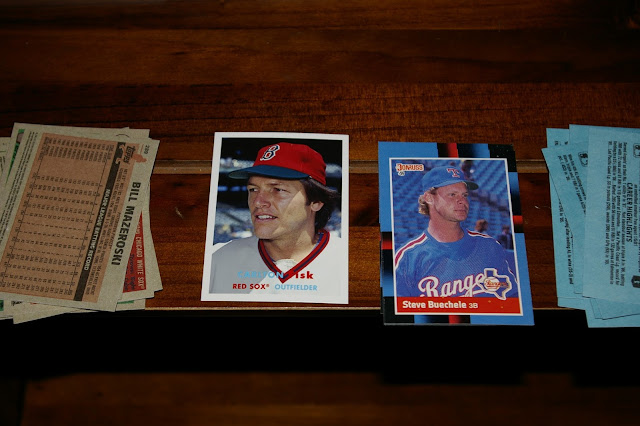 The crowd is booing! Oh wait, they're not booing, they're saying "Boo shell!"
Archives summons its last bit of strength with a Fisk that begs the question, "Is that the best photo Topps could come up with?" Still, Pudge easily bests Buechele.
Donruss 6, Archives 4 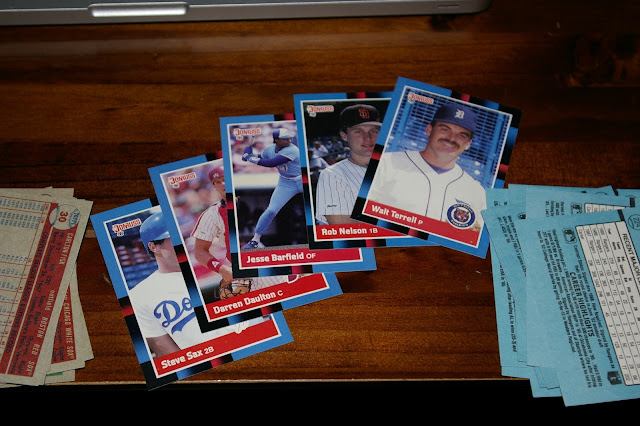 Archives is spent, but Donruss is still dealing. It's all over! 1988 Donruss wins!

There you have it. According to the final line score, I should have saved 98% of my money by buying junk wax instead of the discounted Archives blaster I grabbed at the grocery store last weekend. I had already opened the rest of the packs, and the blaster was a dud prior to these last two. I forgot what a one-trick-pony 2015 Archives was, with really the only draw being the Will Ferrell cards, which were seeded 1 per blaster, 2 per hobby box, and 1 autograph per bazillion cases. FYI, I pulled the Dodgers Ferrell card from this blaster, available for trade if anyone needs it. The SPs and any decent inserts are ridiculously tough pulls in this stupid product. I really hope the 2016 version is better when it comes to this stuff, because the Bull Durham cards aren't gonna be enough to carry it. But yeah, I pulled no SPs, of course, and my only other insert was a dumb Abraham Lincoln card that has no business being in Archives. The Conine auto and #'d Cueto parallel helped salvage the box from being a stinker.

Thanks for reading! What did you think of the new Pack Skirmish segment? ("skirmish" sounds funner than "war".) I might do a couple more of these. You may have noticed I was lazy and didn't bother cropping the photos at all, so apologies to those of you with slow internet connections.
Posted by defgav at 3:02 PM