It was way back in November 2014 when I first opined, "I'd love to put together a parallel frankenset someday of 2011 Topps that's a combination of the diamond and cognac and/or xfractors and/or whatever other parallels that set had."

Well, it took nearly two years, but I've finally taken this flight of fancy into an official collecting goal and created a checklist spreadsheet.

This monster of a 2011 Topps frankenset will consist of Series 1, Series 2, Update (including the Legend Variations from those 3 sets), plus Chrome, making for a whopping 1284 cards. Yikes. While ideally this would be a shiny frankenset, using only sparkly / refractory parallels, I'm making it a bit easier on myself (and trader buddies) by opening it up to all parallels.. so stuff like the gold #/2011 parallels and black background Walmart parallels are welcomed. It might even be fun to add a printing plate or two into the mix. Anything besides base cards. 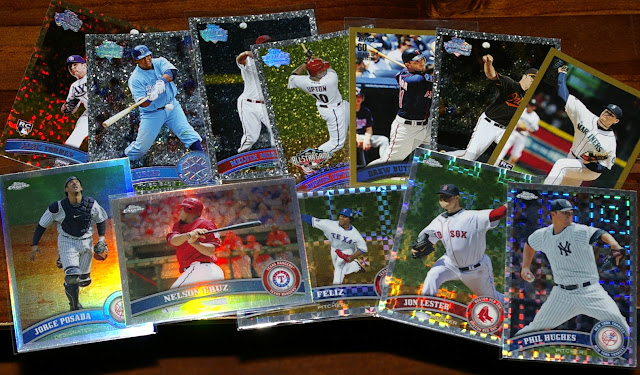 Thanks to traders and dimebox pickups, I've amassed a pretty big stack of qualifying cards to get started with. Looks like I'm at 13.24% of the way to my goal, with 170 of 1284 cards. So yep, still a long way to go. But no rush. This is definitely a passive, long-term collecting goal. I'd love to get sent needs in trades, but I'm not going to spend much time/money hunting them down. At least not until I get to spitting distance of completion.

It goes without saying, but if you've got any 2011 Topps parallels available and want to trade, check out my list and get in touch.. thanks!
Posted by defgav at 3:32 PM