Back in the news due to his retirement ceremonious release from the Yankees, Alex Rodriguez is a polarizing figure in baseball, that's for sure. I hated him for most of his career, but after he eventually accepted that year-long suspension, I started to root for him to come back strong. I guess it's human nature to build up our brash heroes, knock them down, then build back them up again.

Even without cheating, you gotta figure he'd still be one of the greats. Check out where he ranks on the all-time lists as of the other day:

(I kinda hope he latches on with the Marlins or somebody to pinch hit those 4 more home runs. They should also sign Fred McGriff and Al Kaline while they're at it.)

I never really collected his cards at all, but then a year or two ago, I bought an entire big nickelbox at a card show. Among its contents happened to be dozens of Arod cards, so I figured I'd start up a little PC of the guy and see if I could push him over the top and into my Hundred Card Club without too much effort. I broke down and actually spent decent money on an Arod card a couple weeks ago...

As I mentioned yesterday, it's hard for me to feel satisfied about my player collections unless I've got at least one auto to crown the lot. And so I settled on grabbing this one. The signature is a bit faded, but hey, it's an apt metaphor for Alex's career: Big and extravagant, but the glory since diminished over the years. I'll just pretend is a rare "gray ink" parallel or something, haha. Maybe another Arod auto will fall into my lap someday, usurping the "best card of the PC" crown, but for now, I'm fully content with this one. 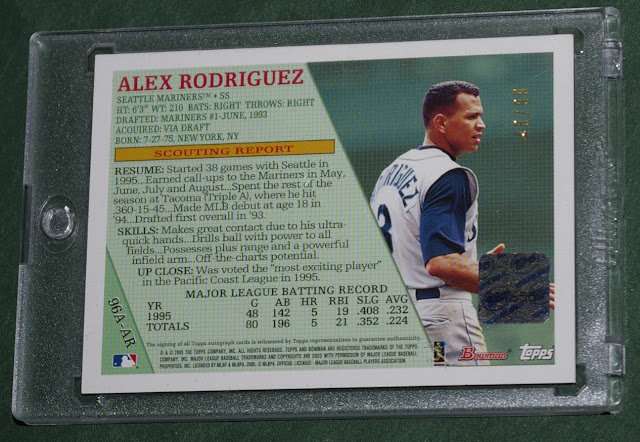 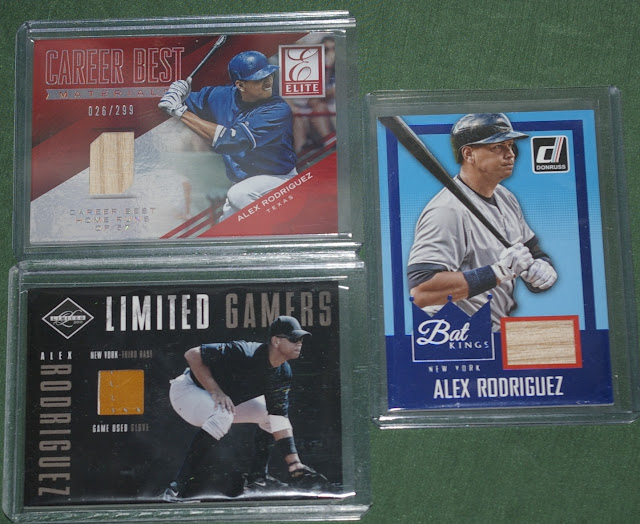 A few other hits: 2 bat chips and a piece of fielding glove.

I'm not going to go through the trouble of sorting all the cards by year like I sometimes do when I post my player collections (it's not like this post is gonna get any views anyways.. everybody hates the guy!), but instead I'll group them by team era.

By my count, that's well over a hundred cards (I think about 120), so yep, mission accomplished.

Congrats on the impressive numbers, Mr. Rodriguez, and best of luck in the future, whatever it holds.