A friend of ours has season tickets to the Portland Pickles, and kindly gave us his tickets for a game last weekend. (Shout-out to DJ Short Change.. Thanks, man!) We previously caught a game a month before and had a fun time, so we were happy to go back for more, especially with comped tix. And whereas last time we were sitting out on the lawn, this time we got a much better view, right up front. Easily the best vantage point I've watched a pro ballgame from. There were a couple plays at the plate, and it was awesome to see the runner chugging home, racing the throw. 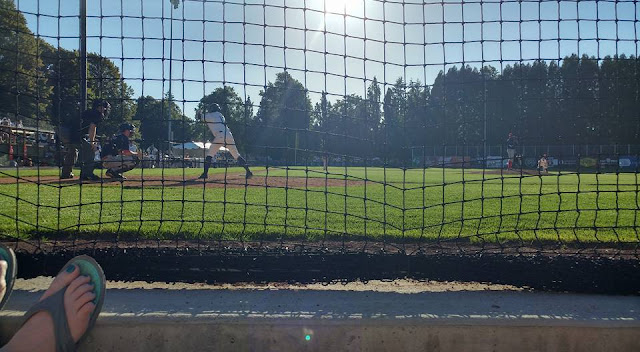 The only downside is it was pretty darn hot in the sun. But with some sunblock and booze, we were doing ok. It started out rough for the Pickles with the Chico Heat's starter pitching a gem. But the bats eventually woke up and the home team ended up pulling off an exciting win.

As with last time, we didn't show up early enough or stay late enough-- we caught the entire game, but after baking in the sun for that long, we just wanted to hop the Max train back home-- to get any player autographs, though I didn't walk away empty handed... 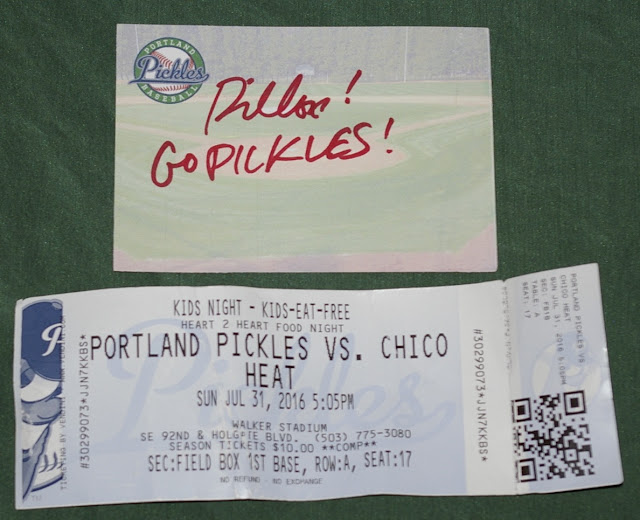 Dillon The Pickle the mascot signed a card for me! Nicest pickle I've ever met! 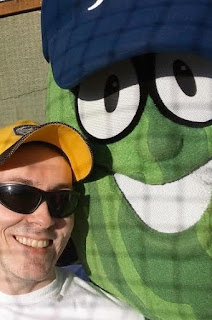 Got a quick pic with him too. If I was super hot, I can only imagine how sweltering it must be in that suit! Poor guy. Well, if he was suffering, you couldn't tell. Class act all the way.

But anyways, yeah, that was a lot of fun.
Then I got real sick that night and slept a few hours on the bathroom floor. Man, it was rough.


Now let's recap some trade packages I've gotten in the past week or two.

First up is Tony L. He's always happy to take my Brewers and sent me back some nice cards. His post showing the other side of our latest deal is a great one. Well, I liked it a lot, at least! 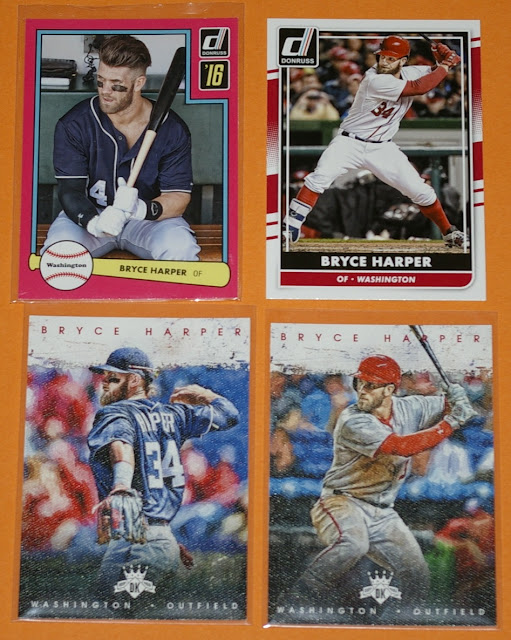 My Bryce Harper PC got a boost of the Panini variety. 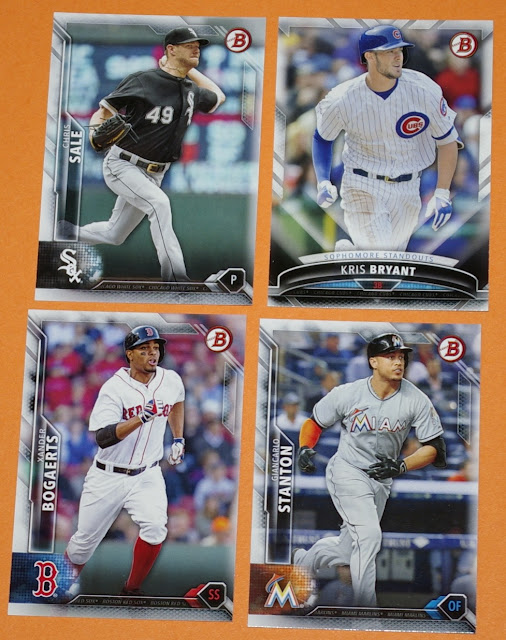 With all the Cubs and Red Sox collectors on the cardsphere, it's extra special when I'm graced with hot players from those teams in trades. 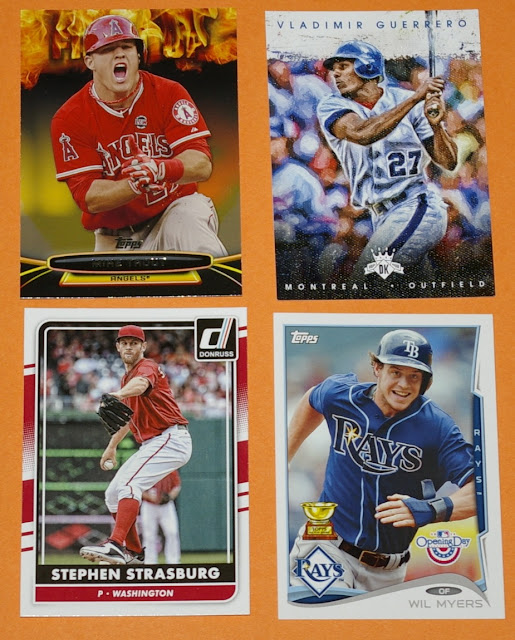 Big thanks, Tony! Always a pleasure.

Moving now from an old trading partner of mine to a brand new one, here's a package from Dayton. He's a new guy on the scene, and recently started the blog Retro Cub.. yep, another Cubs collector! We hammered out a little initial trade and he sent me some appreciated cards.

Some sweet McCutchens for the PC. Bummer he's having a down year, but hopefully he bounces back next season if not earlier. 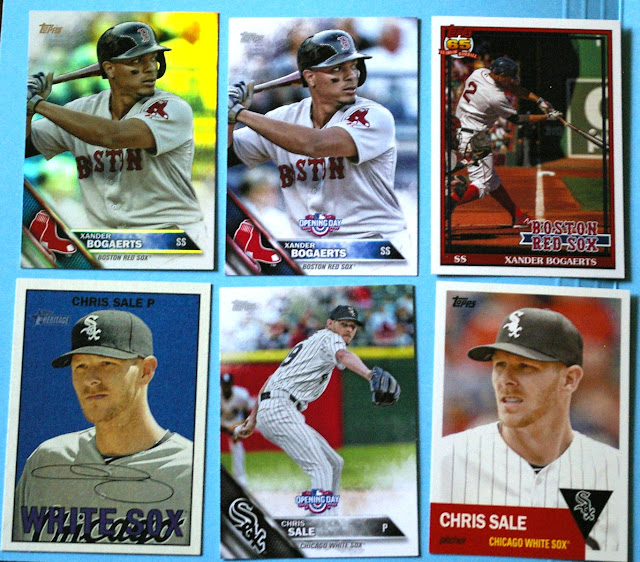 Xanders and Sales, with the pretty rainbow foil likely being the highlight here. 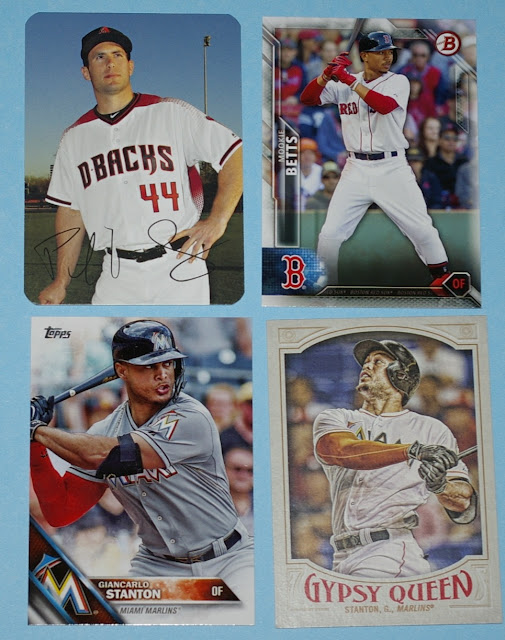 More dudes I collect. Thanks, Dayton! Hope you like the cards I sent, and we'll have to trade again one of these days!

Now it's a package from John Hazen. He doesn't have a blog, but he's been around for a while, occasionally commenting and whatnot. Checking my old email, turns out we had traded once back in spring of 2014, so I suppose we were due for a follow-up swap! He had eyes on the off-condition '71 Brooks and '73 Reggie I brought home as trade bait from my latest card show haul. I threw in a few bonus customs for him I thought he might get a kick out of. Since he doesn't have a blog, I'll quote him here. "Thanks for trade and the extras!" No problem, John! 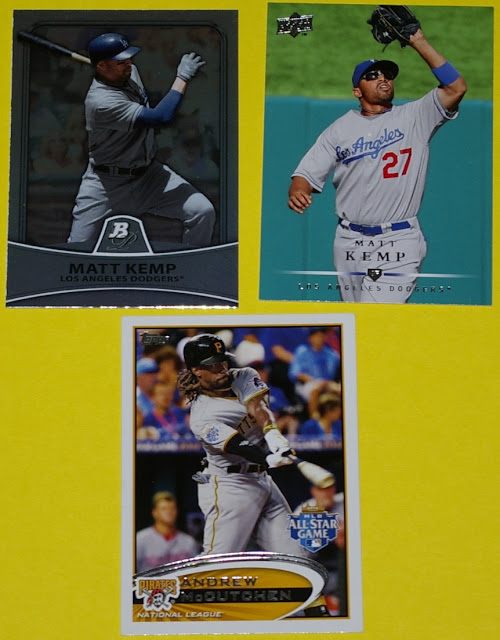 Kemps and a Cutch. 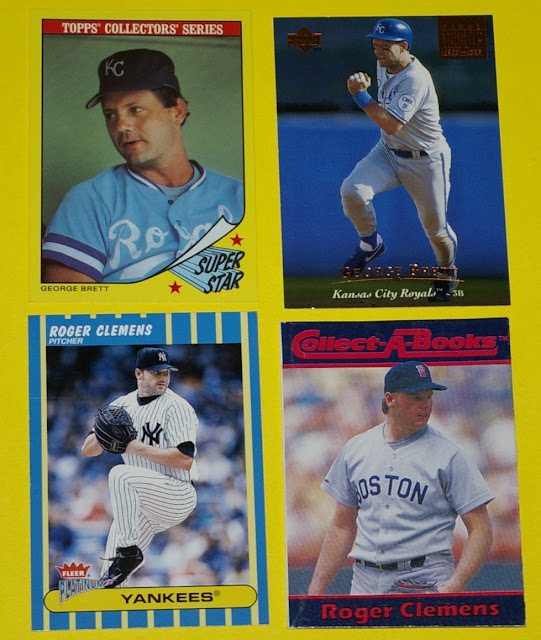 Brett & the Rocket. That yellow Super Star really blends into the background. No, it's not a die-cut.. lol. (I do the backgrounds different colors in trade roundups to help me keep straight which cards are from whom.) 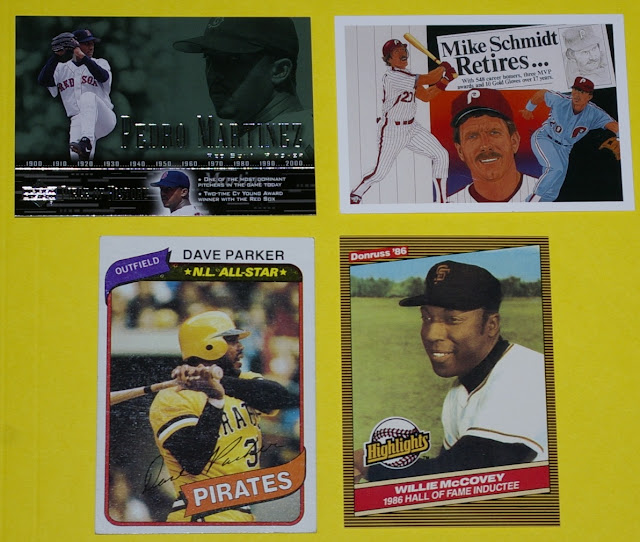 Some more dudes I collect. Thanks again, John!

Finally for today, Bo from Baseball Cards Come to Life! sent me some cool cards. 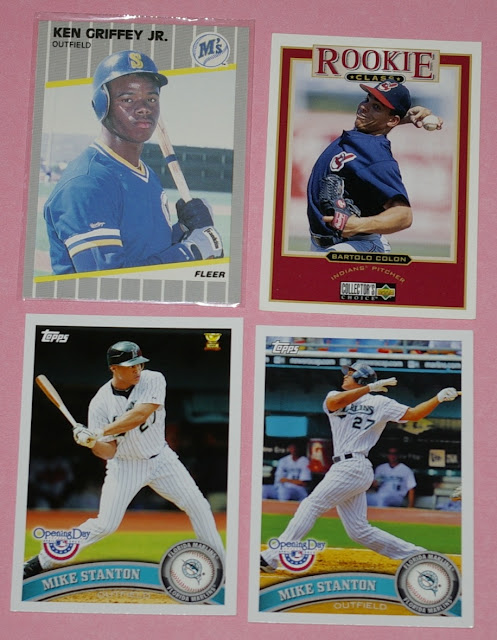 Griffey Fleer RC! That was the last one I was missing of his mainstream rookie cards. Nice to "complete the set" as it were.
I'm happy for them, but gotta say I'm confused about the 2 different 2011 Opening Day cards of Mike Stanton. One is card #38 and the other #65. Did they really do a separate "rookie cup" card? 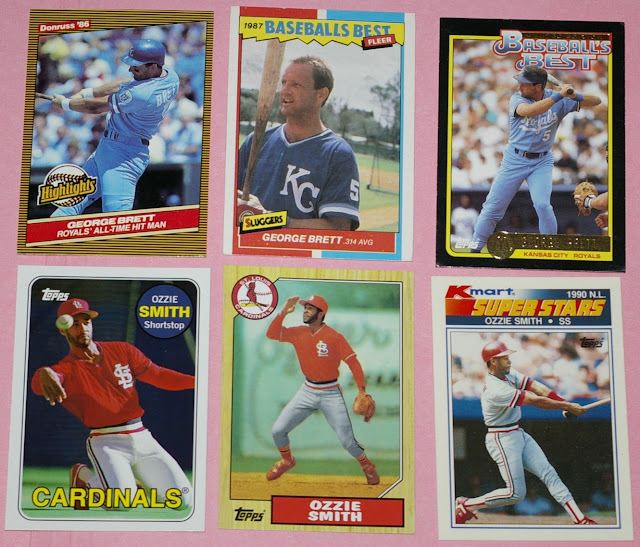 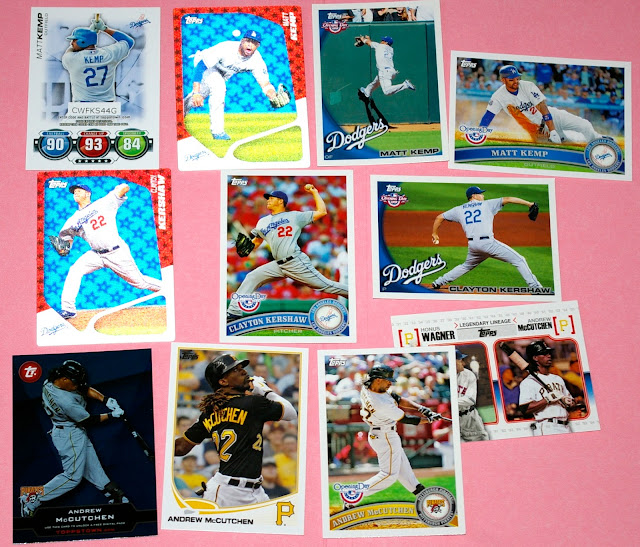 More Kemps, Kershaws, and Cutches. I just recently posted my Kemp PC, but between the cards from these trades and the few I've found while doing a long-overdue sort, I'm sure I've passed my 100 card goal, officially knocking him off my wantlist. Welcome to the Hundred Card Club, Kemp! 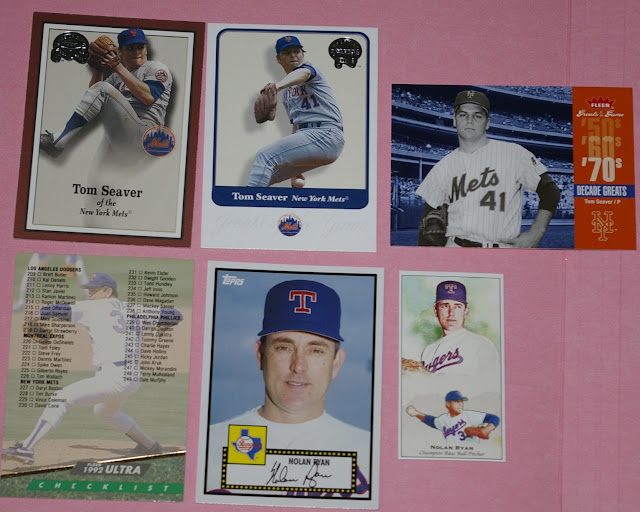 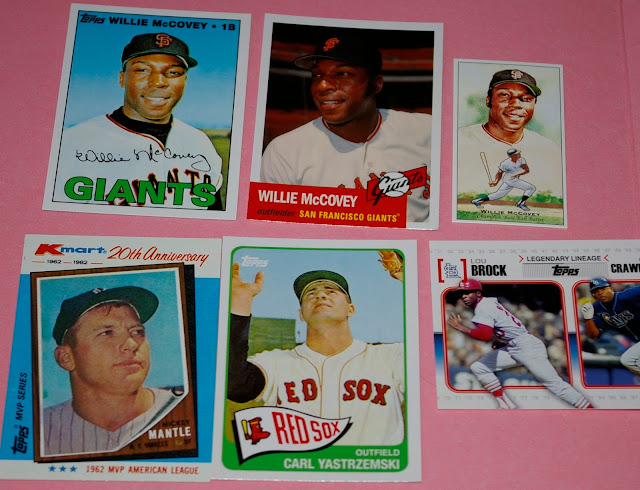 McCovey and some other old-timers. 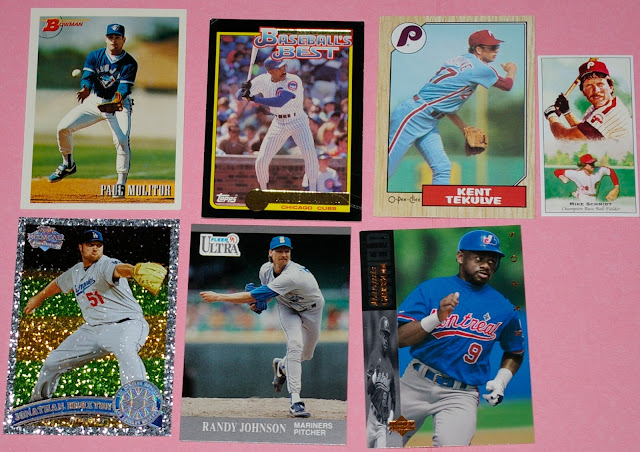 Some more dudes I collect, plus a card for my 2011 Topps parallel frankenset. Love the Teke OPC!

Big thanks, Bo! I just dumped a bunch of cards your way today using some found postage (fingers crossed). A lot of them I was just looking to get rid of, ain't gonna lie, but I think you'll be able to whittle them down to some cards you're happy to get! Throw away any you don't want.. again, the postage was free so whatever.


Thanks again to Tony, Dayton, John, and Bo for the cards.. and Change for the tickets.. and the dude in the pickle suit for the autograph. And to you for reading! See you next time.
Posted by defgav at 7:35 PM