Shaking up the wantlist a little

I started my Hundred Card Club idea a year or two ago to help give me some focus with my collection. I like collecting a lot of different players, but it's a bit overwhelming to go after cards of a bunch of guys forever, never getting any closure. So now if I decide to collect a guy, my goal is to acquire 100 cards of him, then I'm off the hook and don't "have to" keep on going after his cards. A hundred different cards will generally give you a nice overview of a player's career. When financially possible, I try to make sure each "completed" PC contains at least one autograph, relic card, and rookie.

A couple favorite active players for me to collect over the past couple years have been Paul Goldschmidt and Giancarlo Stanton. It's been a fun ride, but these two sluggers have now officially been knocked off my wantlist and into the Hundred Card Club. While I'm sure I'll continue to add to these PCs from time to time, they are no longer priorities for me. You trader buddies of mine can feel free to keep on sending me their cards, though, especially hits and other less-common cards.

Other active (for now) guys who've similarly joined the HCC and been removed from my wantlist in the recent past include Adrian Gonzalez, Jake Peavy, Alex Rodriguez, David Ortiz, and Matt Kemp.
Big thanks to you generous traders who've help me reach the magic number with all these guys.

Among dudes I've kinda stopped collecting prematurely are Andrew Cashner and James Shields.. a couple former Padre pitchers who've seen their careers take downturns and get traded out of San Diego. I just ain't feeling these guys anymore, so they got deleted from the wantlist too.


I've started up new PCs for a few guys to fill the void. Names I'll now be sorting out into my player collection boxes include Josh Donaldson, Manny Machado, Adrian Beltre, and Billy Hamilton. 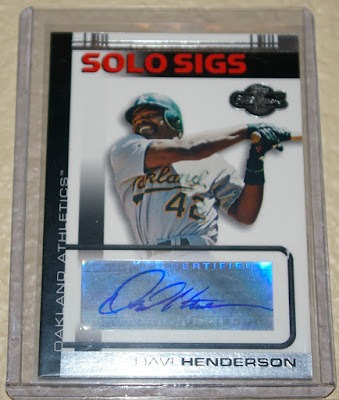 Some new retired guys have been added to my wantlist, too. I already got Rickey Henderson in the HCC, but now I'm turning my attention on a lesser-celebrated Henderson: Dave. I collected him a bit when I was a kid, but up to this point, haven't restarted since rejoining the hobby. He always seemed to be having a good time, with his infectious smile gracing several of his baseball cards. Sadly, he was taken from us too soon, passing last December at age 57. He doesn't have much available out there as far as certified auto cards, but I was able to score this 2007 Topps Co-Signers stickergraph for just $5 shipped. I think the only card of his I kept from my childhood collection is his 1982 Topps RC that I pulled from a pack circa 1991. Other than that, I have very few of his cards, so you guys with big overproduction-era stockpiles, feel free to dump your spare Dave Henderson cards on me.

As always, my updated wantlist can be found here and linked on the right sidebar. It's nearing 3000 hits (Eat your heart out, Ichiro! lol) Check it out and feel free to get in touch about a possible trade if you like. Thanks!
Posted by defgav at 9:03 AM