Served up my first piece of Trout

Been a slow couple weeks for trades, but maybe I'll pick up some enticing tradebait at the card show this weekend. The one trade package I've received recently was a good one, though. Andy over at the new blog Ain't Nobody Got Time For Cardboard! won a prize in a contest of mine a while back, but this was our first time trading. He was mainly interested in having some custom cards created for his li'l tyke who's just begun his amateur baseball career. Here's what I scored in return..

A pair of Trout hits! I've got a decent little Mike Trout PC going (highlighted by an auto), but this is my first relic of baseball's best player. The card on the right claims to be a commemorative pin, though I'm not sure that description would hold up in court. It's cool, though. Calls back to the 2010 All-Star Futures Game, though the card is actually from 2016 Topps Series 2. 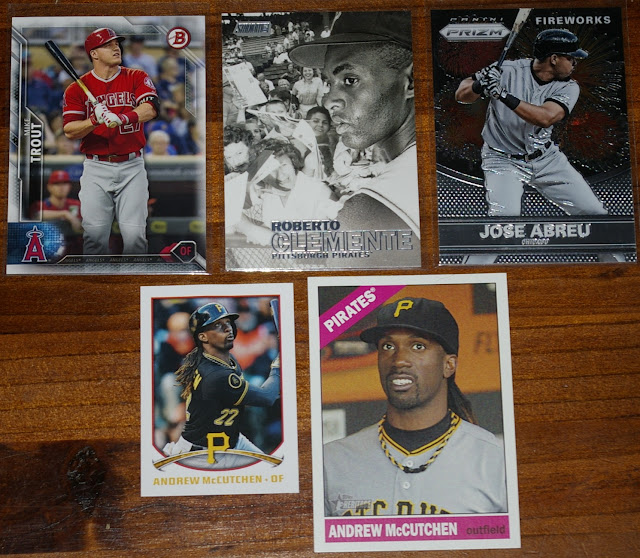 For a change of pace, here's a Mike Trout card without anything embedded in it. Also nice cards of Roberto Clemente, Jose Abreu, and Andrew McCutchen.

And we close out with this colorful trio. The Strasburg purple is #'d 161/250. The Chris Sale DK is my first 2016 Donruss Optic card, which if you're not familiar is a new Panini offering which is basically Donruss Chrome. The breaks I've seen on the cardsphere have been intriguing and I'm tempted to bust some of that.

Great stuff! Big thanks, Andy. Hope you're equally happy with the cards I sent.


Have a great weekend, everybody.
Posted by defgav at 3:12 PM