a beat-up Joe Morgan RC for my 65 Topps set 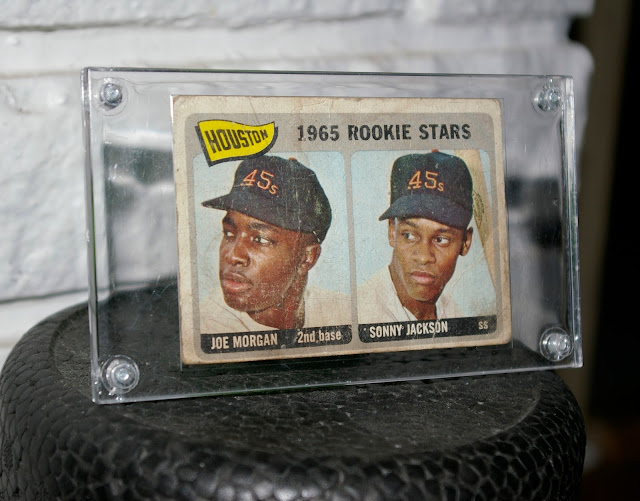 Snagged a big card for my 1965 Topps setbuild with this Joe Morgan / Sonny Jackson RC for a few bucks on eBay. I almost chased a better condition specimen for a little more money, but this well-loved beauty kept calling to me. The fact that it came in a thick screw-down case was enticing to me as well, with trying to keep the card mint definitely a lost cause at this point, so it's kinda funny, but looks impressive.

I love vintage cards, but at this point with counterfeiting being what it is, you either gotta go graded or off-condition, and the budget minded option is obviously the later. Not that a counterfeiter couldn't fake something close to this if they really wanted (I've made my share of "artificially aged" customs, you may recall), but to really pull it off convincingly would not be worth anyone's effort for the minor payday unless we're talking about a very high dollar card. 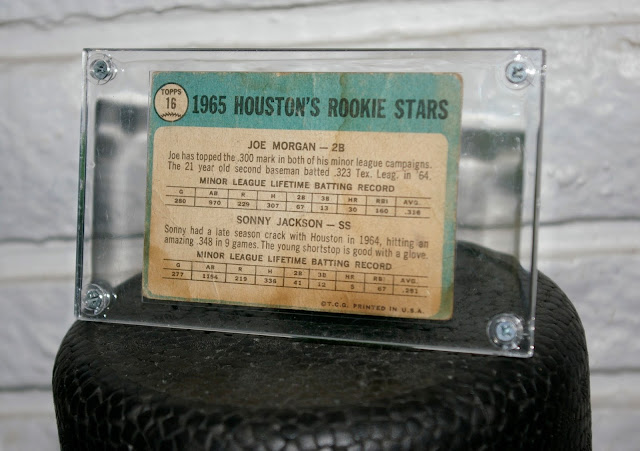 So I think I'm at peace with relaxing condition standards for my vintage setbuilds. As I intend it to be a lifelong hobby for me, I won't rule out upgrading someday down the line. But for the moment, I welcome cards with character such as this into my collection.

Joe Morgan is one of the few Hall of Famers from that era I don't really have a designated PC going for. Hey, can't collect everybody, right? But I admire his career, and while he said dumb stuff occasionally, I really enjoyed listening to him and Jon Miller broadcast games on ESPN's Sunday Night Baseball for years.

At 3/5 complete, I think I might make working on the '65 set more of a priority (i.e. allotting funds to make progress). It's fun, and my enthusiasm for modern cards has been waning a bit lately. This card is another HOFer checked off the list, joining Mantle and Clemente as big names I've got. Some A-listers I'm needing include Mays, Aaron, Banks, Koufax, plus RCs of Steve Carlton and Phil Niekro.. so I've got some work to do.

I haven't been in a very bloggy mood the past few days, but I've got some incoming trades and stuff to post about soon. Thanks for stopping by.
Posted by defgav at 12:57 PM