An incredible mega lot of cards from Rod

It's time! I finally sorted out the tons of cards that Padrographs Rod gave me the Sunday before Christmas. It's really been the gift that keeps on giving. He's been been narrowing down his collection lately and I've been lucky enough to be on the receiving end of many cards he's been shedding. Per the downsizing, he doesn't even want any cards in return from me, though at least I can help return the favor here and there by helping out with photoshop work for his various projects.

I thought about breaking this up into a few posts, but I think I'm just going to do this one jumbo-sized post.
Ready? Let's do it! 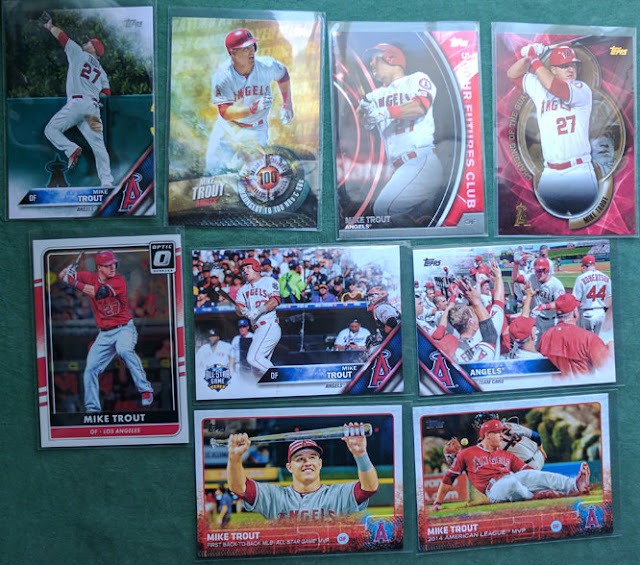 Kicking off with the game's best, Mike Trout. Great selection of cards from the past couple years here. 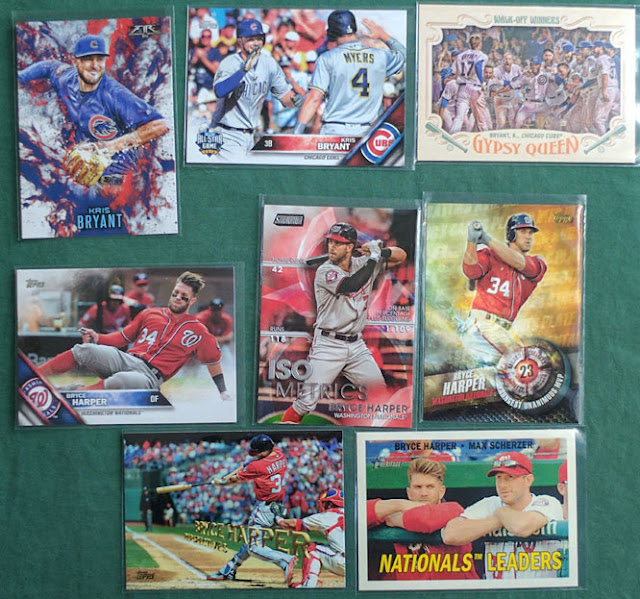 The Bry Guys.. A couple of the other biggest stars of today, Kris Bryant and Bryce Harper. 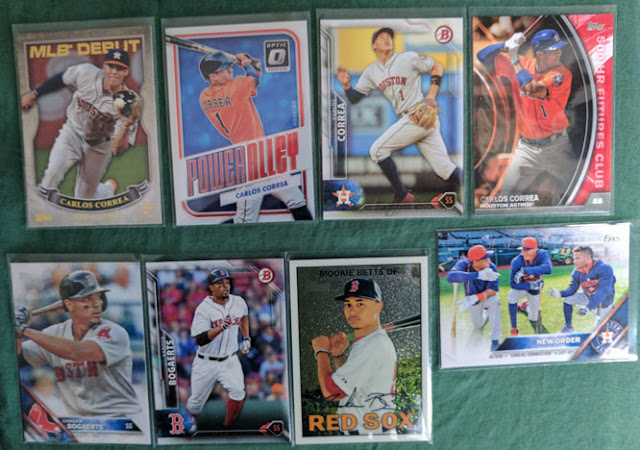 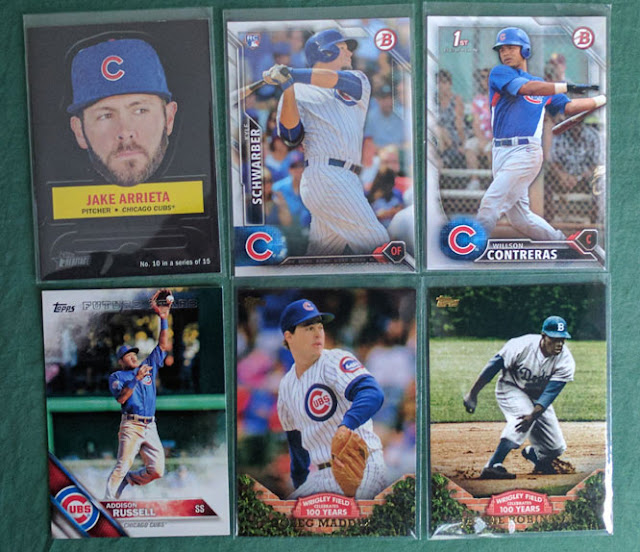 Some good Cub cards. Great photo on that Jackie. 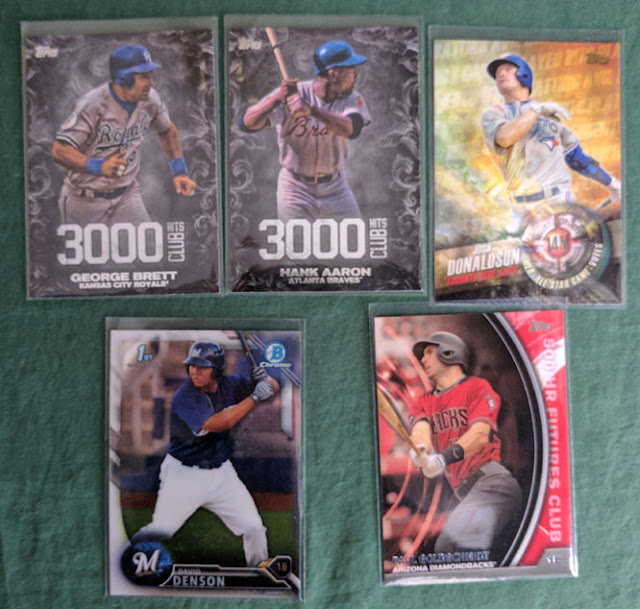 Some more decent Topps inserts from this past year, plus a new David Denson for my Pride PC. 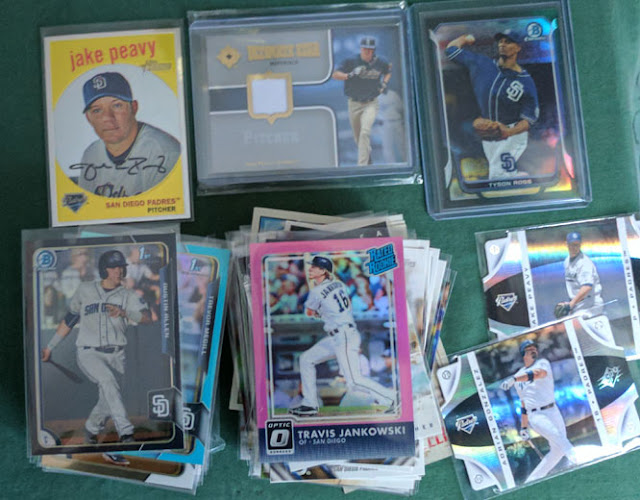 With Rod being a Padres fan, it's no surprise that there was a heavy dose of San Diego cardboard included. Well, hey, I'm a Padres fan too! So that works out nicely. Some highlights here are Jake Peavy with a numbered Heritage parallel and a jersey relic. There's talk of him returning to San Diego as a free agent, and while he probably doesn't have much left in the tank, I'm sentimental enough to hope we sign him. The Tyson Ross refractor in the corner is the lowest numbered card in the lot at /35. He just signed with the Rangers.. I wish him the best of luck getting his career back on track in Texas.. and not just because I've got a bunch of pretty good T. Ross cards. 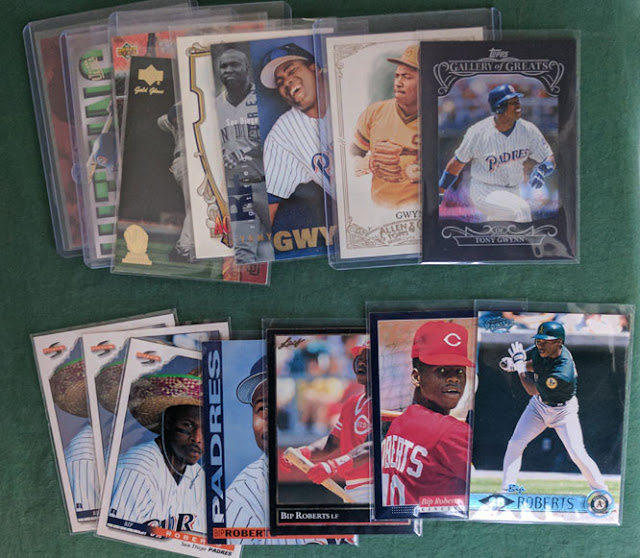 And of course, lots of Gwynns and Bips. Not many cards of Bip with the A's out there. Very cool. 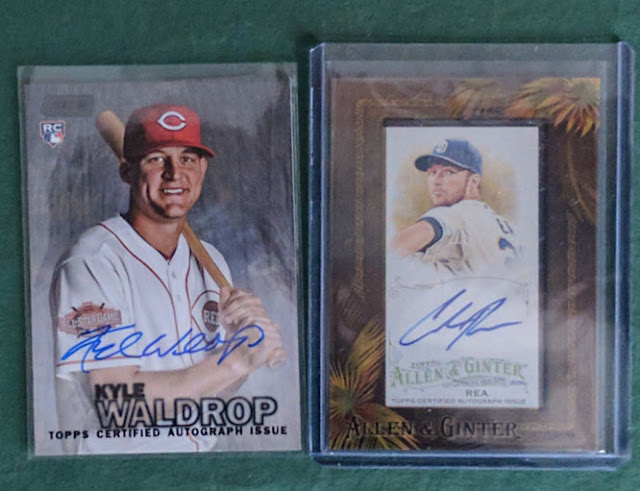 Hits! The Waldrop is available if any Reds fans are interested in trading. Colin Rea is a guy I like a lot, even though he'll be shelved for a long while, so that Ginter mini auto is one of my favorites of this entire lot. 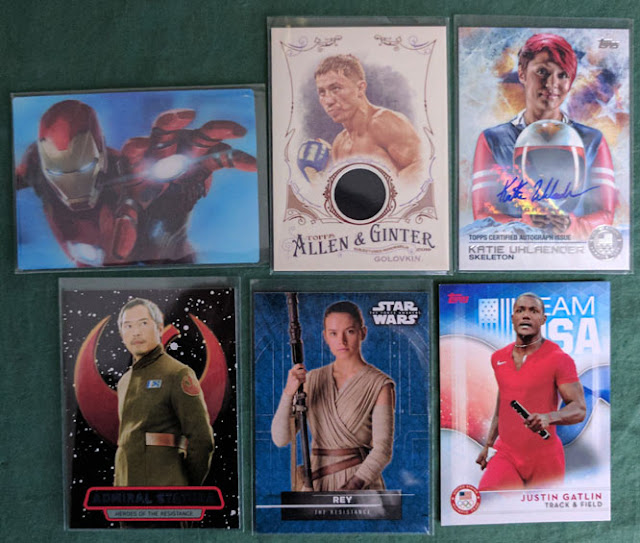 Let's take a break from baseball for a moment. Cool 3D Iron Man sticker. Relic of Gennady Golovkin.. I don't really follow boxing, but seems he's pretty good ("As of January 2017, he is ranked as the world's number one middleweight by BoxRec," according to his wiki). And check out the auto of Olympian Katie Uhlaender. Pretty sweet. Also a couple nice Star Wars cards and an addition to my new sprinter minicollection, inspired by Tony Burb's runner minicollection. 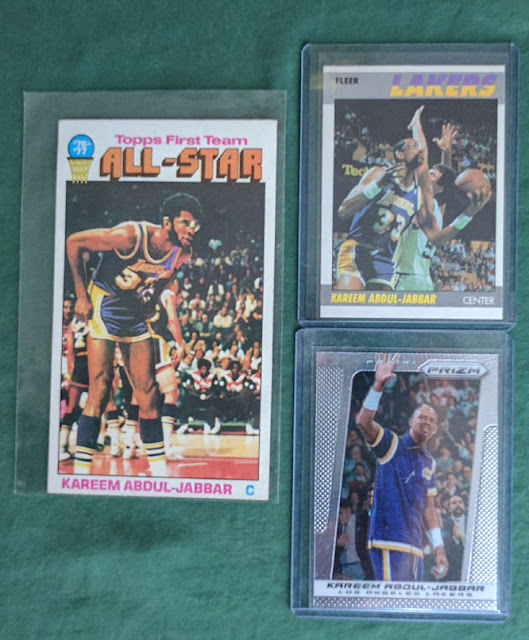 Basketball cards? Yes, there were basketball cards. The highlights for me were these fine additions to my Kareem Abdul-Jabbar PC. 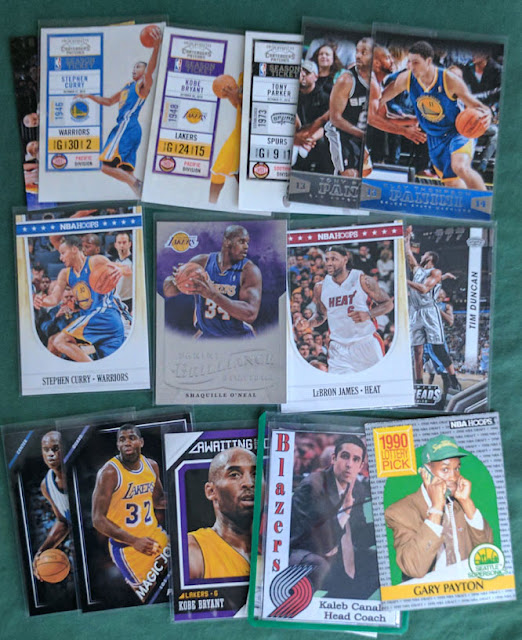 Here are some other keepers I picked out from the ample selection of B-ball. A couple Steph Curry cards, some Shaqs and Kobes. And autographed custom of former Blazers head coach Kaleb Canales. And I thought that Gary Payton card was pretty funny. 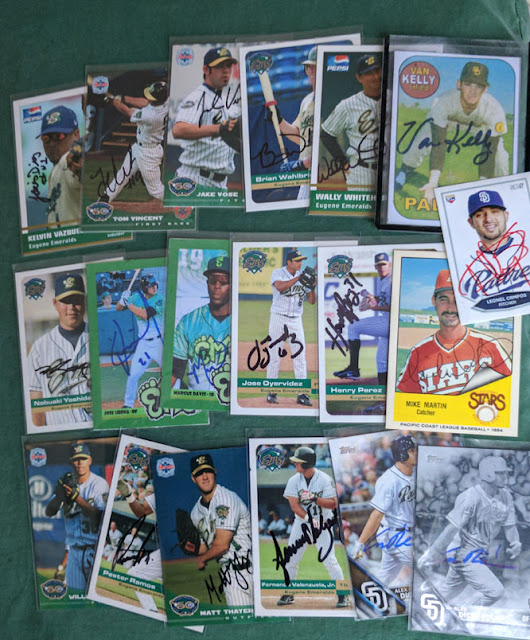 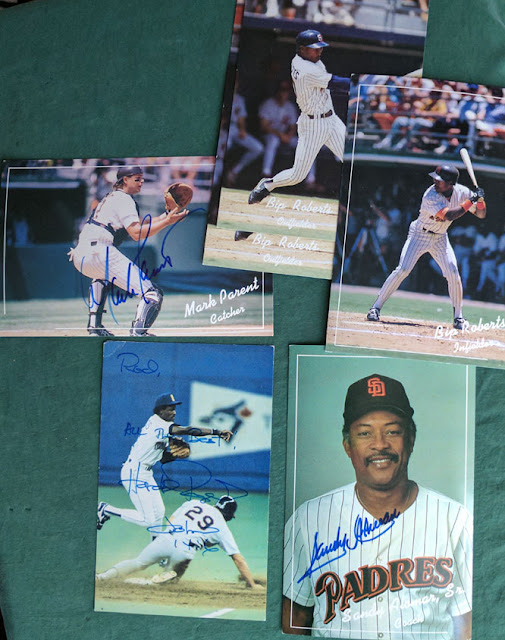 Some postcards, including a couple Bips plus autos of Mark Parent, Harold Reynolds, and Sandy Alomar, Sr. 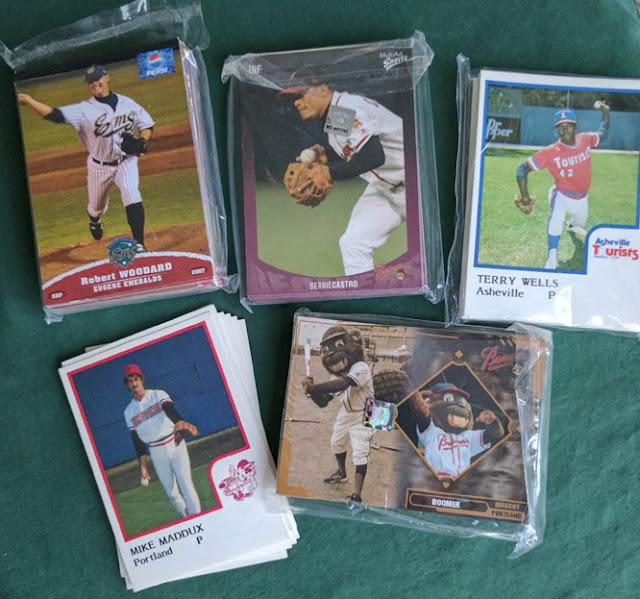 A few minor league team sets.. these are always fun. 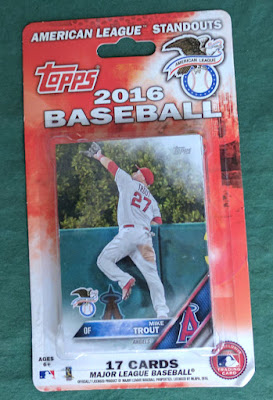 Mike Trout makes another appearance thanks to this sealed AL Standouts set. I'm probably gonna open this before long for my various PCs. 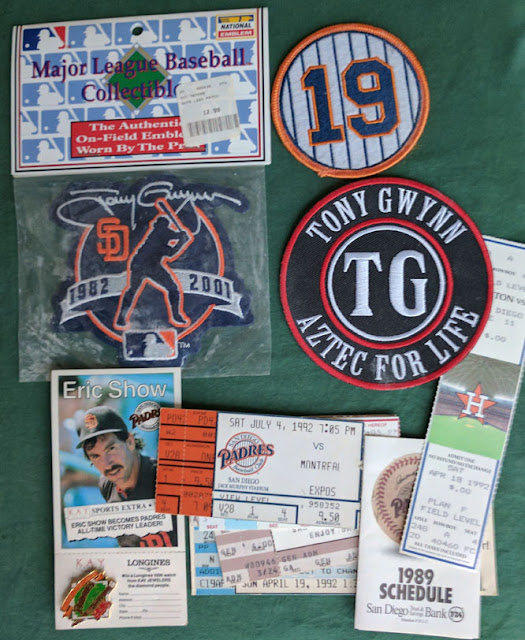 Here are some non-card items, including 3 great Tony Gwynn patches. And looks like Rod isn't too sentimental with his old ticket stubs, as there were several in there among the cards n' such. 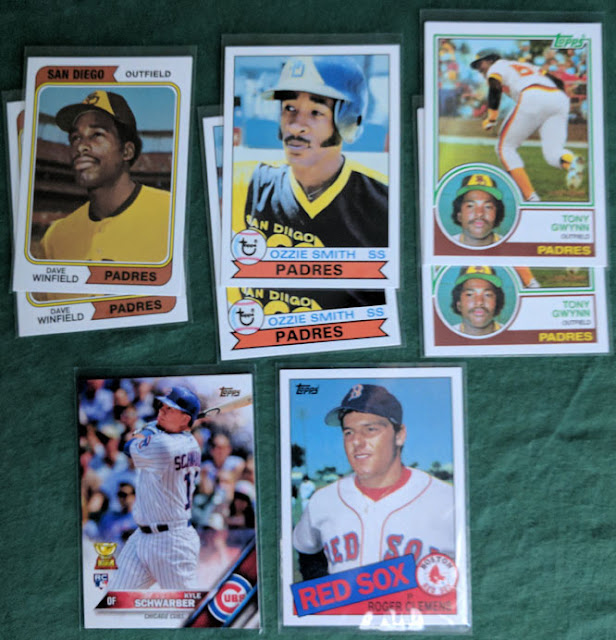 These are all Berger's Best reprints. (Yes, it's really dumb of Topps to put out a 2016 reprint [Schwarber] in their 2016 product.) As you can see, I've got dupes to trade of Winfield, Wizard, and Gwynn, if anybody's working on that insert set or anything. 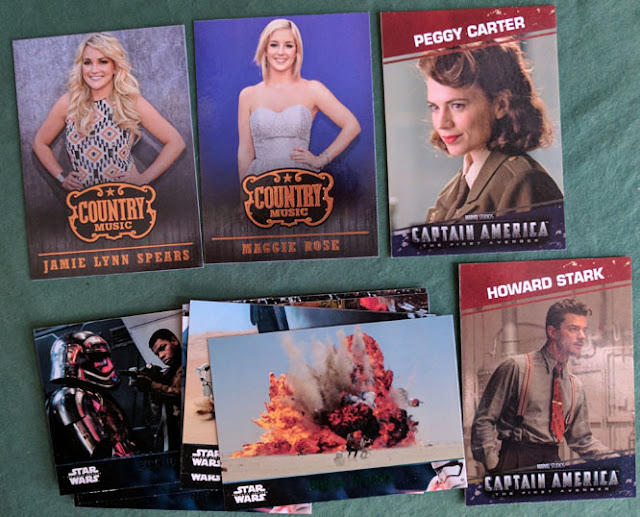 Top row: some attractive women to add to my Girlie Card collection. Bottom: a few more Star Wars cards and a Howard Stark card which I will shoehorn into my little Howard Hughes PC since he kind of inspired the character.

Now onto the TRADE BAIT portion of our journey!! 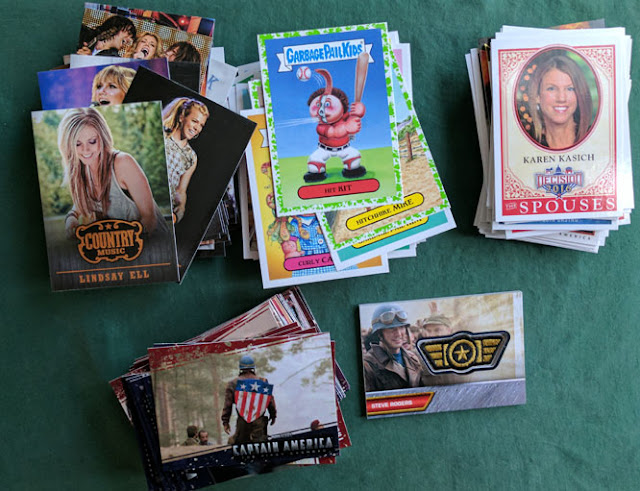 Lots of non-sports that don't really have a place in my collection. Anyone want to trade for any of this? While I've got wide reaching musical taste, modern country is (the) one genre that I avoid at all costs. And I've never been too into Garbage Pail Kids, to be honest.. I'll thumb through them for a chuckle, but I don't need to hang onto them. And there ain't no way I could ever collect political cards. I had to put Karen Kasich, a handsome looking women, on the top of this stack because nearly all the other cards make me sick to my stomach, regardless of party affiliation. Somebody please speak up and trade me some baseball cards for them so I can get them out of my house. As for the Captain America cards, yeah, I'm not big on superhero movies. The thick manurelic is kinda neat, though. 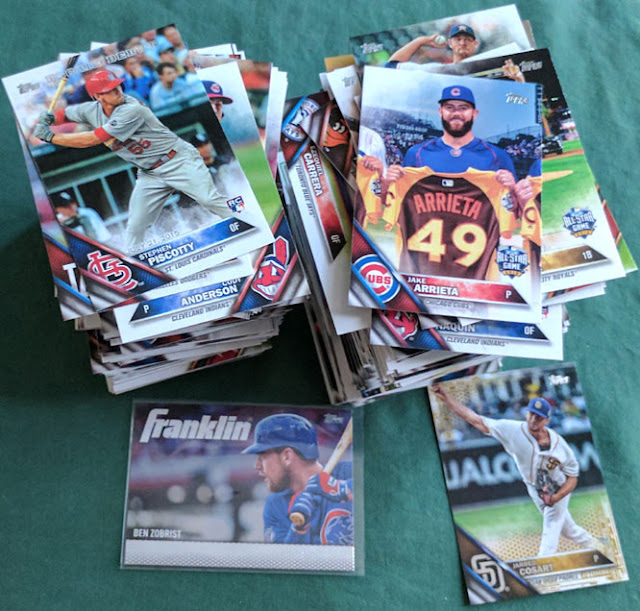 Anybody working on finishing off 2016 Topps? Looks like there was about a hobby box each worth of Series II and Update among the lot. These are ticketed to be sorted out by team into my tradeboxes, so please speak up if I can dump any on you. 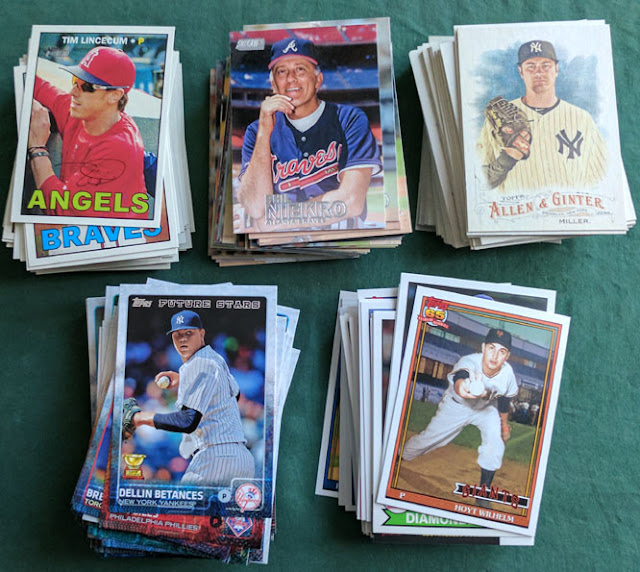 Blasters-worth of some other sets. 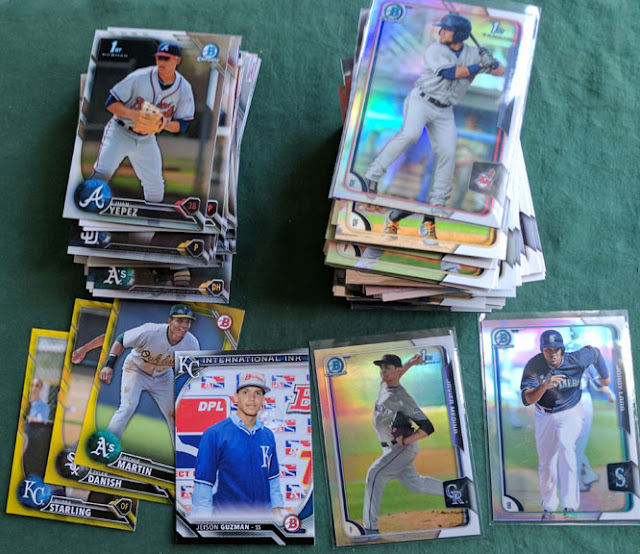 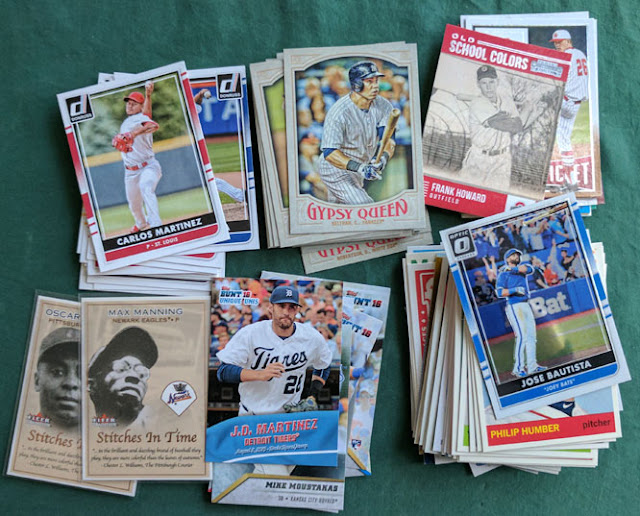 And some more various baseball cards. Up for grabs. 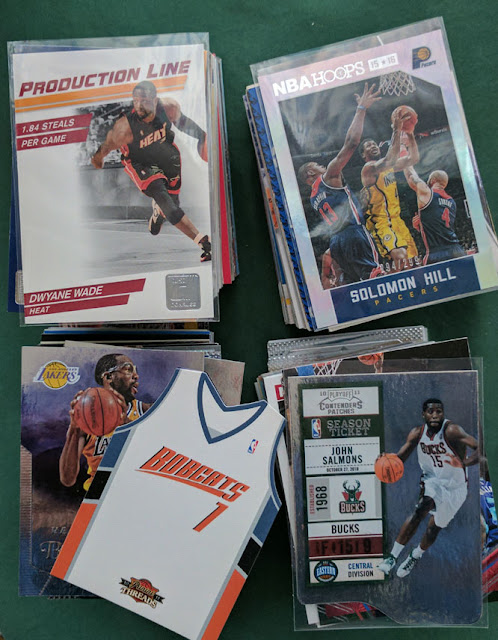 I didn't realize what a big hoops fan Rod is, but yep, a few hundred basketball cards were in the lot. As I said, I've plucked out a few that I was interested in, and would now love to thin these out in trades, so let me know if you're interested. 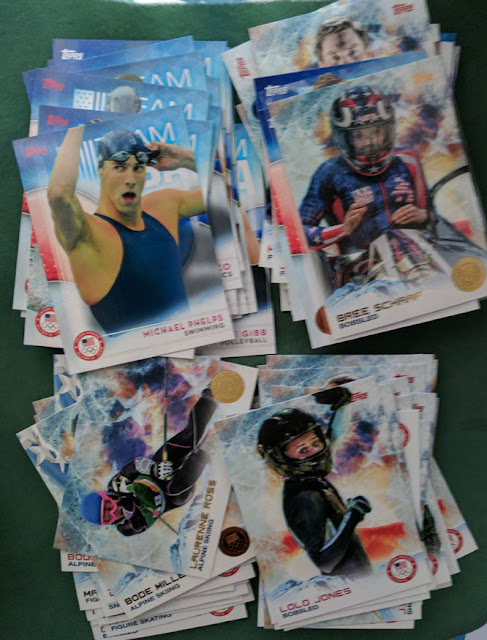 And we close out with a bunch of Olympics cards. Some are from 2014 and some from 2016. Again, I picked out a few to hang onto, but the rest of these are available for trade.


A super huge thanks to Rod for hooking me up with this megaload of cards. I had a lot of fun going through them and came away with a ton of keepers for my collection.
Posted by defgav at 3:22 PM