Gary Carter and the rise of the Christmas Eve Cards

Back around Christmastime, I posted announcing a new niche minicollection I intended to grow in 2017: Christmas Eve Cards (any card serial numbered 12/24). They're sort of like harder to come by relatives of 12/25 cards, not only because there's one less produced, but because card companies rarely use 24 as a print run for parallels. We're off to a good start this year already, recently landing a new "best card" for this little group: 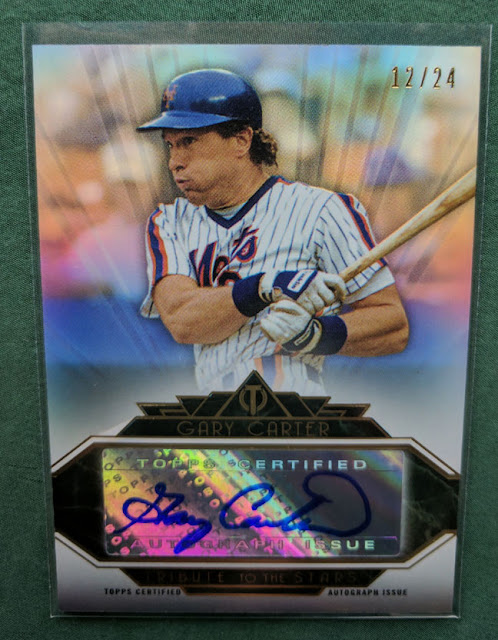 Gotta love Gary Carter. His pure love for the game always shined through. HOFer, 11-time All-Star, Expos legend, key part of the '86 Champion Mets. Looks like he was filled with the holiday spirit, finishing with 1225 career RBI. Coincidence? Perhaps, but I'd like to believe it was his subtle nod to ol' Kris Kringle, calling it quits once he reached that magical number. Haha, no, I'm kidding of course.. a deeply religious man, his RBI total was clearly a tribute to the Baby Jesus.

Normally I'm not a fan of stickergraphs, but this one can be forgiven by the fact that this auto card wouldn't be possible otherwise. It's from 2014 Topps Tribute. Gary sadly lost his battle with brain cancer in early 2012, well before this card could have gone into production. Topps must've had a few sheets of signed stickers from him still on hand, as they included Gary Carter autos in a couple products that year. Looks like that was the last year you could have pulled his auto, without resorting to cut signatures.

And I think I like this style of auto sticker-- holographic scroll effect-- better than the "clear piece of scotch tape" style that is used more often these days. You're not fooling anybody with that.

So that's a nice crown jewel of my Xmas Eve cards, but I also went on COMC to score some more. Unfortunately they don't make it easy for you to search by specific serial numbers (How I would love to be able to just type in "12/24" or "12/25" and see everything available with that serial number, but that doesn't work). However, you can do a search and then sort it by print run.. 1/1s through unnumbered cards. I know that Donruss/Panini Elite often has gold parallels numbered to 24, so I did a search for that product line, made my way to the /24 cards, and picked up a few that were #'d 12/24 and reasonably priced. Let's check 'em out... 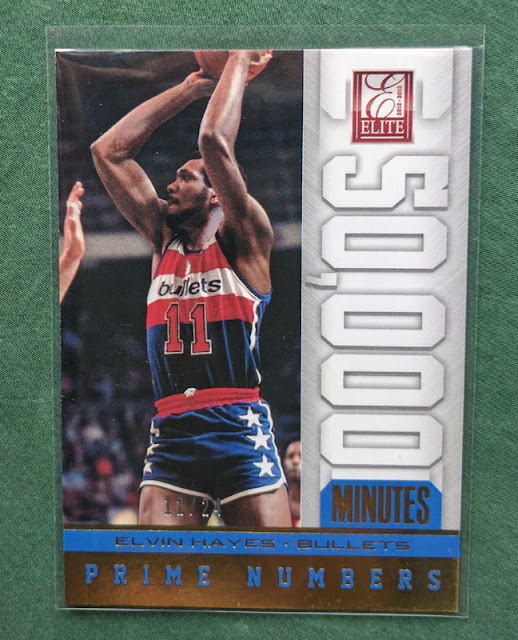 Elvin Hayes is a HOFer who got his professional start with the San Diego Rockets (How am I from San Diego and didn't know that the Houston Rockets started as an expansion team in San Diego? In my defense, they were only there for a few years and had moved to Houston before I was born.) though he had most of his success with the Bullets. This card commemorates the neat fact that Elvin played 50,000 minutes in his career.. not "over 50,000" or "about 50,000" but exactly 50,000. It's a little hard to see, but dangling out of his shorts is the 12/24 serial number. 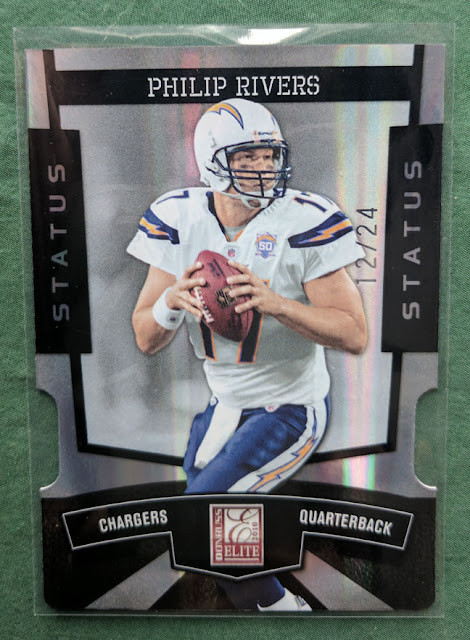 Speaking of sports teams leaving San Diego (***grr.. fucking Chargers ownership***), I was happy to see QB Philip Rivers in my search results, a guy I kinda collect despite my conflicting feelings about the Chargers these past few years. At this point, the team is dead to me, but I'm mainly a player-collector after all is said and done, so whatever. I'm just thankful my interest in football has majorly deteriorated since I moved out of San Diego, otherwise this turn of events would sting a lot more. But anyways, yeah, this is a sweet 12/24 card. 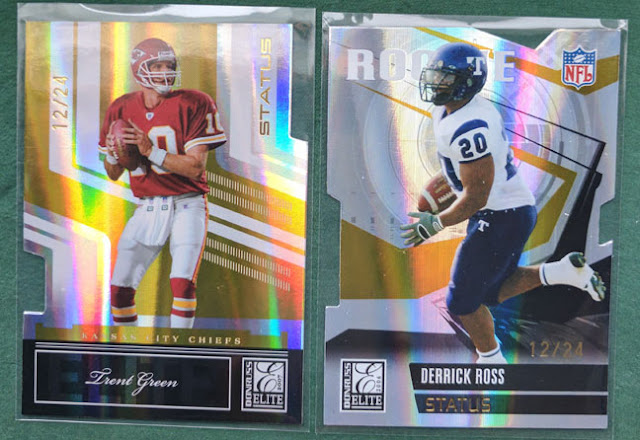 Here are a couple more football pickups. Trent Green is a name that's vaguely familiar to me as a casual football fan. He was originally drafted by the Chargers, then went on to get a Super Bowl ring with the Rams (though their championship run was largely due to his backup Kurt Warner filling in). Trent then had a couple Pro Bowl seasons with the Chiefs.
As for Derrick Ross, he's bounced around with 10 teams since this 2006 RC came out. He's currently with the arena Jacksonville Sharks. 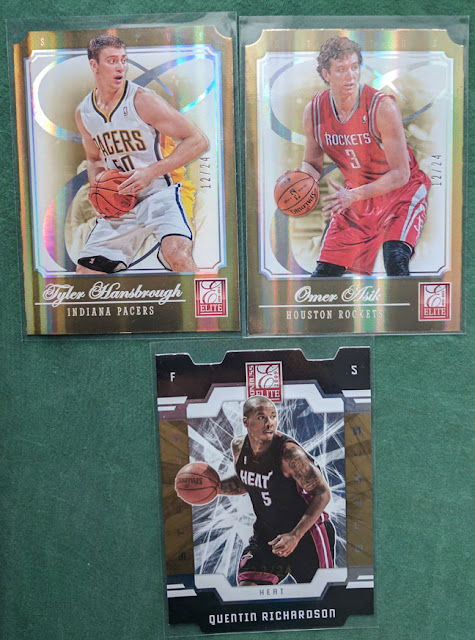 Back to basketball, Tyler Hansbrough was a big deal at UNC, leading the Tar Heels to the 2009 NCAA championship, and has since played for the Pacers, Raptors, and Hornets. Ömer Aşık helped Turkey win the silver medal at the 2010 FIBA World Championship, and currently plays in the NBA with the New Orleans Pelicans. Quentin Richardson played with various NBA teams from 2000 through 2013 and is currently director of player development for the Detroit Pistons. 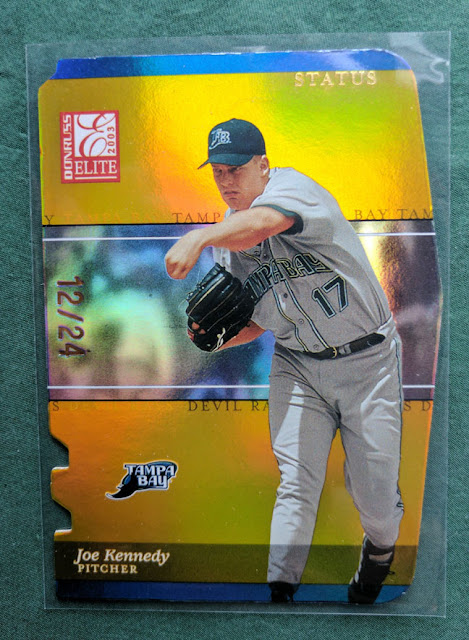 We'll close today back with baseball. You might have noticed that most of these Elite cards are diecut into wacky shapes. This one might be the oddest of them all. It's just... why? But it's shiny and proudly features an extra thick "12/24" foil pressing, so I frickin' love it! Googling Joe Kennedy will give you a ton of results for The Kennedy Joe Kennedy. But narrowing the search down to baseball, I can tell you that this Joe.. oh man, he died from a heart issue in 2007 at 28. That's sad. Turns out he was from my old stomping grounds of East County San Diego, and is a Guy From Grossmont, attending the same JC as me, Grossmont College. So this card hits 2 of my narrowest niche minicollections. Wow.

So yeah, there you have a bunch of cards numbered 12/24. Great to add to this fun stack of mine, and interesting to learn about these players that I otherwise wouldn't be likely to seek out for my collection.
Posted by defgav at 4:12 PM