Forgotten trade partners of the past

Got a couple nice trade packages in this week. Let's take a look.

First up is a surprise PWE from Sports Card Collectors. I suppose it wasn't really a surprise because a week or so earlier, he asked me if I had gotten it. But I hadn't, and forgot about it by the time it eventually arrived. Not sure of the cause for the delay, but it made for a nice 4-card semi-surprise! 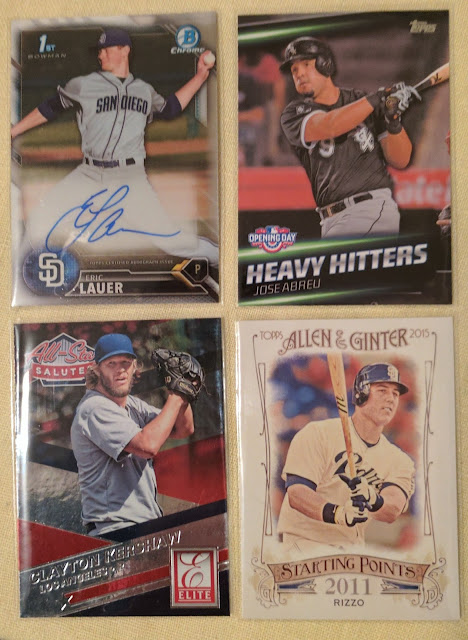 The Bowman Chrome autograph has got to be the star of the show here. Eric Lauer was the 25th overall pick in the 2016 draft out of Kent State and looks to be on the fast track to San Diego in a couple years or so if things go as planned.
Then we've got 3 inserts, with Jose Abreu, Clayton Kershaw, and Anthony Rizzo reminding everyone that his career started with the Padres.

Thanks a lot, SCC! I'll reciprocate with a PWE for you shortly.

Now this next one was fully a surprise. Julie from A Cracked Bat recently made her long-anticipated return to blogging and mentioned she had a bunch of mailings going out to folks she owed cards to. As far as I recalled, we were square, so I wasn't expecting my name to be among the lucky mailings. But sure enough, a bubble mailer full of Padres showed up to my door. Some highlights: 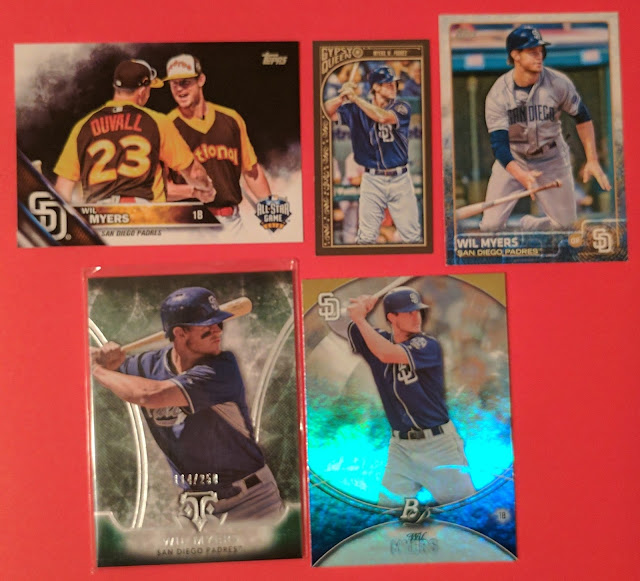 Great lot of Wil Myers cards. I was most excited for the 2015 Topps Mini card that I don't think I've ever seen before. I think there was actually a full team set for the mini Padres in the package. The /250 Triple Threads card is pretty sweet too. 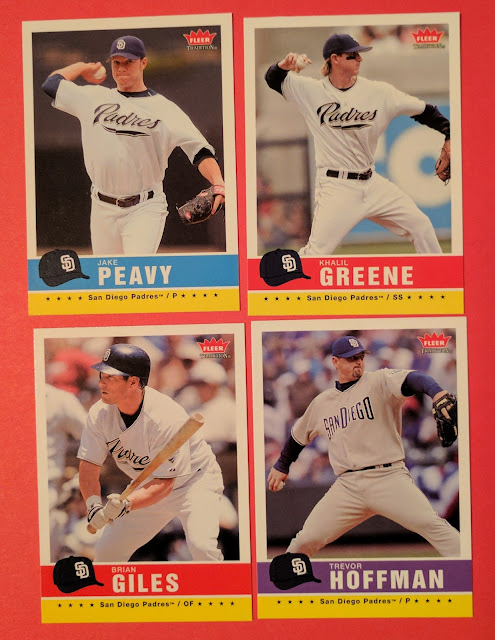 There might have been a team set of these Fleer Tradition cards, too, with these 4 definitely being keepers for my collection. 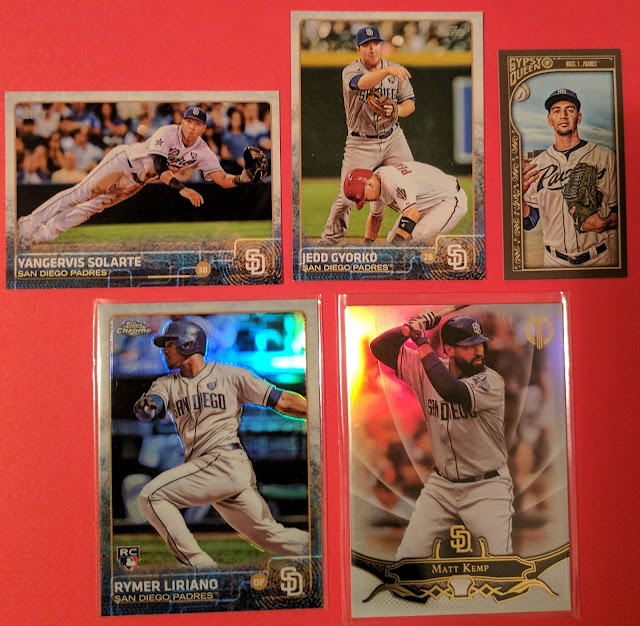 Let's close it out with 3 more minis and a couple shiny cards.

Thanks a lot, Julie! Very kind of you.

She specifically stated in her note (and on her blog) that she doesn't want any cards in return, enacting a "no-trade clause" for the time being. Hey, I'm totally cool with that, though I'm always happy to thin out my Tigers tradeables on her.

That reminds me.. Anybody remember Pat from Hot Corner Cards? His blog abruptly went dormant, with the most recent post being October 4, 2015. He was another taker for my Tigers. I sent him a pretty good-sized brick of 2015 Heritage for his setbuild back around that time. Not that it was a huge deal, but I'm a bit chagrined I never got a return from him. I even sent him a little email a couple months ago checking in, but never heard back. And he had been a generous trading partner up to that point. Hmm, I wonder if something happened to him. Has anybody talked to Hot Corner Pat in the past year? I hope he's ok, just got too busy for cards or something. Makes you think. A blogger could get taken out in a car accident or something, and there's a good chance us guys on the cardsphere would never hear about it.. just wonder why they suddenly stopped posting.

Anyways, sorry to get dark there. Thanks again to SCC and Julie for the cards!

Have a great weekend, everybody. I've got my first card show in over a couple months coming up, so I'm excited for that and hope to bring home a nice haul to show off!
Posted by defgav at 3:34 PM