The Joy of a Completed Set: 1971 Topps, for real this time 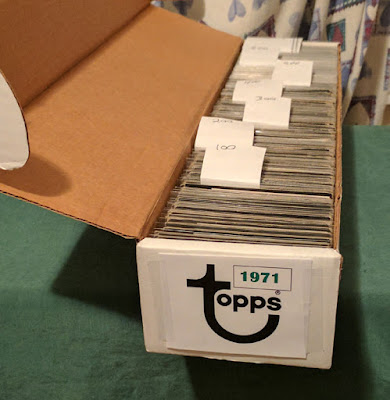 I thought I had put this set to bed late last year. But when I got around to collating it, there was one card missing... 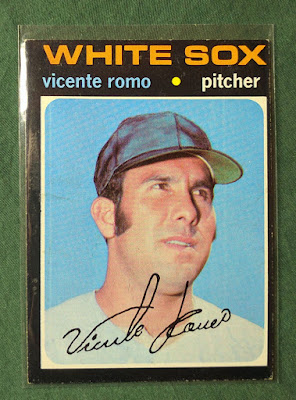 Pesky Vicente Romo and his silky hat. Snatched it up in my latest COMC order. So now my set's complete. Nice!

I'm not going to go all out and show off every card, or even my favorites. If you want to see every card front and back, Scott Crawford On Cards did that in a jumbo post a while ago. The 3 above cards are all "hero numbers" ending in 00, so they were easy to dig out and snap a quick pic of. As far as my favorites off the top of my head, I love the Dick Allen, Vida Blue, Clemente, Garvey rookie.. and of course many of the action shots like Munson and the Royal Crown Ryan.

When I was wrapping up my set, I decided to go all-in and grab as many variations as I could to make my set extra complete. So I'm gonna highlight those variations now. Thanks to the Trading Card Database for enlightening me on most of these. 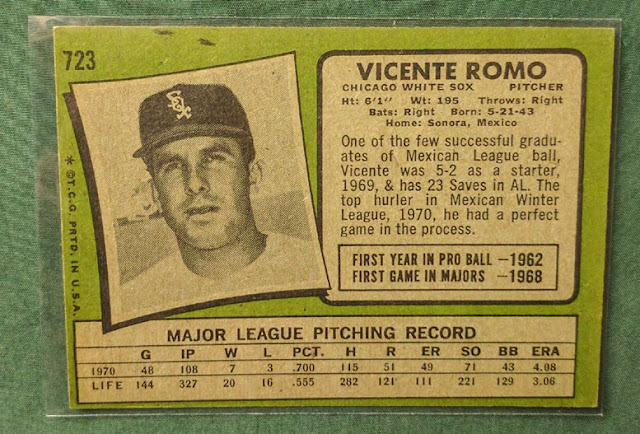 Circling back to the last card I needed to finish my set, this is an uncorrected error, as Romo's birthday is actually 4/12/43, apparently a mistake Topps made on most (all?) of his cards. Also, see those two marks above the photo? That's actually a variation present on most of the 1971 #723 cards out there, not just a flaw on this particular copy. I haven't bothered getting the more scarce variation without the dashes yet, but maybe someday. (As a high-number, it'll likely run you a few bucks.) [update: I've since got it.] 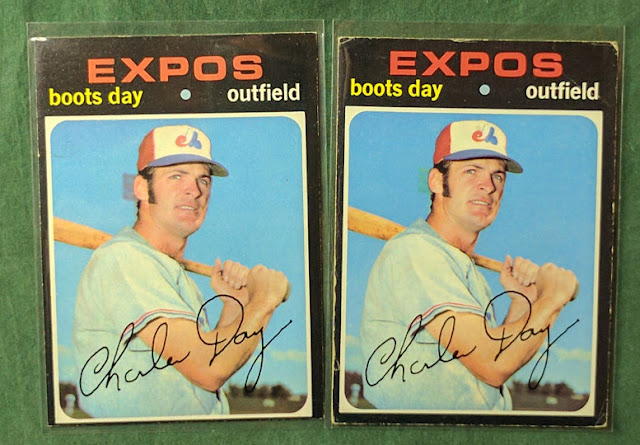 I got lucky on this one, as unbeknownst to me until looking into these errors, the card I already had in my set was the "stadium light airbrushed out behind ear" variation (right), and that's the expensive one. I was able to grab the common "troll ear" variation for under a buck from COMC. 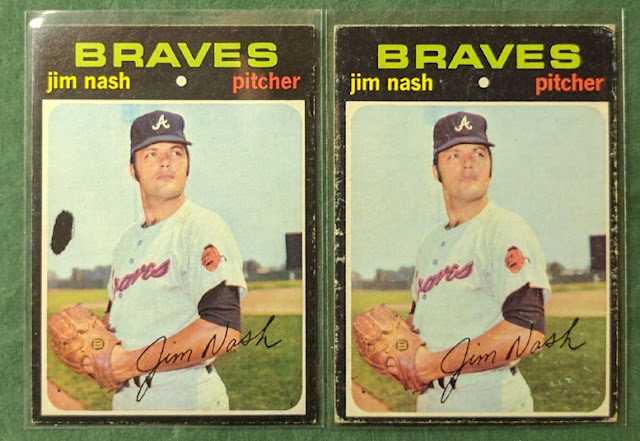 Check out the big black splotch on the left. That's not just a random marker mishap by a previous owner of this card, but rather a strange variation present on some copies of Jim Nash here.

Ready for the boring ones? It's checklist variation time! 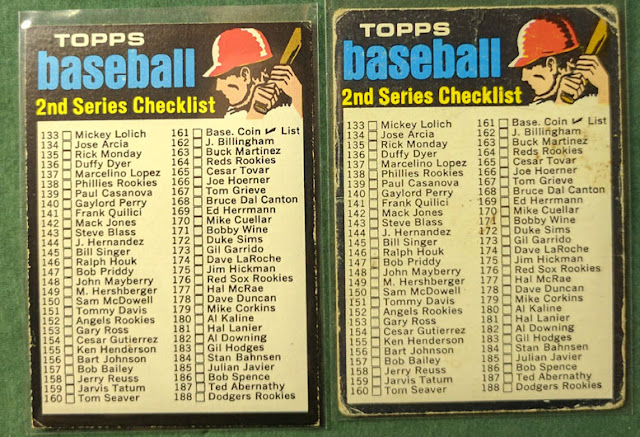 Take a good look at the helmet. The one on the left has white shading on the back of the helmet. The one on the right has black shading on the back of the helmet, plus a little black line over the ear. Also, on the back, the "white shading" checklist has the card number (123) on the bottom far right, while the "line over ear" checklist has the number centered on the bottom. Turns out I already had the variation in with my dupes, so I was all set with this one. (There might be a third variation that features the "line over ear" front with the "card number on the right" back, though if that exists it must be pretty rare because I can't find it on COMC.) 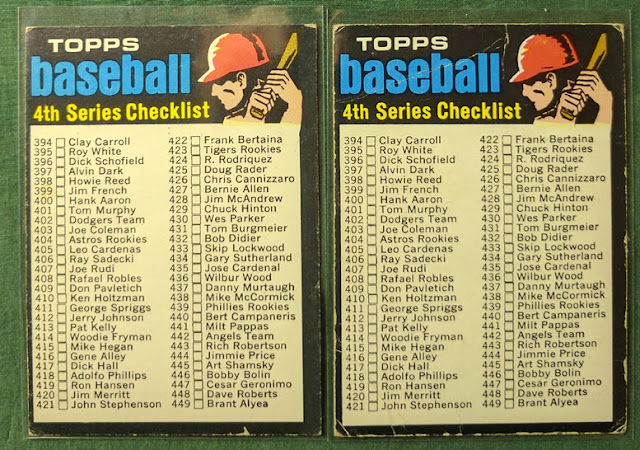 This is a subtle variation, with just the line over the ear on one of the cards, and slightly different shading on the back of the helmet. 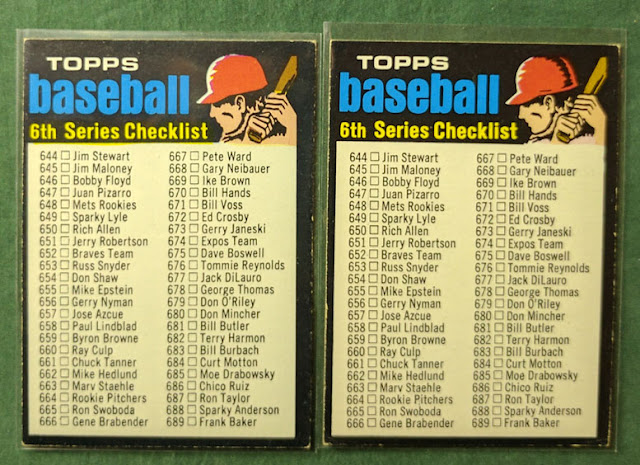 This is the high-number checklist. Again, the shading on the helmet is the difference on the front, and the "no line over ear" card is missing the copyright info on the back. There's a third variation that's harder to find that I might track down someday where there's some black shading on the front of the helmet.. but being a high-number checklist, and a rare variation at that, it's not cheap, and I can't feel good about paying a lot of money for a frickin' checklist variation. [update: I've since scored myself one.]

So there are the 1971 Topps errors/variations I'm aware of. If you know of others I've missed, well, keep them to yourself because I don't want to have to hunt them down. LOL [update: A comment on this post alerted me to one I've missed: the common version of #85 Billy Grabarkewitz features a red dot to the right of his head, but there's a tougher variation that features a light yellow dot instead. Turns out I've got that one, but need the common red dot card.]

One of these days I plan to go through my set and make note of the really poor condition cards that I would like to eventually upgrade (e.g. cards with rips or writing), though it won't be a priority and I have no illusions of this ever being a "high grade" set. And I know some readers have encouraged me to page the set, and perhaps I will someday, but I'm not really a binder guy. So for now, I'm happy with them in the long box. At 752 cards (plus the handful of variations), this is a huge set, so it's quite the accomplishment for me to hang my hat on for a moment before once more unto the breach, turning my set-collecting attention to 1965 Topps, a set I'm currently at 72% with. [update: I've since completed '65 Topps. Woo!]
Posted by defgav at 4:01 PM

Email ThisBlogThis!Share to TwitterShare to FacebookShare to Pinterest
Labels: 1971 Topps, Joy of a Completed Set