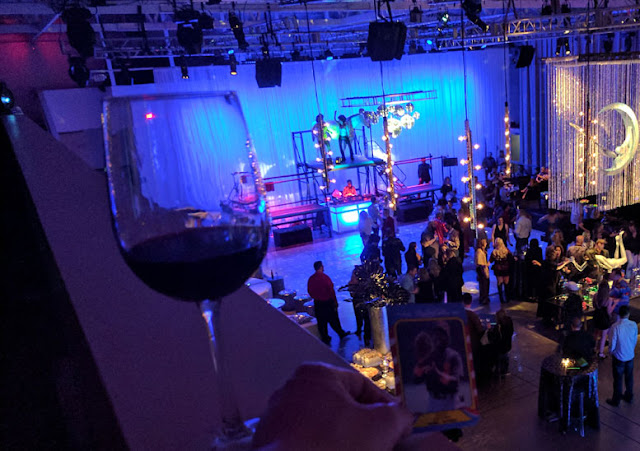 Last weekend was the big annual work party (sort of a belated holiday party). The theme this year was the disco era / Studio 54. It was a lot of fun. There was a DJ pumping up the 70s dance hits while a couple go-go dancers grooved along. Some co-workers dressed up.. lots of sparkly sequins with even a few afro/perm wigs. Lots of drinking and dancing. It's dark, but near the lower right of the photo you can kinda see my wallet card checking out the festivities.

Quick Wallet Card aside, check out Bo's prize for being 2016 Wallet Card Champ. It's not like there's always a winner that will get a prize or that I necessarily pick the winner or anything really, but I thought Bo earned a little show of appreciation for his excellence in flying the WC. I don't think I'll award prizes to repeat winners, so the field is wide open if any of you out there want to make a run at it for 2017. I can't promise you a fabulous prize, but post enough cool/interesting/funny/etc pictures with your wallet card and who knows.

Thanks to staying home during some snow days earlier this month, the second half of January has been busy for me at work trying to catch up, and I haven't really been motivated to bust out a post in the spare time that I've had. So I've gone a week between posts, which is pretty rare for me. 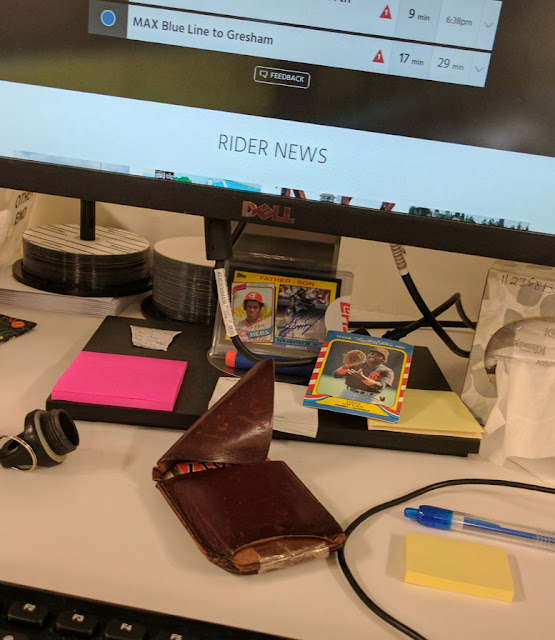 Here's another wallet card photo, showing off the 1/1 Griffey auto discreetly on display at my secure workspace. It's nice to be randomly reminded of my best pull ever.

Back when I got in that Griffey redemption, I really only talked about "whee, sick mojo hit!" but I didn't really talk about the card itself much. But yeah, I like the 1985 Topps Father & Son throwback design. The black border adds a cool touch. It's a great shot of the Kid's sweet swing, and his signature is magnificent as always. I take a minor issue with Ken Sr's part of the card, as his 1980 card is like his least appealing Topps card, so I just gotta scratch my head at that choice by the designers. And in a perfect world, it'd be a dual auto with both guys signing.

I thought I'd do what I could to right that by picking up a Ken Griffey, Sr auto to pair with this card. I thought about a 1980 Topps buyback (it's included in 2016 Archives Signature Edition), since that would seem to make sense. But again, I'm not crazy about that particular card. Plus it has a facsimile auto on it already, and it's a pet peeve of mine when a card features both a facsimile auto and a real auto. So instead I just went on COMC and picked up the cheapest on-card auto they had available. 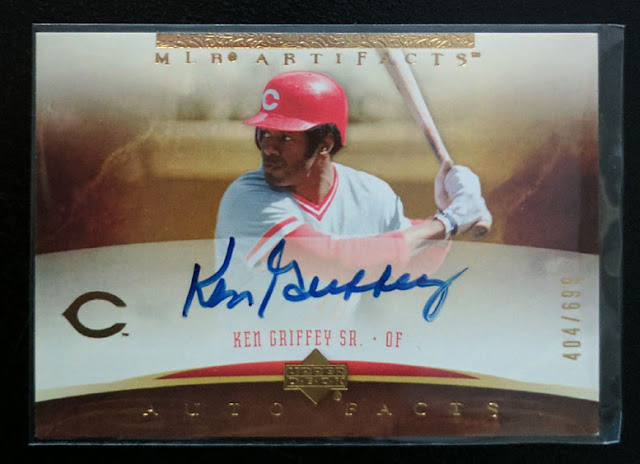 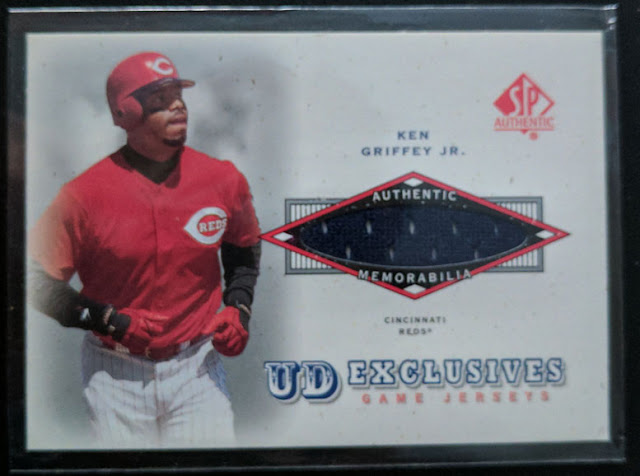 I also picked up my first Junior relic card for $3.25 in a recent combined-shipping eBay shopping spree. Felt like a memorabilia card was the one thing missing from my otherwise well-rounded Griffey PC.

I guess that's all for today, but I've got a bunch of neat stuff to post about soon.
Thanks for swinging by.
Posted by defgav at 3:57 PM