The game-changer of getting a smartphone + Wallet Card update

I was a late adopter at getting a cell phone, with nothing but a landline until finally getting a flip-phone in 2009 that I used through the end of 2016. But my lovely wife helped usher me into the 21st Century by getting me a smartphone for my birthday, a sweet Google Pixel.

Exciting indeed! From a carder perspective, it'll come in handy at the card show, being able to look up a card I suspect is a variation, and check online prices, and reference my set wantlists (rather than worrying about having updated printouts). And it'll be nice being able to read and write blog posts on the go (though I'm not great typing with my thumbs, so I probably won't draft too many posts on it). I also try to keep up with my Twitter feed while I'm on the train to and from work.

While I really don't give a crap about collecting digital cards, I gotta admit I've gone ahead and got on Bunt. I don't really know what I'm doing yet, but I try to logon everyday to get my free coins, and I'll usually rip open a digital pack or two, though I've yet to pull anything interesting. I'm not sure if "adding friends" is really a thing on there, but feel free to hit me up on there, username defgav. I haven't done any trading-- again, I haven't really pulled anything anyone would want-- but if anybody wants to pity-trade me a Padres insert or something, that'd be cool. But yeah, it's something to kill a couple minutes during my daily commute, though I can't see myself getting too enthralled with Bunt.

Also, this phone has a great camera built in, so most of the card pics you'll see on my blog going forward will likely be from it, and I can retire my old, heavy, AA battery-draining Pentax camera.

Oh, and yeah, I'll be able to take more wallet card photos now! Gotta admit, I briefly forgot about wallet card and my 2016 card was still in there for the first few days of 2017. 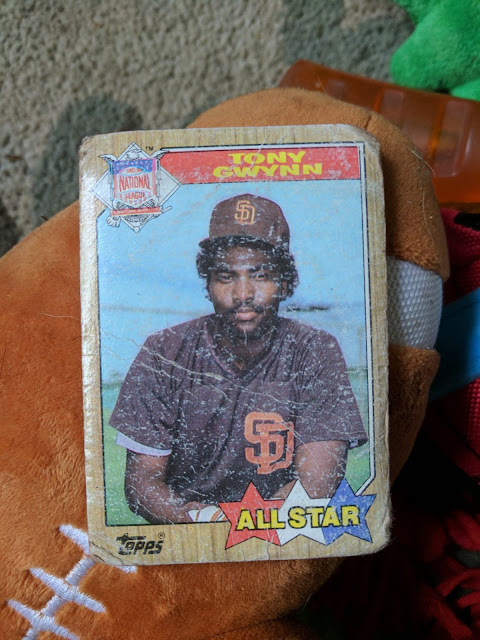 Ol' Wallet Tony doesn't look all that bad, considering. I can't show you the back because I use it as basically a little note card with bits of info, such as the passcode for my work gym. Hey, might as well give the card something to do, right?

But yeah, rather than double down, I wanted to use a new card for 2017. I figured I'd stick with my #1 guy Tony Gwynn. 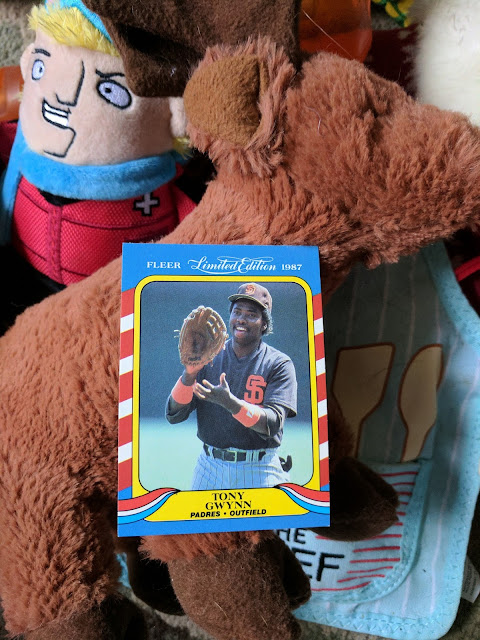 I did mix it up a little this year, though. After two consecutive years of Topps cards, I went with Fleer this time. Thumbing through my Gwynn dupes, this 1987 "Limited Edition" card stood out as the best choice, with Tony flashing a nice smile during some pre-game catch. So yep, that definitely passes the test of it being a card that makes me happy.

It was kind of surprising how many cards I rejected because of what I associate with them. For example, I love Gwynn's 1990 Upper Deck card, but didn't want to choose that one because of a regret attached to it. See, I used to have a gimmicky "parallel" of that card that a company had encased in a block of lucite and resold as like a neat paperweight or something. I jettisoned it in the big downsizing of my collection back when I moved away from San Diego in 2009. It's one of the few items I regret getting rid of (another atop that list being a Dick Allen ball that I got signed by him in person as a kid). I haven't been able to track down another lucite 90UD Gwynn, and if I saw that card in my wallet on a regular basis, it would only remind me of that sad fact.

On the topic of sadness, my wife's family cat had to be put down today. He made an appearance on the blog a couple years ago ("the perils of a collector having pets") while we were cat-sitting. Poor guy got a tumor on his thigh, and it couldn't be removed without him losing the leg, and he was such an active cat, who was all about going outside and hunting mice and whatnot, so it would have been too big of a hit to his quality of life to slash his mobility and have to get used to being an inside-only cat. But yeah, that's definitely a tough decision to make. He was like 12 or 13 years old.
I only thought to mention it because the fact I chose to photo my wallet cards on dog toys this morning, though that was before I heard the news that it was Joey's last day. I'm glad we had a chance to say goodbye to him over Christmas, at least.

Another sad thing to mention, trading card icon Bob Lemke passed away the other day. In addition to all he did for the hobby-- tirelessly cataloging, digging up fascinating old articles and writing his own-- he's probably the granddaddy of custom baseball cards, setting the bar for making neat, design-accurate cards-that-never-were. Though I don't think I ever personally interacted with him other than an occasional comment on his blog, he was definitely a big inspiration when I was getting into making customs. Sorry to see him go.


But back to the game of Wallet Card. Let's go ahead and crown Bo of Baseball Cards Come To Life as the winner for 2016. He was runner-up in 2015, when The Junior Junkie dominated to Ruthian levels. But this year TJ was busy with his first child, opening up the field. Bo continued to show off interesting bits of old New York's lingering past, all the while his beat-up 1989 Don Mattingly Topps Sticker poking into frame.

Congrats, Bo! I'll try to send you over a prize soon. Like a Mattingly auto or something?

And the rest of you guys, share some photos! It's fun! It kinda breaks my heart when I see a "photos from my recent trip" post on the cardsphere and there's no wallet card to be found. Haha.. throw a wallet card in there and it helps keep the post "on topic" with cards.

If you are in for Wallet Card 2017, let's see what card you picked (assuming you've decided to pick a new one), and how the old one has held up. Looks like Brian has led the way with this so far.