I pulled this redemption over the summer from my annual 2 boxes of Archives (which were otherwise pretty forgettable), and had been recently getting worried about it ever showing up.. I checked the website and there was a new "request replacement" option, and I figured that was a bad sign. But then last month Topps tweeted that Junior had just signed a bunch of cards for them and it filled me with hope. FedEx made me sweat it out a bit, but the card finally arrived.

Easily the best card I've ever pulled from a pack (if you want to get technical, I pulled the redemption card, but you know what I mean), and will be damn tough to beat. A Topps Junior 1/1 auto such as this could likely sell on the secondary market scratching at the 4-figure mark. To be honest, I'm a little nervous having this card around the house, even with a rottweiler on the premises and a decent security system. I'll display it at my desk at work for a while (which is in a secure room that not even the cleaning crew has access to) and then after it's sufficiently ingrained in my brain, eventually move it into the family safe deposit box.

As you can see from the edges and corners, this card would obviously not grade out to be a 10.. pesky black borders.. so I don't think I'll bother submitting it. I mean, I've never submitted a card for grading.. but if I ever did, well, it'd be a card like this. 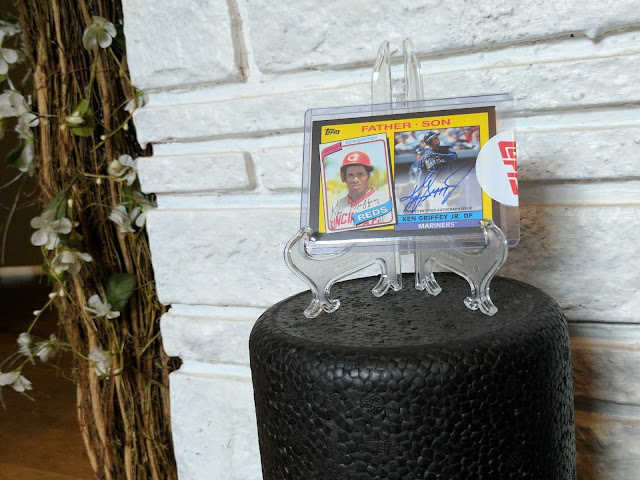 So yeah, it's the pull of my life, and it's gotta be my pick for favorite card of the year. 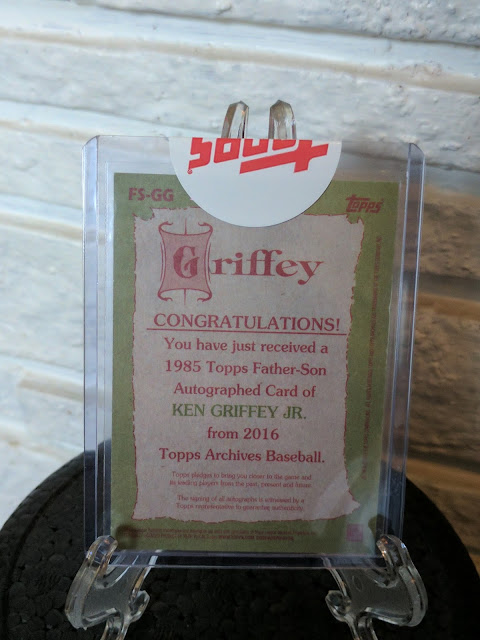 The serial number on these Father & Son autos is on the back at the top center (the base [white border] autos are /10).. so we'll just have to trust that this is actually numbered 1/1. I'd hate to break the sticker to take the card out.. OCD and keeping the card in it's "original, pristine" presentation. But check around on eBay and it will confirm for you that, yes, the black bordered cards in 2016 Archives are all 1/1's. 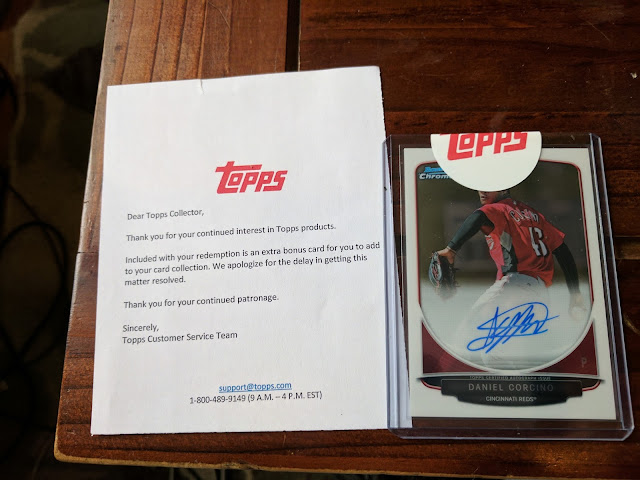 Topps was nice enough to throw in a bonus auto to apologize for the wait. Hey, it was only a few months, so not really necessary, but a generous gesture. Daniel Corcino cracked the bigs with the Reds in 2014, and spent last season pitching well enough in the Dodgers' organization after missing most of 2015 to injury. Looks like he recently signed a minor league deal with the Cubs for 2017.

But yeah, the star of this post is Ken Griffey, Jr, the man elected to the Baseball Hall of Fame with a record 99.32% of the vote. This is my 2nd auto of his. While I like the first one a lot, this 1/1 is clearly king of my Junior PC.. hell, it's probably the best card in my entire collection now.
Posted by defgav at 2:09 PM