My first through-the-mail return of 2017 is in! This is a very sweet success for me. My oldest "pending" request is from when I sent a Topps Pro Debut card of Travis Taijeron to be signed c/o the Las Vegas 51s back on 9/1/2015. Then, after getting into making my own custom baseball cards at the end of 2015, I impatiently tried sending a custom for him to sign at Mets spring training on 3/3/2016. Still nothing, the persistent bugger I am, I then tried via the 51s again on 5/7/2016.

I essentially walked back to the proverbial dugout after those 3 swinging strikes, and I mentioned as much during my 2016 Guys From Granite recap. While bummed, I totally get that he's in no way obligated to respond to fan mail such as mine, so there were no hard feelings.

But I lucked out and happened to catch the attention of someone who has Travis' ear. This person kindly got in touch with me and offered to mediate any signing I needed. I know this person isn't looking for a shoutout and I feel they'd probably rather remain anonymous, so I won't mention them by name, but I'm definitely very grateful for the assist. (Huge thank you!)

I sent 3 copies each of 2 different customs (always nice to offer extras for them to keep if they'd like) to this helper back in November, and I got back all 6 signed the other day. Sweet! 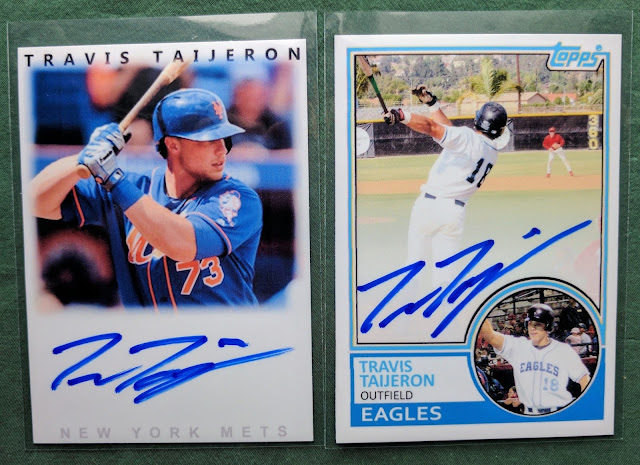 I like the Mets/Leaf Signatures custom a lot, though the Granite Hills/1983 Topps custom is the one I was most happy to get back. I'd love to get Granite customs signed by all active Eagles in pro ball from here on out. This was a big one to check off!


One thing I learned about Travis Taijeron recently (among the funny facts in this YouTube video) is that his last name is pronounced like "Tyrone." Good to know.

Looks like Travis is still with the Mets organization (I figured he'd have been traded or snatched up in the Rule 5 draft), so he'll most likely be stuck in AAA Las Vegas for the 3rd straight year in 2017. Kind of a bummer he hasn't gotten a shot to show what he can do in the Bigs. He was recently invited to the big league spring training camp again, though. (The announcement of which Mets farmhands were invited got a little more attention than normal this year for who wasn't on the list: Tim Tebow.) 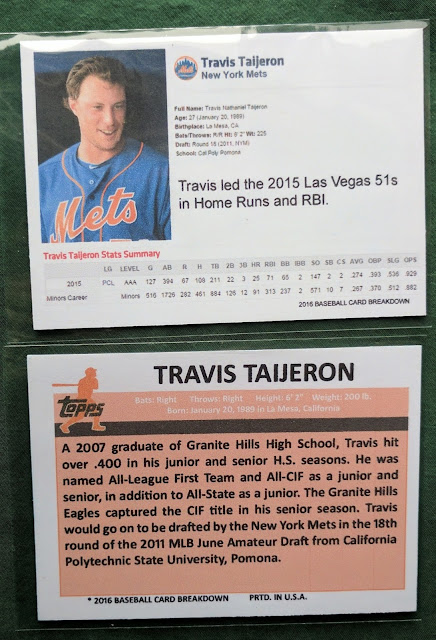 Best of luck with your career, Travis.. Hoping 2017 is the year you crack the majors and go on to big things! And huge thanks again to the intermediary who was crucial at making this autograph return a success!
Posted by defgav at 3:57 PM