It's that time again... Pull Tab Awareness Week! It's the week when we collectors rally together to bring awareness to proper sportscard shipping best practices. This year we're also officially bringing blue tape into the awareness. 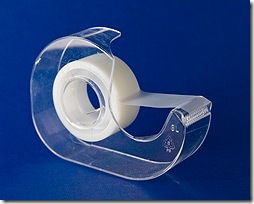 And Blue painter's tape is the best tape to use! It costs a little more than regular clear scotch tape, but it comes off so easily and residue-free that your recipient will love you for it! For you thrifty types out there, know that blue tape can be reused several times! If somebody sends you a card with some blue tape, put it aside to use again later with someone else. In fact, here's a current look at the desk in my card room: 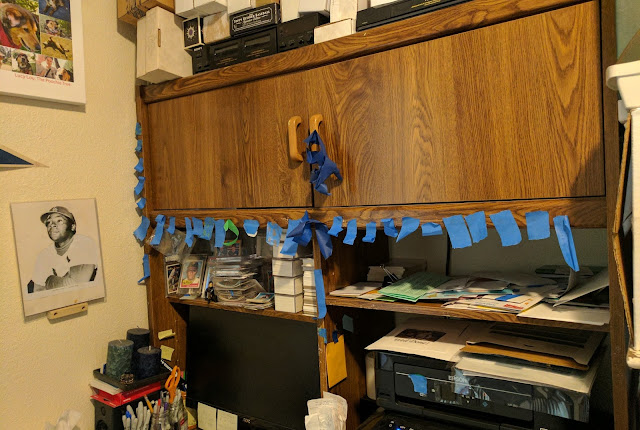 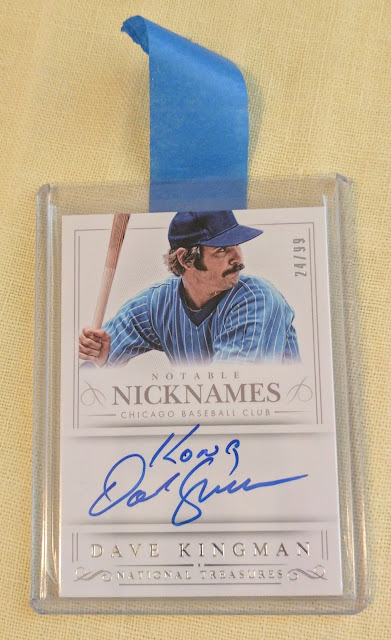 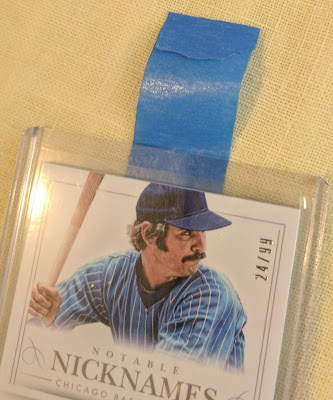 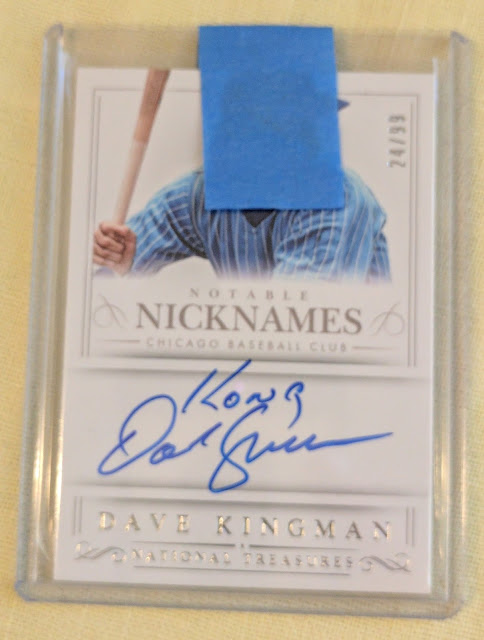 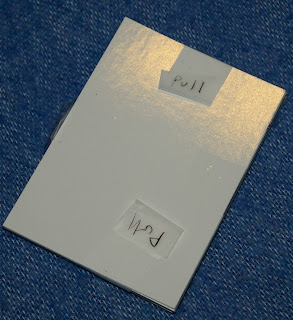 It's just that easy! How has this not caught on? It's so easy to do and so handy for the person getting the cards!

Please, everyone, spread the word. Mention Blue Tape/Pull-Tab Awareness Week on your blog, Twitter, Facebook, and to your trade buddies, frequented sellers, whatever! Even just one retweet or a little "P.S. It's Blue Tape/Pull-Tab Awareness Week. Please use blue tape and make pull tabs" at the bottom of your next blog or social media post! Let's get everyone on the blue tape & pull-tab bandwagon and make all our lives just a bit better.

Thanks for reading and thank you for your commitment to excellence in packaging sports cards!


Before we go, let's take a look at a couple trade packages that I've just received and see how they measure up. 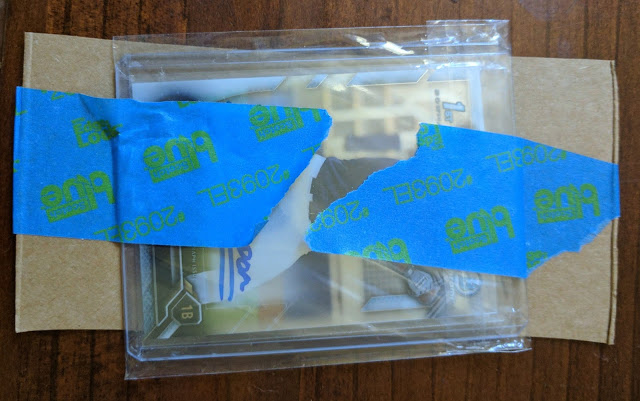 Matt P. from Summer of '74 kindly sent me a one-card PWE. As you can see, he's put the card in a penny sleeve, top loader, and team bag... that's a winning trifecta! Blue tape has been used to secure the card to a piece of cardboard (a second piece for the other side was also involved, but not pictured here).

I'd give him good marks for this packing job. One obvious area for improvement would be pull-tabs, but blue tape isn't very hard to peel off, so we'll overlook it. (Now, if he had used packing tape instead of blue tape, it would have likely stuck more stubbornly on the team bag.) Also, I have heard stories of top loaders in plain white envelopes causing trouble from time to time, getting chewed up in the postal sorting machines and whatnot. But the use of 2 sides of cardboard helped mitigate that danger here. You ideally want to have a smooth PWE (not lumpy), that's slightly bendable. 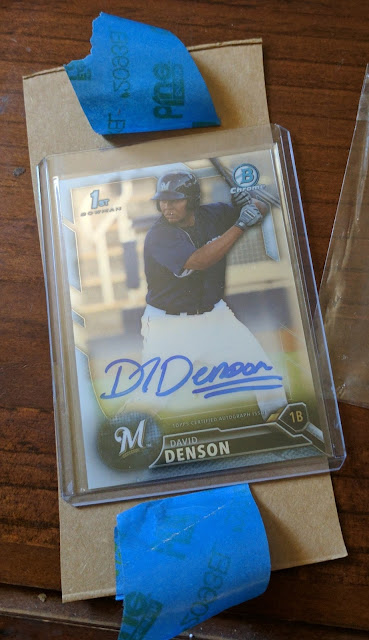 Hey, it's a David Denson auto. Nice! Thanks, Matt!

Next is a sweet thank-you package from ketchupman36, the winner of my 1000 Posts contest a little while back. 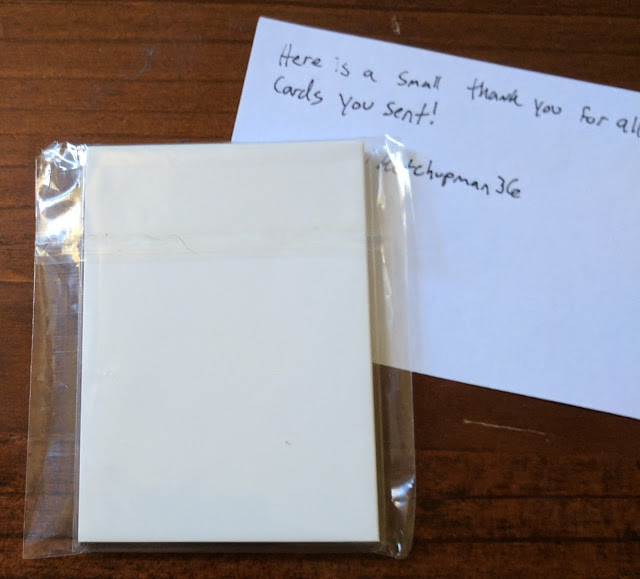 No tape necessary here. Shipped in a poly/bubble mailer, a team bag with 2 thick blank/decoy cards. Between them are 2 cards together in one penny sleeve. 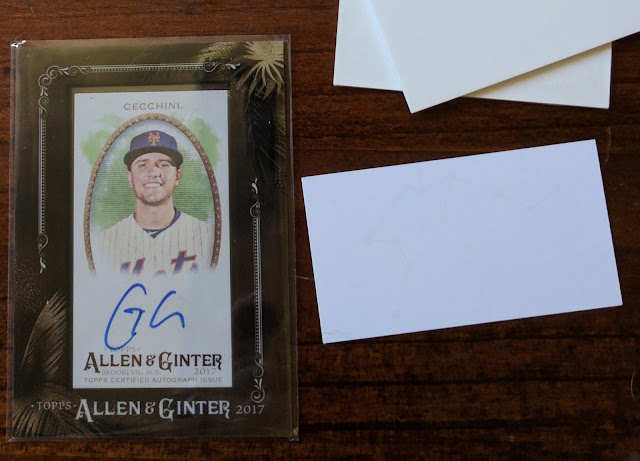 Oh, cool! 2017 A&G Gavin Cecchini mini auto! As for that blank looking card on the right, it's actually a glow-in-the-dark Constellations mini from 2017 A&G, specifically Aquarius. 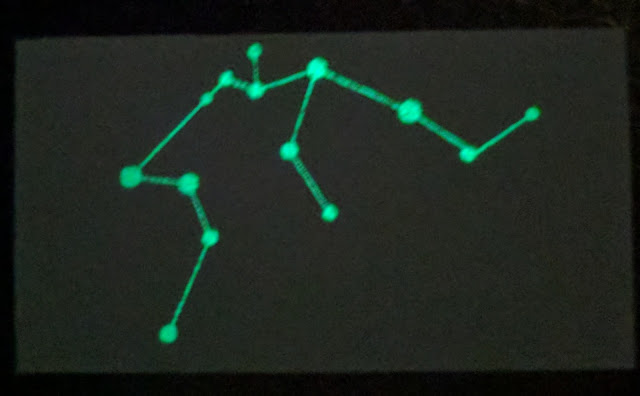 There it is in action. Thanks, man! Much appreciated!

As for packaging, again, great job here. I feel kinda bad that he paid Package Rate to mail a couple cards (as opposed to using a PWE with a Forever stamp), but it was noble of him to pay the extra postage for a safe shipment of the cards in a bubble mailer. Memorabilia cards are generally best not shipped in a PWE due to the non-solid nature of the cards often causing creases around the relic piece when the envelope is slightly bent by the machines during sorting (not to mention by postal workers who might not always be gentle with mail). Similarly, framed minis, such as the Gavin auto here, probably wouldn't be wise to send via PWE either.