I'm finally pretty much caught up with card blog reading. I do the majority of this activity during downtime at w0rk, so when I had to go out of town for a few days, I fell behind, then the following week I was busy making up for that lost time, without much downtime. Then the week after that I had jury duty a couple days, so yeah, it took me a while to get caught up.

Anyways, before my trip, my wife and I caught a Portland Pickles game. Pickles are all the rage right now. Apparently Pickle Rick is a big hit in a recent Rick & Morty episode I haven't watched yet. But the Pickles I'm talking about are a collegiate woodbat baseball team who play in a stadium that's just a convenient Max train ride down the line. 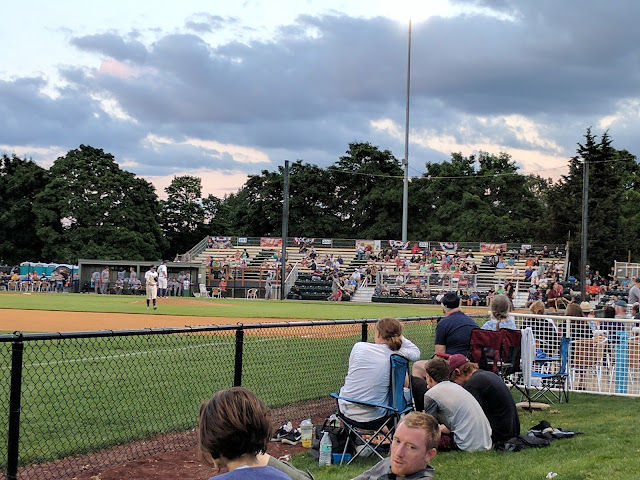 It's a nice little stadium and tickets are cheap, so it's a good way for us to catch some live baseball. The team consists of college kids keeping busy during the college baseball offseason, as is my understanding. So nobody I've heard of, though I should really keep track of the roster at games I attend so maybe one day down the line I can be like "hey, I saw so-and-so back before he was drafted and became a star!" As far as other baseball options in Portland, there's also the Hillsboro Hops (Diamondbacks A-ball affiliate), but that's further away from us and more expensive. 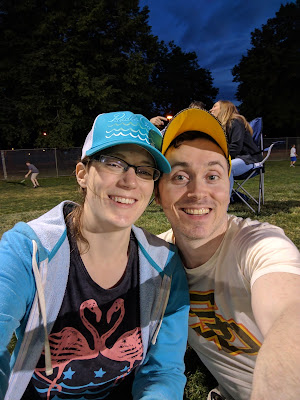 It was Craft Beer Night, so we had a couple reasonably-priced quality brews and got a little tipsy, took a few selfies. 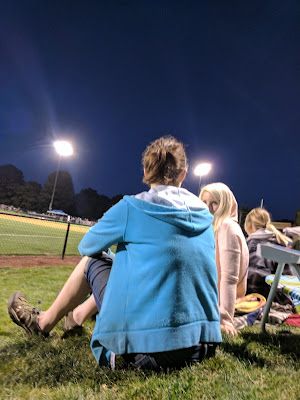 Small world; we were sitting close to a former co-worker of my wife's and they caught up for a bit on our way out. 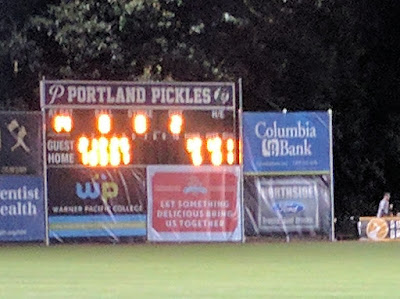 I wasn't able get a great photo of the scoreboard, but the home team was getting spanked, trailing 12-4 in the fifth inning. With all the scoring, the game wasn't moving too fast, inning-wise. Since I had to wake up at 4:45 am for my morning flight, we cut out early. Miraculously, after we left, the team mounted an incredible comeback and won the game in the 9th, 14-13. Bummer we missed the excitement, but nice that they pulled out the win. They're now 3-0 in games we've attended, so that's cool.

The Pickles eventually made the playoffs, and play a must-win game tonight to keep the season alive. Too bad it's such a short season, as I'd love to catch another game, but looks like we'll have to wait till next year.


Switching gears here, but I wanted to work some cards into the post somehow. 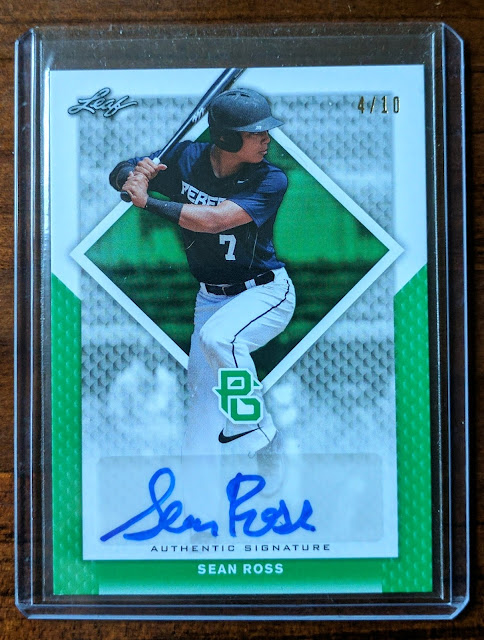 It's not a Pickle, but it's green and features an amateur player. Sean Ross was drafted by the Blue Jays out of Granite Hills High School in the 40th round this past June, but decided to stick with his commitment to attend San Diego State University instead. I'll be rooting for him to perform well with the Aztecs and move up the draft board.

I wasn't expecting him to have any cards out there, but took a look on eBay and discovered he was included in 2016 Leaf Perfect Game. I kept an eye out for a good deal on one of his cards, and ended up landing this green auto #'d 4/10. (Kicking myself for just missing out on the 1/1 parallel that ended days before I started looking.)

The other Granite Hills Eagle to be drafted this year is Jayson Rose. The Brewers took him in the 8th round out of the University of Utah. Looks like he's starting tonight for the rookie league Helena Brewers. So far this season, he's got 35 strikeouts and just 8 walks in 27.2 innings, though he's given up 28 hits. I'll be hoping he's able to move up the system and make it to Milwaukee before long.

I took a look for any cards from him, and again Leaf Perfect Game came through. This one is from way back in 2013 when Jayson was still in high school. Was only able to pick up the base auto, but I'll keep an eye out for a nice parallel. Sure looks like the signature says "Jason" not "Jayson"... hmm. (Funny enough, I went to school with a kid named Jason Rose, but I don't think there's any relation.) I've got a pending TTM request out to him; really hoping that comes back successfully one of these days. I'll be interested in comparing the signatures. Maybe I'll get lucky and he'll be included in Bowman Draft or something.

Anyways, thanks to Sean and Jayson for doing my high school proud, and best of luck with your careers.
Posted by defgav at 3:22 PM