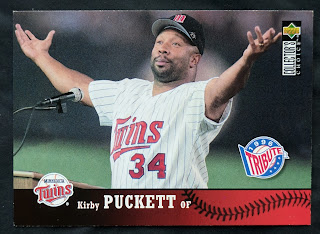 I liked collecting Kirby Puckett during my initial stint in the hobby as a kid in the early 90s. Great player and seemed like he had a lot of fun playing the game. Then, you know, the health problems prematurely ended his career on a sad note, and he got into some trouble in his later years, and it seemed perhaps he wasn't the sweet teddy bear fans thought he was. Then he tragically passed away not long after. When I prepared to move out of state years back and it came time for me to hack down my dormant collection into a manageable couple boxes or so, the Puckett PC was among the cards to get the ax. And when I eventually re-entered the hobby, he was nowhere to be found on my wantlist.

But you know, I'd occasionally wind up with a Kirby here and there, and well, I liked them. He's got fun cards, damn it! And so I eventually forgave him for whatever lingering issues I had with him, and dove into collecting him again, even bumping him up to a "high priority" guy I collect.

When talking with Brian from the Twins-leaning Highly Subjective and Completely Arbitrary, I mentioned I'd be a receptive dumping ground for any Kirby dupes he was looking to shed. Then a while later when he had a chance to sort out his collection, he delivered a terrific lot which I'm showing off here today. 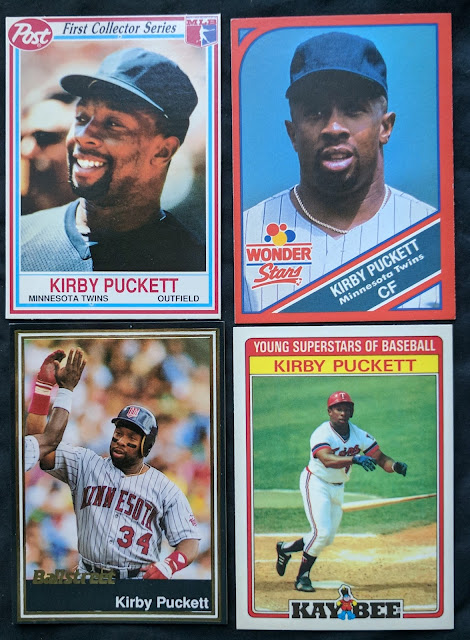 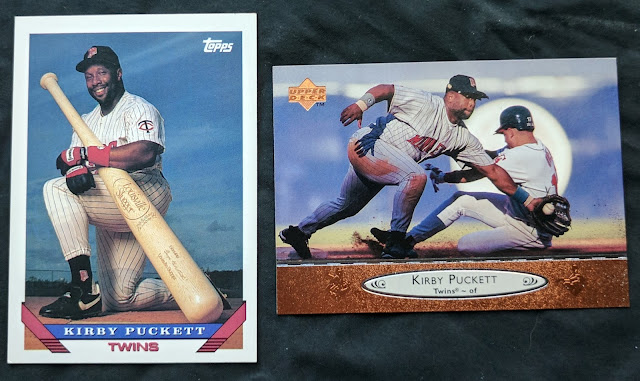 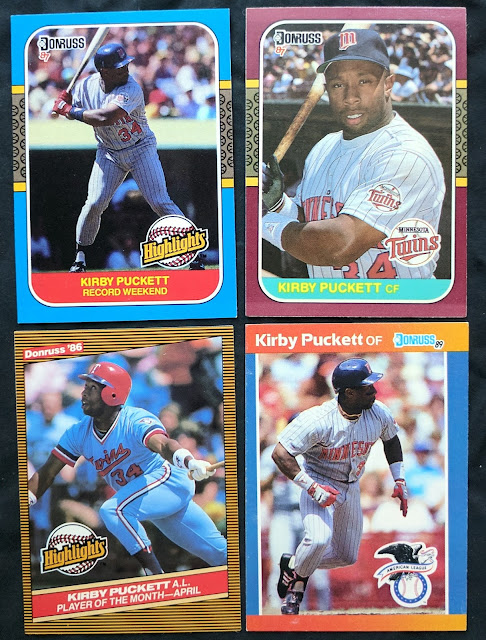 Here's some late 80s Donruss cards with different border colors than we're most accustomed to. 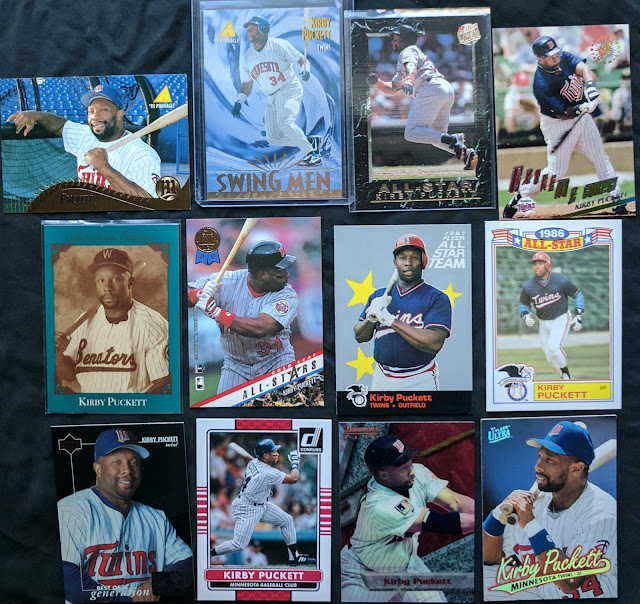 Some hologram action. Pretty sure I need that foldable card with Gwynn in my Tony PC, but I think I'll keep it with his buddies in the Puckett lot. 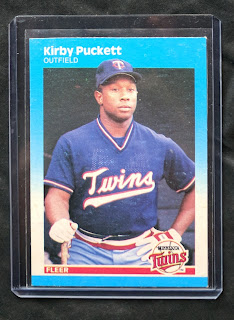 At first glance this is just a typical 1987 Fleer, but nope, it's a much harder to find Wax Box Bottom. 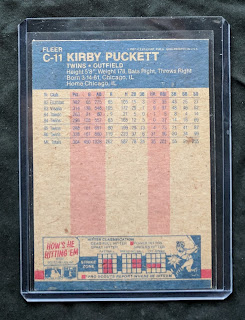 Very cool. Big thanks for all the Pucketts, Brian! I've got some cards set aside for you, and I'll be keeping an eye out for more at this weekend's card show and plan to send you out a package next week.

Oh, and Brian also included a bunch of non-Kirby cards for me, but I'm going to save those for another post so I can keep this one just for my Puckett PC and can link it on my wantlist.
So yeah, let's take a look at the rest of my cards of his. 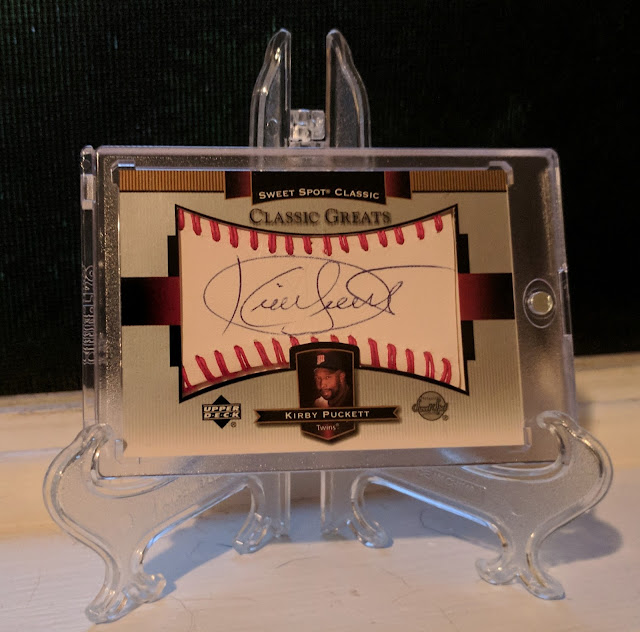 Of course here's the centerpiece, the auto that I just showed off less than a week ago. 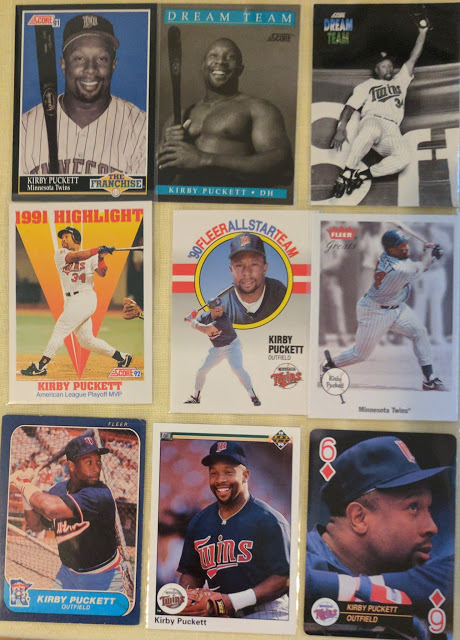 Some cards I already owned. I believe most of these came from the time(s) I bought an entire dimebox for cheap. 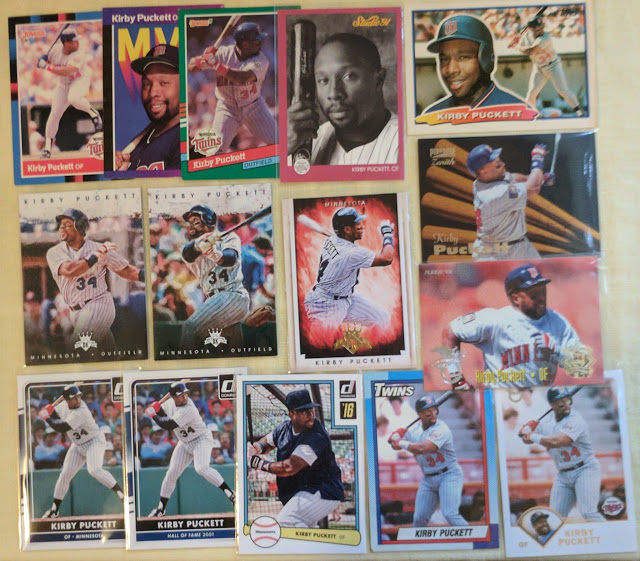 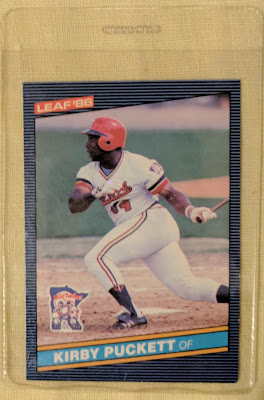 Here's the only remnant from my childhood Puckett PC, a personally pack-pulled 1986 Leaf card that I held onto among my other "good cards" that used to be worth a few bucks back in the day. 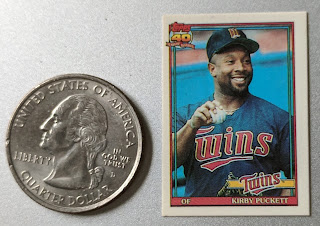 And a last minute addition, a micro 1991 Topps, part of a big micro trade package from Hunter that I'll cover more in an upcoming post.

So there you have it, my Kirby Puckett PC as it stands as of 8/17/17. Thanks to Brian, looks like I'm already over halfway to my standard player collection goal of 100 different cards. I'd enthusiastically accept any cards I'm missing in trade.. even the overproduced likes of '90 Donruss and '89 Topps. Always a rare occasion when you can actually want such cards! lol. As for specific notable cards I'd like to add one of these days, definitely need at least one 1985 rookie card. There's also his 1984 Fleer Update "XRC" but that's pretty expensive and if I was gonna spend that much on a Kirby, I'd probably rather go after another auto instead (2003 Topps Retired and 1996 Leaf Signature being atop that wishlist). But who knows. Anyways, thanks for reading!
Posted by defgav at 3:48 PM