Here are some cards I picked up off eBay recently, with some tag-along cards that I grabbed with little-to-no additional shipping cost.

This post is soundtracked by a somewhat obscure band I like called the Gandharvas. They were an alternative rock band in the 90s that put out 3 albums but never really found mainstream success. As far as their sound, the closest comparison to a better-known band you could make would probably be Blind Melon and maybe a little Jane's Addiction and Stone Temple Pilots. They've got a handful of songs that I really love, and for whatever reason, I associate with the summer heat (I have a few favorite albums/songs that I only like to listen to in the summertime, and similarly some others I only like to listen to at night). So since I'm in the middle of a brutal heatwave, seems like a good time to bust out the Gandharvas. 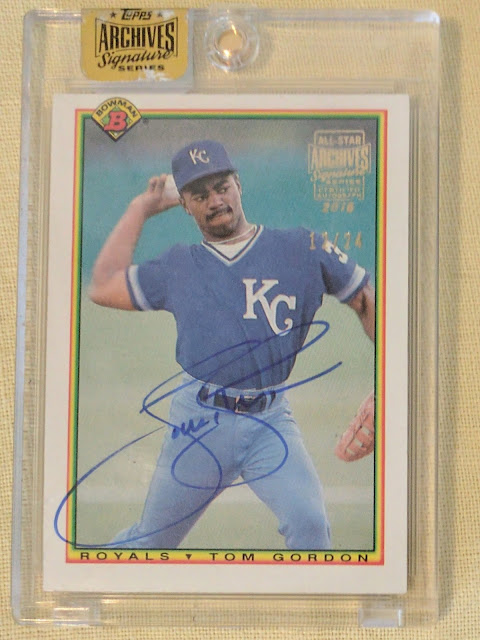 Here's a Tom Gordon auto I won for under $5, then found 5 other cards ending soon from the seller (well, plus a few more I put low bids on but didn't win), and ended up with the lot for a total of about $25.

Since this card is encased, let's go with the song "Hammer In A Shell" here. (If only this was a Hank Aaron card, it'd be a very apt song to use! Or like if the song was called "Flash In A Shell".) 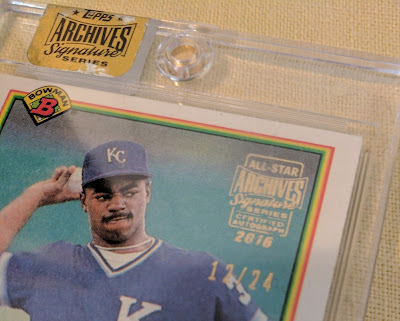 My interest in this card was the 12/24 serial number. Love adding to my little Xmas Eve Card collection when I can. 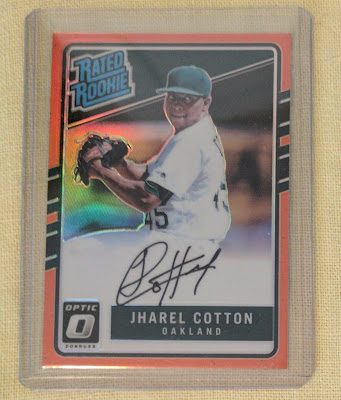 Jharel Cotton had a nice September call-up with Oakland last season, but hasn't had the same luck this year. Still though, he might pan out to be a solid top of the rotation starter. So this Rated Rookie orange refractor parallel (#24/99) caught my eye and threw a bid on it. 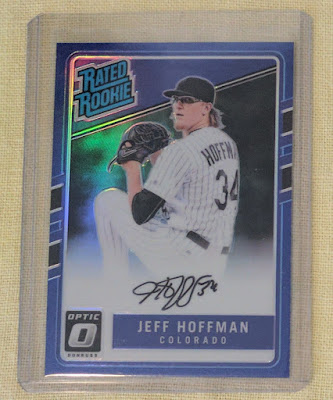 And here's another Rated Rookie refractor auto, this time a blue one (#23/75). Jeff Hoffman has pitched some nice games for the Rockies this year, though his overall numbers aren't great. But again, solid young pitcher, threw in a bid and ended up winning it for about $3. 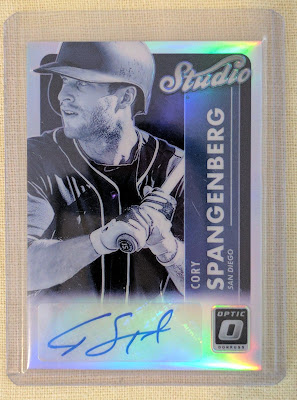 I like Cory Spangenberg alright. He missed a lot of time with injuries, but seems to be feeling good these days. While somewhat of a bust as a #1 draft pick for my Padres, he looks like he's panning out an adequate major leaguer, at least. I sort of regret this purchase a little (stickergraph.. blah), but hey, it was under $3 with combined shipping.

Spangenberg is pretty solid defensively, too, making plays in the infield time after time. That was a corny segue to the next song, a "heavy" cover of the Cyndi Lauper hit "Time After Time." The Gandharvas version isn't exactly a favorite of mine, but it's good for a curious listen.

They're from Canada, by the way, forming in Ontario in 1989. On that note, a guy whose big league career got started in Canada in the 80s was the Big Cat himself... 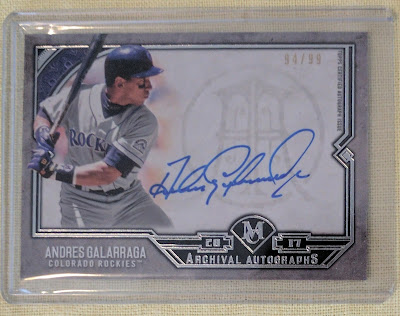 Yep, Andrés Galarraga came up with the Expos before really ratcheting up his numbers in Colorado. Seems like he's been signing for Topps a lot lately. Still, I was surprised to win this nice auto at just 3 bucks. I don't really collect him at all, just a dumb "why not?" purchase for me. (I believe I had had a few drinks when placing these bids. eBaying under the influence is probably responsible for more of my collection than I'd care to admit.) 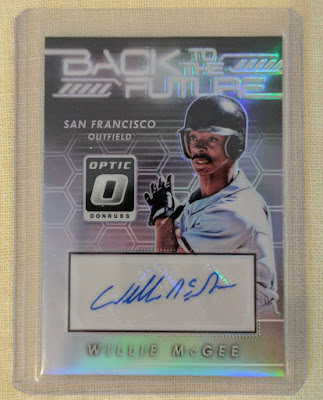 The final card from this combined shipping win is a Willie McGee auto, it was the most expensive of the "add on" cards, but still a little cheaper than the original win, the Tom Gordon. He's a guy I liked back in the day, but again not really a guy I collect. I wonder how Panini gets away with using "Back to the Future" without running into objection from the movie studio who put out the film.

Willie often gets teased about being one of the least-attractive baseball players of his era. I'm sure his personal life is fine these days, but I bet in his younger days he did lots of girl-watching from afar, which leads into the next song...

Not to harp on looks, but another guy giving McGee a run for homeliest ballplayer of the era is Zane Smith.. 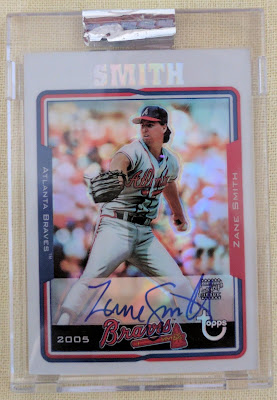 I always keep an eye out for Topps Retired refractors for a good price. Landed this Zane Smith for a few bucks. Again, not a guy I collect, but happy to add another card to my collection of Retired refractors. 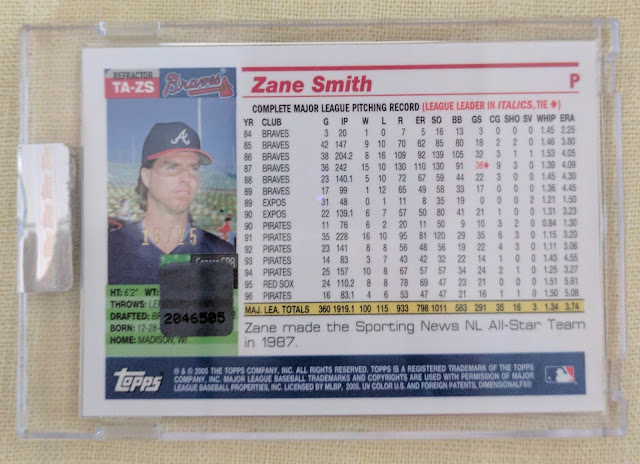 Zane was never really a star (may have been a Sporting News All-Star once, but never made a MLB All-Star team), but some solid seasons there, especially helping the Pirates get to the playoffs in 1990 and 1991. 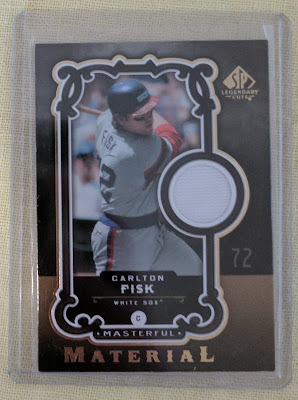 For just 99¢ and no additional shipping, I picked up a Carlton Fisk relic to tag along with the Zane auto. Just a plain white swatch, but still a fine looking card. I believe this is my first Fisk relic, which completes a trifecta for me since I already had an auto and his '72 rookie card.


Man, I love the song "Kicking in the Water".. upbeat, lazy, summertime song. I couldn't find a YouTube video with just the title track, so there's the full album (though I'm specifically meaning to link to the song that starts at 35:48, which you can jump to with this link).
A minor league player I collect is currently kicking it in lakes, specifically with the Great Lakes Loons... 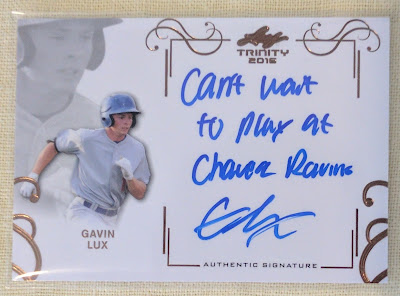 These days I'm selective which Gavin Lux cards I go after; he has a ton out there since being drafted by the Dodgers in the first round last year. But I wanted one of these inscription cards and was able to land this one for a good price. Just neat to have a little hand-written note from the guy. As for Gavin's quest to play at Chavez Ravine, he hasn't had a great year in A-ball, currently batting .222. But he's still only 19, so he's got plenty of time to develop.

After I won the Lux, I took a look at the seller's other auctions that were ending soon and came across a familiar name to many of us on the cardsphere... 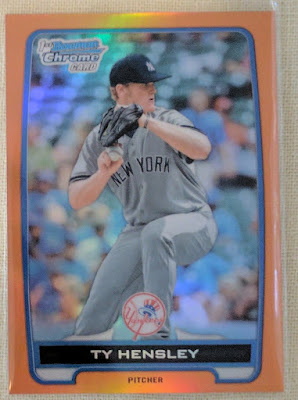 Yep, for just about a buck more, I snagged this Ty Hensley 1st Bowman Chrome Card orange refractor #'d 25/25. Nice looking card! I assume his supercollector, The Lost Collector, already owns one of the other 24 copies of this card in existence (but if not, let me know). Now I'll be rooting for Ty not just because AJ's a buddy, but also now because I want this card to wind up becoming a shrewd pickup for me once he becomes the next Kershaw.

But Hensley has an uphill battle to get back on track with his career, now in the Rays organization. A 1st round pick by the Yankees in 2012, he's been plagued by injuries and hasn't thrown a pitch in a professional game since 2014. That's a lot of downtime!

Which leads us nicely to the final song of the post, which is perhaps my favorite Gandharvas song:


That's going wrap up this post. Thanks for reading (and hopefully giving a listen, too). Have a great weekend, everybody!
Posted by defgav at 3:56 PM