Welp, I'm almost embarrassed to admit it. I should have had patience and waited till the hobby boxes come out in a few weeks and prices drop, but here we are and I've gone ahead and finished the 2018 Topps Archives autograph set for The Sandlot. I know I overpaid for them. But hey, I got a raise at work a few weeks ago, so I justified splurging on these autos and the great pair of Orioles cards I showed off recently. 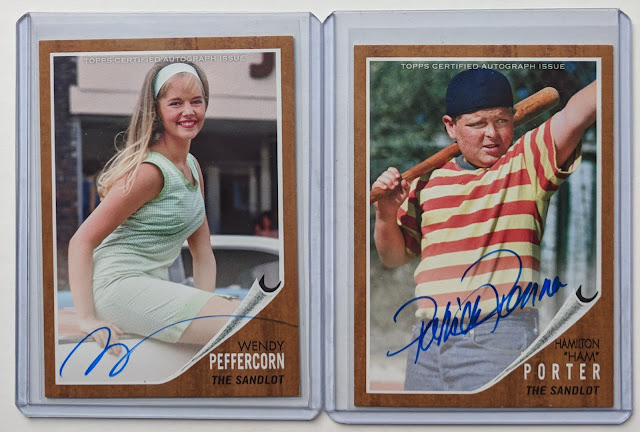 The last two I needed were these heavy hitters, Wendy and The Great Hambino.

Wish Topps would have used a lifeguard photo for Wendy, but this one is fine too. Ha, seems Marley Shelton and Wil Myers have the same lazy signature. But I'll give her a pass because she's a cutie.

Patrick Renna on the other hand has a pleasant, mostly-legible autograph. He seems like a good dude (which is nice considering not all the kids from the film turned out great). I followed him on Twitter recently and have been meaning to check out his podcast, but I'm not much of a podcast guy. 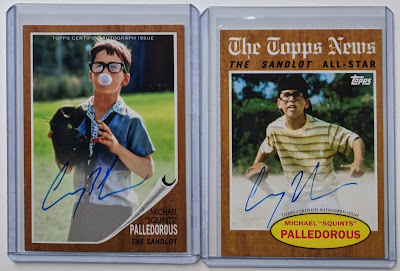 I picked up both Squints autos. The All-Star card comes from when he (Chauncey Leopardi) was signing at the Topps' booth at The National.

Kenny, Bertram, and Yeah-Yeah. Looking good. I knew Kenny (Brandon Adams) was in The Mighty Ducks, but hadn't realized he was also in Michael Jackson's Moonwalker. Pretty cool. 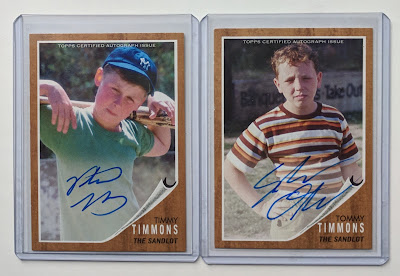 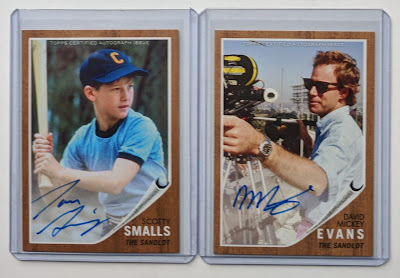 And finally, Scotty Smalls and David Mickey Evans. Evans was the co-writer and director, and also narrated the film.

And that wraps up the autograph set. Mike Vitar (Benny) has a card in the base insert set, but not an autograph, perhaps stemming from his run-in with the law a while back. Grown-up Benny from the end of the movie, Pablo Vitar (Mike's older brother), was also not a possible autograph subject as sadly he died from cancer in 2008. As far as other potential signers, it would have been nice had Topps included the adults in the film: Karen Allen as Mrs. Smalls, Denis Leary as Bill, James Earl Jones as Mr. Mertle, and Art LaFleur as The Babe. You haven't seen the last of The Sandlot on my blog, as I'm currently working on customs for these four, plus I'm still working on collecting all the non-auto inserts and coins from the 2018 Archives.

Thanks for stopping by.
Posted by defgav at 4:28 PM

Email ThisBlogThis!Share to TwitterShare to FacebookShare to Pinterest
Labels: Joy of a Completed Set, Sandlot