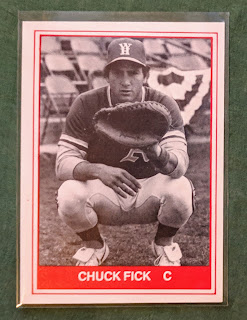 Chuck Fick. You're probably not familiar with his name, but the chances are good you've seen him work behind the plate, perhaps watching his highlights many times. If you're young enough, you might have even watched him in action more than Yogi, Munson, Bench, and elite backstops of their ilk. 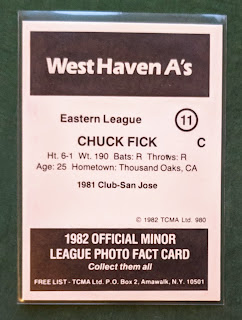 Got this card in my latest COMC shipment. Very happy to add a playing-days card of this catching legend.

If you still haven't placed him, here he is with some contemporaries... 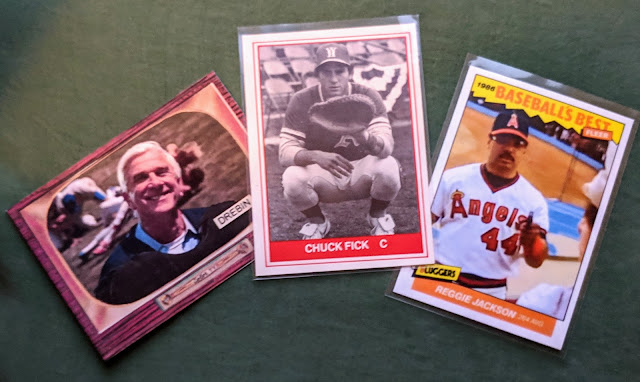 Yep, he's the Angels catcher in The Naked Gun.

I found this out while reading a great Sporting News article on that classic baseball scene earlier in the year.

“I didn’t realize what I was getting into,” said Chuck Fick, a former minor leaguer who played the Angels’ catcher in the film. “I didn’t know it was a slapstick at first, and I started reading the script, and once I saw the umpires got (a player) in a pickle, I knew something was up.”

Fick learned quickly that it was best to just embrace the wackiness. In doing so, he ended up with the most screen time of any player. As the catcher, he was in nearly every shot involving Nielsen as the undercover umpire, including a few close-ups and even some lines of dialogue — a total of more than two minutes overall.


And guess what? Not only was he the catcher in Naked Gun, but also... 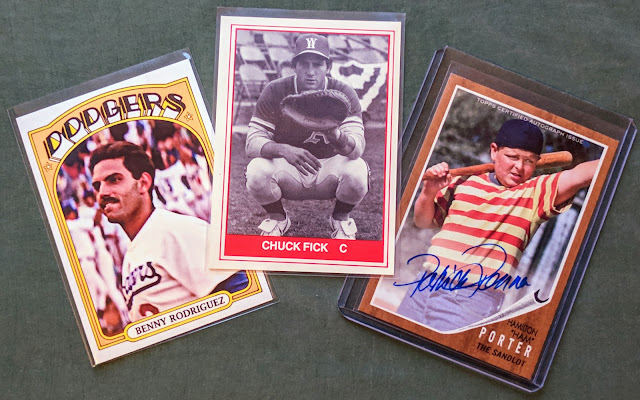 Yep, that's him trying to make the tag at the plate when The Jet steals home at the end of The Sandlot.

So the guy is basically in my favorite two baseball movies. Had to pick up a card of his!

Here are his other acting credits via IMDB..


Other fun facts about Chuck Fick (aka Charles Fick or Charles Joseph Fick):

- He played in the short-lived Senior League (1989-1990), and there are a couple such cards of his out there. (I wouldn't mind adding them to the PC someday.)

- He's the brother of former MLB player Robert Fick, an All-Star with Detroit in 2002.

- He's the father of C.J. Fick (aka Chuckie Fick), who pitched in the majors in 2012 with the Cardinals and Astros.

- He is now the scouting supervisor for the San Francisco Giants.

So yeah, an interesting story of a baseball guy you probably didn't know about!
Posted by defgav at 2:58 PM