How the Grich Stole Black Friday

Just received my big COMC order placed over Black Friday weekend to get the free shipping. The majority of the cards were either vintage set needs (lots of '57s and '64s) or additions for a certain history-themed binder project of mine, but those will wait for another day. 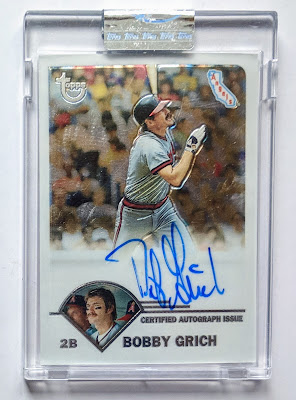 I've mentioned before that I'm always keeping an eye out for Topps Retired autos. The 2004 Retired Bobby Grich auto is super common, with several affordable copies kicking around eBay and COMC at any given moment. But the 2003 Retired version (pictured).. Well, that one comes around much less often.  I snatched this one up quickly when it popped up on eBay via COMC consignment, jumping over to COMC for it, as the prices are often a little cheaper there plus you can save on shipping as opposed to buying the card on eBay. You don't hear a lot about Bobby Grich these days, but he was an elite second baseman in the 70s and early 80s. According to Hall of Stats, he's a slam dunk Hall of Famer, though has thus far been kept out by Cooperstown voters. Happy for this addition to my very long-term goal of eventually maybe completing the 2003 Retired autos. I've got over a third of them now. I've also got about a third of the 2005 Retired autos, and I've completed the 2004 Retired autos (my major collecting accomplishment of 2018.. or really probably my entire time in the hobby). 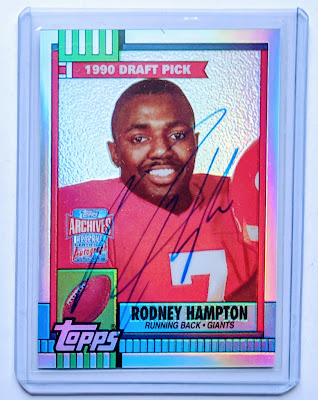 Another project along these lines is my Archives Reserve Master Set (ARMS). I've got the base sets (the two baseball sets and the one football one), and like to pick up an auto or relic from time to time. Here's a name that's familiar to most on the cardsphere, thanks to Matt at Sport Card Collectors supercollecting Rodney Hampton. I keep an eye out for scarce Hampton cards as trade fodder for Matt, and that's probably how I stumbled upon this auto for a good price, but this one's for me. 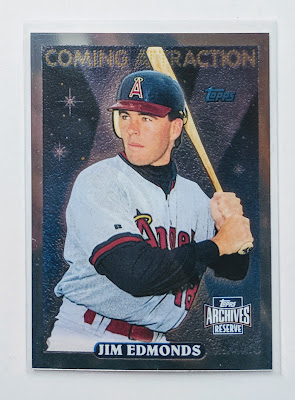 And another card for the ol' ARMS. I'm almost finished with 2001 Topps Archives Reserve Future Rookie Reprints (the only non-hit cards I've got left to chase in my quest). After checking off Jim Edmonds here, I'm down to just needing Bernie Williams and Sammy Sosa, both of which being 1990 Topps reprints. 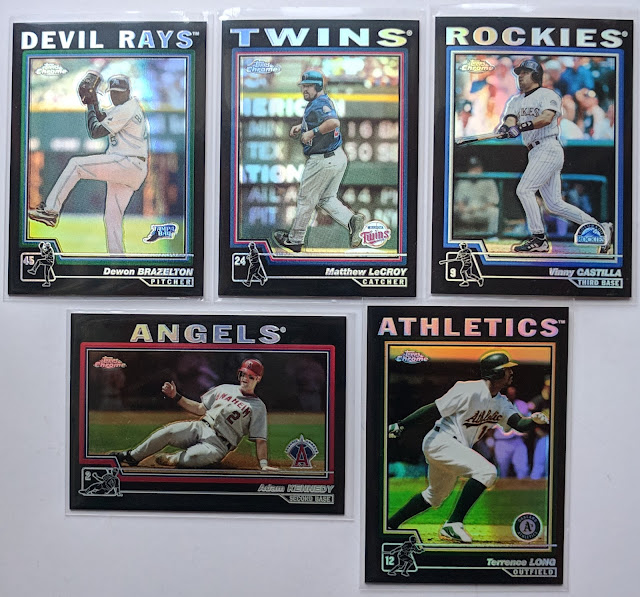 Another long-term goal of mine... I seem to grab at least one or two 2004 Topps Chrome black refractors with each COMC order. I just sort by cheapest-first and try to find any I need for under a buck or so. It's slow going, but I'm nearly to a third complete here, currently at 32%. 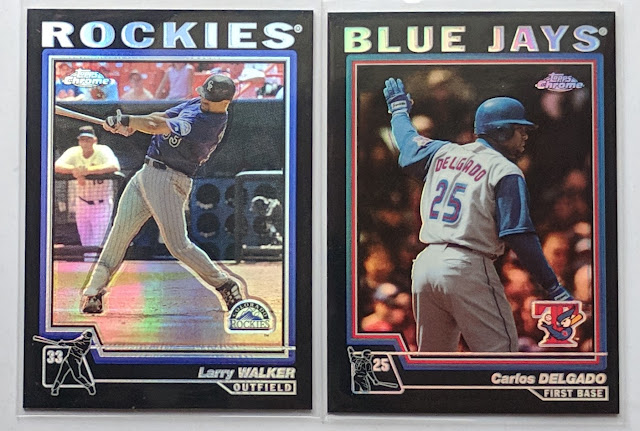 I just love how these cards look, spilling over from my obsession with the similar looking 2004 Topps Retired refractor autos (as seen in my header). The biggest names in this lot were should-be-HOFers Larry Walker and Carlos Delgado. 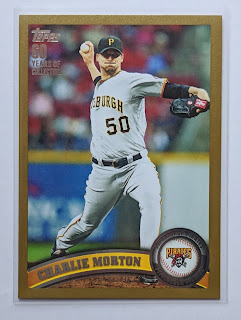 I found myself itching to finalize my order but with 99 cards in my COMC inventory, needing one more to hit the $5 credit that comes with shipping out 100 cards in a month, and so I checked for cheap 2011 Topps parallels-- yet another of my long-term projects (2011 Topps+Chrome parallel frankenset.. still not even to the halfway point with it)-- and landed on Charlie Morton here. He's built himself a solid career, recently signing with the Rays after a very successful stint in Houston.