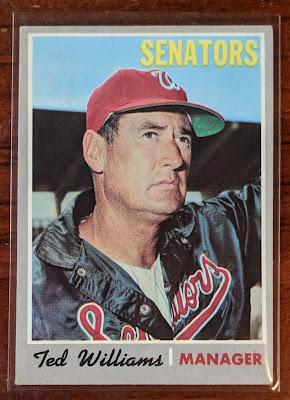 December's Mall 205 card show was on the 1st of the month, which is considerate of them, keeping it as far away from Christmas as possible. It was a good one for me. In a rare move, I turned my pockets inside out and spent every last cent on my person to score one last big card. But we'll save that for later in the post. 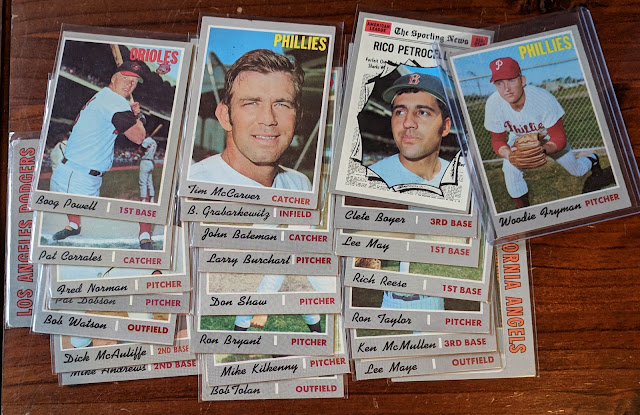 I reluctantly decided recently that I want to try going to go for a full decade run of 70s Topps flagship, and so that means mainly 1970 and 1972 Topps to worry about (I've already completed '71 and '73). I got my foot in the door with this lot of minor stars and mid-numbers (looked for numbers over 400). Most of these were priced at 50¢, though the Woodie Fryman (high-number) and Teddy Ballgame up top were $2 and $4 respectively, but Lyle the dealer gave me a good rounded-down total. 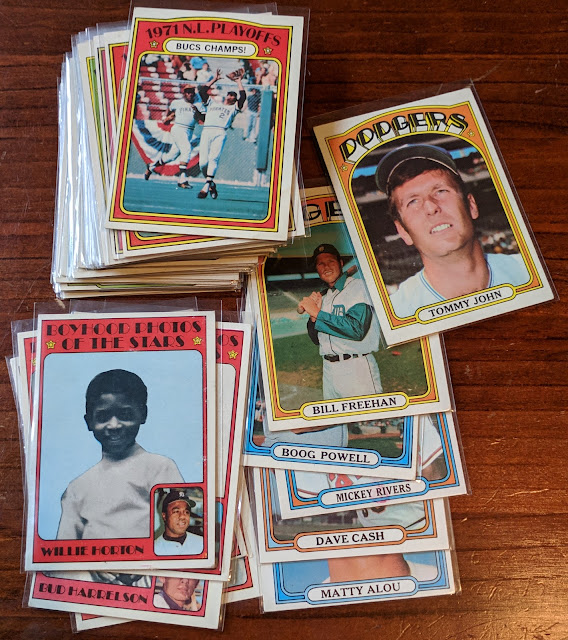 Decent lot of '72s with minor stars and a bunch of mid-numbers, priced at 50¢ each with a few 25¢ too. Hopefully my setbuild will be into double-digits percent-complete after I add these in.

I already had the vast majority of '57s I checked against my list, but ended up with a trio of additions. The two on the right are from the toughest series, always rewarding to knock off. 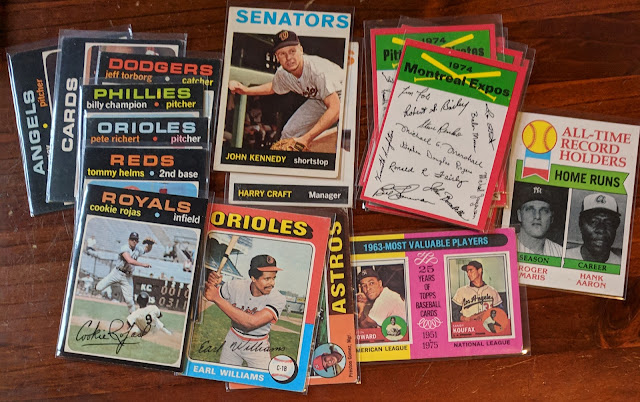 More vintage set needs and upgrades. That Cookie Rojas card sure is a sweet double dip. 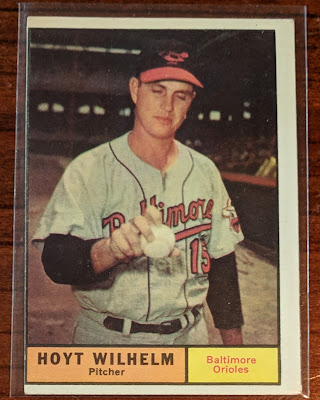 Just call this one Star Wars Episode IV because it's A New Hoyt for my PC! It's offcenter enough to where I wouldn't mind upgrading at some point, but the price was right to snag this '61 from the $4 box along with the '70 Ted Williams. Hell, the cheapest one on COMC right now is $40, so 90% off that price looks like a pretty sweet deal. 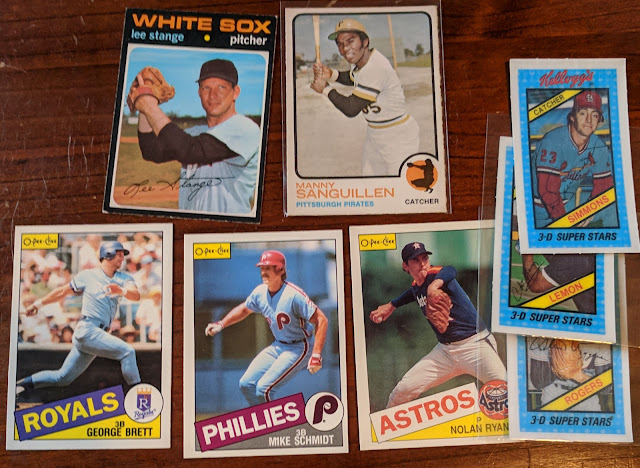 OPC and Kellogg's here, for the heck of it. 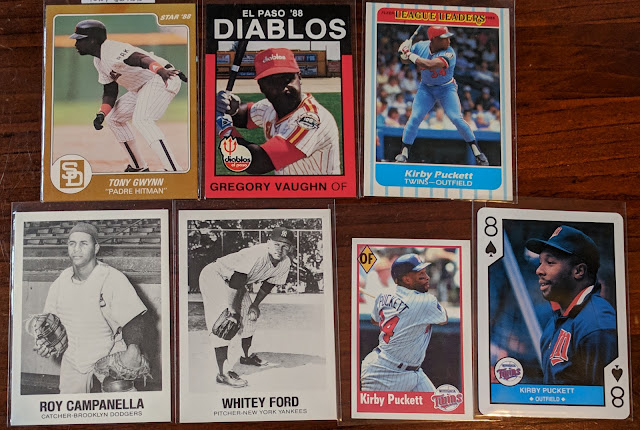 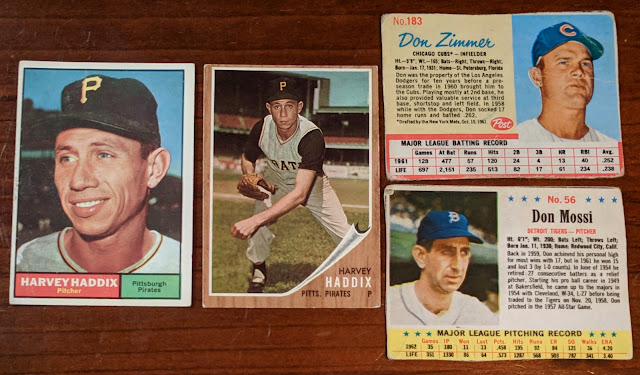 Harvey Haddix is a guy who when I come across while thumbing through "commons" I'll usually throw on my stack. Don Mossi is another classic character along those lines. And the Post Zimmer is a nice addition my PC of The Gerbil.

Lyle is probably the oldest regular dealer at the show, pushing 80 or so. I'm not normally much of a "social" guy when I'm digging for cards, especially with the younger, hit-driven dealers focused on the latest big rookie or whatever, but Lyle is a fun guy to chat with.

During my dig, he was jailbreaking a couple PSA graded Clemente cards out of their cases and was beaming with his results. I congratulated him on his efforts. "I just don't deal with that [graded] stuff," he says. He's old-school and I respect that.

Then he was going through some new stuff he recently scored and found an old b&w postcard from his neighborhood, and it really knocked him on his ass. "These are my family! Not blood-related, but still my family." It was sweet to see the old guy be so moved with finding a random postcard featuring a school football team from his small hometown.

As I was finishing up at his table, he pulled out a slabbed Mantle that was next on the jailbreaking block. But unlike the PSA cards, this one was slabbed by BVG, featuring a thicker case, harder to free a card from than the PSA cases. "Oh well, I've done enough for today. I'll deal with this one another day." And he put it in his case.

When I was done going through his boxes, I gave him the numbers and he worked out the math. I had probably about $75-priced worth of cards by he told me $50 would be good. I happily agreed and reaching for my wallet asked just out of curiosity, "What would you ask for that Mantle? ..to save you the trouble."

In my mind I'd probably be agreeable with $100 or less, even though I knew I didn't have that much on me and might have to scrabble. He looked it up in an old price guide and gave the card a once-over and after a moment said... "$80." I replied I could probably be good with that and dug out all the cash I had on me.. the rest of the money I had set aside for the card show, and anything else that was in my wallet, including my "emergency money" holed away in there. I came up with only $70 (in addition to the $50 already pulled out).. asked it that was ok with him.. and after a brief misunderstanding-- he initially thought I was offering $70 TOTAL for the Mantle plus the other stack of cards I had already picked out-- we shook on the deal. 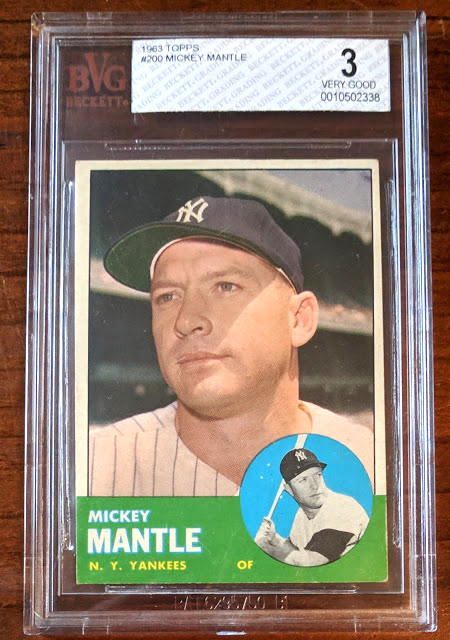 Boom! I haven't added a new vintage Mantle base card to my PC in a few years. This is a very nice add, to be sure. I think this is my 2nd earliest Mick behind a beat-up '57. It's my first graded base card of his (also got a slabbed '65 League Leader). As I always say, I don't concern myself much with the grades, but I do appreciate the peace of mind knowing that the card is authenticated. This card could probably fetch around twice as much on eBay, so I'm pretty happy with the deal. 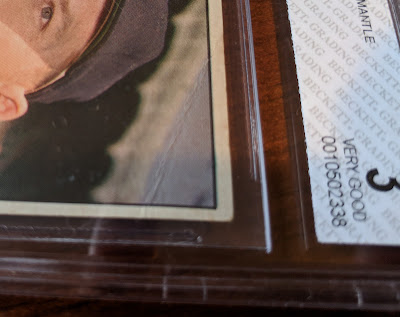 It's in excellent shape with really the only thing I can see keeping it down in "very good" territory is a minor crease in the upper right that serendipitously happens to run along the top of Yankee Stadium. You really couldn't ask for a better crease. 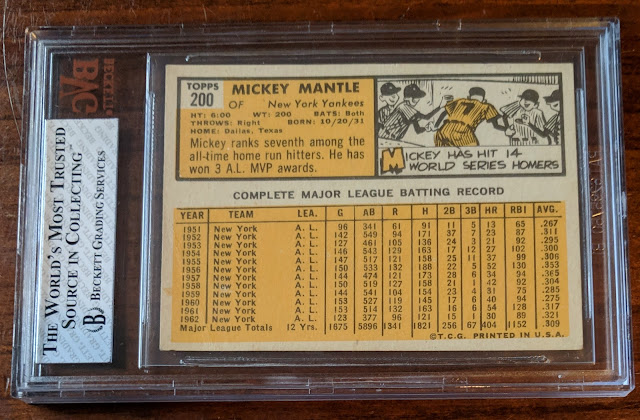 Clean back.
When I returned to the hobby a few years ago, I sort of made a collecting goal for myself to pick up a vintage Mantle each year, with an eventual goal of completing his flagship Topps/Bowman run (though the '52 Topps wouldn't be likely). Well, I've sort of fallen away from that goal, but this pickup helps me take another step forward. I've got a nice 4-year run going here now with 63, 64, 65, and 66. I also have 68 and 69, so hey, that's over half the decade of the 60s down! Maybe I'll finish off the 60s Topps Mantles in a few more years.

Before my big haul at Lyle's table, I also dropped an Andrew Jackson at Bill's bins.

Most of what he had out was football. I stocked up on trade fodder for SCC (bunch of NY Giants) plus some other tradable teams (a few Browns for Angus, though sadly came up short with Redskins for GCA). And hey, that Barry Larkin refractor (1998 Donruss Collections - Prized Collections #PC20) is $11+ on COMC, so was a steal for what I paid for it. Maybe Nachos Grande or Dennis wants to call dibs on it? 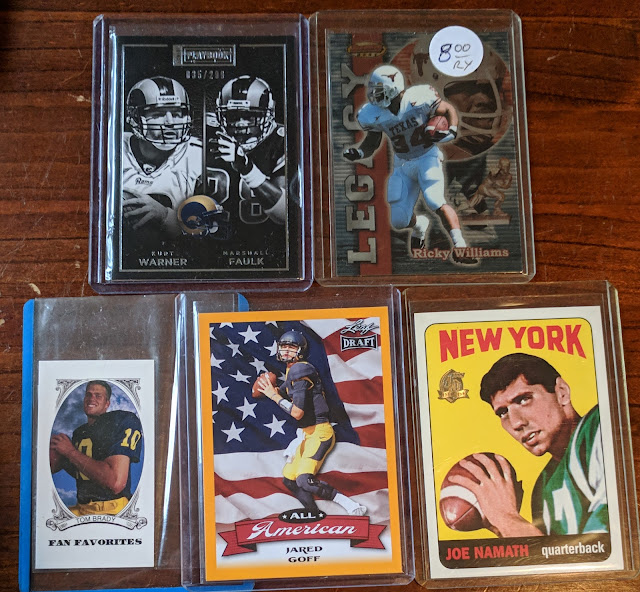 I don't do much football these days, but if that's what's readily available, I'll take a look, and probably end up with a few cards for myself. Here we've got.. numbered Faulk/Warner, Ricky Williams rookie, Tom Brady oddball mini, Goff draft parallel, Namath rookie reprint. 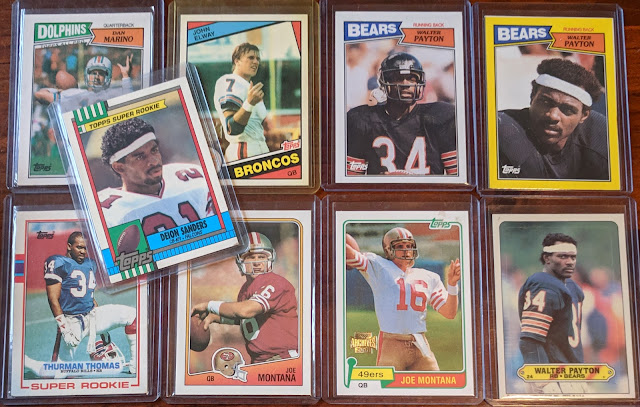 Some older stuff too. Well, the Elway and Montana rookies are 2001 Archives reprints, but the rest are legit. These were 3 for a dollar. 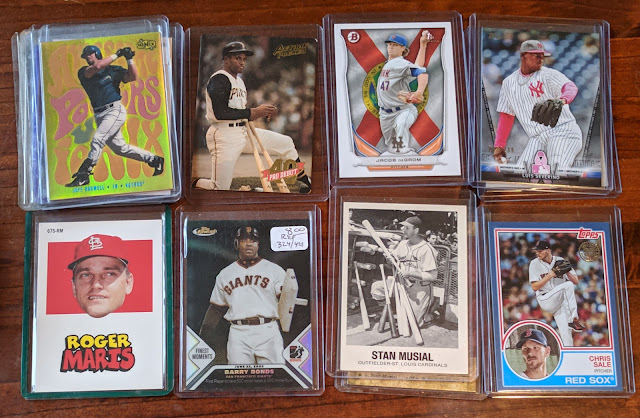 After the vintage haul at Lyle's table, this modern baseball stuff from Bill isn't all that interesting, but still some decent cards here. 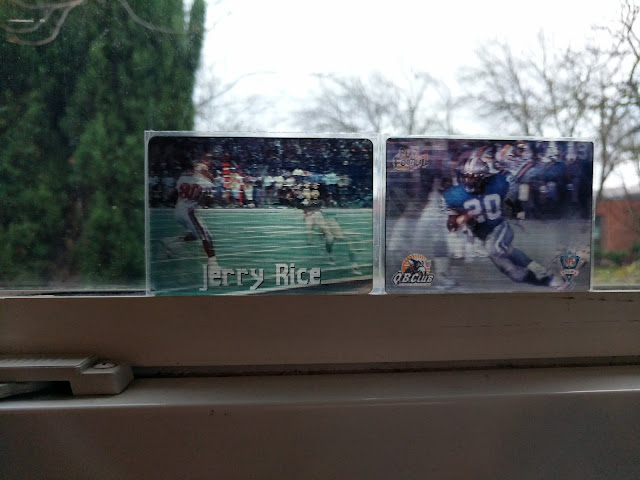 I tried to get a gif of these sweet lenticular Jerry Rice and Barry Sanders cards going buckwild in the window with the light going through them, but I didn't work, sorry to say. (The photo app on my phone has updated and no longer works the same way it once did.) Trust me when I say these things scramble like a piece of plastic possessed. 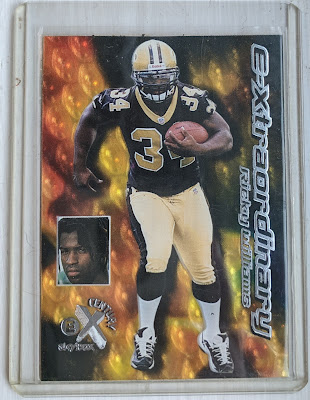 And a final football card that looks awesome in hand, this Ricky Williams card with the cool beaded background that glistens in the light.

That's my haul from the December 2018 card show. I'm pretty happy with it!
Thanks for reading.
Posted by defgav at 1:24 AM