This post isn't crime related, just the next song up on the list of Guns N' Roses songs that I pull from for post titles when I want to show off some random recent cards I've picked up and can't think of a decent title. 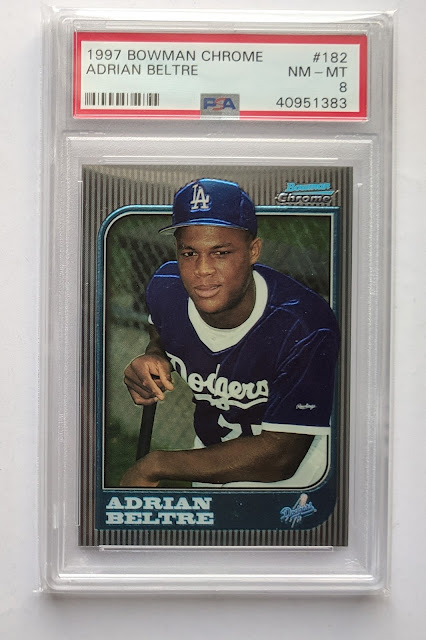 It wasn't exactly a steal (eh? eh? tying it in with the post title), but this slabbed Adrian Beltre rookie was a pretty solid deal and I used an eBay discount code to help me out further. I showed off my Beltre PC a month ago and mentioned the one card I still had a hankerin' for was his 1997 Bowman Chrome card. And so now with this pickup, I'm satisfied and feel like the PC is at peace. (Though a final tribute/sunset card next year with complete [non-truncated] career stats would be nice.) 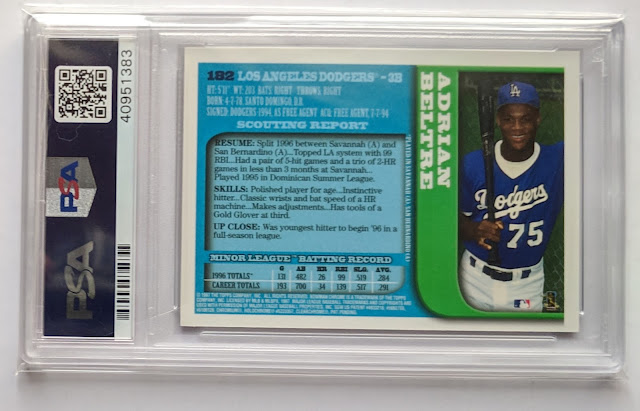 "Has tools of a Gold Glover at third." It's a rare instance where Bowman's hyperbolic write-ups were correct, as Adrian brought home 5 Gold Gloves. 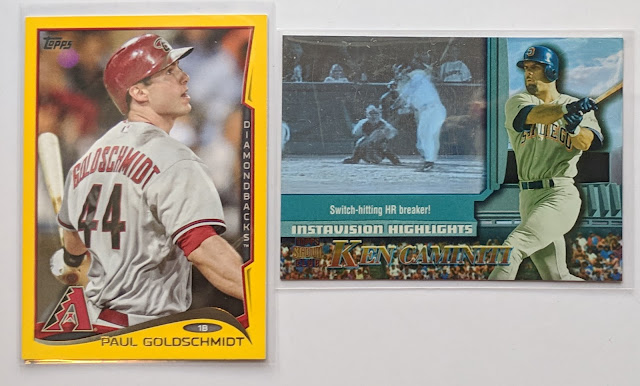 The rest of the cards in this post are more from my latest COMC order. I think I was just looking for cheap Goldy parallels and ran into this yellow one from 2014 Topps retail. Or maybe I was looking for cheap yellow parallels from 2014 Topps retail and ran into this Paul Goldschmidt. Sad to see him leave AZ. He basically left a team I don't like and joined another team I don't like, so that's not a big deal, but I really thought he was the face of the franchise and had a shot at being a rare-these-days one-team career player. That would have been cool. Oh well.

As for the Caminiti, I don't have much cool inserts from the mid/late 90s, and wanted to snag one of the old Instavision inserts from Stadium Club. Pretty cool card from the past days of holograms on baseball cards. 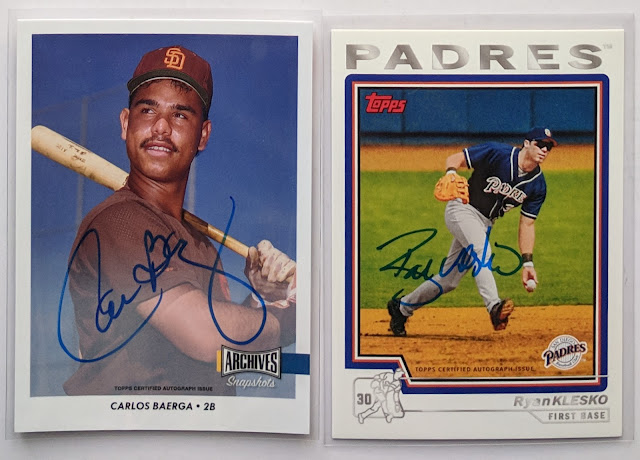 A couple Padres autos. I was a Carlos Baerga fan when he was a hot rookie in the early 90s. Heartbreaking that the Padres delt him away, but kinda cool that all these years later he gets a card in a San Diego uniform.

I think I was looking through cheap autos, looking for anybody I collected, and found the 2016 Topps Archives 65th Anniversary Ryan Klesko auto for just $1.44. 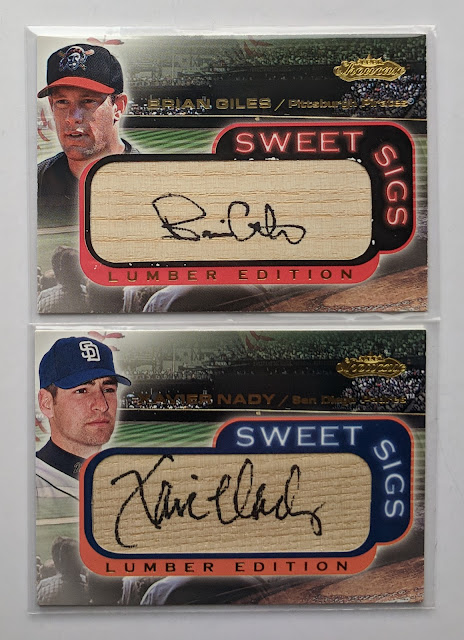 A couple lumber sweet sigs. I actually bought these to destroy them, the Brian Giles one, at least. I want to pull out the signed wood piece and use it in a big custom with the laundry tag from the game-used pants of his I've been cutting up.. so I can make it a big oversized relic/auto box-topper type extravaganza. I might not get around to that anytime soon, but it's on my to-do list. At least the Giles card already shows some damage around the cutout, so it won't hurt me quite so bad to tear it up. I don't think the wood piece is actually from a game-used bat or anything, but it's still cool. Maybe I'll end up doing it "overlay style" so I won't have to actually destroy the card. 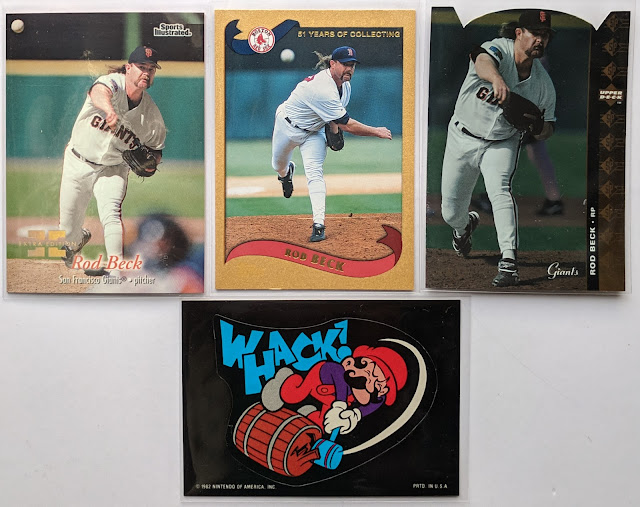 Rod Beck PC additions! One of these days I want to add all my Rod Beck cards to the TCDB and see how far away I am from being his #1 collector on there. The Sports Illustrated card is the Extra Edition and numbered to 500 or something. The 2002 Topps card is a gold parallel #'d /2002. The die-cut is kinda neat. And as for the illustration.. full disclosure, it's not actually Rod Beck, but rather Mario. For whatever reason, I really wanted to snag a 1982 Topps Donkey Kong card (sticker) after seeing one on the blogs a while back, and went with this one. Whack! Last thing for today-- a late addition to the post-- my boss just gifted me this Tony Gwynn figure for Christmas today. What a cool boss, right? This might be my first McFarlane's figure. While I generally tend to stay away from stuff like figures and bobbleheads, this is a big hit with me. My favorite player, plus he's in my favorite uniform (their white/brown/yellow/orange getup from the early 80s)! 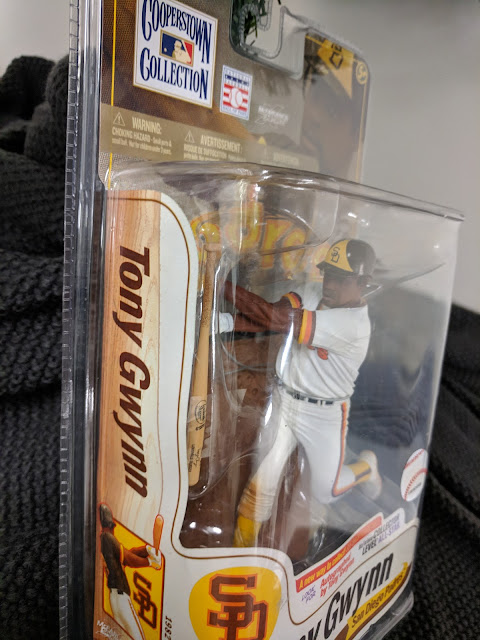 Not exactly a spitting image in the face, but close enough. I'll likely keep this displayed at work.. Probably keep it in the package for now, but might bust it out of there at some point.

For my coworkers, I gave them little magnets of stuff they like (similar to the minis in rip-cards I sent to my trader buds a year or two back), with a cool nickname for our department on 'em (Data Force! lol). Like, one of my coworkers is a big Frank Zappa fan, so I made him a little Frank Zappa magnet. And my boss is a Batman nerd, so I made him a Batman one. They seemed to go over well. That was fun. Now I'm looking forward to a 5-day holiday weekend.

Thanks for reading and have a great weekend. I've gotten in a few nice trades and a contest-win that I need to post about ASAP. And I need to round up some prizes for a contest of my own on the horizon. So that'll keep me busy leading up to Christmas.
Posted by defgav at 3:53 PM