Courtside seats to kill for 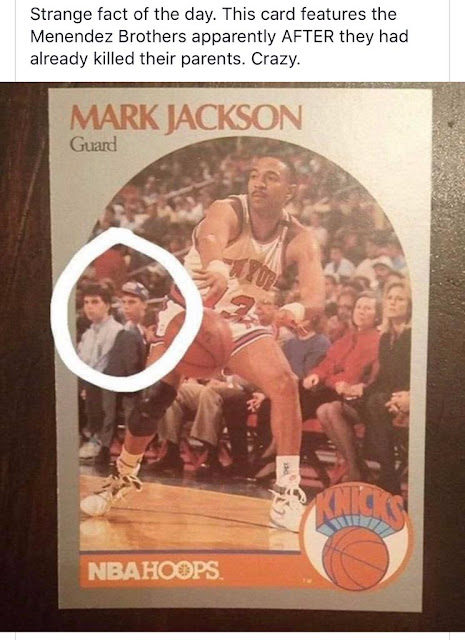 This made the rounds on Twitter this past week, but hey, here's a quick post for those of you not on Twitter. Mark Jackson 1990-91 NBA Hoops #205 features the infamous Menendez Brothers in the crowd. Ever since this has become commonly known, the card is selling very well, like frequently over $10.. even topping $20. It's sold out on COMC. We're talking about a base card of a good but ultimately "non-star" player in a very overproduced set.

As a collector, it's kinda cool to see, even if a bit dark and morbid. I think I had one of these as a kid but long since parted with it. Oh well. (Billy, do you have a dupe for me? LOL)

How cool is it that a dimebox common could suddenly become a desirable card decades later? (I dream of my hoard of 1990 Upper Deck Marquis Grissom rookie cards skyrocketing in value.) Can you think of any other similar examples?
Posted by defgav at 8:22 PM