Good stuff under the tree to recap from Collecting Cutch, Fuji, and Too Many Verlanders. 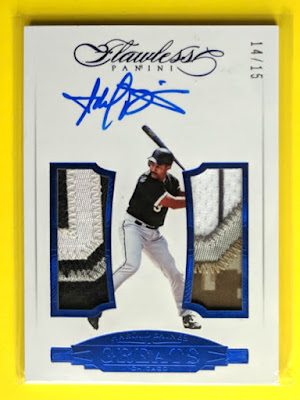 I was thrilled to win this awesome Harold Baines card from Brian the other day. He had a contest post of predicting where Andrew McCutchen would end up. I pulled Philadelphia out of my ass, and wow, a few hours later, it was announced that he did in fact sign with the Phillies!

I've always liked Harold Baines and was pleasantly shocked at the news of his HOF election. This is a great card to ring in the occasion in my card collection. Panini Flawless cards are always classy. No logos, but there's enough going on to where you don't really notice, between the two impressive patch bits and his crazy autograph. Harold doesn't have the most visually appealing signature, but still much better than a lazy squiggle. The low serial number is a nice feature, too. 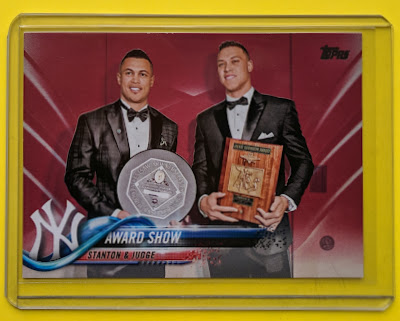 And I won this pink parallel in Brian's wonderful Save The Boobies event back in October. Victory was mine in this instance thanks to my lucky pick back in September that J.D. Martinez would hit the first double of the 2018 World Series. Sure enough that prophecy was fulfilled a month later in Game 1! For my nostradamus-like abilities, I scored this Giancarlo Stanton / Aaron Judge "award show" checklist from Series Two #'d 42/50. I collect both these guys, though I'll likely throw this in the Judge PC since I already have well over 100 Giancarlo cards and I'm still getting there with Judge.

Always down for bonus Cutch cards thrown in for the ride. But the real surprise punch of the package was this Adrian Beltre bat relic #'d 60/99. Heck of an addition to the ol' Beltre PC.

Thanks for the contests and the bonuses, Brian! Very generous of you.

Next up is Fuji. I figured we were square, but somehow I was still on his "hit list", and hey, I'm not going to object to receiving cards in the mail. 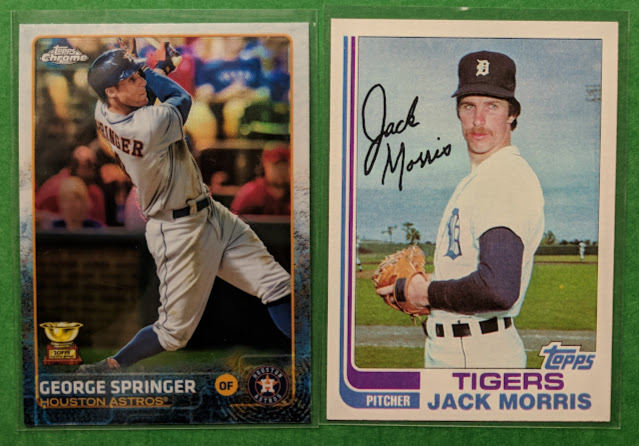 The 2015 Chrome George Springer is a refractor.. nice! And Fuji was just a little late on getting me that '82 Jack Morris I needed for my set, beaten to the punch by Turrdog, but still appreciated. The meat of the package was this pair of Mad Dog Madlock relic cards.

Lastly, Dennis from Too Many Verlanders graciously included me in his blast of holiday mailings. Kicking off with a neat pair of blue Gavins.

Some Pads from the Past I collect, Gwynn Jr, Nevin, and a golden Giles. 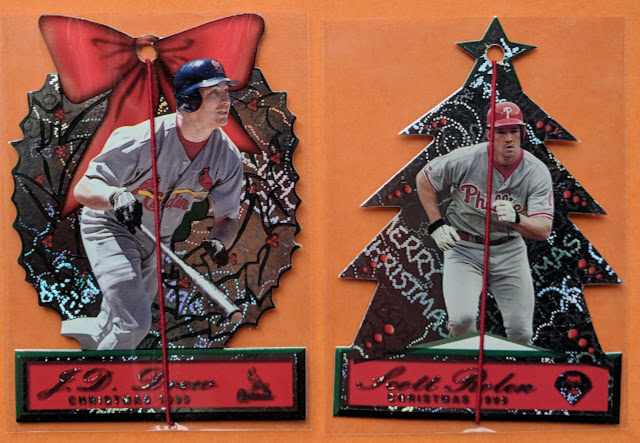 Wow, now this is a Christmas package. These ornament cards from Pacific are a blast. 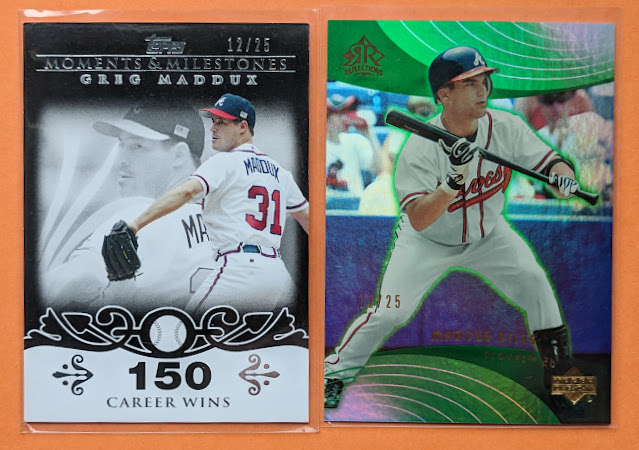 But the "Christmas Cards" that really get my attention are 12/25 cards. I'm always happy to land a card of any player with that yuletide numbering.. but a guy I collect? That's a bullseye for my collection! HOFer Greg Maddux and Guy From Granite Marcus Giles, both top tier dudes I collect. 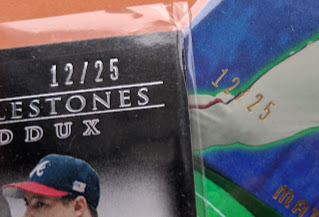 Big thanks, Dennis! I'll hit you back with a return soon.

And Happy Holidays, all. Thanks for swinging by.
Posted by defgav at 4:48 PM