While I should probably be focusing on the few sets I'm close to completing, I gave into the siren song of 1972 Topps recently, going after a couple separate auctions for starter lots as I try to get that setbuild into gear. Each lot ran me 30-something bucks and each included a bit over 100 cards, but otherwise they were different beasts and complemented each other nicely. 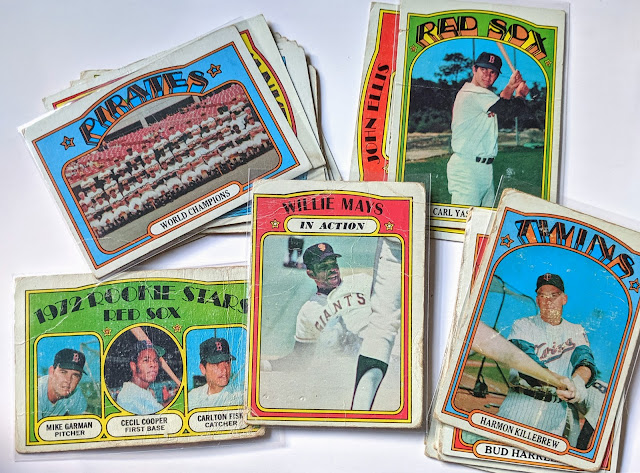 The first lot included a lot of big names, even the Fisk rookie(!), but with cards that were in poor condition for the most part. 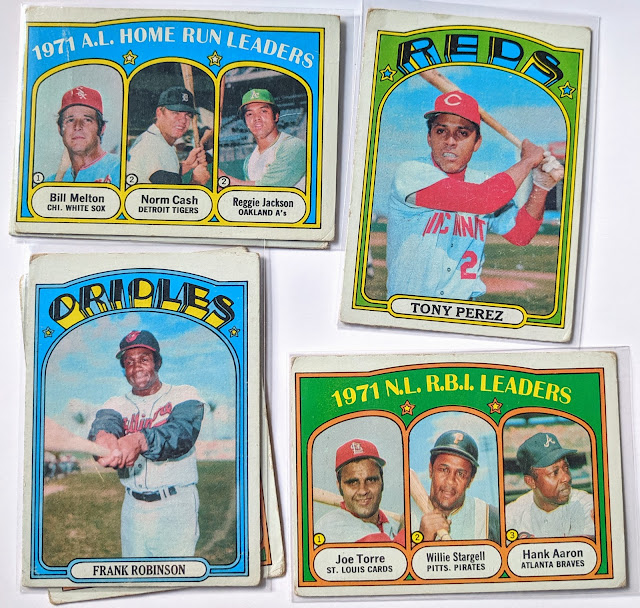 I was expecting a few stars, but the lot exceeded my expectations. 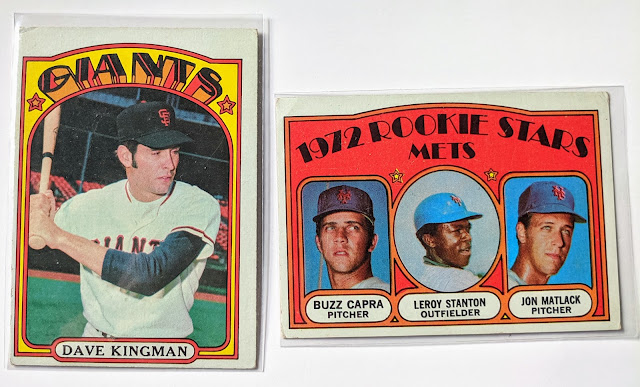 And some of the cards were in good enough condition to the point that I probably won't bother trying to upgrade them. 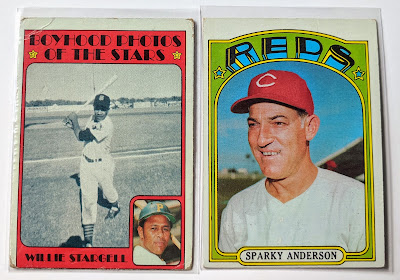 John Mayberry was probably the worst off of the bunch, with even a smiley face stamp adding to the indignity. Bench looks good from the front, but has big initials in marker on the back. I already have a nice Reggie in the PC, so this creased specimen will probably suffice for my set, though I wouldn't turn down an upgrade someday. 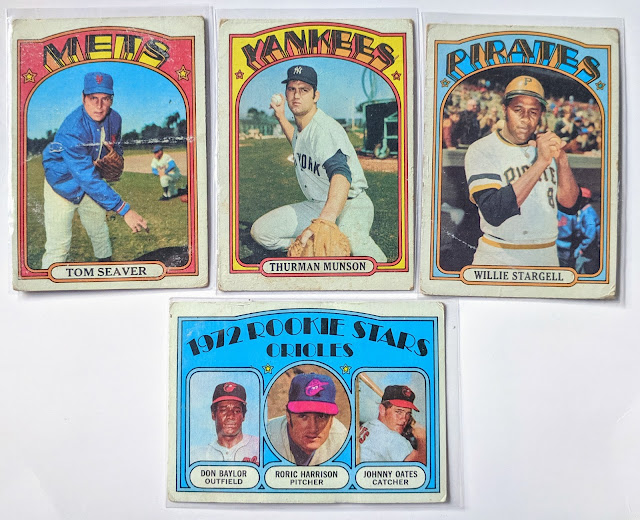 I'll probably take a similar approach that I did when I completed '71 Topps a while back, which is to take any condition I can, and hope to upgrade the bad ones later over the years-- A big reason I love using my own Google Docs for checklists is I can mark a card "got it!" or "upgrade would be nice" so if I get the card, I can check it off but still leave the door open to upgrading someday-- and if not, oh well, I'd be content just having a complete set regardless if it'd be considered NM. Not like I plan to sell it ever. 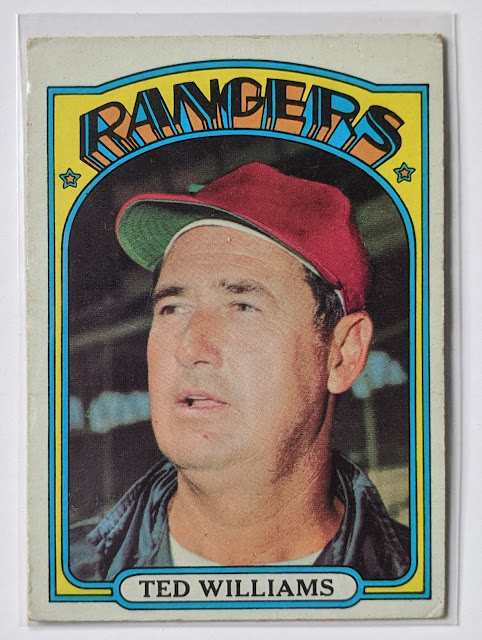 Here's a card that made me blurt out "h*ly shit!" when I was sorting out the cards. Was not expecting to come across Ted freakin' Williams. It's the final "active in baseball" card from his career, and it's in good shape, too, compared to most of the other cards in the lot. 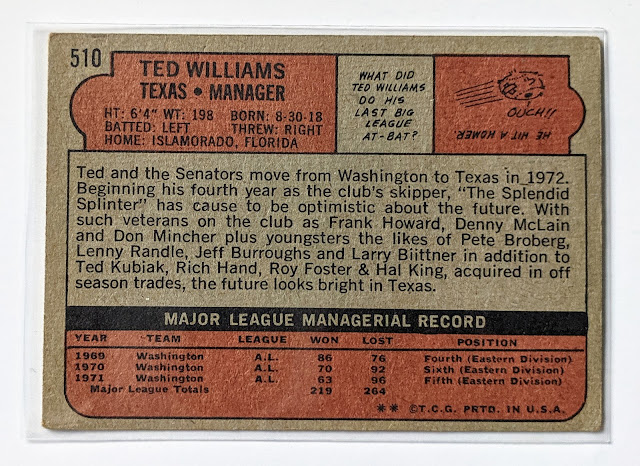 I'm so excited that I also have to show the back, which also looks good other than some wonderfully authentic corners. 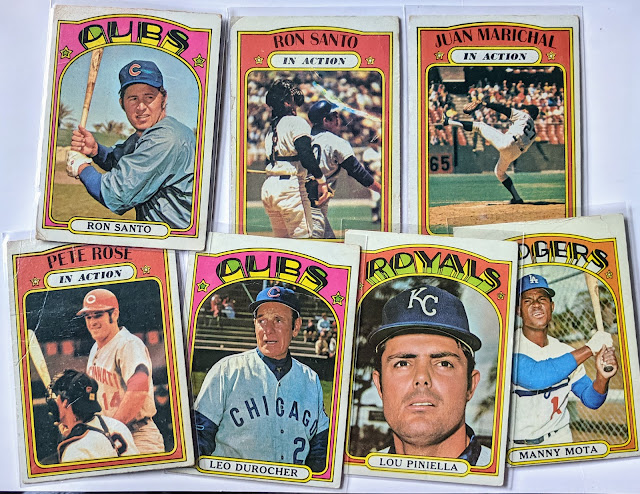 Closing out the highlights from Lot #1 are a bunch of semi-high numbers (i.e. 5th Series). I previously had only one single card checked off from the series, so I was very happy to be able to make some progress there, especially with several well-known names.

I still have ZERO cards from the brutal 6th Series (unless I pluck Hoyt Wilhelm out of that player collection), which is part of the reason why I decided to forgo worrying about condition with my '72 setbuild and embrace creases and fuzzy corners. Those high-numbers will be tricky enough to acquire, period, even without having to worry about finding them in near-mint condition.

Anywho, this lot got me to 200 cards and a quarter of the way to complete. Lots of big names checked off.. definitely happy with the purchase. 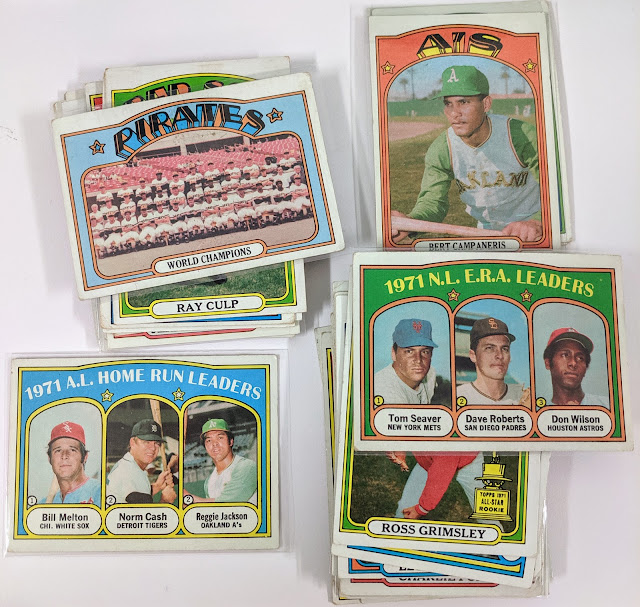 The second lot arrived a few days later and included a few cards that were upgrades over what I got in the first lot, such as the Pirates team card (#1 in the set thanks to their championship the prior year). In contrast to the first lot, this bunch was mostly commons, with big names being few and far between-- the only HOF players included were Mr. October and Tom Terrific on these League Leaders-- but in better condition for the most part. Happily, there wasn't too much overlap with lot #1 or the cards already in my initial setbuild. 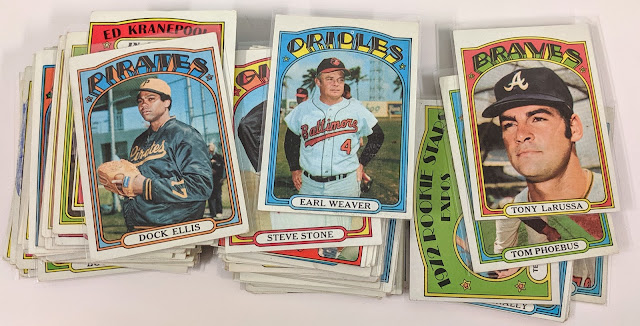 And there were a couple more HOFers in the form of managers, with Earl Weaver and Tony LaRussa.

This 2nd lot got me past the 1/3 complete milestone (all the way to 37.36%, actually). So now I feel like I've got a solid foothold with this set, though I know it'll be tough, especially that nasty final series. If you've got any '72s available to trade-- again, in ANY condition!!-- please take a look at my needs and let's see if we can work out a deal. Thanks!
Posted by defgav at 4:13 PM

Email ThisBlogThis!Share to TwitterShare to FacebookShare to Pinterest
Labels: 1972 Topps