old stuff from the card show

More card show pickups from this past weekend. My first purchase of the day was 77 various cards from Bill's 7-for-$5 bins, which is where most of the cards in today's post are from-- I'm breaking my haul up into the older cards first, then I'll do another post or two soon with more recent stuff. Perhaps the card I was most excited to find in the ol' 71.4 cent boxes was this 1969/2018 Richie Allen. I'm not really big on buybacks, but love snagging a "new" Dick Allen card when I can. Gotta admit this one looks pretty good with that big golden stamp. 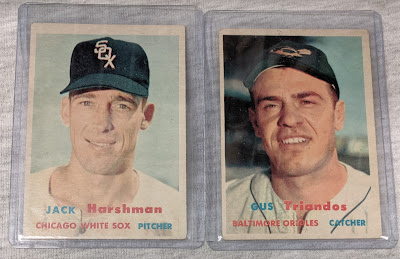 There was a little deposit of like 7 or 8 cards from 1957 that I was anxious to check against my spreadsheet. Sadly, I already had them all, but these two were previously marked as wanting upgrade, and this pair fit the bill. (Sorry for the glare.) As I was updating my spreadsheet, I thought it was kinda funny to notice that I originally bought the Gus Triandos card last year, at the 6/9/18 card show, while I upgraded it almost exactly a year later, at the 6/8/19 card show. 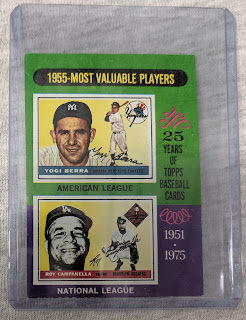 I'm not working on the mini set of 1975 Topps, and I don't particularly PC either of these guys, but couldn't pass it up. 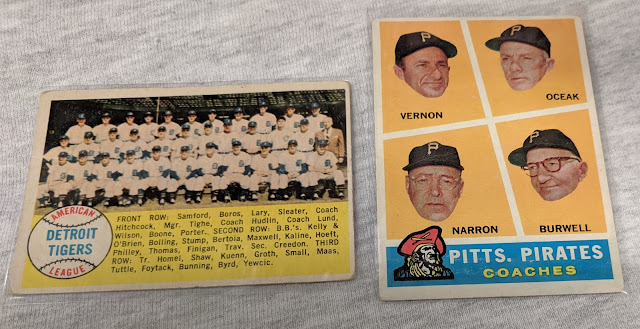 I'm at the point in my card collecting career where I can typically identify the year of major/flagship releases based on the design without having to think about it. But team cards and coaches cards like these two can stump me. I'm gonna guess the Tigers is '58 and Pirates is '61.
[...looks them up...]

Wow, I was a year off on the coaches (it's 1960), but the real story here... I was right about the Tigers checklist, but not only that, this is a 6th series checklist variation with the cheapest similarly unchecked back card being $38.25 on COMC. Nice score on my part! If anyone is working on a '58 set / team set, it's available for trade offers. 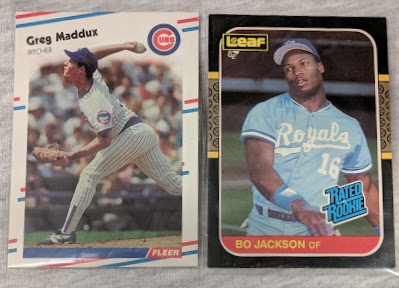 Now we jump to the late 80s for a pair of very familiar yet "new to me" cards. The Greg Maddux is glossy, while the Bo is obviously Canadian. 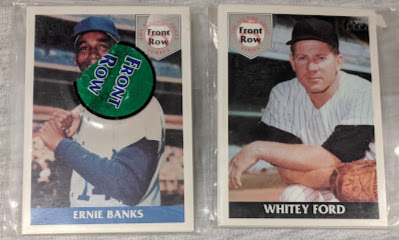 Bill counts little sets like this as "one card", so not bad for the price though I probably didn't really need to buy either of these 5-card Front Row sets from 1992.

COA! I'm a sucker for a serial number.

Ok, this last card coming up wasn't from the $5/7 bins, but rather from a dealer named Terry I don't typically shop from very often, but decided to brave a look at his '57 Topps commons. I try to keep my '57 commons down around the $1 range rather than pay more for better condition, and as such, there wasn't much catching my eye when I'd turn over each card and see the price tag on the back. Before I gave up, I skipped to around the tough 4th series numbers-- since if I was gonna be paying a few bucks for a non-star player, it had better at least be a high number. 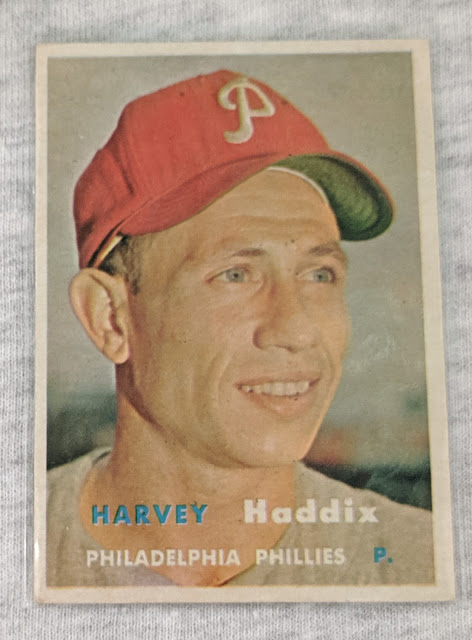 Here we go. Collector favorite Harvey Haddix is the first card in the tricky 4th series. At $6, I thought the price was fair enough, though nothing to click my heels over. Glad I didn't have to leave the table empty-handed.

It was the most expensive card I bought myself at the show, though I did spend more on a card with Fuji in mind that I hope to use to lure him into a meetup next time he's in Portland. I wasn't intending to search out anything for him, but came across a couple cards that I thought would be a "double bullseye" for his collection.