Sort of adding a Harry Shearer auto to my Simpsons collection

I bought a lot of CDs back in the 90s and built up a big music collection. But as the millenium dawned, I was picking up less and less CDs, gravitating more towards mp3s, and later towards streaming. I've probably only bought 3 or 4 CDs in the past decade.

--Or at least up until just recently when I picked up a few autographs from Newbury Comics, who run a lot of promos direct with the artists-- basically, when you buy a CD, you get a bonus signed item from the band-- so I consider these essentially "certified autographs" since they're from a known legit source, not picked up on the secondary market. The prices on these offers are decent-- basically what I remember paying for a new CD back in the day, mostly around $15-- so I picked up a few (enough to qualify for free shipping). Here's the first one I wanted to show off... Derek Smalls is a fictional character who plays bass for the fictional band Spinal Tap. While I think This is Spinal Tap is a classic film, what really made me jump at this was the fact that Derek Smalls is Harry Shearer, and I thought it'd be cool to add to my very small collection of The Simpsons related autographs. Harry of course is the voice of Mr. Burns, Waylon Smithers, Principal Skinner, Ned Flanders, Reverend Lovejoy, Kent Brockman, Dr. Hibbert, Lenny, Otto, Rainier Wolfcastle, Scratchy, Kang, the Vin Scully-inspired baseball broadcaster, and more.

As you can see, it's signed in character (as Derek Smalls), but it's still an authentic autograph from Harry Shearer-- close enough for me! This autographed sheet came with a sealed CD of Derek Smalls' new solo album, Smalls Change (Meditations Upon Ageing)... 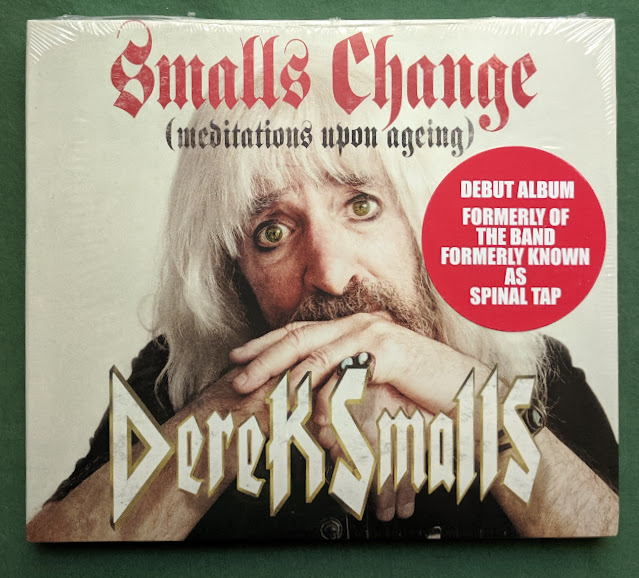 I gave it a listen and it's pretty good. If you like the music of Spinal Tap, well obviously this is in that same vane.. hard rock songs with cheeky lyrics. 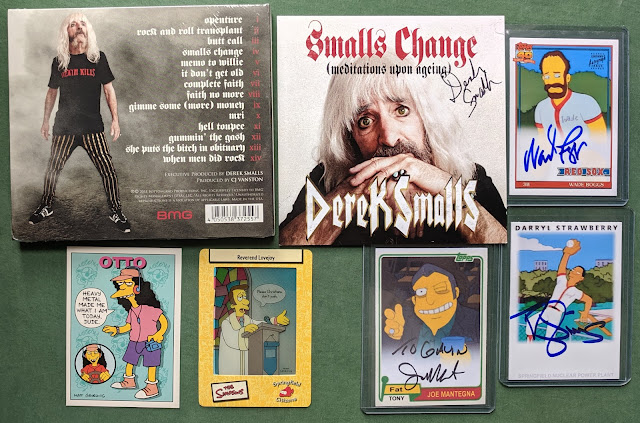 Again, not exactly Simpsons, but I'll happily take it and shoehorn it into that part of my collection.
Posted by defgav at 3:21 PM