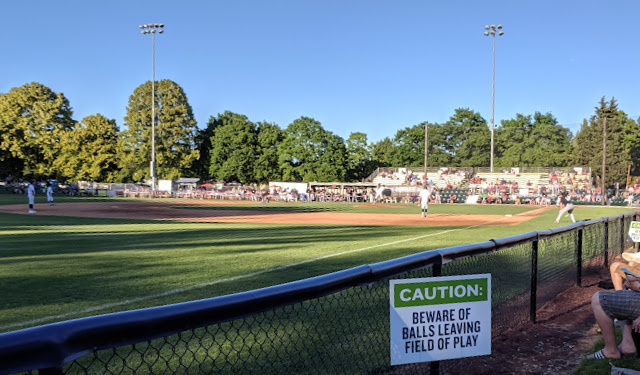 I caught my first live baseball game of the year yesterday. The Portland Pickles are a collegiate woodbat team. It's always a fun time at the ballpark, with atmosphere similar to a minor league game. It was a hot one, in the upper 90s, but there was plenty of shade. 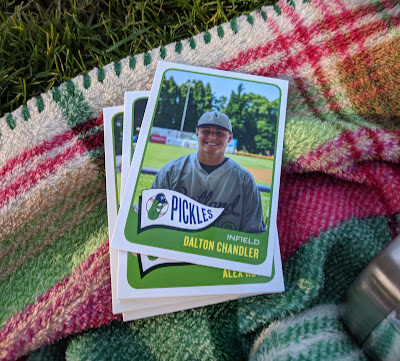 What made me want to go to this particular game was the fact they were giving away a team set of baseball cards. The team has been around for 4 years, but this is apparently the first time they've had official baseball cards produced. The website said first 700 fans get the set, but a tweet from them said first 500 fans. So I'm not exactly sure what the print run was on these, but I guess around 500-700. Didn't seem like there were much more than 500 fans in the stadium for the game, but I was just a little too late and they weren't giving them out when I arrived. But I asked a guy working the gate about it, and he graciously pulled a set out of his pocket for me and told me it was my lucky day, so crisis averted! 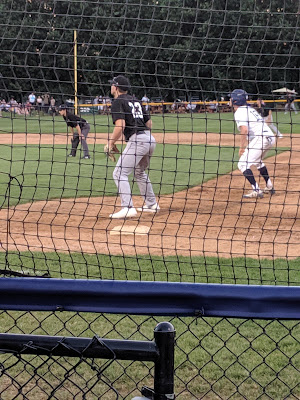 I met up with my wife at the gate (she ran a bit late getting out of the house, while I went straight from work) and found a nice spot near a friend of hers also at the game. Well, it was nice for an inning or so until a talkative group of women (including one who looked very much like Drew Carey in drag) sat on one side of us, and then a group with like 5 or 6 small children sat on the other side of us. Could have done without all the extra noise and distraction, but hey, that's live baseball for ya. I took a walk around the stadium mid-game to escape and stretch my legs-- and also to see if I could find an unwanted extra card set somewhere (hey, we bought two tickets, only fair). I did witness a heartwarming exchange where an older guy gave 4 sets to a younger father for him to give to the kids he was supervising. The dude and the kids were very appreciative; it was sweet. Then I made my way over to a table by the gate to grab a pocket schedule and roster sheet, and noticed they had a couple card sets on the table, so I happily grabbed one. 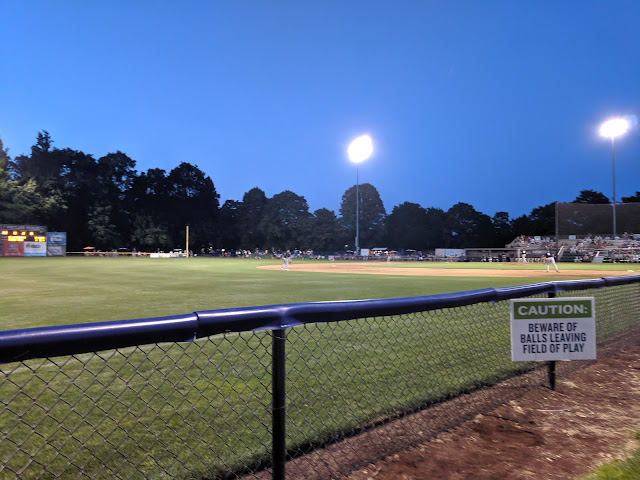 The game was fine, though the good guys couldn't really get it going. The hometown Pickles lost to the Ridgefield Raptors 3-1. We ended up leaving a little early to catch the Max back home. 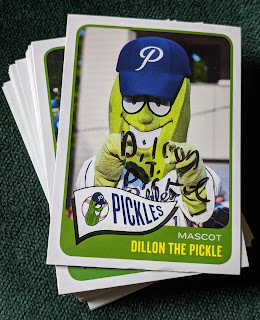 Turns out the second set I grabbed included a card autographed by Dillon the mascot.. cool! Apparently before the game, 4 players and Dillon were signing. Turns out this 2nd set was missing card #23 (Gabe Skoro), but oh well. 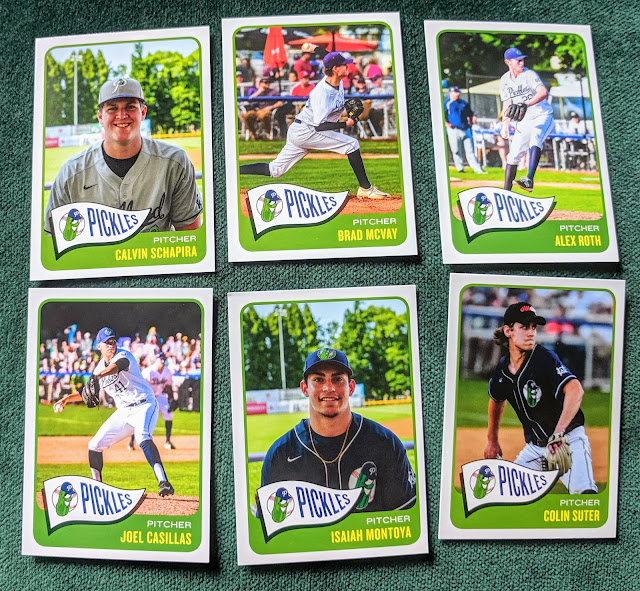 Here's a look at some of the cards, a mix of action shots and posed headshots. As you can see, the design is closely based on 1965 Topps. Hey, that's among my all-time favorite designs, so I'm a fan of that choice. 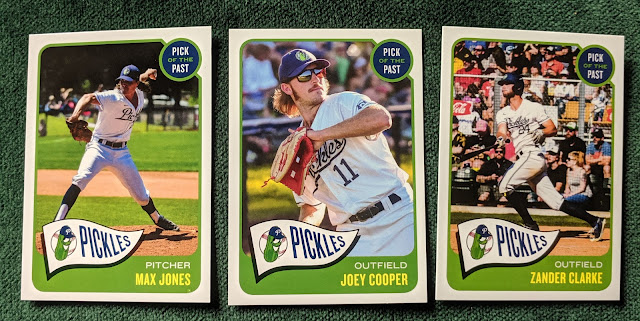 Most of the cards are current Pickles, though there are also 3 "Pick of the Past" fan favorites included. 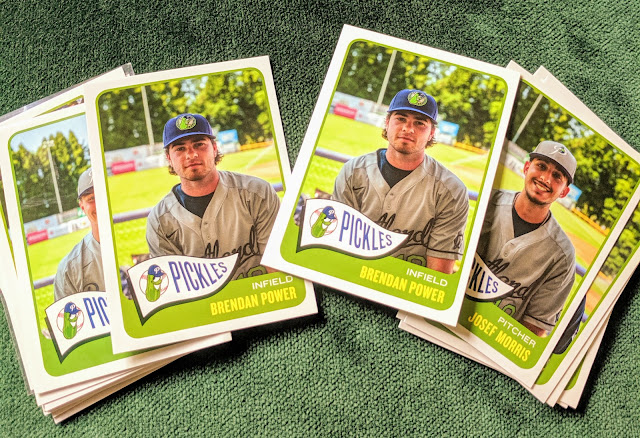 An oddity about the 31-card set is there is no card #16, yet there are two of the same #18 (Brendan Power). Both my sets were like this, and Padrographs Rod confirmed his set was like that too. Must have been a blunder at the printshop. I wonder if #16 is out there in limited quantities.. a modern day Honus Wagner. LOL. 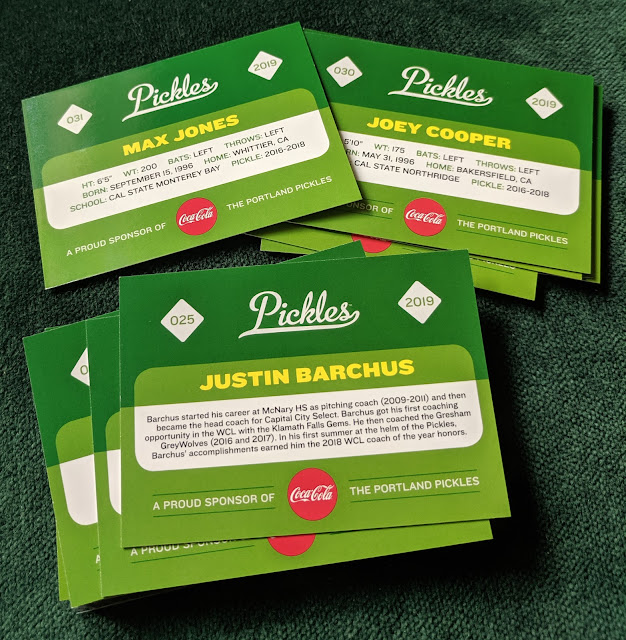 Here's a look at the backs. Players have vital stats while the coaching staff each get a write-up. 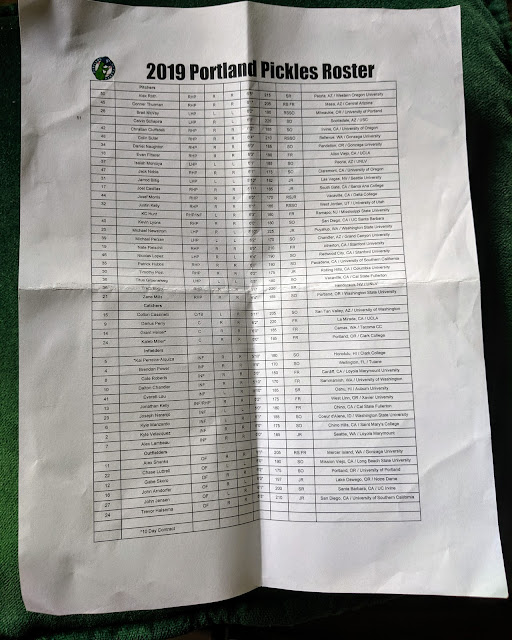 Here's the full roster, though by the size of it, I'm sure they're not all active for every game. I'll have to take a look in a few years to see if any of these guys make a name for themselves in the game. Would be cool if one of these guys went on to become a Major League star someday, though the odds must be tough. 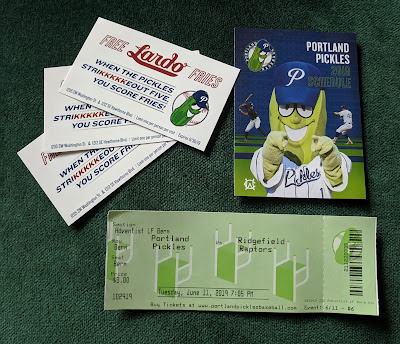 It's always funny/awkward for people who aren't really baseball fans when there's "KKK" on the outfield fence signifying there have been 3 strikeouts. No, the Klan is not a sponsor, lol. There were 3 strikeouts for an uncomfortable length of time, but thankfully more came eventually. The Pickles struck out 5+ guys so everybody got a coupon for free fries at a local restaurant. We've been there several times (used to live very close to it) and they've got tasty food, so we will likely put these to good use.

Wrapping up, it was a fun evening at the ballpark. I hope to catch another Pickles game or two before the season's over.. maybe even get some of these cards autographed (I intended to get 2 sets so I could try getting one signed, and keep the other set as-is). And if they make another card set next year, I'll definitely do my best to catch that game as well.
Thanks for reading.
Posted by defgav at 12:43 PM