Prospecting from my childhood

I recently stumbled upon some draft pick / minor league sets from my childhood collection that were boxed away. Let's check 'em out. 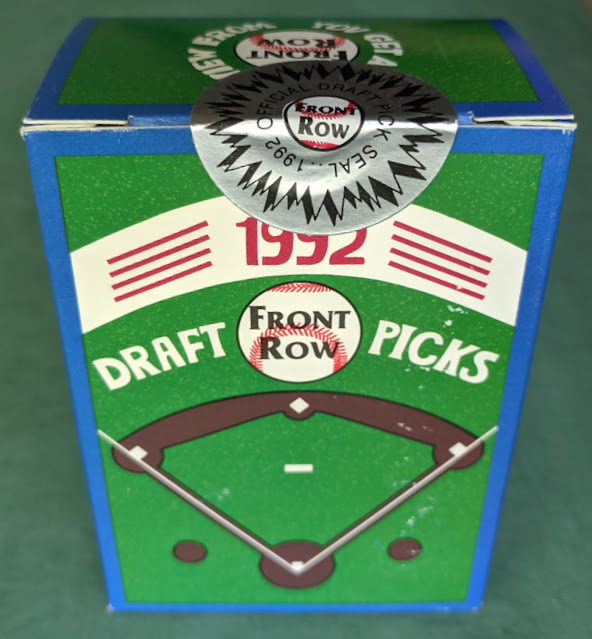 It's draft day, so let's go back 27 years to the 1992 draft. Looks like I've kept this box sealed the whole time, but I wouldn't put it past younger me to slyly try keeping the sticker seal intact while peeling it back.. just trying to sneak a peek at the cards before resealing. 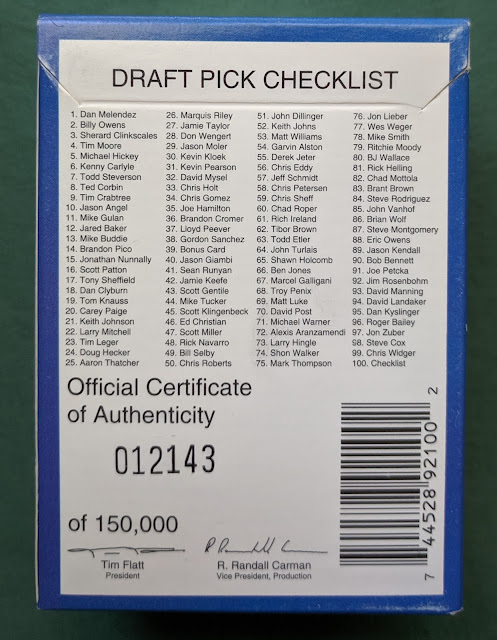 The big name here is Derek Jeter. That's pretty much it. There's also Jason Giambi. Jason Kendall is another familiar name. Eric Owens is a fan favorite of mine, though I think I've already got that card in the PC.

Bonus Card (#39) is a send-in offer for another card of a '92 top ten draft pick, though it doesn't specify who, and TCDB doesn't seem to have the possible redemptions listed. Perhaps you just got one of the silver or gold parallels.. I'm not sure. There are apparently also autographs, though I'm not sure how they were distributed. Sure would be nice if there was a randomly inserted Jeter auto hiding in my box, but I wouldn't bet on it.

I just looked at the completed listings on eBay, and was a little surprised these sealed sets seem to sell for around $25-30 these days-- more than I was expecting. Not sure how much of my allowance I spent on this set back in 1992, but it was most likely less than $25-- or at least in that ballpark-- so I'll consider this a wash as an investment, but that's alright as far as overproduction era cards go.

And a PSA 10 specimen of the Jeter sold for $200 back in April. So I suppose if you can buy a sealed box for $25 and turn around and get the Jeter graded, you could make a tidy profit assuming it grades out to a 10.

But I don't mess with getting cards graded. There's apparently a big stink going on in that part of the hobby the past week or two with it being revealed that big eBay seller PWCC allegedly worked with a dude who would trim/alter cards so they would grade higher, with PSA also possibly being in on it in the allegations. So that could get ugly. I've never been one to hunt down PSA 10s, so it's not as big of a deal to me than it is to guys out there spending thousands on big cards.

Anyways, on with the sets. 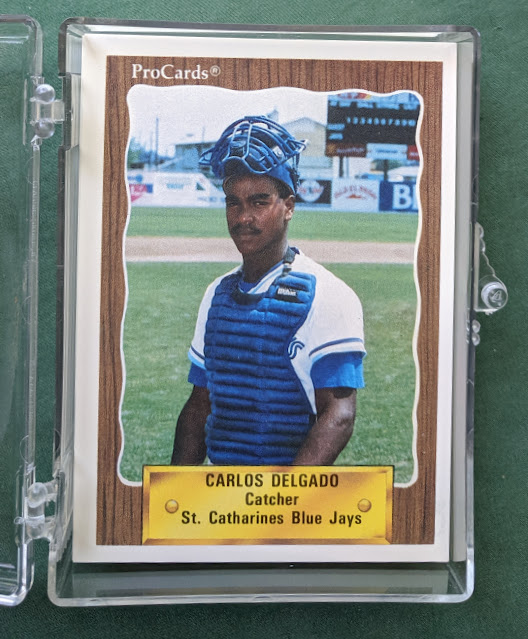 I loved minor league team sets as a kid. I guess I was kinda prospecting-- trying to get in on the ground floor of a future star. But it wasn't about the money, as I never had any intentions to sell my cards.

I had a handful of mid 80s TCMA minor league sets, including one I remember with Danny Jackson and another with Kal Daniels. These instances definitely weren't prospecting, as they were already established major leaguers at that point. Their careers petered off after I ponied up for their minor league sets at the LCS, and I lost interest in those guys, so the sets were among the cards I purged when I moved out of San Diego over a decade ago. 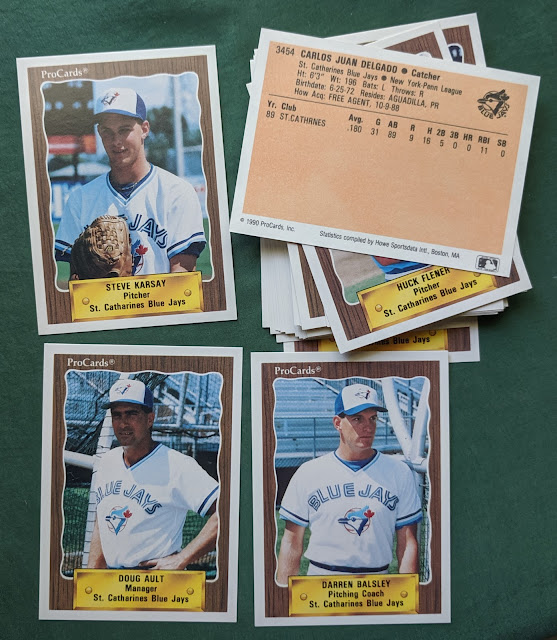 But among the very few minor league team sets I kept was this 1990 St. Catharines Blue Jays team set. Looks like this set can be bought for around $10 today, so didn't exactly appreciate much. At the time, Steve Karsay got the coveted "front card of the case" billing, and while he went onto a respectable MLB career, getting into 357 games over 11 seasons, he never became the top-of-the-order starter the Blue Jays were hoping when they drafted him 22nd overall in 1990. He's a bullpen coach with the Brewers now.

So yeah, Carlos Delgado eventually broke out as the big name on this low-A squad. Funny to see him as a baby catcher, as he played the vast majority of his career at first base. Delgado and his 473 career home runs were overshadowed by heavy hitters of the day such as Barry Bonds, and unfairly got overlooked for HOF consideration. Maybe if he could have stayed healthy for a couple more seasons and reached 500 dingers, but he was battling a bad hip at the end.

Looking through the set now as an adult, one name I know now (that I didn't know as a kid) is manager Doug Ault. He's got that cool '78 Topps card with Thurman Munson making a cameo. He's best known for playing in the first Blue Jays game on April 7, 1977 and hitting the first two home runs in franchise history that day. After his playing days, he went into coaching, and later ran into life trouble and is no longer with us.

The other familiar name I was pleasantly surprised to see on this coaching staff is Darren Balsley-- a happier story-- current long-time Padres pitching coach. This here is his very first coaching card, having just retired as a player the previous season, so that's kinda cool. 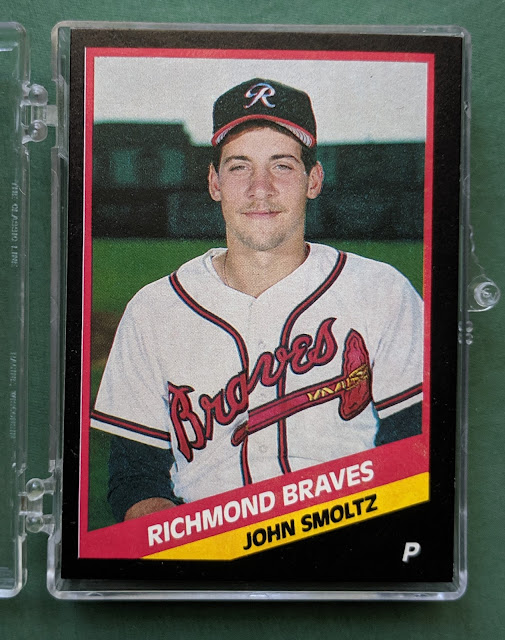 Here's another neat one. I remember having several different team sets from 1988 CMC back in the day, though the Richmond Braves were the only ones I kept. It hasn't turned out to be much of an investment, as a similar set recently sold for $1.25 (+$4.50 shipping) on eBay. But I still always think it's cool to have a minor league card of a Hall of Famer, like young John Smoltz here. 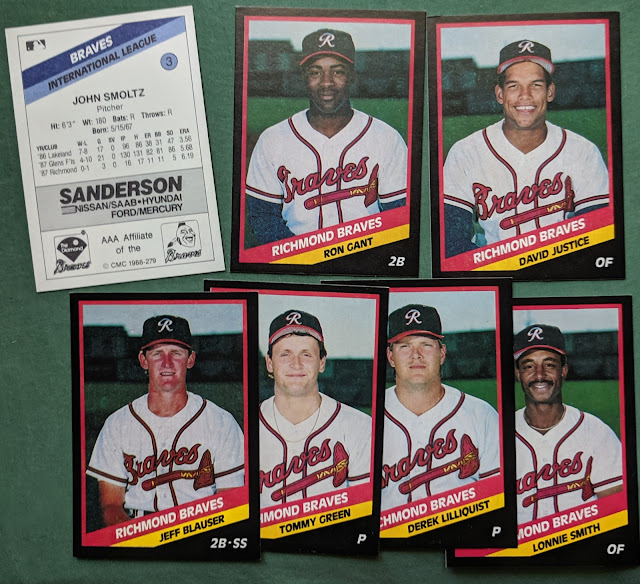 Ron Gant is another guy I collect, and so that card helped me make the choice circa 2008 to hang onto this set and not throw it into the big lot I ended up selling on Craigslist for a very fair price because I didn't want to worry about trying to move it all or bothering trying to break it up into many smaller sales. A few other guys had MLB success in this bunch, too. 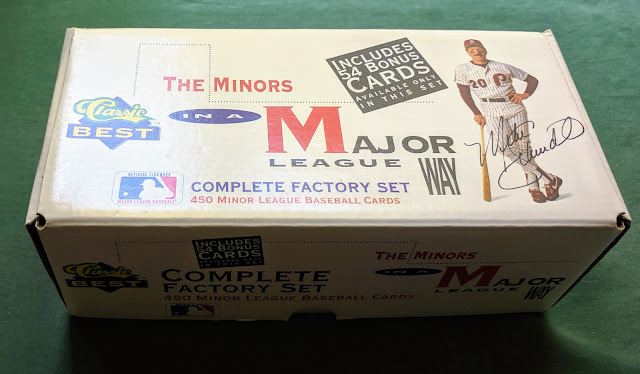 Now this 1991 Classic Best Minors factory set was among my prized possessions during my initial time in the hobby. Loved it! So chock full of promise! I expected a lot of big stars to rise from this set over the mid 90s. And hey, there were Cooperstown-bound Pedro Martinez and Ivan Rodriguez, and future All-Stars such as Reggie Sanders and Brian Giles (my boy Carlos Delgado is in this one, too, and probably other good players I'm leaving out), but the vast majority of the guys in the set never made the big leagues, much less became a star.

I guess Classic Best made of ton of these because now you can find the factory set for under $20 shipped (and much of that price is covering postage). Maybe I should break up this set, keeping my PC guys and getting rid of the rest. But then I'd probably get sentimental over it a few years down the line and have to re-complete the set. 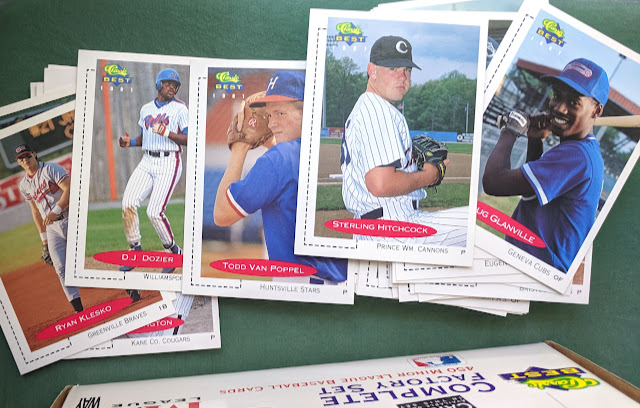 I didn't thumb through the whole set when picking out highlights, but here are a few of the better-known young dudes in there. 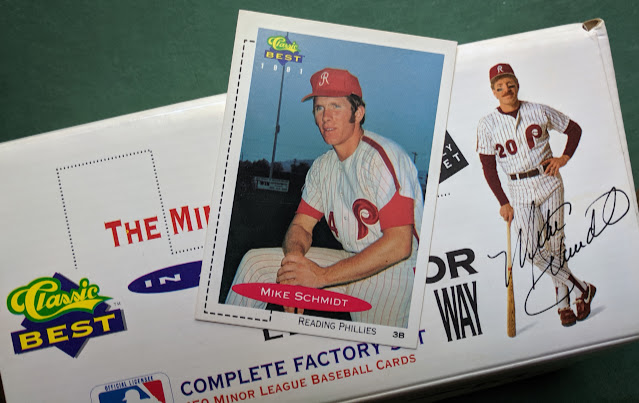 
So there are a few sets I bought as a kid with an eye toward the future. And while they were failures as far as investments, I sure had fun with them and still like 'em today, so no regrets.
Posted by defgav at 3:24 PM