Don't look now, guys, but I've just posted every day for a week! I haven't done that since-- well damn, I don't know, probably 2018 or maybe even 2017. (In fact, if someone has a lot of time on their hands and wants to go thru my blog's archives to figure out last time I posted here for 7 straight days, be the first to leave a comment on this post letting me know when it was and I'll send you a decent prize PWE for your trouble.) It's not like I'm sitting around bored. In fact, I'm a little behind at work (which is now work-from-home for the most part, and so I might be finding it a little harder to focus on job stuff. Really though I suspect maybe subconsciously I just like the thrill of procrastinating till the last moment and then pulling it out at the end. I seem to go that route more than I should. "Why do today what you could put off until tomorrow?" as the slacker saying goes).

Anyways, let's look at another card in this mini "set blog" I'm doing for 1991 Cardboard Dreams, a bizarre oddball set that I felt deserved a closer look.. but is unimportant enough to label as "ignorable filler posts" but that's just to give myself permission to ramble and be silly under the assumption that nobody's reading. I mean, my view count on these posts goes crazy because of the magic word "cardboard", but I know the majority of those hits are just bots. Truth is I don't know how many real people are reading these posts, and honestly I don't want to know. Hell, I hope it's in single digits. But I hope those few readers enjoy the hell out of them! 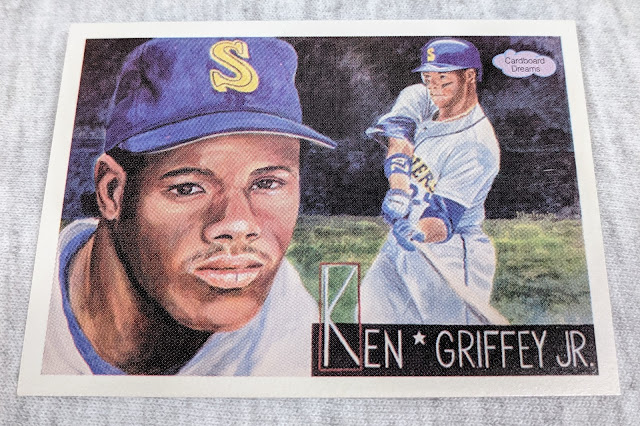 The Kid. I'd say the likeness is pretty good on this one compared to some of the other artwork featured in this 16-card set. Of course, I'm in no position to talk. If I did the above card it would be far-and-away the best sports art I ever created. 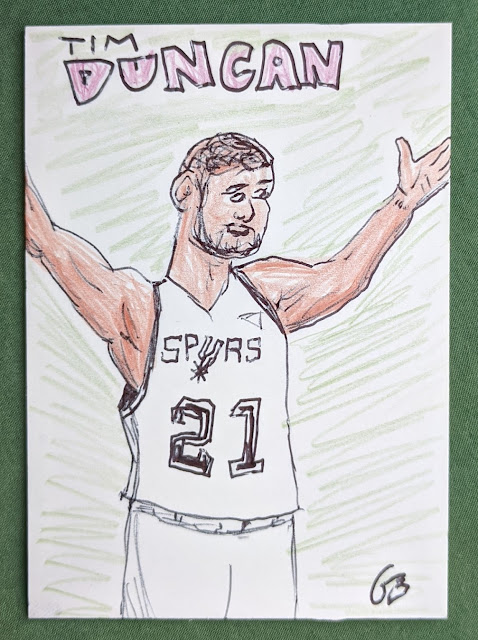 For comparison, here's the latest sketch card I've made. (I know, right?) I sorted my Tim Duncan cards earlier this month, and after I tweeted about it, a random young lady slid into my DMs asking if I had any Tim Duncan cards for sale. Well, the PC is mine-all-mine, but I did end up with enough dupes to warrant a PWE, so I offered them to her for $5 shipped. She agreed, and then I got the idea to surprise her with a bonus sketchcard thrown in, and here we see how it turned out. I'm not much of an artist-- especially have trouble with faces-- but this one isn't too bad. Doubt I could find anyone to pay me for freehand art like this, but I figure it's appreciated as a surprise freebie. 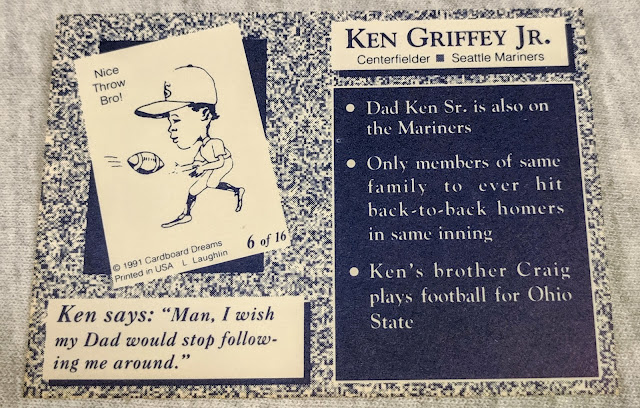 Speaking of sketches that are kinda fun but nothing to write home about, the back of this Griffey has a doodle of him catching a football from his (out of frame) brother.

• "Dad Ken Sr. is also on the Mariners"
Ken Griffey (Sr.) signed with the Mariners as a free agent on August 29, 1990 after being released by the Reds a few days earlier. He was with them through his final game on May 31, 1991 (Age 41). Not sure exactly when these 1991 Cardboard Dreams cards went into production, but apparently it was before June '91.

• "Only members of same family to ever hit back-to-back homers in same inning"
September 14, 1990. Still the only time this has happened-- at least with father & son.. maybe a pair of brothers or cousins have done it since? I believe the only other father and son to be in the same MLB lineup since the Griffeys occurred a few times in early October 2001 when Tim Raines Sr and Jr both took the field for the Orioles (but they weren't back-to-back in the lineup). If you're curious of the outcome of that game with the Griffey back-to-back jacks? The M's lost to Anaheim in large part due to a pair of dingers by Dave Winfield Sr and Dave Winfield Sr. But it's still a warm & fuzzy moment for MLB regardless of Big Dave's disrespectful 2-tater day at the plate. 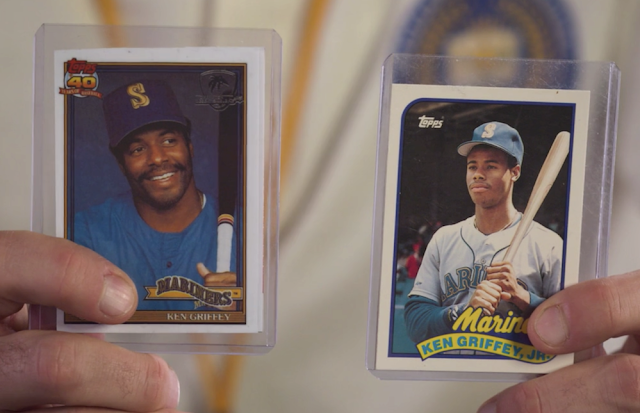 The sitcom Schooled recently referenced the back-to-back feat, and even gave screen time to a '91 Topps (Desert Shield!) card of Sr (is it real? top edge seems wonky) and an '89 Topps Traded rookie card of Jr.

And speaking of such things, I should mention the List of Baseball Cards in Movies and TV has recently been updated for the first time in a few months. Check it out if you wanna. I try to change the sidebar image link everytime I update the list, so when that changes, it should tip you off that there's been a significant update. But you might not see it if you read on your phone. I'm curious of the splits between readers using a full-sized web browser and readers on a phone. Is there anywhere in the Blogger dashboard to find that info? I know some blogs tinker with their layout to make them more compatible with phones these days, but I like my layout the way it is and don't plan to make any drastic changes in the foreseeable future.

As far as pitting father against son.. Senior has the edge with career batting average (.296 vs .284), but Junior has well more homers (630 vs. 152). The elder Griffey has bragging rights with two WS rings, though (with those Big Red Machine teams of the mid 70s), while Junior never made it to the Fall Classic.

• "Ken's brother Craig plays football for Ohio State"
Craig was a late draft pick by the Mariners in 1991 and played minor league ball for a few years, making it as far as AAA for 3 games in 1997. Craig had a few cards during his career, most notably a '92 Upper Deck "Bloodlines" card posing with his dad and brother.

Despite the drawing on the card back, Craig never went far with football... but speaking of gridiron Griffeys, Junior's son Trey Griffey (b. 1994) is pursuing a career in the NFL, though hasn't had much success getting into any games yet. But hey, even just being a practice squad member of an NFL team is quite the accomplishment! And you gotta assume he's set financially from the family money.

Hey, going back to talking about stuff we created, here are some customs and gifs I've whipped up recently (I'm better in Photoshop than drawing). If you follow me on Twitter, you might've already seen them. But if you missed them (and/or don't do Twitter), here ya go! 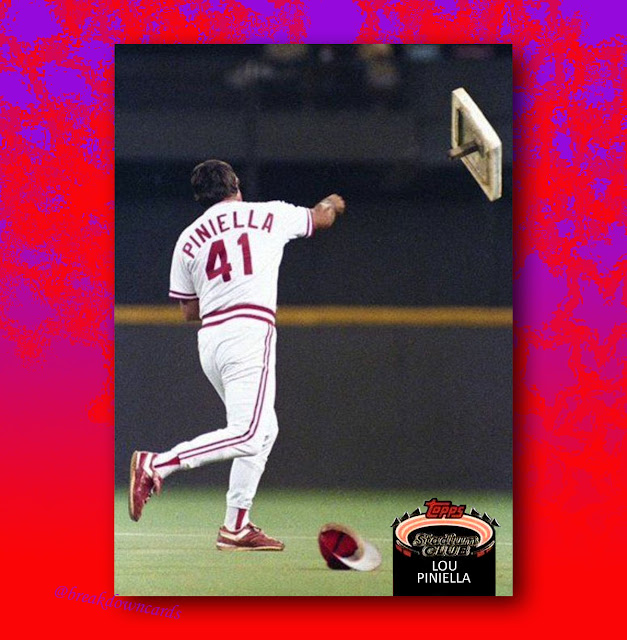 Love this kooky custom of Lou Piniella on a 1992 Stadium Club card!

Oh, as for artistic expression, I should mention I made that background myself. I like it! I also just finally figured out how to do the drop-shadow effect on the card there. Yeah, maybe I'm not exactly the Photoshop master I make myself out to be, lol! But yeah, expect more drop-shadows from me in the future.


That was a fun gif. And yeah, another dumb fine background I made. I just like using backgrounds like this to help the card stand out, especially on Twitter where they trim off your edges. 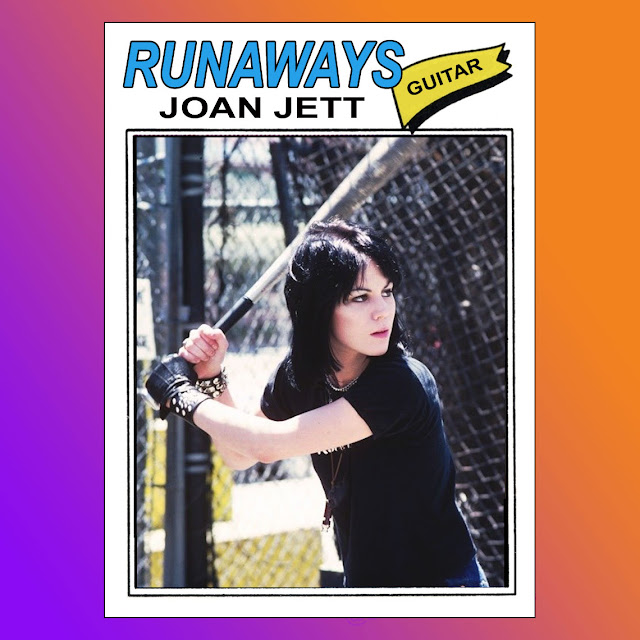 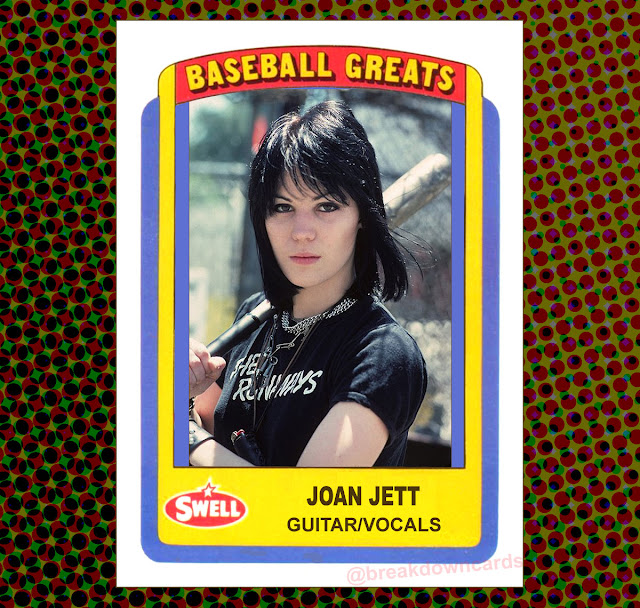