Getting interactive with Netflix

We watch a lot of Netflix at my house, with ever a long instant-play queue. Netflix is always adding and removing stuff, and they'll usually give you a couple weeks or a month heads-up when something is being taken off streaming. One particular game we play is "watch all the exiting shows/movies before they go away". While it sucks to have a batch of things in the queue pop up with the dreaded red date next to them, it sure is fun to try to burn through what you can before it's too late. Sometimes you feel the thrill of victory as the end credits roll on the last red-dated title. Other times, it's the agony of defeat as the red date arrives before you get around to watching, and the title disappears from your queue, never to be seen again. (No, that's not true; titles return to streaming sometimes. Plus there's the option to rent the DVD if you really want to see it.)

But anyways, once such movie I watched recently was Hoop Dreams. Roger Ebert said it was the best film of the 90s. I wouldn't go that far, but it was an interesting look into the lives of a couple b-ball hopefuls.

While I was watching, I searched around online and found that (spoiler alert! highlight to reveal) neither kid ever made it to the NBA. I also took a look on eBay for autos, and came away with a certified signed card each of both William Gates and Arthur Agee, the stars of the documentary, from their collegiate days. 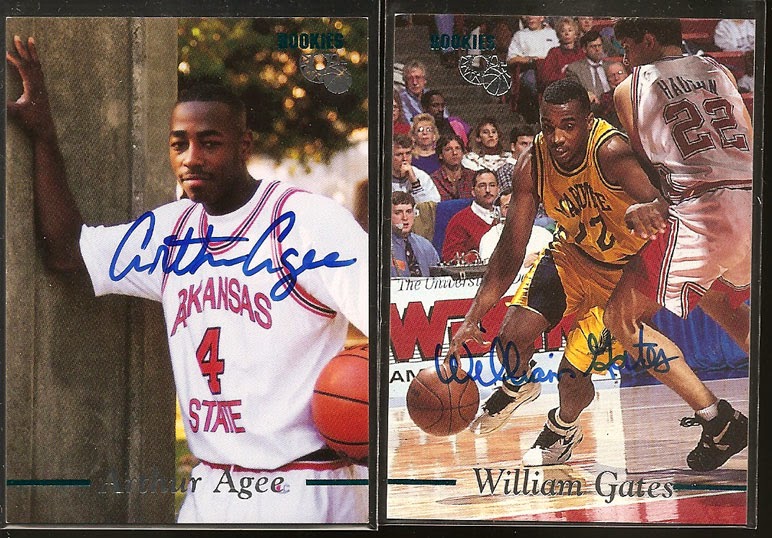 These set me back $7 shipped ($3 for Gates, $4 for Agee). Still not a huge basketball collector, but neat pop culture stuff like this is always fun to throw in the collection and make you feel "closer to the story".

I think the Gates is my first ever Marquette card. I really am not a college sports guy at all. The only school that really registers on my "fan meter" at all is San Diego State University for simply being my alma mater. But I suppose Marquette might tickle the meter slightly, since that's where my mom went to school. Bloodlines, n' all.

Gates is #'d 1729/3290, while Agee is #'d 544/3285. Those numbers are pretty meaningless today, but still, it's nice of Classic to bother, I suppose. Both guys' signatures are incredibly legible after signing hundreds of times. Nice work, gentlemen.

Major League is another film that was taken off streaming a few days ago. That was cool watching it for the first time in years. Of course there are actor autos from that movie in this year's Archives. They're a bit pricey still, but those would be fun to collect.

Anyways, now I'm off to catch some Mythbusters, being taken off streaming after today. Bummer! I wonder if there are any Mythbusters trading cards out there.
Posted by defgav at 9:39 AM