Speak up for 2015 Archives Fan Favorites

Back in May when I giddily discovered Bip Roberts had an auto in 2014 Topps Archives, I posted the question..


Who is a neglected favorite player of yours from the past that you would most like to see included in a current set? We're talking fan favorites who've been retired for at least a few years, who have very few-- if any-- certified autos out there. 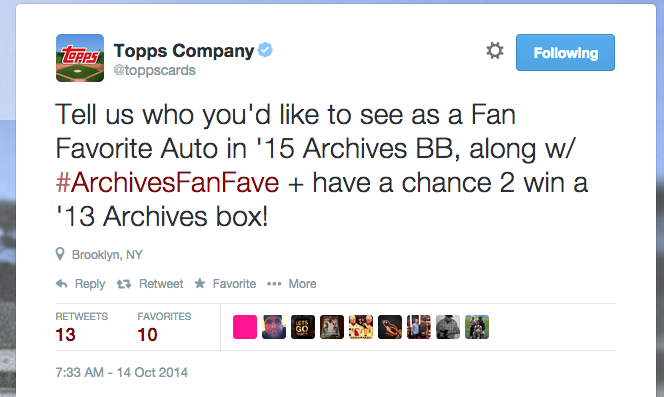 So if you're on Twitter, now's a good time to try to make your voice heard! (and enter a contest for free cards in the process!)

Personally, I pretty much maxed out the amount of characters Twitter would let me use in my response:

I didn't spend a ton of time thinking it over, but I feel good about my suggestions, as those are all dudes I like that don't get much certified-auto love these days. Hopefully the guys at Topps actually take a good look at the responses, and perhaps even make a couple of these a reality. Obviously a lot of the folks replying don't get the concept of Archives Fan Favorites, and are suggesting current players and top-tier HOFers.

Anyways, today should be a nice mail day. Freakin' Columbus Day pointlessly delaying cards from being delivered to my mailbox! :( Abolish Columbus Day!

I sent out a bunch of PWEs on Sunday. The automated postage machine was on the fritz, and the only thing it would do was print postage (scale wasn't working). I took a guess that 70¢ stamps would be enough for each envelope, and bought a few. So hopefully they all reach their destination without a hitch.

Hey, speaking of Archives Fan Favorites autographs, let's close this post with one I added to my collection recently.. 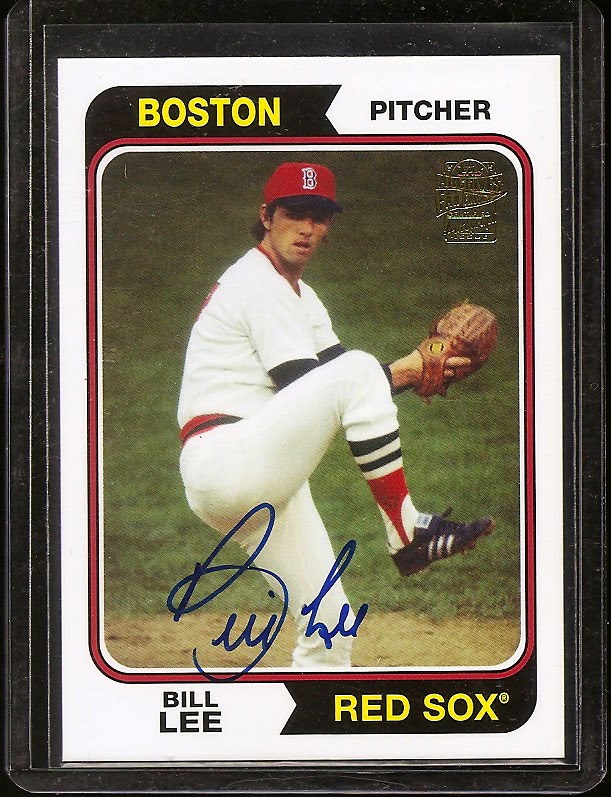 Bill Lee is quite a character. Glad to add an auto of Spaceman to my collection. I think this card is from 2013 Archives. He has another one in the style of 1973 Topps (I believe from 2012 Archives) which I liked more, but this 1974 style card was cheaper, so it won out. Maybe someday I'll pick up the other one too.
Posted by defgav at 8:46 AM

Email ThisBlogThis!Share to TwitterShare to FacebookShare to Pinterest
Labels: Archives