Just got a Pepitone* in-person auto!


Last night my wife and I went to a comedy club and had a great time. The comedians were Sean Jordan, Amy Miller, and headliner Eddie Pepitone. If you're not into "alt comedy" you might not know the name, but chances are you've seen him in something. He's been on Conan O'Brien a lot. I know him best from the Sarah Silverman Program, but yeah, he's been in a lot of stuff, in his distinct lovable ranting old-guy style.

I haven't laughed so hard in a long time. In you're into comedy that's not afraid to yell at you, you should definitely follow him on Twitter (@eddiepepitone) and catch him live when he comes to your town. Highly recommended.


(That clip is my wife's favorite bit.)

You old-school baseball fans will no doubt think of Joe Pepitone when you hear that last name.

Well, a few weeks ago when my wife suggested we check out the show, I got the idea it'd be fun to get Eddie to sign a Joe Pepitone baseball card for me. I'm happy to say that plan was realized perfectly. We hung around a few minutes after the show and got to meet him for a minute and he was super cool. He got a kick out of the Joe Pepitone card and told a quick story of how as a kid back in New York (When Joe was on the Yankees), he used to lie and say he was related to him, until one day the other kids wised up and put him on the spot when he couldn't ever deliver any bats, balls, etc to prove it.

But yeah, he was totally cool with signing the card, and I'm now the proud owner of a Joe Pepitone card signed by Eddie Pepitone. 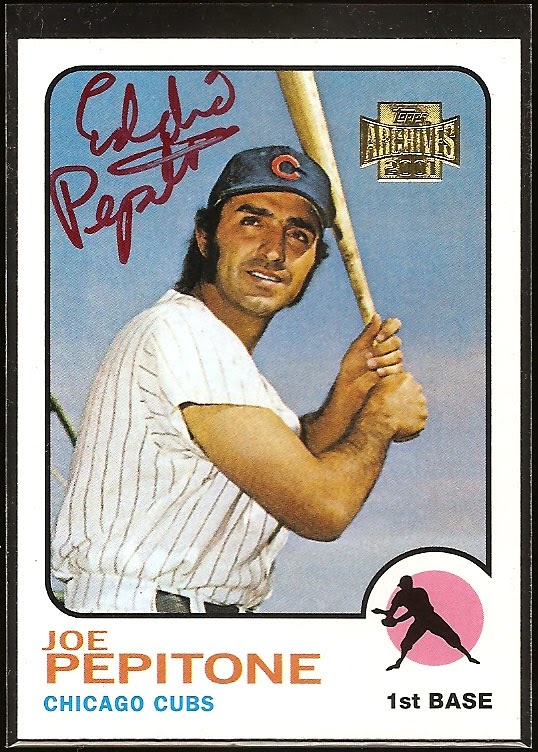 That's a high level of Pepitone on one quirky piece of cardboard! Love it!

This 2001 Archives card was the cheapest Joe Pepitone card I could find on eBay (a buck-something shipped), plus I needed it for my 2001 Archives setbuild, so I figured even if the autograph plan didn't pan out, at least I'd have a card to check off my needslist. (But as it stands, I still need another copy for my set now.)

Believe it or not, this is only the second time in my life that I've had somebody sign a baseball card for me.

Maybe I'll branch this off into a silly minicollection and get other comedians to sign baseball cards of players with the same last name. I have a stand-up buddy named Joseph P. Larkin I could try to get to sign a Barry Larkin card, for example.

Thanks again, Eddie! Love you! And thank you for stopping by and reading my little tale. Have a great weekend and watch a bunch of playoff baseball.
Posted by defgav at 9:36 AM