Trading away a 73 Topps need for the greater good

When I got Hoyled with some 73 Topps team checklists a couple weeks ago, Jim, a.k.a. non-blogging cardosphere legend Mr. Haverkamp inquired if the Mets checklist was unchecked, as that was the last upgrade he needed for his set.. and he offered some good stuff to make it worth trading away. And sure enough, the Mets boxes were clean on the back. So I got the fuzzy satisfaction of helping a fellow collector put the final nail in 73 Topps, and I got some great cards back, including Jim's old (checked) Mets checklists, and an unchecked Angels checklist, plus some manager variations and more. 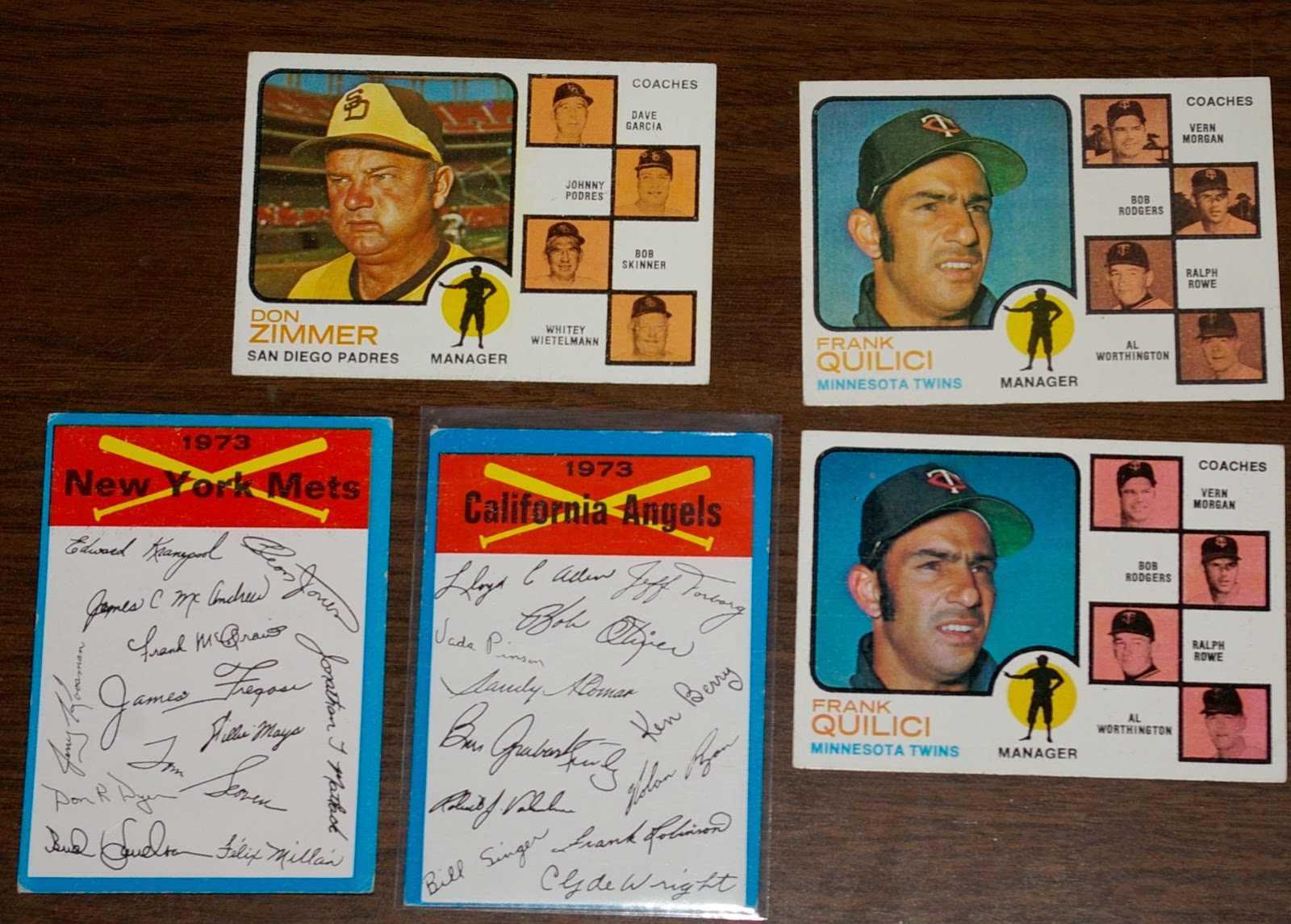 That pair of Frank Quilici cards does a good job demonstrating the variation that many of the manager cards have. Note the differences in color and trees in the background of the coaches' photos.

I've never really been a fan of facsimile autographs on cards, so I like that 73 Topps kept them off the player cards, and instead relegated them to the unnumbered team checklist that you had get via mail-in offer. It would be pretty cool if those were real autos, though.. with the cards above featuring Nolan Ryan, Tom Seaver, and Willie Mays back when his signature actually looked like his name, before it morphed into doodles of fish.

Some surprise Padres thrown in! That 1987 Fleer Update Kevin Mitchell is a card I've been wanting for a while. I believe it's the only cardboard documentation of his very brief stint on the Padres between coming up with the Mets and developing into a star with the Giants. And it's crazy/cool that Fleer went through the trouble of including photos from both stops. I can't recall any other instance of a card company doubling down on a traded/update card like that. (Please school me in the comments if I'm wrong.)

And I have no memories of James Steels, the player, but those yellow 1987 Bohemian Hearth Bread cards always strike a nostalgic chord with me, as they're among the earliest cards I ever owned as a kid. Long before I ever bought a pack of baseball cards, I somehow wound up with a few of these Padres oddballs. Maybe I'll work on completing the set one of these days. --Ok, searching for them on eBay just now reveals they're not as cheap as I would have thought ($75 for the complete set of 22 cards?! $15 for the Gwynn?! Yeesh.)

And hey, correcting myself from a moment ago, there is in fact a Kevin Mitchell-as-Padre card included in that regional bread set! (It's now replacing his 87 Fleer Update card in my Desperate Dozen sidebar wantlist.)

Anyways, yeah, if you've got any of these yeasty, yellow beauties laying around, I'd be interesting in trading for them.

For the record, James Jim Steels stole 5 bases at hit .180 in a lackluster career the lasted 149 plate appearances over 3 years in the late 80s. He went on to much better success playing in Mexico, becoming the first 30-30 man in Mexican League history in 1991.

And now for the surprise highlight from Jim's package: 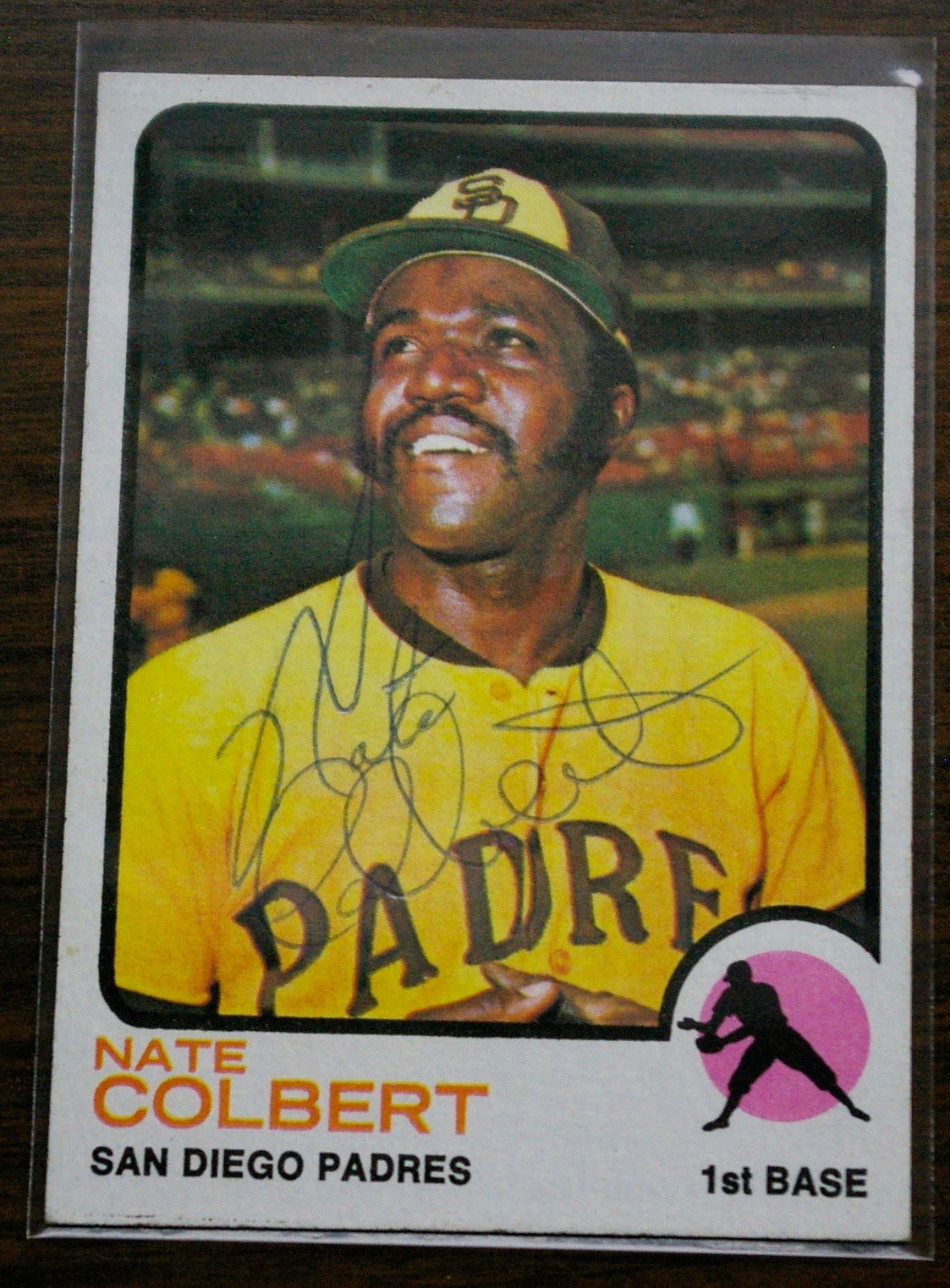 A signed 73 Nate Colbert! Awesome! I haven't filed a Nate Colbert Report on the blog for a while, but I've picked up a few additions here and there since last time. But losing out on a Topps Vault auction for a sweet unused color negative of Nate Colbert a while back made me question my lifechoice as a Nate Colbert supercollector. Letting that negative slip away for $40-or-whatever-it-was really humiliated me, and with shame in my heart, I renounced my supercollector title. I'm still a big Nate Colbert collector, though. Just not a supercollector.

Anyways, I love this card. Thanks for the incredible bunch of cards, Jim! I'm glad I could help you complete your 73 Topps set, and appreciate you helping me out with mine.
Posted by defgav at 4:00 PM